Observation Notes on the Variability of Two Blues 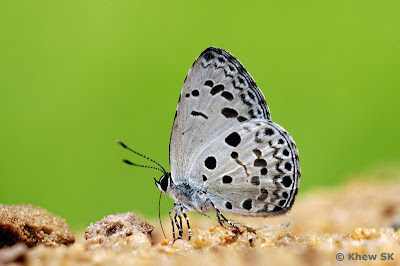 A typical Common Hedge Blue with its full complement of spots and streaks in the usual arrangement
From the large number of photographs taken by ButterflyCircle members of two common Lycaenidae species - the Common Hedge Blue (Acytolepis puspa lambi) and the Cycad Blue (Chilades pandava pandava), there have been many occurrences of interesting variations of the spots and streaks on the underside of both species. Whilst in most cases, we would consider these as variations in the markings, we observe that in some individuals the variations are so marked that it would be more accurate to consider these aberrations. 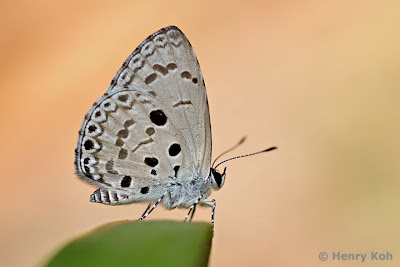 Firstly, we will take a look at the high variability of the Common Hedge Blue. A relatively common species that can be found in urban parks and gardens as well as along open trails of the nature reserves, this butterfly is shining blue above with narrow black margins in the male, but is paler with broad black borders in the female. The underside features a series of black spots and streaks.

The variability of the underside spots and streaks of the Common Hedge Blue is the subject of discussion of this article. The variations range from the size of spots, the alignment of the spots and streaks, as well as the presence or absence of these features.

In the first series of shots below, we examine the arrangement of some of the key spots and streaks on the underside of the species. The grey streak at the end of the hindwing cell in relation to the spot adjacent to it can vary between being almost contiguous to distinctly separated. In certain individuals, the spot is even missing. 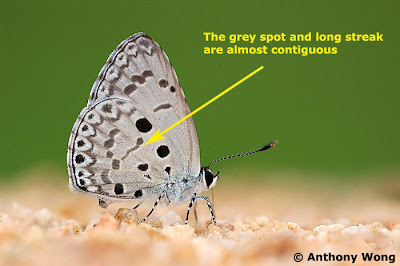 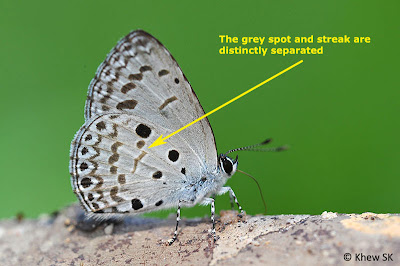 In this example, the grey streak and spot are slightly separated 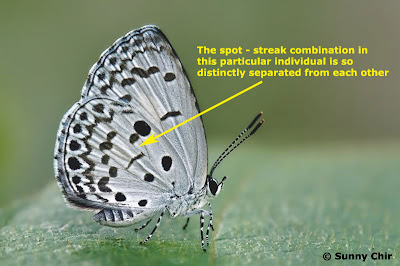 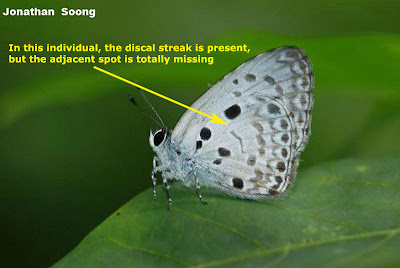 In this individual, the grey discal streak is present, but the adjacent spot is missing altogether

Another series of variations involve the location and sizes of the various spots. Some are large and distinct, whilst others are small and inconspicuous. In some cases, there are extra, or even missing spots. 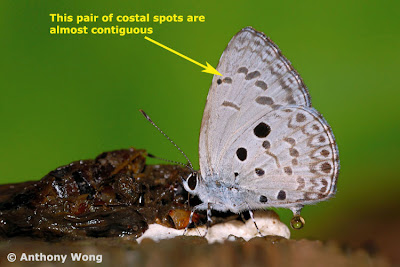 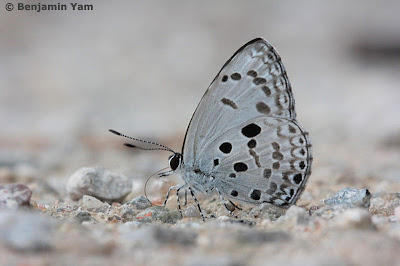 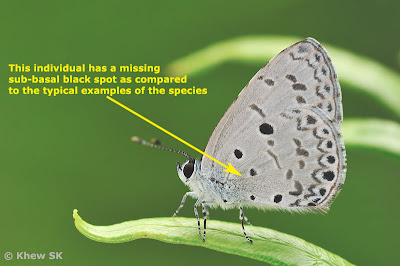 Compare the size of the spots of this individual with the typical one above, and note the missing small sub-basal black spot. Also note the relative sizes of the spots and streaks.

In yet another example, the marginal spots are indistinct and the fuzzy markings of the submarginal spots give it the appearance of a thick grey band. Note that the grey spots on the underside of the hindwing are very indistinct and small and some features are missing. The overall appearance of this individual may give the impression that it is a totally different species! 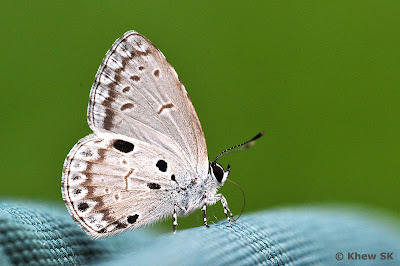 The indistinct marginal spots and the fuzzy sub-marginal band makes this individual of the Common Hedge Blue appear as though it is a totally different species!

The last example shown here is an extreme case of aberration where the characteristic spots at the costal region of the hindwing are conjoined to form a thick black marginal band. This could be related to a phenomenon known as melanism. 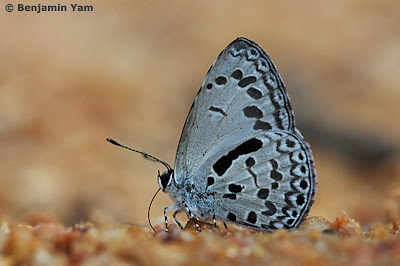 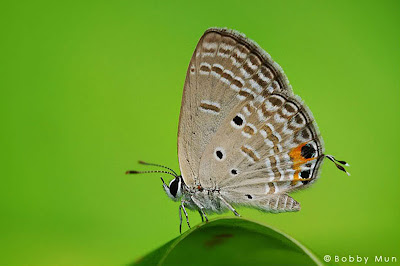 A typical Cycad Blue with its full complement of spots and streaks on the underside of the wings. This is the most common "variant" that is featured in reference books
In this species, we also see a display of variability of the spots and streaks that are featured in a typical example of the Cycad Blue. The Cycad Blue is a common butterfly, and is usually found in the vicinity of its host plant, the Sago Palm (Cycas revoluta). The caterpillars of this species is considered a pest of this plant, that is commonly used in ornamental horticulture.

The upperside of the male is light purplish-blue with narrow black margins and a prominent tornal spot on the hindwing. The female has broad boarders and is a paler blue above.

Like in the preceding species, the Cycad Blue has also been observed to have a variability in the range of individuals photographed, albeit slightly less dramatic than the Common Hedge Blue. In many cases, there are extra, or missing spots on the hindwing below. The size of the spots and streaks are also variable. 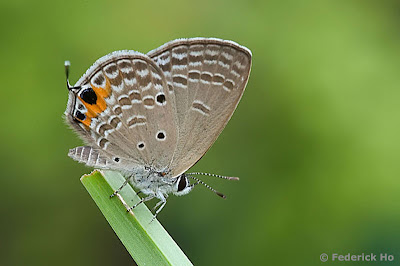 From the many examples that ButterflyCircle members have photographed in the field, we can separate the variants into 2-, 3- and 4-spotted examples. The spots in question being the black, almost circular post-basal spots on the underside of the hindwing. 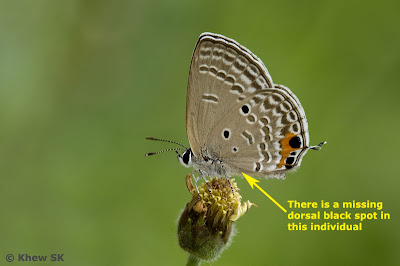 A individual with the dorsal black spot missing. This is an example of a "Two-Spotted" variant of the Cycad Blue 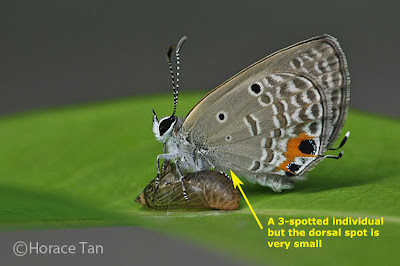 A "Three-Spotted" variant, but with the dorsal spot very tiny, almost imperceptible 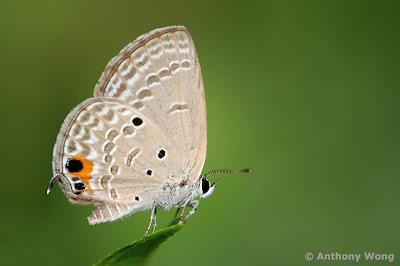 A typical "Three-Spotted" variant, which displays the 'standard' appearance most commonly found in the Cycad Blue 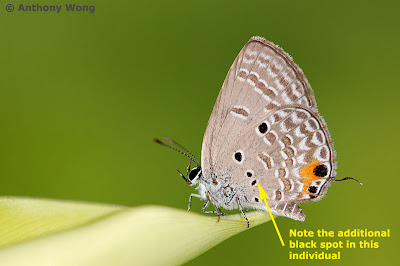 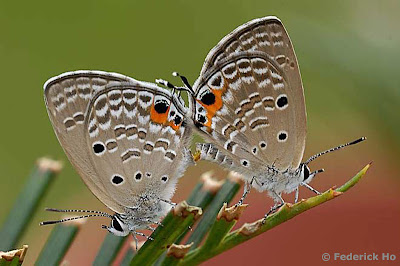 A mating pair of the "Four-Spotted" variant. What is unique about this photo is that both the male and female are "Four-Spotted"!
The most extreme example that we have come across is where the costal spot is so enlarged as to appear like an elliptical patch, and the usual three post-basal missing. Again, at a glance, an observer may be forgiven, if he had assumed that this was a totally different species altogether! 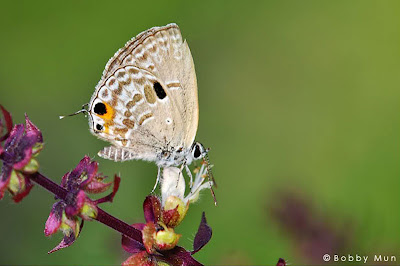 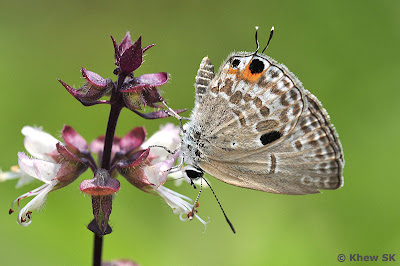 Two shots of the same individual of a rare aberrant Cycad Blue where the apical black spot on the hindwing is large and elongated, and the post-basal spots are missing
In the separation of different species of butterflies where a slight shift of a spot here and there, or the absence or presence of a spot or streak, would distinguish a different species, the variability in some species of Lycaenidae will add confusion and the occasional challenge to the identification of a butterfly, particularly through field observations and photography.
The discussion in this article shows the wide range and variability of the physical distinguishing features of two Lycaenidae through aberration and melanism. Perhaps these could be distinctly different species? If anyone out there who reads this can shed additional information on this, please feel free to post a comment on this thread to share your knowledge.