The Urbanites
Butterflies in urban habitats 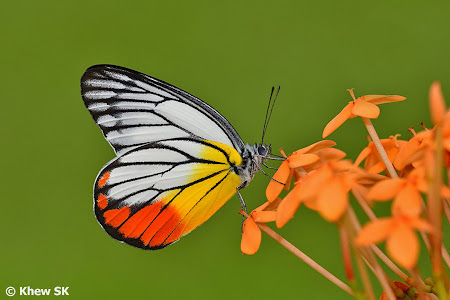 Just a couple of days into the new year, I was driving along a major road in Singapore's Central Business District. Despite being in the heart of the city and in a highly urbanised and developed area, the roads were lined with lush trees and landscaped verges. The road side-tables were planted with low flowering shrubs and verdant vegetation. Such is Singapore - the City in a Garden. 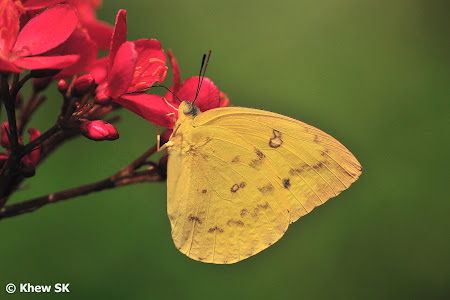 An Orange Emigrant, one of the species that can be spotted in urban built-up areas


My colleague suddenly called out "look, there's a butterfly fluttering across the road!". And there we have it, an orange butterfly was darting between the moving cars, maneuvering effortlessly towards the treetops of a roadside Scrambled Egg Bush (Senna surattensis) with its bright yellow flowers and lush green leaves. This was an Orange Emigrant (Catopsilia scylla cornelia) and it was probably flying around its caterpillar host plant to look for a good place to oviposit. 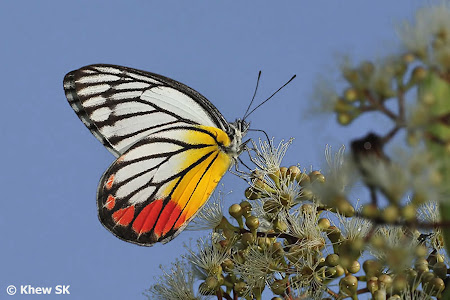 
As we stopped at the traffic lights, my eye locked on to a whitish butterfly flying near the treetops some 10m away. I instantly recognised its slow and easy-going fluttering that it was a Painted Jezebel (Delias hyparete metarete). It was also probably looking for its caterpillar host plant, the Malayan Misteltoe (Dendropththoe pentandra) a parasitic plant that often grows on trees and other bushes and propagated by birds. 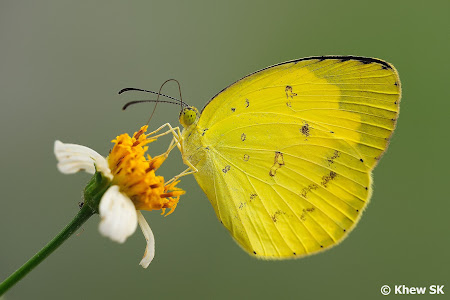 
This was in downtown CBD and we can still occasionally see some butterflies fluttering around the vegetation in the urban areas of Singapore. This weekend's blogpost takes a look at some of the species that you may be able to spot in the urban areas of Singapore, and you do not have to go to the parks, gardens or nature reserves to see some butterflies in Singapore. So what are these "urbanite butterflies" that we can sometimes encounter in the heart of the developed areas in Singapore? 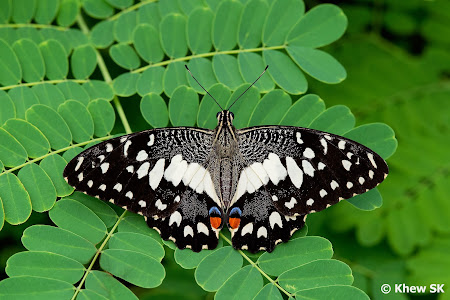 One of the more often-spotted Swallowtails in our urban areas, is the Lime Butterfly (Papilio demoleus malayanus). This species is very widespread and its caterpillars are sometimes considered a "pest" to cultivators of the Calamansi Lime and other types of Lime plants. I recall seeing a Lime Butterfly in the middle of Singapore's Chinatown, fluttering around a few pots of Lime plants that were placed outside a residence. 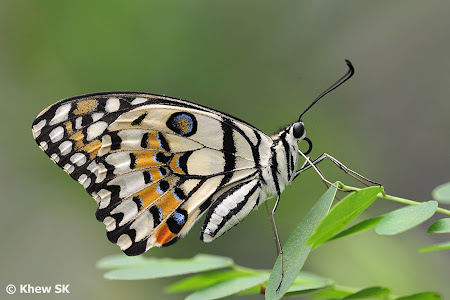 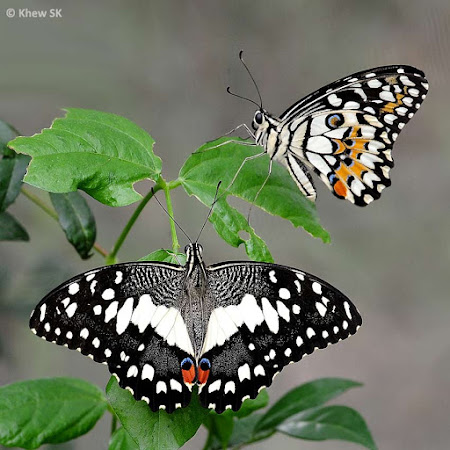 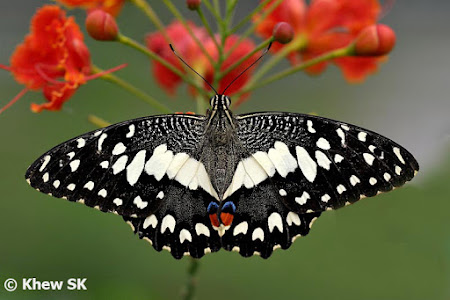 We have had reports of caterpillars found on a potted Citrus plant on the 13th storey of a high rise (HDB) residential apartment in Singapore. The owner was quite certain that the plant was over a year old (implying that the caterpillars were not stowaways on a new plant and brought up to that height). The potted plant was placed along the common corridor of the apartment, suggesting that the visiting female Lime Butterfly flew up to that height (about 40m high) to oviposit on the host plant! 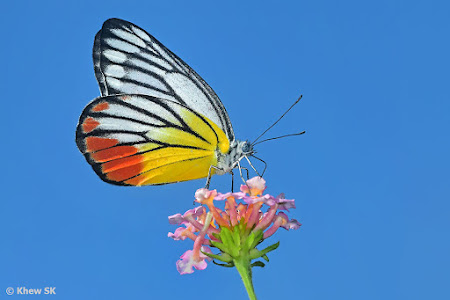 The common species can often be spotted flying restlessly amongst the treetops in our urban areas. Its caterpillar host plant, the Malayan Mistletoe, grows wild on many trees and shrubs and is sought after by the Painted Jezebel. As it is distasteful to predators and and displays aposematic colouration, it has an unhurried flight and flutters gently amongst the vegetation. 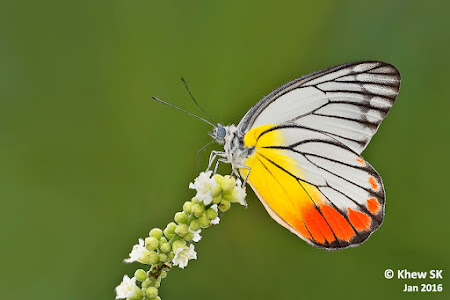 The wings of the Painted Jezebel are white above, with the veins prominently black-dusted in the outer areas. The female is more heavily dusted with black, more so on the upperside than the underside, than the male - appearing almost dark grey when in flight. The basal half of the underside of the hindwing is bright yellow with a bright red marginal border and crossed with the contrasting black veins, giving it an attractive and colourful appearance. 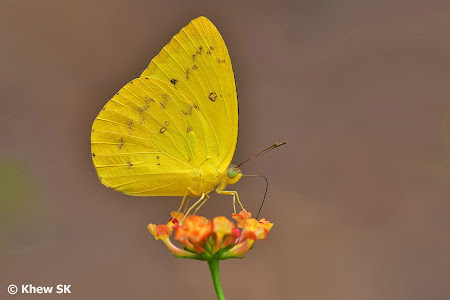 This fast-flying Pierid can often be seen flying across major roads and even expressways near its caterpillar host plants. The Orange Emigrant is relatively common in Singapore, and can be found in urban areas, parks and gardens and nature parks. 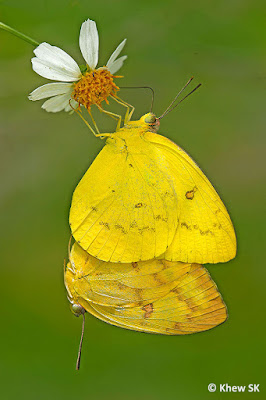 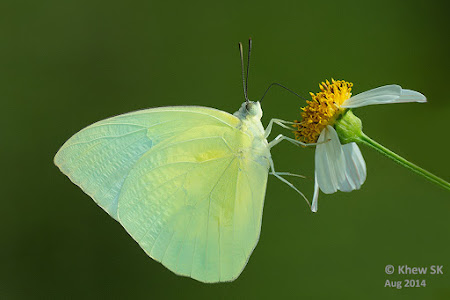 A close relative of the Orange Emigrant, the Lemon Emigrant is also another "urbanite" that can be seen in downtown Singapore. Where its caterpillar host plant is grown as a roadside tree, the Lemon Emigrant can regularly be seen flying at tree top level. The Golden Shower (Senna fistula), Seven Golden Candlesticks (Senna alata) and Siamese Cassia (Senna siamea) are cultivated as roadside trees and feature plants in urban gardens. These plants attract the Lemon Emigrant to seek out fresh leaves to oviposit. 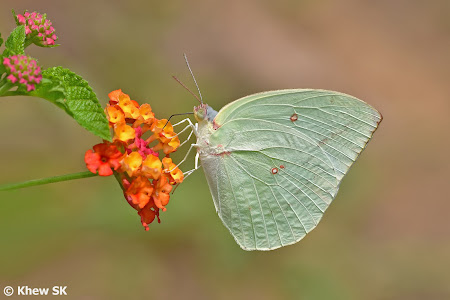 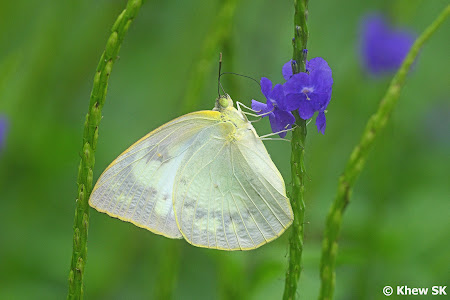 The ground colour of the Lemon Emigrant ranges from pale green to a deep orange yellow, with varying widths of black borders on both wings, depending on the 'form'. The butterfly is fast on the wing and skittish. They can sometimes be seen flying across the urban pocket-parks in downtown Singapore. 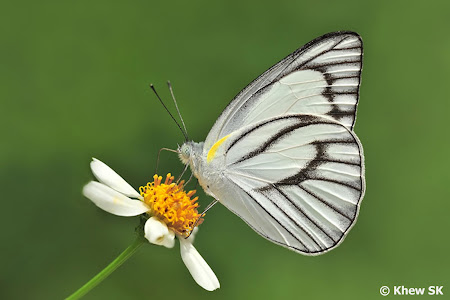 The Striped Albatross is another common Pierid that is sometimes seen in HDB gardens and urban parks. One of the sexually dimorphic species, where the male and female look quite different from each other. This fast-flying species' caterpillars feed on the Purple Cleome (Cleome rutidosperma), which is a common roadside wildflower that pops up whenever there is a patch of unkempt grass verge. 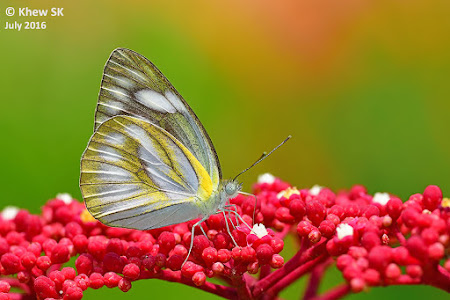 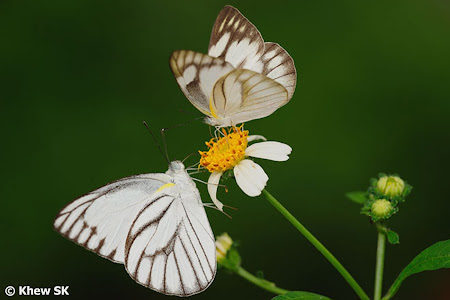 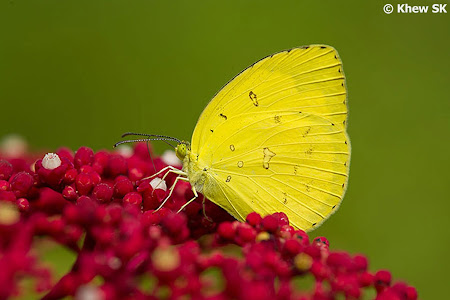 The last of the "urbanites" is the Common Grass Yellow. Although there are 6 lookalike species in Singapore, it is highly likely that the small pretty fluttering yellow butterfly that we see in urban parks and gardens is this species. I have seen the Common Grass Yellow fluttering around a pocket park in the heart of the CBD, where one of its host plants, the Peacock Flower (Caesalpinia pulcherrima) is cultivated. 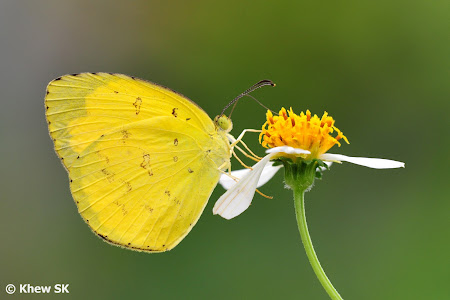 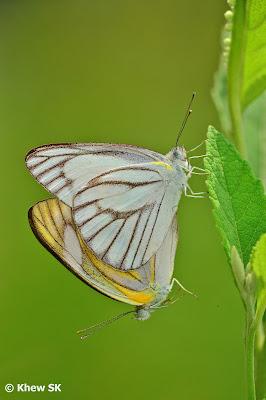 And so we have taken a look at some of the more common urban species that an observer can find int the heart of the Lion City. I am sure that there will be others, but these are the most likely species that you may encounter, even if you are in a built-up urban part of town.

Posted by Commander at 6:44 PM