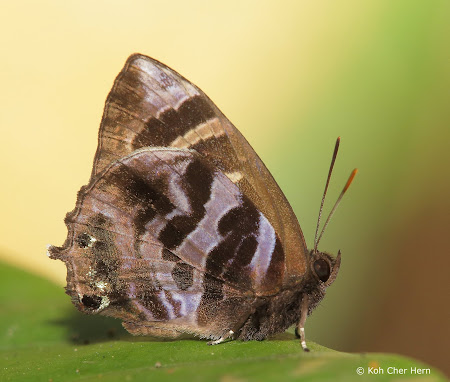 A Shining PlushBlue perched on a leaf in the nature reserves


August is always a special month for Singapore. This the the month where Singaporeans celebrate our National Day (our "Independence Day") on the 9th of August each year. This year, Singapore will be 52 years old. The city state has come a long way from independence in 1965, when it separated from Malaysia to stand alone as a sovereign nation. On 9 August 1965, the Malaysian Parliament voted 126 to 0 (with Singaporean delegates not present) to move a bill to amend the constitution providing for Singapore to separate from the Federation of Malaysia 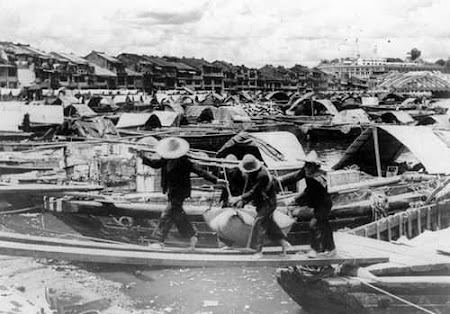 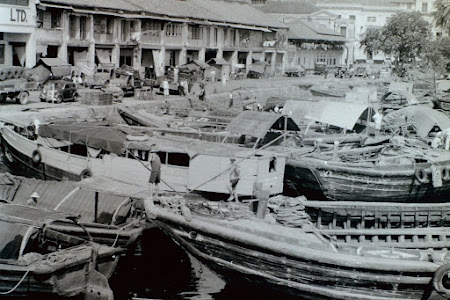 © Mike Robbins
Old Singapore River scenes - The Singapore River was the source of commerce in the old days, where ships unload their goods onto smaller 'sampans' which then move the goods to the godowns along Boat Quay for sorting, storage and eventual move to their end destinations.
Back then, our pioneer generation must have worried about the survival of this little island, with no resources, no hinterland and a motley crew of labourers from Malaysia, India and China who had to build the future of Singapore with their enthusiasm, hope and conscientiousness. The early years after independence were turbulent, with labour and racial riots breaking out after periods of tension, conflict and social unrest. 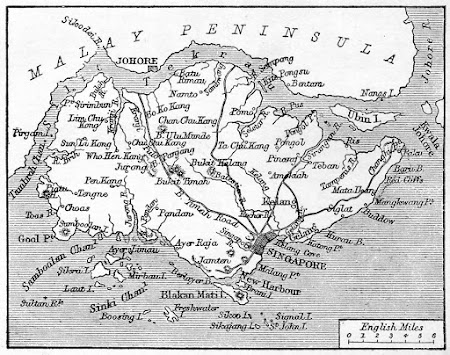 By common logic, Singapore should not have survived. Without any natural resources, land to cultivate its own food and having its own source of fresh water, many outsiders would have wagered that Singapore would fall and be re-absorbed into Malaysia after a short time. However, beating all odds and to the skeptics' surprise, the grit and determination of our pioneer generation built Singapore from 3rd world to 1st in two to three decades, rising to one of the world's highest GDP per capita. 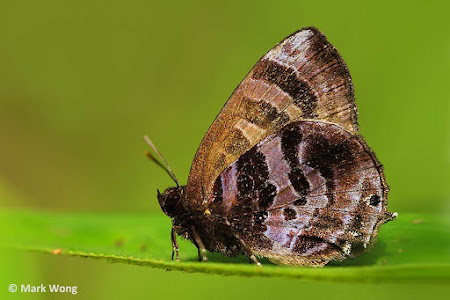 I came to Singapore in 1979, the early years of a nation that was in a hurry to grow and reach for the stars. My first job in the civil service in the government's engineering authority allowed me to be part of Singapore's nation-building effort in the 1980's and 90's. As an architect in the now-defunct Public Works Department of Singapore, I had the opportunity to be involved in the design and implementation of many of Singapore's social infrastructure projects like schools, polyclinics, government buildings, army camps and even prisons! 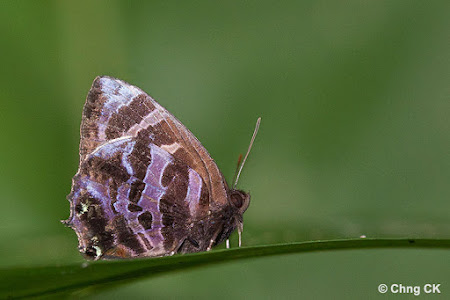 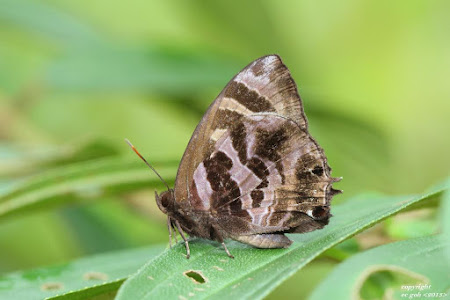 Those were very special years for every architect and engineer in our industry because of the wealth of experience that each of us acquired through our projects. The wide variety of building typologies that we had to design (many from scratch, because of our own unique systems and operational policies) allowed us to build our professional experience that would be hard to replicate today in a matured and fully-developed Singapore. 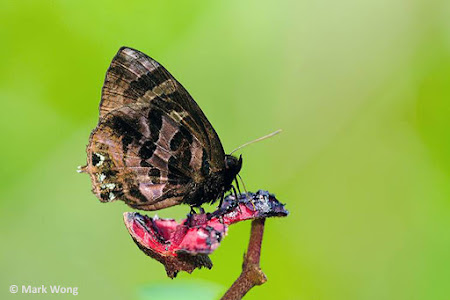 From educational buildings to recreational facilities ; from Ministry headquarters to hospitals ; from airports to police stations, we did them all. There were not many foreign consultants involved in the 80's as we could not afford too many of them. Each government professional learnt by studying available literature, went on overseas study trips and interacting with more experienced seniors in our organisations. The experience gained was priceless, and embedded in each of us to this day, even though the government department that we were once part of, had been totally privatised. 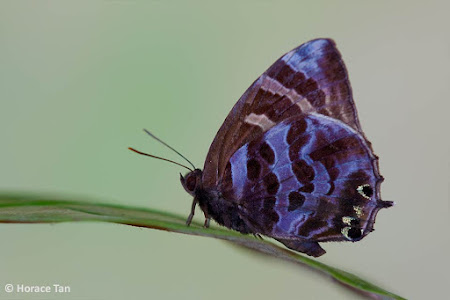 Back in those proud nation-building days, each Singapore National Day was special, as our late Prime Minister Lee Kuan Yew shared the accolades and the achievements that made Singapore grow stronger year after year. My favourite National Day songs were "Count on Me, Singapore" and "We are Singapore" and listening to them today still brings back memories of an era when we worked hard for, and contributed to Singapore's progress. 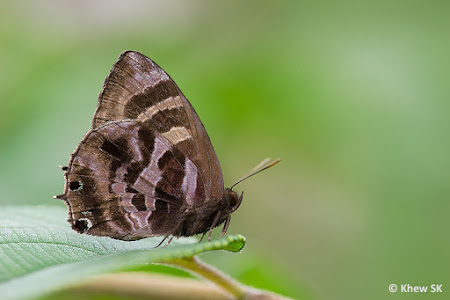 Our Butterfly of the Month is therefore aptly selected for its subspecies name that carries the Singapore name, on our 52nd National Day. This month, we feature the Shining PlushBlue (Flos fulgida singhapura). The English name for Singapore is an anglicisation of the native Malay name for the country, Singapura, which was in turn derived from Sanskrit Siṃhapura; siṃha is "lion", pura is "town" or "city"). 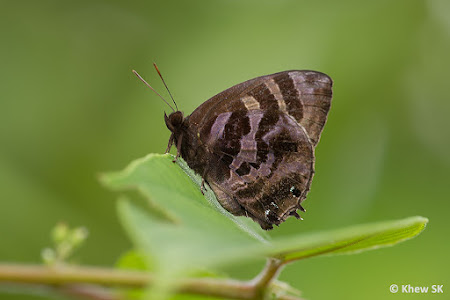 The Shining PlushBlue belongs to a small genus of butterflies called Flos. There are four species found in Singapore, of which three, including the Shining PlushBlue, are considered rare. The Shining PlushBlue is usually found in the shaded forest understorey, where it perches on the tops of leaves with its wings folded upright. The dark and cryptic underside markings give it a good camouflage amongst the leafy undergrowth. 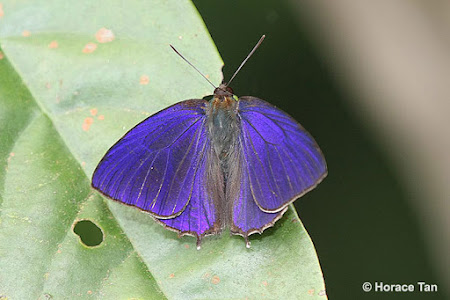 The attractive purple upperside of a male Shining PlushBlue

The Shining PlushBlue is dark blue on the upperside with thin indiscernible borders in the male, whilst the female is shining blue with broad black borders. The underside has the usual cryptic brown markings but there is no V-shaped spot at the costa but a band stretching from base to mid-costa. This distinguishes this species from the closely related Bifid Plushblue (Flos diardi capeta). 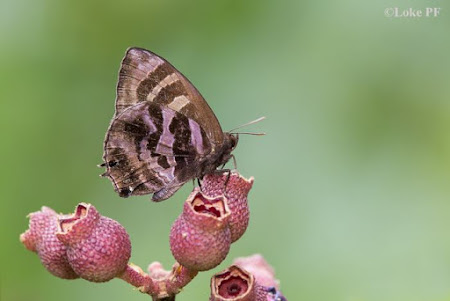 At the tornal area of the hindwing on the underside, there are bright coppery-green tornal spots encircling black eyespots. There is a short stubby tail at vein 2 and another stub at vein 3. The underside has a slight purplish wash in a sidelight. 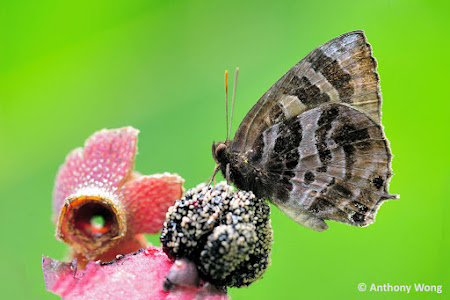 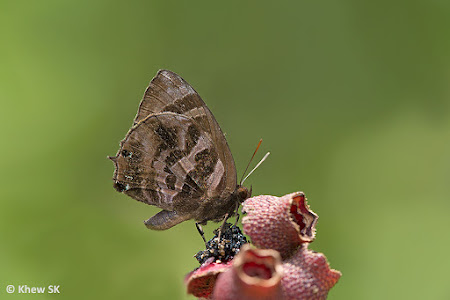 Shining PlushBlue feeding on the ripened fruit of the Straits Rhododendron 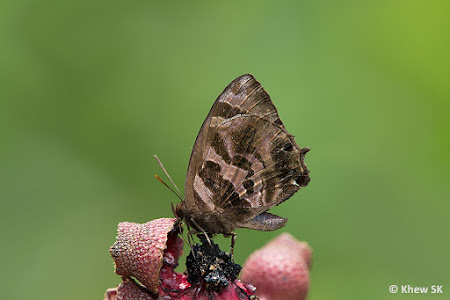 The butterfly is skittish, and takes off very quickly if alarmed. When it is settled and calms down, it can be approached stealthily for photography. The Shining PlushBlue can sometimes be seen feeding on the ripened fruits of the Straits Rhododendron (Melastoma malabathricum). The life history has not been fully documented yet. Its host plant is likely to be similar as the other species of the genus. 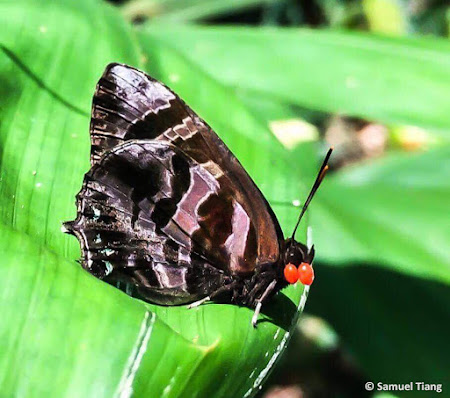 And so we are now acquainted with a butterfly species that carries the Singapore "brand". We would like to take this opportunity to wish all Singaporeans a Happy 52nd National Day!