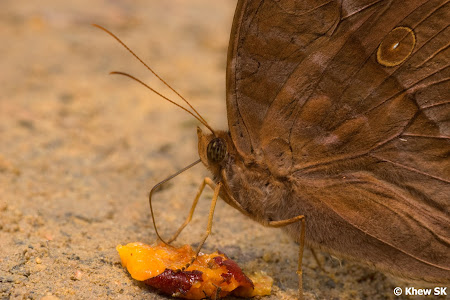 
Butterflies' liquid diet can vary from nectar to carrion and sodium-rich puddles to fermenting fruits on the forest floor. This weekend's blogpost takes a look at some encounters of various species of butterflies that feed on overripe fruits and fruits of forest trees that are decomposing on the forest floor. 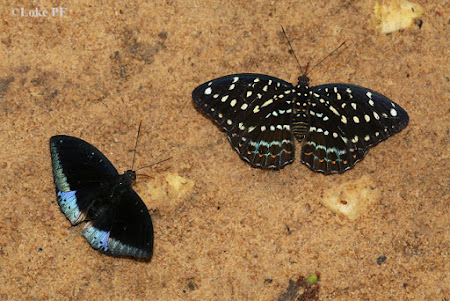 A pair of Archdukes feeding on rotting fruit


Not all species of butterflies feed on fruits that have dropped on the forest floor. These fruits that are produced by a variety of trees in the nature reserves of Singapore, either ripen and drop on the forest floor, or have been eaten by birds, macaques and other animals and the remains of the uneaten fruits fall onto the ground and ferment over time. 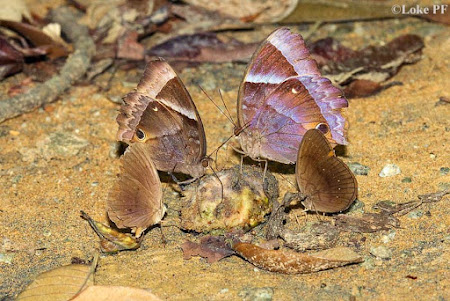 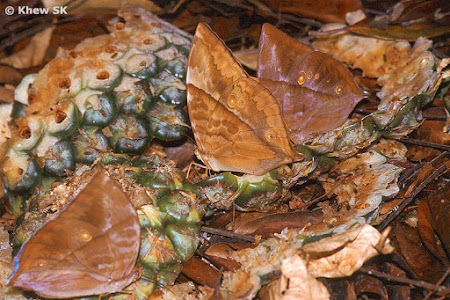 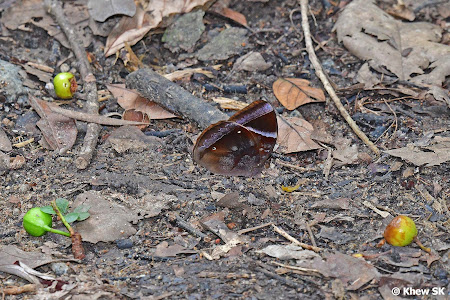 So, do all butterflies feed on rotting fruits? The answer, as with many things to do with butterflies, is "it depends". Not all species of butterflies feed on fruits, and there are cases where certain fruits only attract some species, whilst other fruits attract different other species. Generally, the forest-dependent fruit-feeding species are largely from the sub-families Satyrinae, Limenitidinae, Charaxinae and Nymphalinae. Even so, not all species in the sub-families mentioned above are fruit feeders. Field observations show that quite a number of the fruit-feeders are those that prefer low-light conditions and keep low on the ground in the shaded forest understorey. 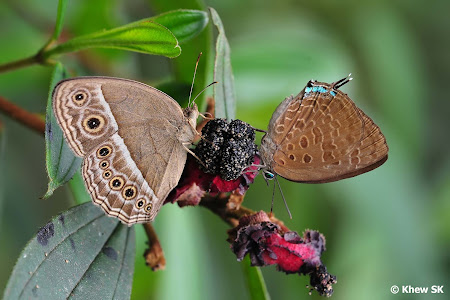 The ripened fruit of the Singapore Rhododendron (Melastoma malabathricum) attracts a Bush Brown and an Arhopala - a rare sight in itself, as Arhopalas are rarely seen to feed

Amongst the six families of butterflies, the Papilionidae, Pieridae, Riodinidae, Lycaenidae and Hesperiidae species are very rarely observed feeding on fruits. With some exceptions of some Lycaenidae, which have been observed feeding on the ripened fruits of the Singapore Rhododendron (Melastoma malabathricum), it is pretty rare to see a Lycaenidae feeding on rotting fruits on the forest floor. 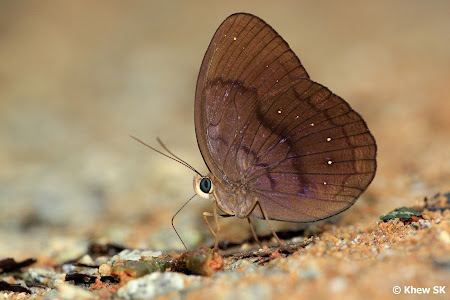 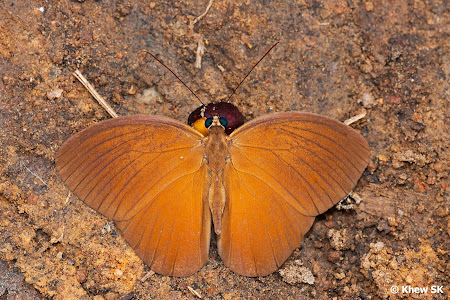 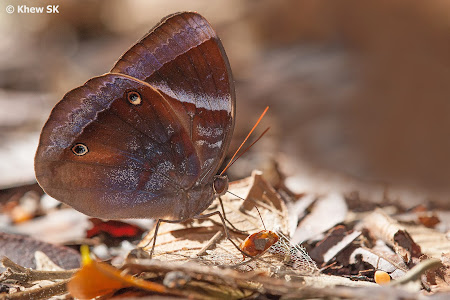 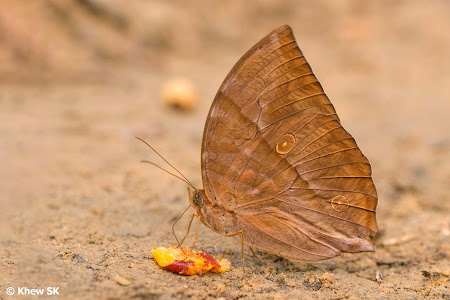 Amongst the fruit feeding species that are regularly observed on fermenting fruits on the forest floor, are species like the Common Faun (Faunis canens arcesilas), Saturn (Zeuxidia amethystus amethystus) and Dark Blue Jungle Glory (Thaumantis klugis lucipor). It is also likely that the recently confirmed Dark Jungle Glory (Thaumantis noureddin noureddin) would also be attracted to such fermenting nectar source. 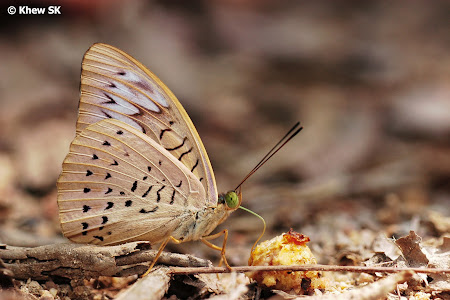 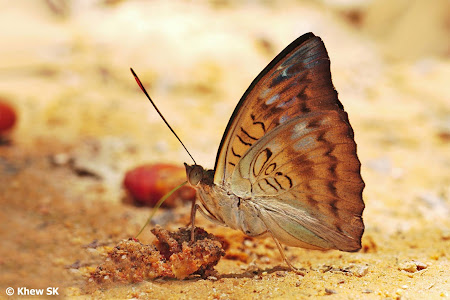 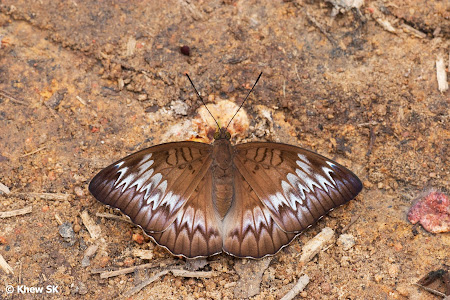 Amongst the Limenitidinae, the Malay Viscount and Malay Baron are often observed to feed on fallen fruits along forest footpaths

Amongst the species of Euthalia and Tanaecia/Cynitia we have observed the Malay Viscount (Tanaecia pelea pelea) and the Malay Baron (Euthalia monina monina), feeding on rotting fruits on the forest floor. Other species in these two genera have not been so often observed to display this behaviour and more field observations can be made to validate this. 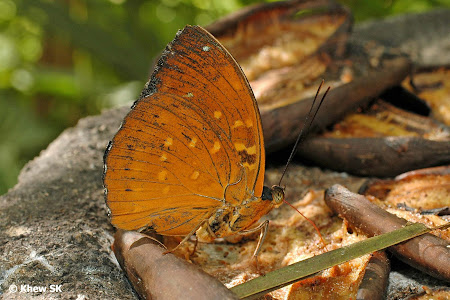 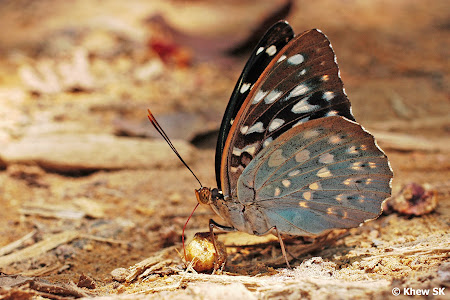 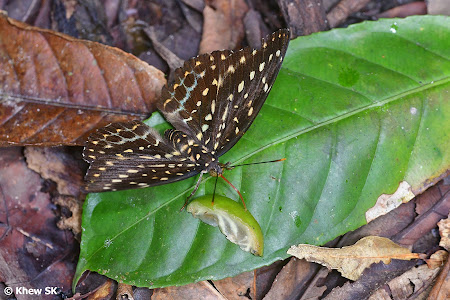 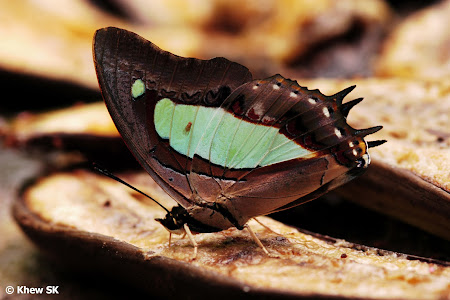 The Archdukes, Rajahs and Nawabs are often "customers" of overripe fruit on the forest floor

All three species of the Lexias have been encountered to feed on rotting fruits on the forest floor. Both males and females of the species are equally attracted to the fruits when the sugar content from the fermentation process is optimal. Amongst the Charaxes and Polyura species, some have also been observe to like feeding on rotting fruits. 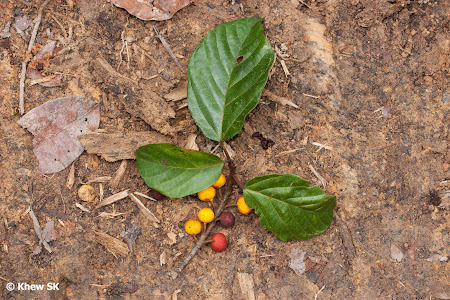 A sample of the type of fruits that, when ripened and fall on the forest floor, attract butterflies 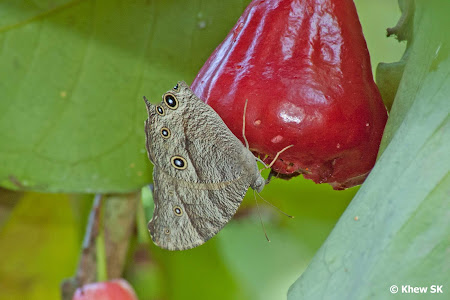 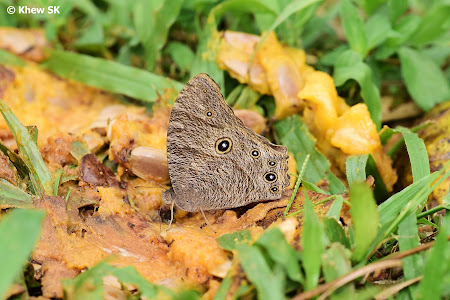 And then there are other cultivated fruits like the pink Jambu Air or Water Apple, tends to also attract some species like the Common Evening Brown (Melanitis leda leda) and the Bamboo Tree Brown (Lethe europa malaya). There are also several species of the jambu (Syzygium spp) where the fruits attract butterflies. On Pulau Ubin and Sg Buloh Wetland Reserve, we have observed butterflies feeding on the fruits when the trees drop their overripe fruits on the floor. Other species like the Bush Browns (Mycalesis spp) and Common Palmfly (Elymnias hypermnestra agina) are also attracted to some of these fruits. 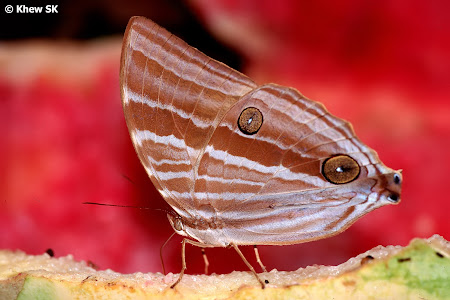 The large Palm King (Amathusia phidippus phidippus) is another species that can be found feeding on fruits. We have had a couple of observations of several individuals of this species feeding at discarded fruits from a roadside fruit vendor in Malaysia. In the picture above, the Palm King was photographed feeding on a half-eaten watermelon that had been thrown away along a footpath at Chestnut Nature Park. 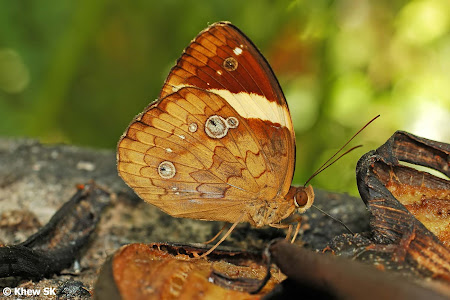 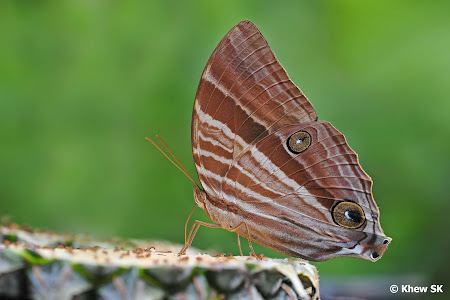 Butterflies feeding on fruit servings in commercial butterfly parks.  A Yellow Barred (now extinct in Singapore) feeding on overripe banana and a Palm King feeding on pineapple at Entopia, Penang

In commercial butterfly parks, one can often see many species of butterflies feeding on rotting banana, papaya, mango, pineapple and many other sugar-laden domestic fruits that are left to ferment on artificial feeders. There are also many websites that teach butterfly gardeners how to use fruit hangers to attract butterflies to their gardens.