A female Dingy Bush Brown (Mycalesis perseus cepheus) perches on a moss-covered tree root
The genus Mycalesis, collectively known by their English Common Name of "Bush Browns" is represented by six species in Singapore. The majority of the species are moderately common except for one which is mainly found in forested areas of the nature reserves. In this two-part blog post, we take a look at these Bush Browns that can be found in Singapore. 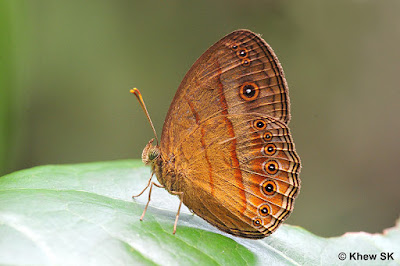 A Malayan Bush Brown (Mycalesis fusca fusca) perches on a leaf
The Bush Browns are members of the sub-family Satyrinae, usually referred to as "Browns and Arguses" Predominantly brown in colour, all the species of the Bush Browns are adorned with submarginal ocelli (eyespots) on the underside of both the fore and hindwings. As they belong to the family Nymphalidae, their forelegs are under-developed, and all the species stand on the mid- and hindlegs only. 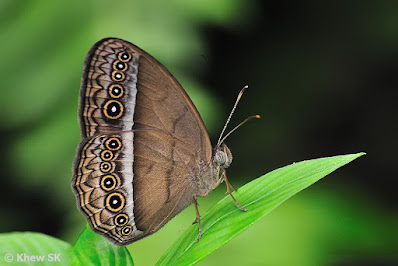 A Purple Bush Brown (Mycalesis orseis nautilus) perches on a leaf
They typically fly in grassy habitats (of which several species' caterpillars feed on as host plants), and fly low amongst the grasses and shrubbery. Their flight is generally weak but they are alert and skittish, and are often quite challenging to photograph. The Bush Browns typically rest with their wings folded upright, although some of the species have been observed to open their wings to sunbathe at certain hours of the day. 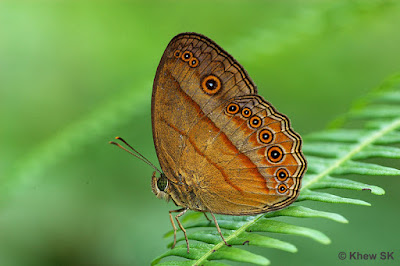 A Malayan Bush Brown (Mycalesis fusca fusca) perches on a fern
This weekend's article introduces the three more distinct species that are easier to identify in the field. In next week's article, we will take a look at the more cryptic lookalikes that will require a bit more scrutiny to correctly identify them.
1. The Malayan Bush Brown (Mycalesis fusca fusca) 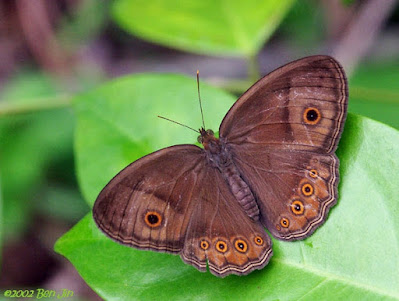 An uncommon shot of the upperside of the Malayan Bush Brown
The Malayan Bush Brown is the most distinctive of the six species currently found in Singapore. It is usually found in forested areas and along the fringes of the nature reserves flying amongst low bushes and grasses, particularly where its caterpillar host plant, Scleria bancana grows.

The Purple Bush Brown is the rarest of all the Bush Brown species in Singapore. It is a predominantly forest species and is rarely found outside the sanctuary of the shaded nature reserves. Its caterpillar host plant is currently unknown, but is likely to be one of the grasses. It is usually found singly and flies low amongst grassy undergrowth in shaded habitats. 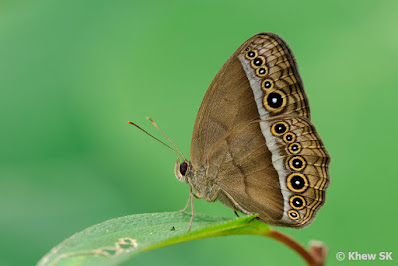 The yellow-ringed submarginal ocelli on the underside of the fore- and hindwings are rather uniform in size and the majority of the ocelli are touching the adjacent ocelli. The broad white post-discal band that stretches across both wings is faintly violet-washed in a side light.
3. The Dingy Bush Brown (Mycalesis perseus cepheus)

The Dingy Bush Brown is easily distinguished from the other lookalike species in the genus in that the ocellus in space 2 of the hindwing is moved inwards and out of line with the other ocelli adjacent to it. The species also usually has a full set of four ocelli on the underside of the forewing. The caterpillar of this species has been bred on the common "Cow Grass" (Axonopus compressus) and most certainly some other species of grasses.

The species is found amongst grassy areas around the fringes of the nature reserves and buffer parks. The males are generally darker brown than the females. The species has a widespread distribution across Singapore, but cannot be considered common. In localised areas, it can regularly be spotted flying around, and sometimes several individuals can be seen together.
Text by Khew SK : Photos by Khew SK and Tan BJ
Posted by Commander at 9:14 PM