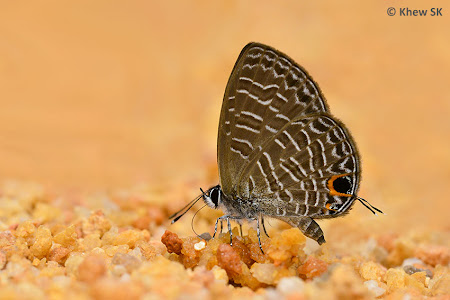 The Lycaenidae and Hesperiidae species often pose a great challenge to identification, with many lookalikes with very similar features. The challenge of identifying the many lookalikes can sometimes be mitigated with research into their early stages, (where the physical appearances and diagnostic features of the caterpillars can be a great aid to separating the species,) or with voucher specimens to scrutinise. 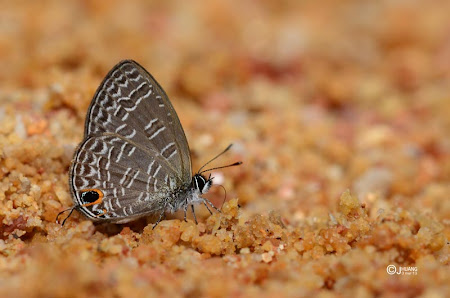 Field shots are often not the best for reliable identification, especially those where colour or size are diagnostic features, or where the physical markings may be difficult to be used to distinguish between two species, due to perspective distortions of the photographs. In some cases, where the field-shot individual is not pristine or with significant wear and tear on the wings, identification may also be problematic. 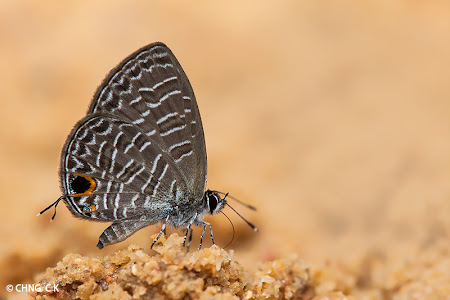 Hence for some of these lookalikes, it is often prudent to research and analyse carefully, before jumping to conclusions about the identity of a species. Over the years, ButterflyCircle has had some misidenfications, and has now adopted greater rigour in validation before establishing the identity of a species for inclusion into the Singapore Checklist. In recent years, the identification of the more challenging species has been made less onerous with the invaluable help of experts like Dr TL Seow, Dr L.G. Kirton and others. 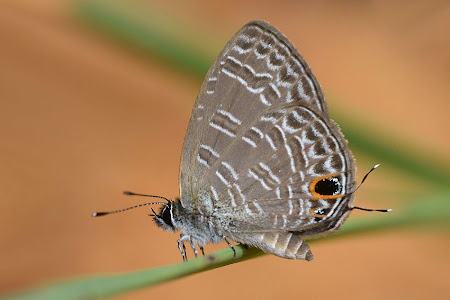 So we now announce the inclusion of the fourth Prosotas species to the Singapore Checklist. This latest addition, Prosotas aluta nanda had been recorded several times over the past years, but its identity was kept under consideration until a higher level of confidence could be accorded to its ID. Recently a voucher specimen was obtained from a location in the nature reserves of Singapore, and the specimen scrutinised to validate the ID. 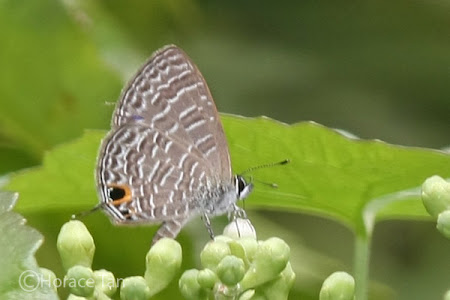 
From photographic records in ButterflyCircle's forums, the earliest posted shot of this species was documented by Horace Tan, who shot this species on 26 Feb 2008, feeding on a flower of the Bandicoot Cherry (Leea indica) in the nature reserves. There were many subsequent sightings and photos of this species, usually found puddling at sandy streambanks, that followed in subsequent years. 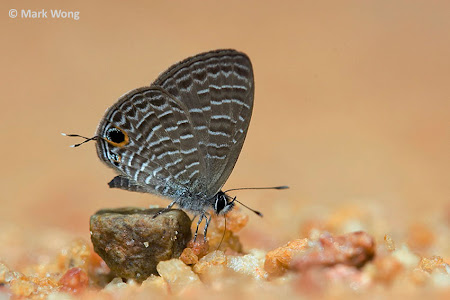 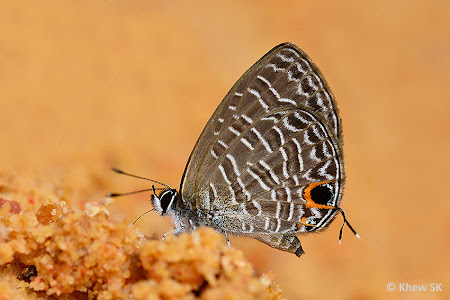 This species has been given the common English name "Banded Line Blue" in most Indian and South Asian references, but since this common name has already been assigned to the species Prosotas lutea sivoka in South East Asia (ref : Butterflies of Thailand by Pisuth Ek-Amnuay Vol 2), it would generate more confusion to refer to it by the similar name. In his book, Pisuth has coined the name "Barred Line Blue" for Prosotas aluta nanda. Whilst it would be interesting to understand why "Barred" was coined to refer to this species, we see no reason not to use this common name for Prosotas aluta in the South East Asian region covering Thailand, Malaysia and Singapore - until someone comes up with a better alternative for the English common name of this species! 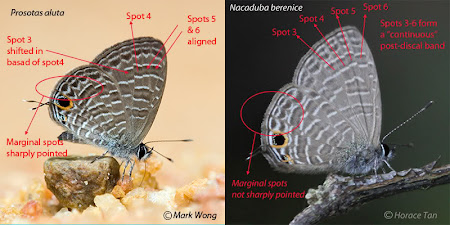 An annotated visual identification comparison between P. aluta and a N.berenice highlighting the diagnostic features of P.aluta
The Barred Line Blue has been described as "confined to the forested plains and is usually taken singly". It closely resembles the berenice group of the genus Nacaduba. In C&P4, the authors also added that "most examples can be recognised by having the post-discal spot in space 3 on the forewing below shifted in(wards) very slightly basad of the spot in space 4". The striae are also described as "clear white" in Prosotas aluta. 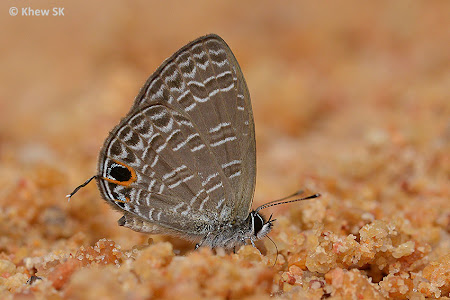 The upperside of the males of this species is blue with a narrow black border whilst the female is brown with a shining greenish-blue discal patch on the forewing. Another consistent feature that separates this species from the other lookalikes (but must be used in combination with the post-discal spot in space 3 of the forewing), is that the marginal spots, particularly the one next to the tornal orange-crowned eyespot, are arrow-shaped or distinctly pointed. In most individuals, the striae in space 4 of the forewing are also dislocated, and distinctly angled towards the termen. 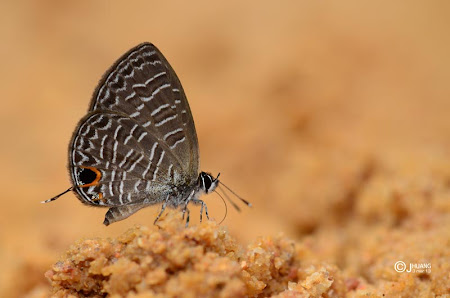 The Barred Line Blue has an erratic flight and is usually skittish, as is the case with the other species in the Prosotas and Nacaduba genera. Thus far, all the sightings of this species have been in the forested nature reserves, and more often, males are encountered puddling at sandy streambanks on hot sunny days, usually attracted to decomposing animal matter or excretions.
And so we add the Barred Line Blue as species #309 to the Singapore Checklist. At this point in time, there are several other Lycaenidae and Hesperiidae that are awaiting further validation, either from their life histories, or with voucher specimens, before adding them to the Singapore Checklist. However, we are in no hurry to do so, until we have a high level of confidence on the ID and concurrence amongst the expert advisers to ButterflyCircle.
Text by Khew SK : Photos by Chng CK, Huang CJ, Khew SK, Horace Tan & Mark Wong
References :