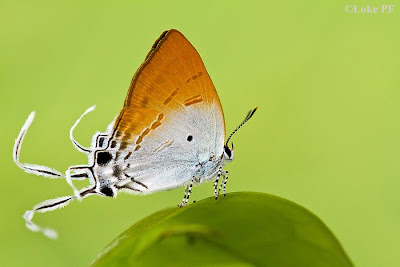 "Since taking up butterfly photography more than a year ago, a typical weekend morning would begin with a brief exchange of SMSs with fellow butterfly enthusiasts, deciding on the location for butterfly hunting. After a week of hard work in the office, a butterfly outing is always anticipated with great enthusiasm. It is also an opportunity to exercise my body and refresh my mind.
On Good Friday, it was no exception. An SMS soon arrived after my breakfast. It was Chng. After a short round of SMSs, we made a quick check on the NEA’s weather portal, and it was a go! We met up with fellow enthusiasts and headed for an urban park. At the park after hours in the field, the heat soon took its toll on us. Anthony and I decided to take a break.
While resting and shooting the breeze in a shelter, I spotted an orange object drifting into my view. It was flying down from the tree top and it landed on the bush a short distance away. Anthony jokingly commented that it was probably a fallen brown leaf. Unconvinced, I grabbed my camera and sauntered towards the bush. Just then, an orange butterfly fluttered out from the bush. Peering at it closely, I noticed the butterfly had a black spot in space 2 on the underside of its hind wing and it had a long tail. This must be a Fluffy Tit.
While the Fluffy Tit is quite commonly encountered in the field, a pristine one is relatively rare. I alerted the guys and soon, everyone crowded round the bush. There was an intense round of shutter clicking, with everyone fixing their eyes on the beautiful Fluffy Tit.
The Fluffy Tit has a habit of hopping from leaf-to-leaf, foraging for food and it rarely stays still. This makes shooting one a challenge. On that afternoon, it was breezy and the sky was ominous with rain clouds over the horizon. I dialled up the ISO, opened up the aperture a bit more to allow more light to pass through and had a higher shutter speed to counter the breeze. I waited patiently, observing the beauty jumping from vegetation to vegetation. Soon the moment came. It hopped onto a leaf in front of me. The background was unobstructed and green. Seizing the moment, I immediately but slowly lowered my body. In a half kneeling position, I aimed and got parallel to the butterfly.
While looking through the viewfinder, I saw two pairs of long tails dancing in the wind. Ensuring the entire butterfly was in my viewfinder, I snapped a few shots. Soon the Fluffy Tit took off again. I stood up and checked on the preview screen expectantly. Scrolling the captured image from top to bottom and left to right, the butterfly appeared sharp and in focus from wing tip to its eye. Bingo! That afternoon, none of us went home empty-handed – a good outing, a good workout and with some beautiful images of the flying jewels captured in our memory cards."
ButterflyCircle Photographer : Loke PF in his early 40's, working as a Project Manager in the IT industry.
Posted by Commander at 8:00 AM 2 comments