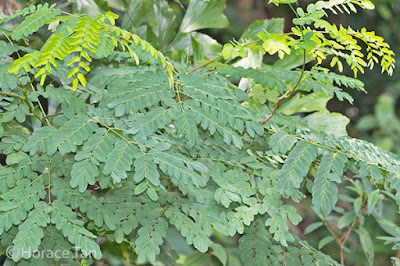 This 3rd instalment of our Butterflies' Larval Host Plants series features Adenanthera pavonina, a species in Fabaceae (bean family) which is a family of flowering plants known for their nitrogen-fixation ability. With about 18000-old species, Fabaceae is the third largest land plant family, and its members take on a variety of growth forms (trees, shrub, herb, vine, liana). The Saga Seed tree is a perennial member which assumes the tree form.


The Saga Seed tree is native to India and Southern China, but it has been introduced to many countries in the tropics. In Singapore, it is commonly planted in parks/gardens and on roadside for shade and ornamental purposes. It is noteworthy that one particular Saga Seed tree in the Singapore Botanic Garden has even achieved the Heritage Tree Status. Different parts of the Sage Seed tree have been shown to serve useful purposes. For examples, the timber has been used in house and cabinet making, and the wood produces a red dye and used in tonics. 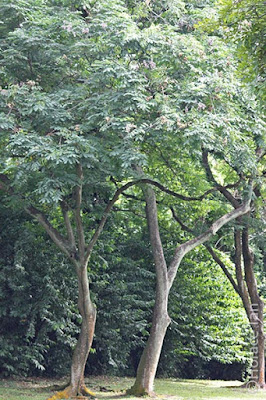 Two Saga Seed trees growing on the side of a jogging track in Jurong Lake Park.


A fast growing tree with spreading canopy, the Saga Seed tree can grow up to 20m. It features compound bipinnate leaves. Each leaf is about 10-40cm long with up to 6 pairs of side stalks each of which bearing 9-15 pairs of leaflets. The leaves are shed every 6-8 months, with the leaves turning from green to yellow before dropping off. 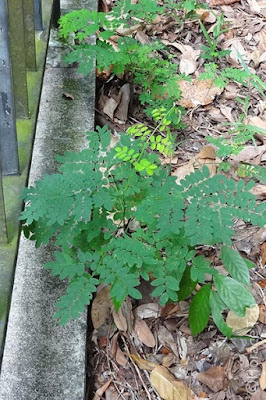 Saplings of the Saga Seed tree found alongside a pavement in the Mount Faber Park. 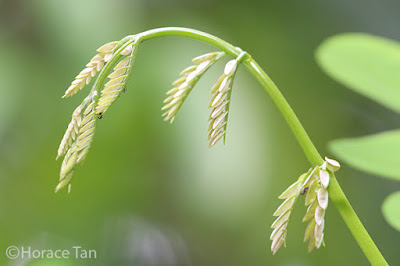 A young leaf in the early stage of growth.


The young developing leaves are yellow to yellowish brown, but turning yellowish green to dark green when they   mature. The young leaves are edible, and have been used with the bark to make a decoction in traditional medicine for treatment of diarrhoea. 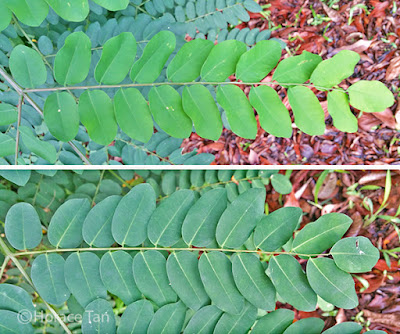 Two side stalks of leaflets, with the lower one fully matured. 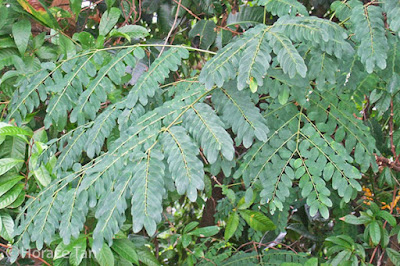 Mature leaves of the Sa.


Flowers of the Saga Seed Tree are small and creamy yellow. They occur in dense clusters on long stalks (8-12cm long). These flowers are faintly scented and turn dull orange when they age. 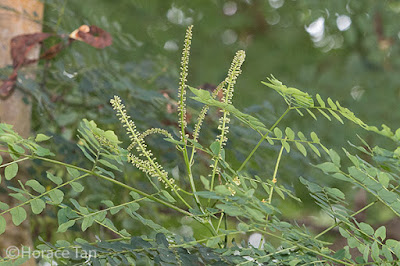 Stalks of flower buds of the Saga Seed Tree. 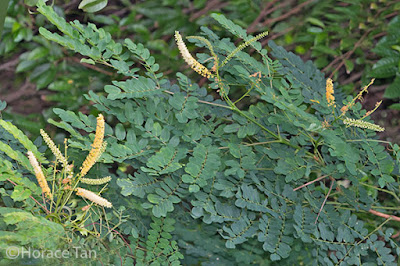 Stalks of flowers and flower buds of the Saga Seed Tree. 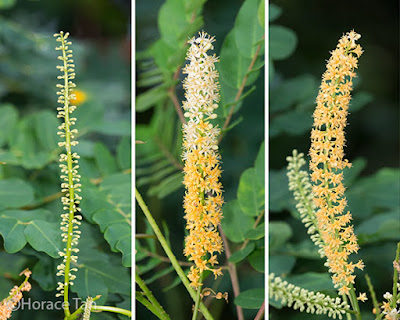 Close up views of a stalk of flower bud (left); flowers (centre, right). 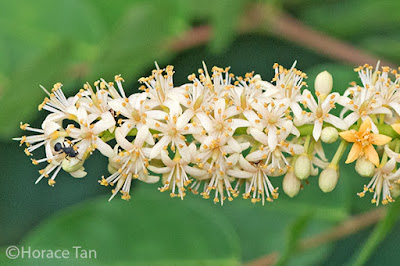 Close up view of young flowers. 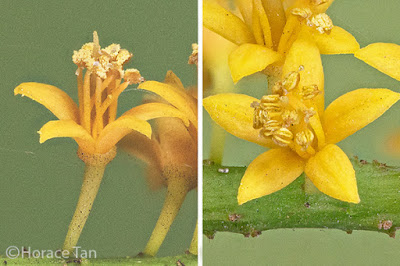 Close up view of individual flowers.


The fruits occur in long (10-20cm), curved pods. As a pod develops, bulges corresponding to the location of seeds grow in size. The pod turns brown when it is ripened, and it then splits open in two twisted halves to reveal the scarlet seeds. Each seed is hard and near heart-shaped. The ripened pods will eventually fall and litter the ground below the tree. Cooked seeds are edible although the raw seeds are toxic. The seeds have many other uses including being used as beads in jewellery (as beads),  as  industrial lubricants (oil extracts from seed), as unit of weights in ancient India and even as symbols of love in China (Chinese name: 相思豆). 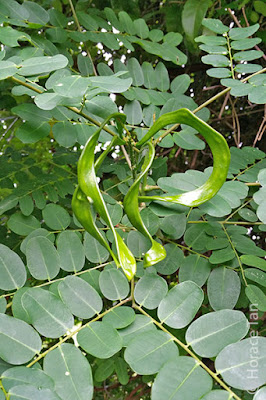 Young fruits of the Saga Seed Tree with the bulges barely noticeable. 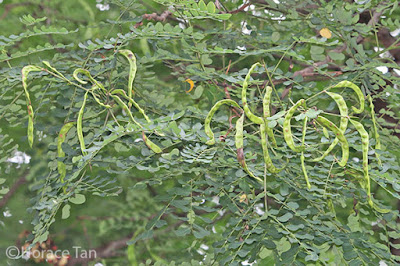 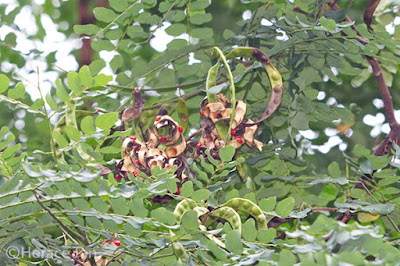 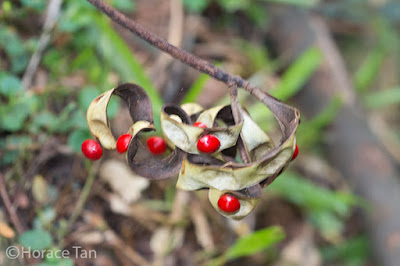 Close-up view of a ripened pod fallen to the ground. 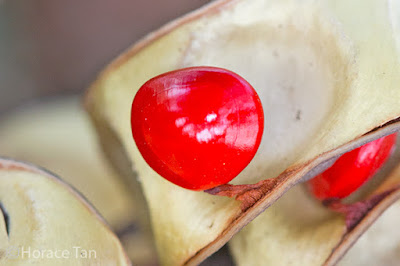 Close-up view of a seed of the Saga Seed Tree.


In Singapore, the Saga Seed tree also serves as the larval host plant for three butterfly species: Plain Nawab, Blue Nawab and  Common Imperial. The first two are Charaxinae (a nymphalid subfamily) species, while the last one is a lycaenid. 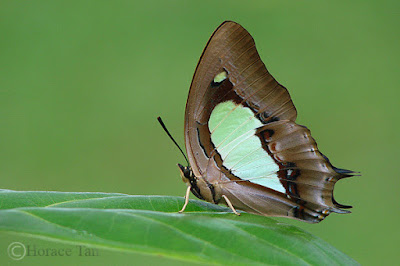 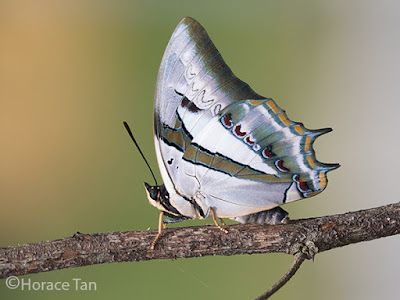 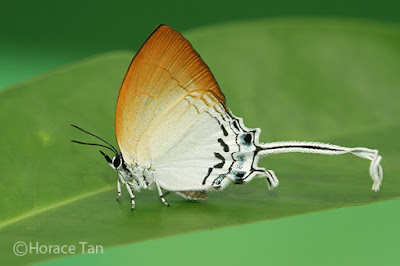 
Eggs of these three butterfly species are typically laid by the mother butterfly on the stem/leaves of a young plant of the Saga Seed Tree at low heights (knee height to chest level). The eggs of the two Nawab species are mostly found laid on the upperside of a leaflet, with a few on the underside. 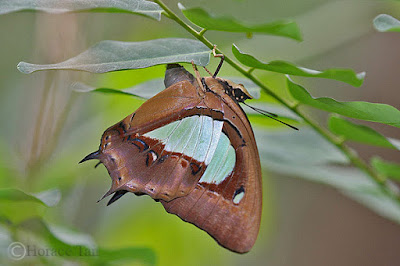 A female Plain Nawab laying an egg on the underside of a leaflet of the Saga Seed Tree. 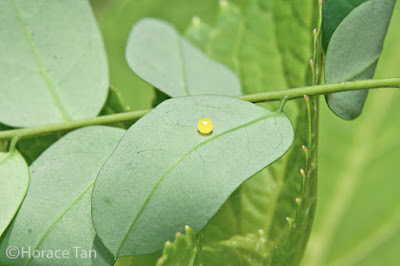 An egg of the Plain Nawab found a leaflet of the Saga Seed Tree. 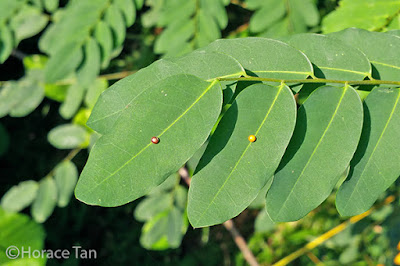 Eggs of the Blue Nawab found on the upperside of leaflets.


Caterpillars of all three species feed   on leaflets of the Saga Seed Tree.  The two Nawab species have the habit of  building a "base camp" made from weaving several adjacent leaflets together. 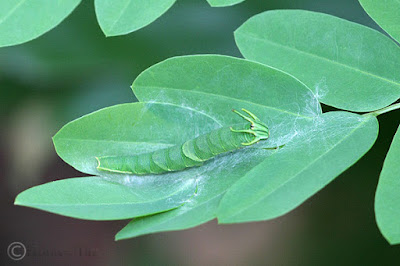 A late penultimate instar instar caterpillar of the Plain Nawab resting in its base camp on a Sage Seed Tree in the Mount Faber Park. 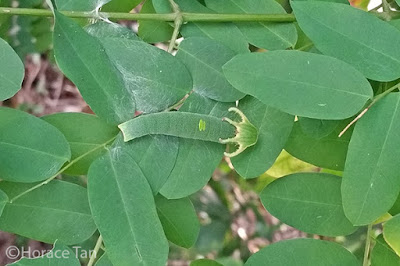 An early 5th instar caterpillar of the Blue Nawab found alongside a park connector track in the west. 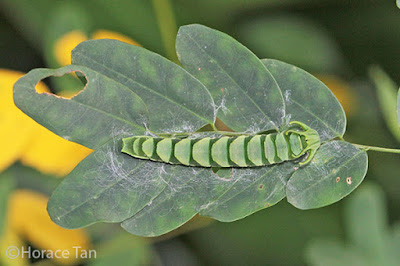 A final instar caterpillar of the Plain Nawab in its base camp found in the Telok Blangah Hill Park. 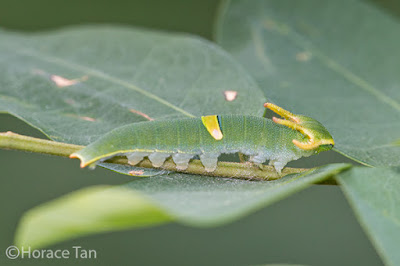 A final instar caterpillar of the Blue Nawab in its base camp found in the west. 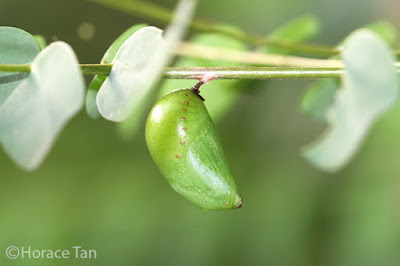 A pupa of the Blue Nawab found in the vicinity of the Chinese Garden. 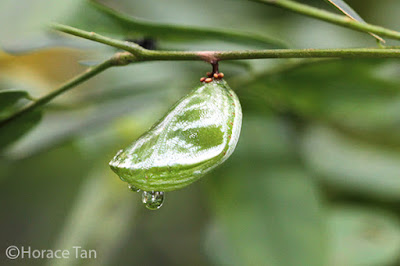 A pupa of the Plain Nawab found in the Dairy Farm Nature Park.


If you happen to encounter a young Saga Seed tree in your next outing in the field, try to look for the odd sight of a few leaflets weaved together. If you do find one, chances are you have found the base camp of a Nawab caterpillar and even the caterpillar itself. The most striking feature of Nawab caterpillars is their dragon-like head, hence it would be rather easy for you to know that you have found the real McCoy. 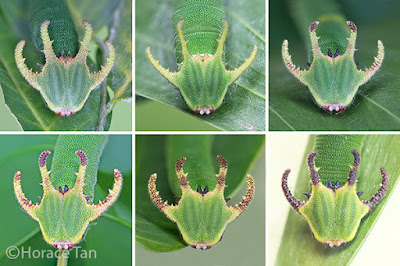 Text and Photos by Horace Tan.
Posted by Horace at 5:39 PM 0 comments