Re-Discovery of the White Banded Flat 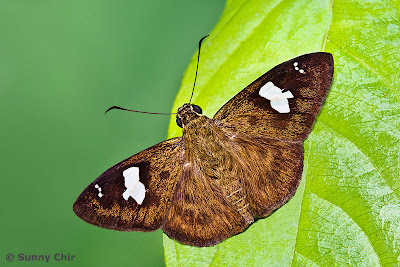 It was on one of their regular butterfly-shooting outings that ButterflyCircle members Nelson Ong and Yiming decided to take a different route to explore areas that they had not ventured before. The intention was to hopefully find something new and unrecorded. 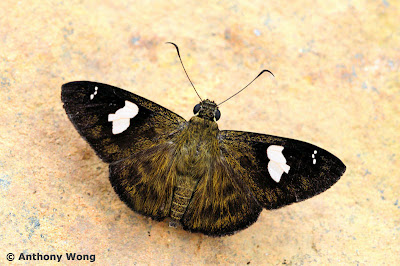 A White Banded Flat perched on a rocky surface

Their sense of adventure and pioneering spirit was rewarded with the sighting and a few shots of a species that was extant in Singapore in the early authors' checklist, but has not been seen in recent years. What was interesting, was that they didn't just chance upon only one individual of this species, the White Banded Flat (Celaenorrhinus asmara asmara), but stumbled on a small colony of them! The skippers were observed zipping up and down a forested path, and dogfighting with other individuals of the same species, as well as other Hesperiidae species. 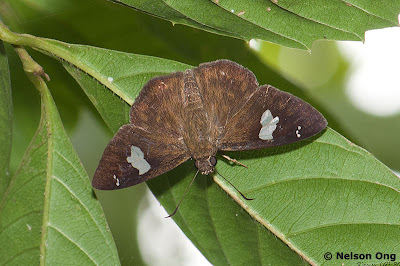 The shot that started all the excitement of the re-discovery of the White Banded Flat. This individual was first spotted by Yiming and Nelson
After the sighting was reported, another group of ButterflyCircle members headed for the location and observed the same behaviour in the colony of the species. At certain times of the day, the White Banded Flats were observed stopping and sunbathing on the top surfaces of leaves, almost repeating a fixed routine where they fly rapidly, and then returning to the a favourite perch to sunbathe. 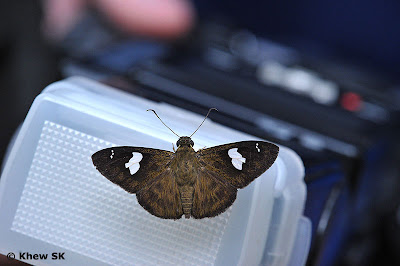 A White Banded Flat checking out the flash of one of the BC members
Occasionally, they even stop on rocks in the same manner, and one even stopped on one of the photographer's camera flash, as if to check out the intruders into their territory! However, this behaviour appeared to be just for sunbathing and resting after their rapid flight. None of them were observed to be feeding on the leaves or perches, as their proboscis were not extended for feeding. 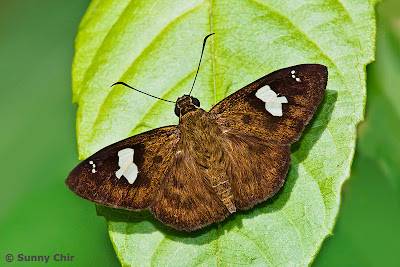 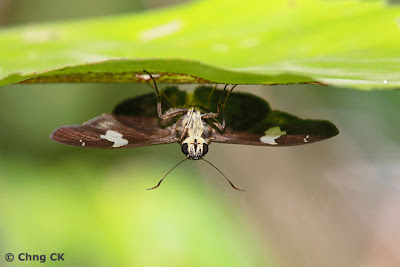 When it has had enough of sunbathing on the top surfaces of leaves, it reverts to the habit of perching on the undersides of leaves with its wings opened flat as shown in this photo

After a period of time, they reverted to the typical behaviour of the subfamily Pyrginae (Flats) whereby they stop on the undersides of leaves with their wings opened flat. Further visits and observations indicated that there was at least half a dozen or more individuals of this species in that location. However, after a period of activity and chasing each other in rapid bursts of active flight, the butterflies abruptly disappeared mysteriously altogether! 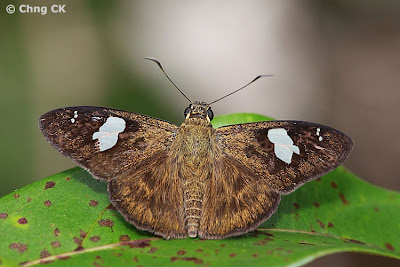 This observation is quite consistent with some species of the subfamily Pyrginae, where their active period during the day is very time-sensitive, almost like clockwork, and then beyond their magical "hour" (sometimes longer, sometimes shorter), they will mysteriously disappear suddenly, only to appear at the same time and location the following day, over a period of time. 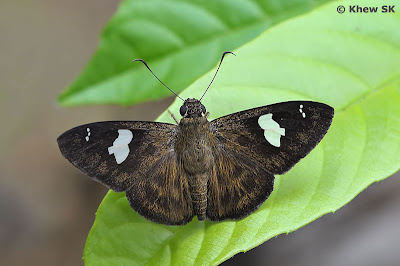 The White Banded Flat belongs to the genus Celaenorrhinus, which occurs in the tropics of Asia, Africa and America. Some 80 species are known to exist, although only 10 are recorded in Malaysia. In the reference checklist (Ref : Corbet & Pendlebury), one species, C. asmara asmara was recorded in Singapore. However, until this recent re-discovery, the species has not been seen in Singapore over the past two decades or more. 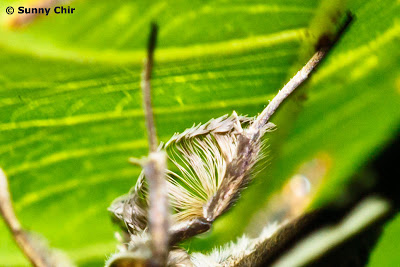 Mr Hairy Legs! The erectile hair tuft on the hind tibia of the male of the White Banded Flat

The males of the species in the genus have erectile hair tuft on the hind tibia which gives the legs a rather hairy and unique appearance. The White Banded Flat has been described as uncommon but widely distributed in the lowlands of Malaysia. On the forewing above, the forewing cell spot is not continued above the radius and there is no white spot in cell 1b. The discal fascia is white and does not extend below vein 2. There are some obscure darker brown markings on the hindwings above. 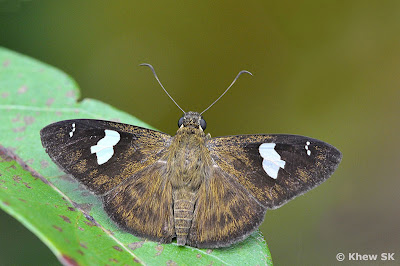 The host plant is Clerodendrum fragrans. The caterpillar is described as stout with a short neck and a lustrous black head. It is also noteworthy that the scientific name of the species comes from the Malay word asmara which means "romance or love". Whether Butler intended the name of this species to have been derived from the Malay word when he described this species back in 1879 is a subject for further investigation. 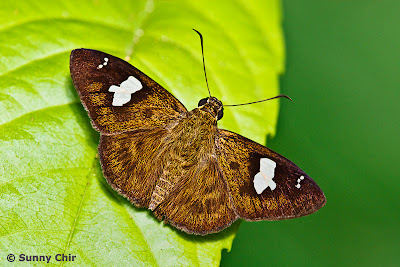 With this re-discovery, credited to ButterflyCircle members Nelson and Yiming, the Singapore Butterfly checklist edges closer to the 300 mark as we record this as species #298. 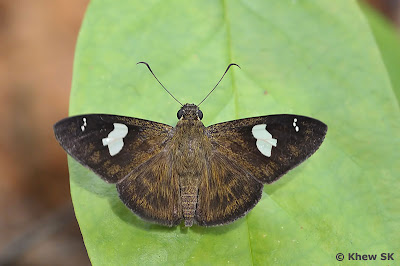