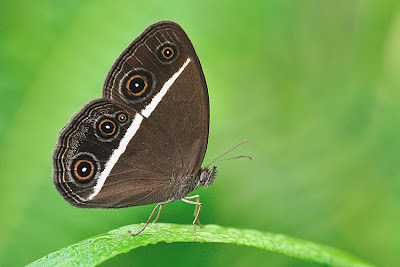 Amongst amateurs, hobbyists and even serious enthusiasts, it has always been easier to identify and refer to butterflies by their English common names rather than struggle with tongue-twisting Latin scientific names. Hence for many species, various English names have been coined by collectors and researchers for the butterflies - the names given are often associated with the physical appearance of the butterfly, although the names for the same species may vary from country to country. 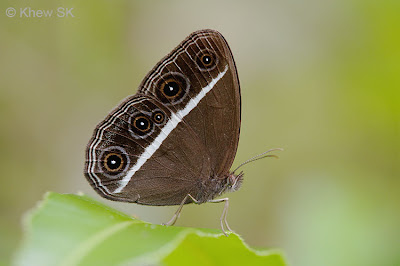 Over the years, the English common names have been used by collectors, amateur hobbyists, nature photographers and butterfly watchers. We often wonder how the species got their names, as some can be amusing whilst others sport rather curious names. 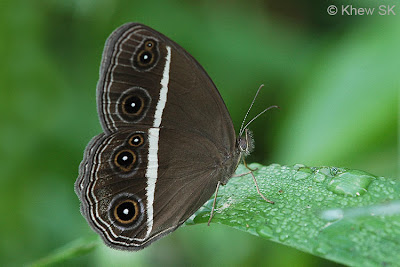 Of all the species, there is one that is noteworthy of caution whenever a butterfly watcher may inadvertently shout out its name in the wrong company! This species is the Nigger (Orsotriaena medus cinerea). I did a bit of research into early references and was rather surprised to find the 1st Edition of the Butterflies of the Malay Peninsula by A.S. Corbet and H.M. Pendlebury, on page 132 referring to this species as the Nigger. This edition was first published in January 1934! 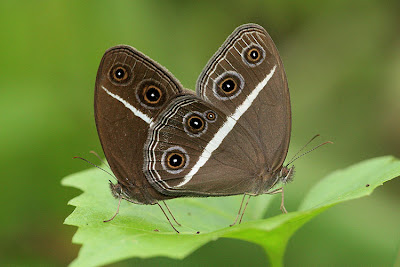 A mating pair of the Nigger

In today's politically complex and racially sensitive environment, the use of an undesirable word in the wrong part of the world may cause a person to be faced with a lawsuit, bodily harm, or encounter other more serious consequences. The name of this poor butterfly is today deemed derogatory, offensive, racially prejudiced and deeply disparaging! 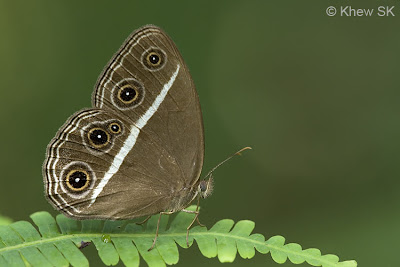 It is interesting that, in the course of evolution of the English language, words used in the late 19th century, and the early 20th century, that are seemingly innocent and simple, are now bestowed totally new meanings and connotations that are politically incorrect or just undesirable. How complicated our world has become! 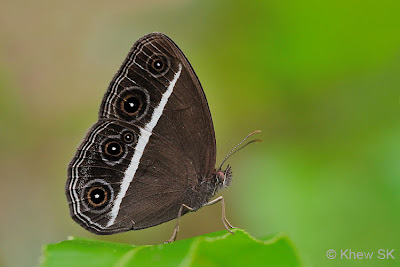 It is rather unfortunate that any reference to the common English name of Orsotrieana medus cinerea has to now be tempered with caution and care. I am quite sure that our two late Englishmen authors, Mr Corbet and Mr Pendlebury, bless their souls, did not foresee that their naming of such a common and insignificant butterfly, may in today's world, cause unnecessary controversy.

A Crab Spider makes a meal of a Nigger

So why is the Nigger named so? It may be difficult to reason why, without venturing into a speculative adventure of the association of the physical attributes of this butterfly, and the metaphors that they carry. Just because the butterfly is dark and plain doesn't necessarily mean that it had to be prejudicially associated with a particular dark complexioned race of people!
The Nigger is dark brown above, and unmarked. The undersides feature a prominent clear white stripe that extends from the costa of the forewing to the tornus of the hindwing. There are two submarginal ocelli on the forewing beneath, and three on the hindwing.

The species is relatively common in grassy areas, but usually lurking in the shade. It is a weak flyer, remaining close to the ground as it flutters skittishly from perch to perch. Its caterpillars feed on grasses. 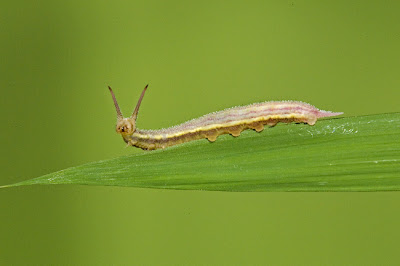 A cute "baby photo" of the Nigger

To most observers, the Nigger is rather unattractive and as it is common, it usually tends to attract very little attention amongst butterfly watchers. However, this unassuming butterfly has its own beauty, when one takes a closer look at the wings and the ocelli. 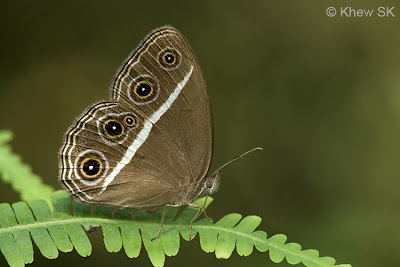 And so this humble species of butterfly continues its rather low profile existence, totally oblivious to the debatable controversy that its unmentionable common name may cause in today's complex and politically sensitive world.

Disclaimer : It is not the intention of the Author of this Blog to cause any distress nor controversy to any person or organisation with the use of politically sensitive words. This article merely highlights and calls to the attention of butterfly enthusiasts that the use of English common names of butterflies that may have undesirable impact should be dispensed with due consideration and care.

Posted by Commander at 8:30 PM 5 comments