Life History of the Green Baron 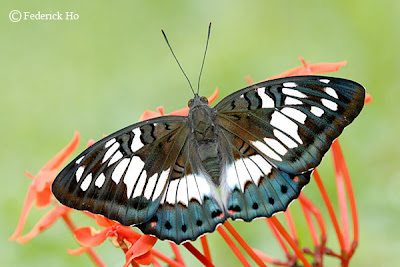 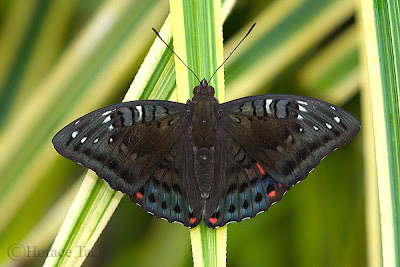 A male Green Baron sunbathing in an urban park 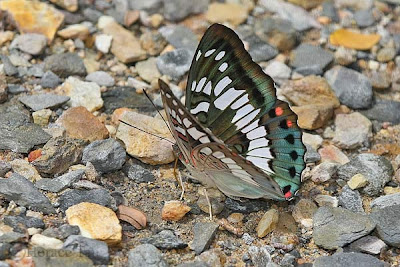 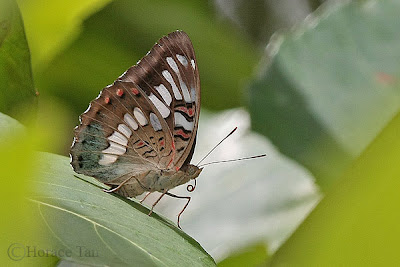 Physical Description of Adult Butterfly:
The Green Baron is instantly recognisable by their greenish colour and red potting. Male upperside is greenish-brown and the forewing cell has one white spot. The white spot in space 3 is in line with the post-discal spots in spaces 4, 5 and 6; sub-apical white spots in spaces 4, 5 and 6 are not in line, that in 6 shifted in. Male upperside hindwing has a subterminal series of black spots, with the anterior three and the tornal spot outwardly crimson. Female upperside forewing has much larger white sub-apical and post-discal spots than the male's, with the post-discal spots very large and irregular in shapes. Female upperside hindwing has a similar sub-terminal series of spots as the male, and a very broad white discal band.

Field Observations of Butterfly Behaviour:
The Green Baron is a relatively rare species in Singapore and is not often encountered. Typically, adults are sighted and more readily photographed when they descend from their tree-level perch to feed on the blooms of flowering plants like the Singapore Rhododenron, Ixora and Lantana, both in urban packs and in the nature reserves. Both sexes have also been sighted puddling on wet ground on some occasions. The colourful adults are robust, alert and rapid fliers.

Early Stages:
The host plant is a parasitic plant which grows on mature trees in various parts of Singapore. This mistletoe is rather common in urban parks, gardens, housing estates and on trees planted by the roadside. Besides Green Baron, its leaves are also utilized by early stages of Painted Jezebel (Delias hyparete metarete), Great Imperial (Jacoona anasuja anasuja) and Peacock Royal (Tajuria cippus maxentius), and likely a few other lycaenidae species. Whilst caterpillars of Painted Jezebel and Peacock Royal feed solely on the relatively young tender leaves, those of the Green Baron prefer the thicker and harder mature leaves. 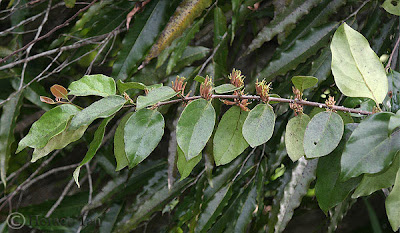 The eggs are laid singly, usually on the uppersides of mature leaves of the host plant. The brown egg is dome-like in shape with a wide bulging base, about 2mm in diameter. The surface is covered with large hexagonal depressions the corners of which have with yellowish hair-like protuberances emerging. 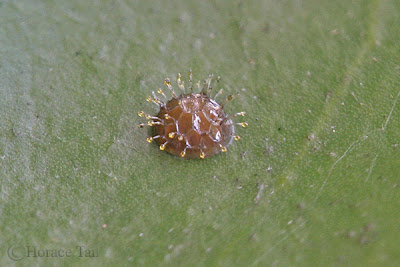 An egg of the Green Baron

After about 3-4 days, the 1st instar caterpillar emerges, eating the eggshell as its first meal. It then proceeds to feed on the leaf lamina by eating along the edge. The caterpillar is yellow in body colour, has a black head and sports ten pairs of short dorso-lateral protuberances complete with long setae. It grows from an initial length of about 3.5mm to 7mm in three days. The subsequent moult takes it to the 2nd instar. 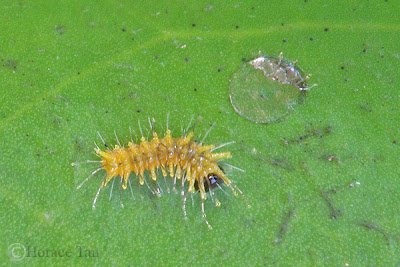 Newly hatched 1st instar caterpillar, length: 3.5mm.
Note the remnant of the egg shell (the circular mark) to the upper right of the caterpillar. 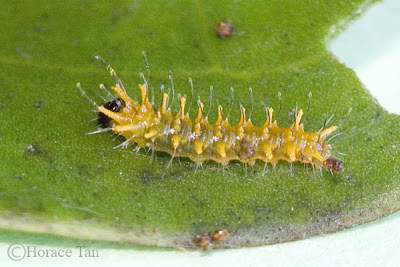 The body of the 2nd instar caterpillar is predominantly greenish yellow dotted with small white spots. The head has changed to light brown in color and featured quite a few short setae. The ten pairs of short protuberances seen in the 1st instar have lengthened considerably. Projected horizontally with numerous branched spines and almost always pressed to the leaf surface, these protuberances not only give the caterpillar a very unique shape but also serve to break up the shape and shadow of the body. When resting on the mid-rib of the leaf, the branched spines give the caterpillar some measure of camouflage from predators. The middle section and the tip portion of each protuberance are colored dark brown to black. The 2nd instar lasts for three days with the body length reaching about 11mm before the moult to the 3rd instar. 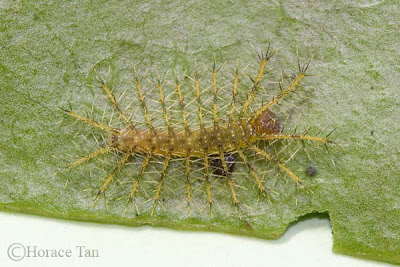 2nd instar caterpillar of the Green Baron with its branches spines, length: 7.5mm
The 3rd instar caterpillar is similar in appearance to the 2nd instar, but the spines have grown much longer. The branched spines appear almost like a bird's feather, with the secondary spines arranged neatly and nearly perpendicular to the main spine. The body color is predominantly pale green and the head is light brown. Large and prominent dark brown dorsal spots appearing on the anterior part of the first two thoracic segments, the first two abdominal segments, and abdominal segments 4, 5 6 and 7. The two dorsal spots on the first two abdominal segments are connected with a dark brown patch sporting small white dots. The 3rd instar lasts for 3 days and reaches a length of 16mm before the next moult. 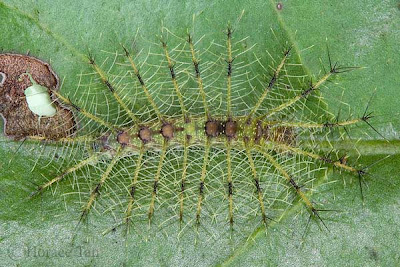 The 4th instar caterpillar has similar appearance as in the 3rd instar. Comparing it to the earlier instar, the body color has a lighter shade of green and the dorsal spots are milky brown in appearance. Each dorsal spot is decorated with a prominent small white spot (variable in size, and some are diamond in shape) at the center of the leading edge. The black section on each protuberance is now drawn closer to the black tip, roughly about one-third way from the tip. After 5 days in this instar, and growing to a length of about 30mm, the caterpillar moults to the the 5th and final instar. 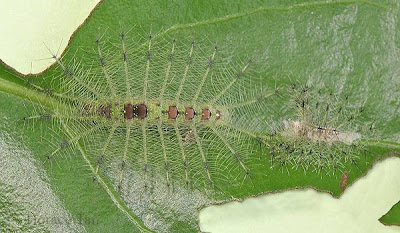 A 4th instar caterpillar which has just shed its old skin. length: 17mm 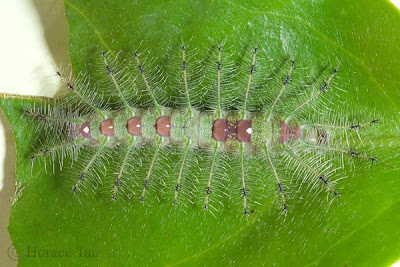 The 5th instar caterpillar features a brighter shade of green. Side spines of the previously black sections and tips of the protuberances have changed color to pink. On each protuberance, the "interior" section has almost fully married up with the pink tips, if not for an intervening white section. 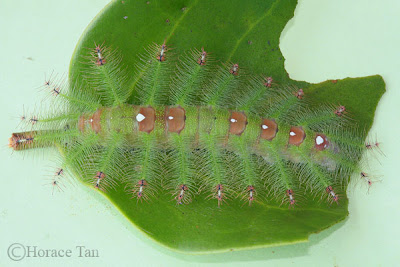 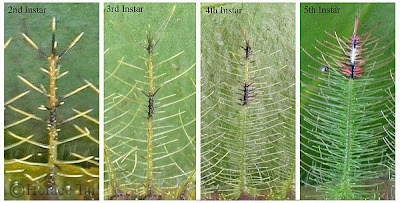 Left to right: Changes in the appearance of one protuberance from the 2nd to the 5th instar.
Note the increase in the density of side spines.

This final instar lasts for 5-6 days with the caterpillar reaching a mature length of about 50mm. On the last day, its body becomes shortened and decolorized. Soon after it adopts the pre-pupatory pose on the leaf underside or on a nearby stem. All dorsal spots disappear at this juncture and a bi-color saddle mark can be seen on the 2nd abdominal segment. 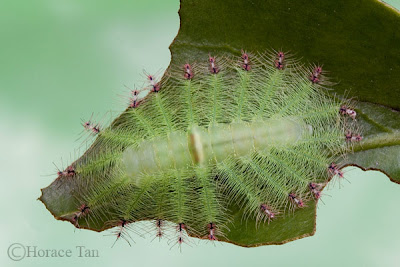 A pre-pupa of the green Baron

After 1 day of the pre-pupal stage, pupation takes place with the pupa suspended with its cremaster firmly attached to the silk pad on leaf surface. The pupa is smooth and tapers steeply towards each end from a high transverse dorsal ridge. The light green pupa has a series of brownish spots arranged symmetrically. Length of pupae: 20-21mm. 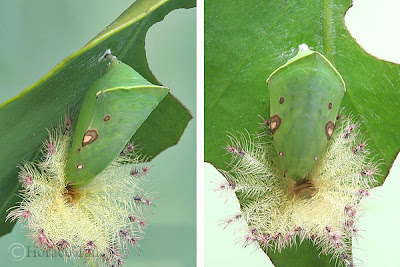 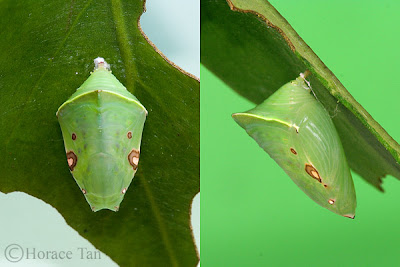 Two views of a pupa of the Green Baron

Ten days later, the pupa has developed to the point of revealing the upperside wing markings in the wing pad area. The next day, the adult butterfly ecloses in the morning hours. It stays on the empty pupal case for an hour or two before taking off to feed, find a mate and continue the circle of life and propagation of the next generation. 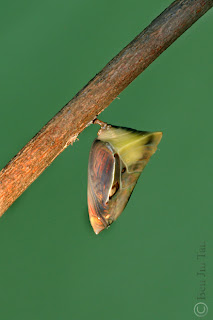 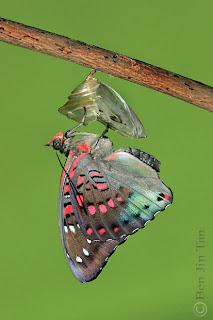 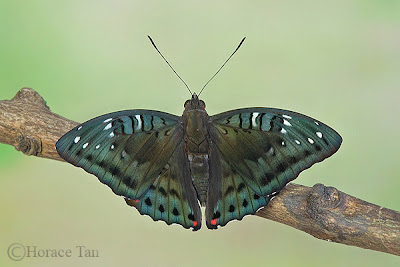