Butterfly of the Month - October 2015 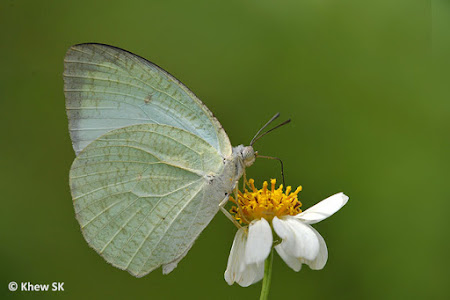 A male Mottled Emigrant feeding on the flower of Bidens pilosa


The haze that enveloped much of Southeast Asia continued into the month of October 2015 and will probably go down on record as one of the worst man-made air pollution event for a long time. The prevailing south-westerly and south-easterly winds continued to blow the smoke from Indonesia's forest-burning activities towards Singapore, Malaysia, southern Thailand and even as far as the Philippines! 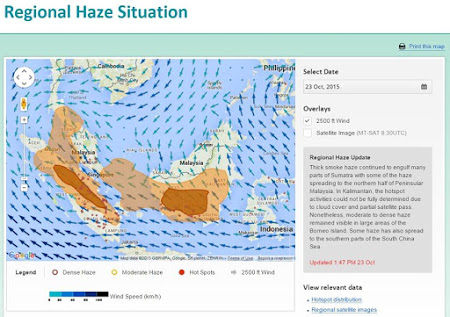 Regional Haze map showing the extend of the haze covering Singapore, Malaysia and Thailand and the prevailing winds

It is quite amazing that Indonesian government continues to sit back whilst their own people suffer PSI conditions reaching almost 3,000! At that number, keeping count of whatever the PSI number is, becomes totally meaningless and irrelevant. It is hoped that ASEAN will continue to put pressure on the Indonesian government to take positive action to stop this environmental carnage. Otherwise it will become a yearly affair for all its neighbours - at least until the government allows the perpetrators to burn down all its forests until there is nothing left to burn. 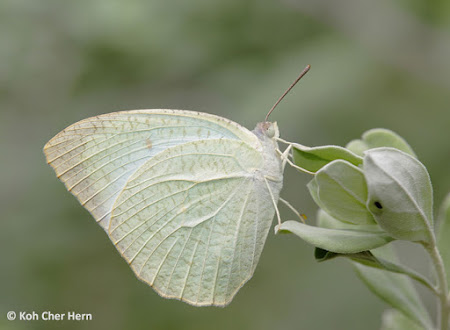 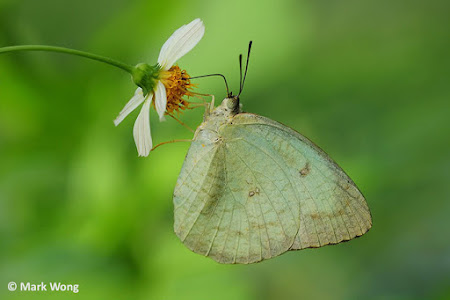 At the moment, there is nothing else any other neighbouring country can do, but offer assistance, grumble, complain, threaten and so on, without any resolution. The only answer to end this haze will be when the Northeast monsoons puts out the fires in Sumatra and Kalimantan. A weak government cannot do anything more than to chide its neighbours for complaining about the haze. 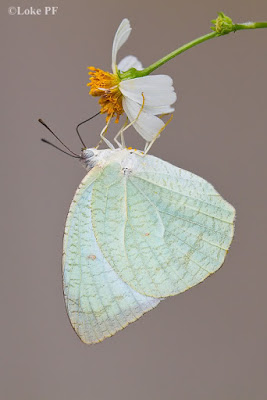 Over in little Singapore, it is heartening to know that there are more and more voices regarding animal welfare concerns. A fisherman was videoed baiting a hook which snared an otter. In the video clip, the squeals of distress (and probably pain) from the hooked otter made watching the whole thing even more heart-wrenching. But the amount of criticism in social media prompted the government agencies and even the police to eventually locate the fisherman. The case is still pending. 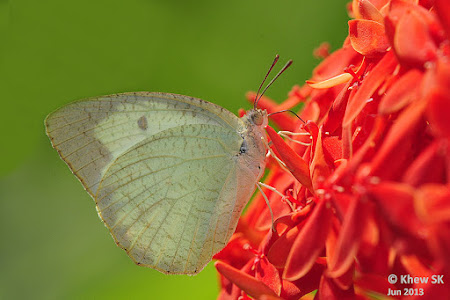 This month, we feature a common butterfly species in Singapore, the Mottled Emigrant (Catopsilia pyranthe pyranthe). The Mottled Emigrant is one of three species of the genus Catopsilia found in Malaysia and Singapore. Their common name "Emigrant" suggests that these butterflies indulge in migratory tendencies. Indeed, over the years of butterfly watching here in Singapore, at least one of the species, the Lemon Emigrant (Catopsilia pomona pomona), has been seen "migrating" in numbers across the island on one occasion. 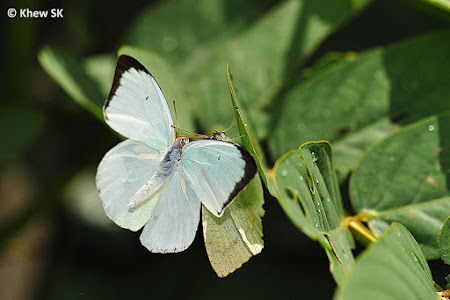 A male Mottled Emigrant shot in flight with its wings opened, whilst courting a female 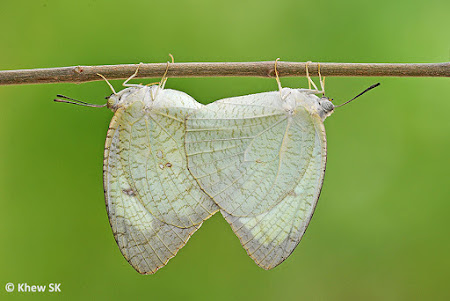 
The underside of the butterfly features a series of brown transverse striations, giving the butterfly a "mottled" appearance. The underside of the closely-related Lemon Emigrant is usually clean and without this mottling. However, in some individuals of the Mottled Emigrant, this mottling is so indistinct as to cause mis-identification of this species, particularly in the field. 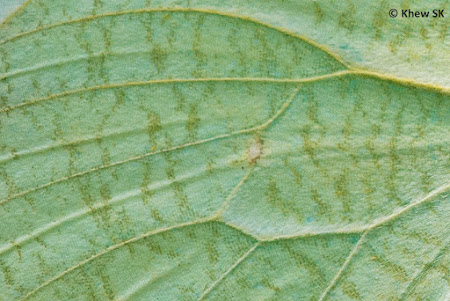 
The Mottled Emigrant is a fast-flying butterfly, often on the wing on bright sunny days, flying erratically at high speed. It is skittish, and difficult to photograph, except with it stops to feed at flowering plants, or when it is resting in the shade. It is seldom encountered with its wings opened flat. 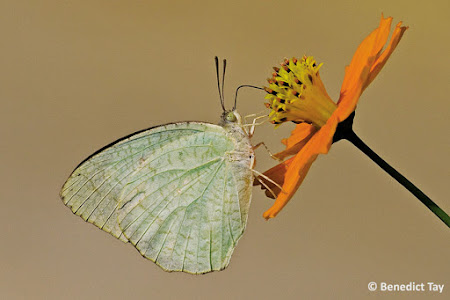 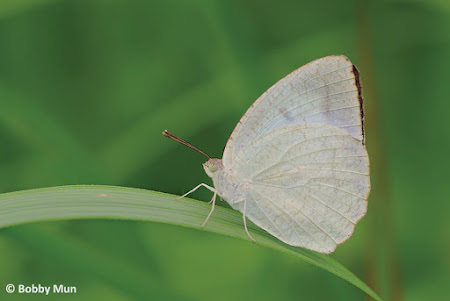 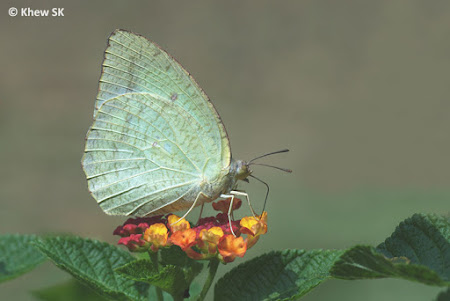 The species does not appear to puddle at moist sandy streambanks and forest footpaths (thus far no known record in Singapore). Unlike many Pieridae, which tend to puddle, the Mottled Emigrant is more often encountered feeding on flowers in urban and sub-urban parks and gardens. The caterpillar of the Mottled Emigrant feeds mainly on its preferred host plant, the Seven Golden Candlesticks (Senna alata), which has been cultivated in many parks and natureways as a butterfly-attracting plant. 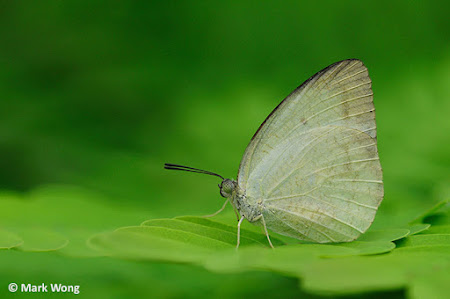 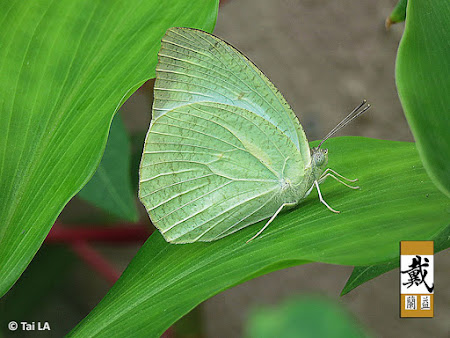 In photographs, the Mottled Emigrant may look pale greenish white to light lime green, depending on the condition of the butterfly, its surroundings, fill-flash, ambient lighting and contrast settings on the camera. Hence in the field, it may sometimes be confused with the various forms of its cousin, the Lemon Emigrant. The key distinguishing characteristic are the mottled markings on the underside of the wings.
Text by Khew SK : Photos by Khew SK, Koh CH, Loke PF, Bobby Mun, Tai LA, Benedict Tay and Mark Wong.