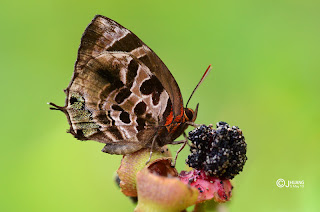 We are well past the half-way mark of the fifth month of 2013 as the weather begins to get hotter in the northern hemisphere as spring gives way to the beginning of the summer months. Over here in Singapore, we are getting 32-34 deg C days, and the heat can be quite unbearable when under the hot sun. I had just come back from a short four-day trip to Beijing, the capital city of China, where the temperatures were warming up but the days were still a comfortable 22-26 deg C. We also had two days of blue skies in Beijing, a rarity, according to the locals. 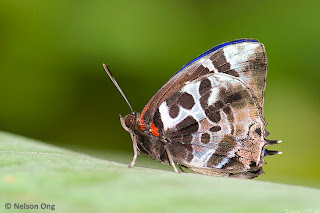 Over to the north, our neighbours in Malaysia have just completed their 13th General Elections where the ruling party, Barisan Nasional was returned to power. The results indicate an apparent deterioration of popular support for the ruling party, and the opposition coalition raised doubts about the legitimacy of the results with allegations of fraud. That's politics for you. In such situations, there is often more than meets the eye. But who's right and who's wrong? Well, it depends from whose perspective you are looking at the issues. 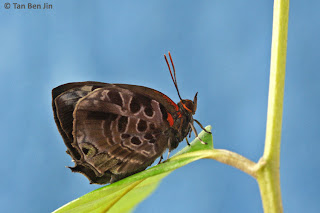 Singapore has its fair share of politics in the news as the PAP debates the costs of managing town councils with the opposition Workers Party. The Parliamentary debate has been at the top of the media attention, although the conclusion again depends on which perspective one views the 'facts' from. 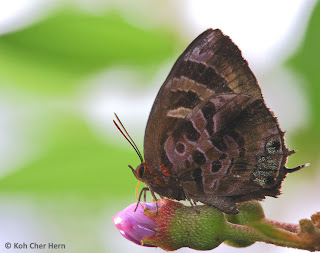 On the public health front, the number of dengue cases continue to climb. Although quite a lot of effort has been put in by the various government agencies to educate and create awareness, it may be a little while more before the number of infections drop. Interestingly the reported cases and locations where the clusters were found had been largely in the high-rise residential apartments, rather than landed properties, where mosquito breeding grounds were assumed to be more prevalent! 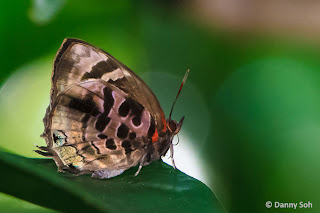 On a related front, a high-ranking National Environment Agency officer shared with me that the fogging of premises using thermal fogging with the pesticide cypermethrin may actually be quite ineffective to control the Aedes mosquito! Last year, a writer questioned the effectiveness of cypermethrin and even suggested that the chemical may be harmful to humans! In a Parliamentary debate just in Feb this year, the Minister for Environment and Water resources even mentioned that fogging as a first line of defence is not recommended. 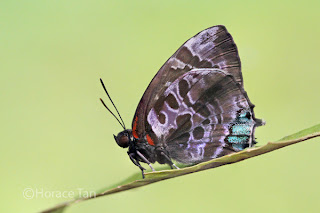 However, we often see massive plumes of 'smoke' where fogging is used at various sites in Singapore. Bearing in mind that fogging is not 'effective', ignorant residents are still asking for it! Or is it perhaps because the National Environment Agency perceives that it has to carry out fogging so that residents feel that something is being done about the mosquito breeding? Whatever the case may be, fogging is a sheer waste of resources, and may even affect pets and humans in ways that we are not fully aware of! 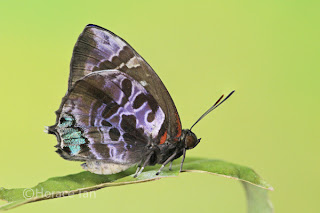 In the Straits Times forum letter by Dr Ong Siew Chey in March last year, it was quoted that "the US Environment Protection Agency classifies cypermethrin as a possible human cancer-inducing agent. A recent study has linked pyrethroids, to which cypermethrin belongs, to leukaemia and lymphoma. Cypermethrin is a neurotoxin that can affect brain tissue and can damage many other organs." 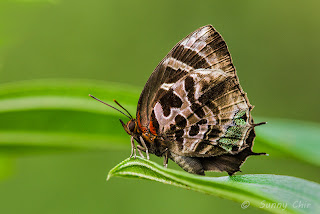 What does this all have to do with butterflies? It's because these chemicals kill caterpillars and butterflies that are too weak to escape the fogging! It is therefore not surprising that urban dwellers often wonder where all the butterflies have gone! 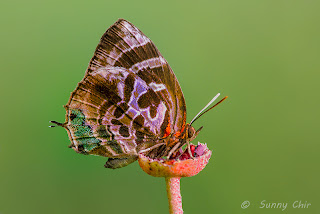 Fortunately, we still have areas of our nature reserves and even large patches of urban wild greenery that are free from pesticides, and where fogging is totally pointless. It is mainly in these forested areas where butterflies still survive and thrive. 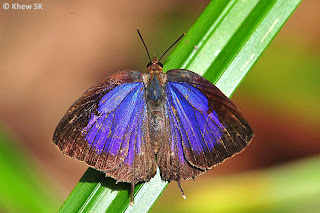 Our Butterfly of the Month for May 2013, the Bifid Plushblue (Flos diardi capeta) is one such forest-depended species that survives in our forests. The species is rarely found in urban areas. Even in the nature reserves, where the Bifid Plushblue prefers the shaded understorey of tall trees, the species is considered rare, and if encountered, is often found singly. 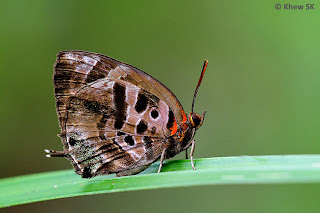 The Bifid Plushblue is one of four species belonging to the Flos genus. The genus is closely related to the Arhopala but the undersides of the Flos are more distinctive and contrasty with usually dark brown markings against a paler brown ground colour. The darker markings are often conjoined, giving the Flos a more banded appearance. 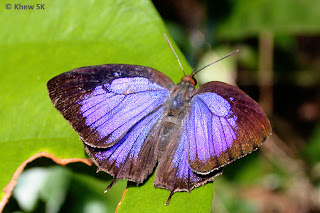 Two of the Flos species, including the Bifid Plushblue, have strong red markings at the wing bases on the undersides. The male of the Bifid Plushblue is dark purple-blue above with very thin borders. The female is coloured a lighter purple-blue with broad dark brown borders on both wings above. The characteristic cleft-shaped costal spot on the hindwing separates this species from the others in the genus. 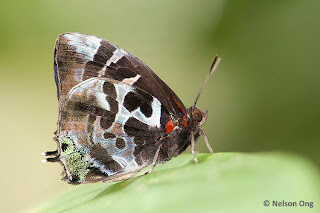 On the underside, the wings feature the typical Flos cryptic patterns where the tornal area of the hindwing has coppery green scales across a broad area, surrounding two black eyespots. There is a thick white-tipped tail at vein 2 of the hindwing that is relatively long compared to the other species of the genus. The hindwing is also toothed at veins 1b and 3. 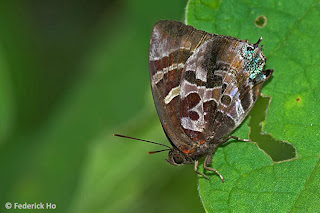 The butterfly is alert to movements and is rather skittish. When it is lurking amongst the shaded undergrowth, it may be difficult to approach as it will take off to the treetops if disturbed. It is often encountered on the top surfaces of leaves with its wings folded upright. At certain hours of the day, it may be encountered sunbathing with its wings opened, displaying its purple-blue uppersides. 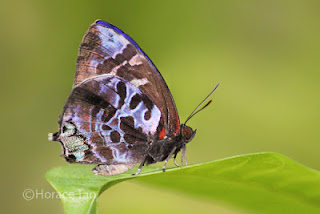 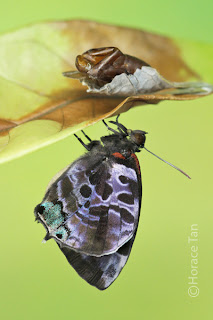 It is rare to see many of the Flos and Arhopala species feeding on flowers or other food sources. However, when the Singapore Rhododendron flowers and fruits, many species of butterflies are attracted to the ripened fruits of the plant. The Bifid Plushblue is one of many forest species that loves the fruits of the Singapore Rhododendron and as it feeds greedily, it offers a good opportunity for butterfly photographers to take a good shot of the species.

Posted by Commander at 6:00 PM 0 comments