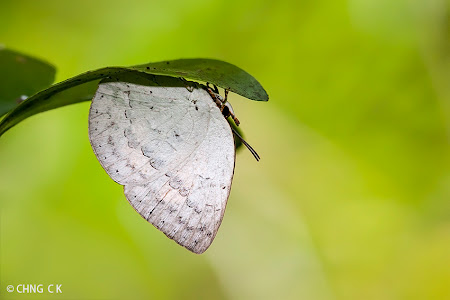 The Sumatran Sunbeam is one of two species of the genus Curetis that exists in Singapore. Although other species were recorded before, they remain elusive and besides the Malayan Sunbeam (Curetis santana malayica) the other species recorded by the early authors have not been reliably identified yet.
The Sumatran Sunbeam is usually found in the mangrove habitats in places like Sg Buloh Wetland Reserve, Pasir Ris Park Mangrove swamp and Pulau Ubin. It is a fast flyer, and females are more often seen than the males of this species. The Sumatran Sunbeam has a habit of flying rapidly, then perching on the underside of a leaf to hide. Two weekends ago, ButterflyCircle member Chng CK managed to capture a shot of this species, perched on the underside of a leaf with its wings folded upright.
Posted by Commander at 8:00 AM 0 comments