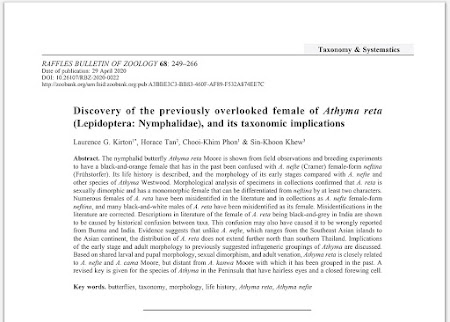 Abstract of the paper published in Raffles Bulletin of Zoology


The recent publication of our paper in the Raffles Bulletin of Zoology Vol 68(2020) on 29 Apr 2020 entitled the "Discovery of the previously overlooked female of Athyma reta, and its taxonomic implications" was a culmination of over 4 years of research and meticulous studies of references and specimens across the region. The discovery that the female of the Malay Staff Sergeant (Athyma reta moorei) is black-and-orange started as far back as 2015, when our early stages expert, Horace Tan stumbled upon the caterpillars of the Malay Staff Sergeant in Singapore and bred a few batches of the caterpillars. 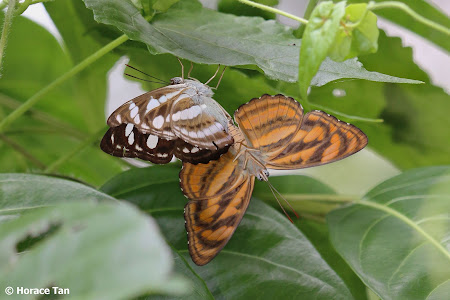 The study took a long time to complete because of the thorough examination of some 90 specimens. The paper compares the early stages of the Malay Staff Sergeant with the Colour Sergeant. It analyses the colour patterns of the females using statistical techniques in order to find the best distinguishing characters of these females that can be so difficult to tell apart. In addition it explores the possibility of other female forms existing in the Malay Staff Sergeant, just as they do in the Colour Sergeant, but we came to the conclusion that the female is always black-and-orange. The paper also discusses many taxonomic implications of the new finding. 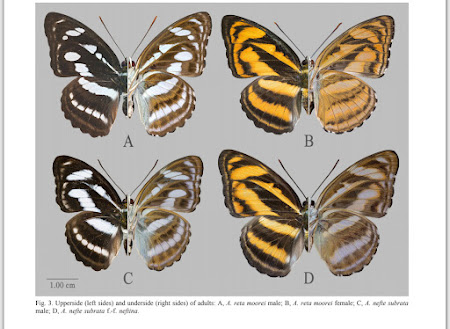 
Based on existing literature and references, the Malay Staff Sergeant has been described as "sexes similar" (e.g. in Fleming), implying that the male and female of the species are similar. In various books, ranging from Butterflies of the Malay Peninsula to Butterflies of Thailand, only males were shown. Even in the classic online reference that many of us often refer to, Inayoshi-san's site, A Check List of Butterflies in Indo-China, only a male specimen of Athyma reta was depicted. Many other regional references imply that the species is sexually monomorphic. 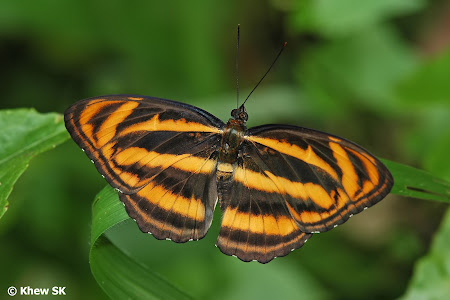 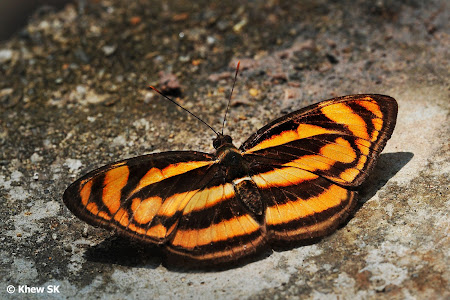 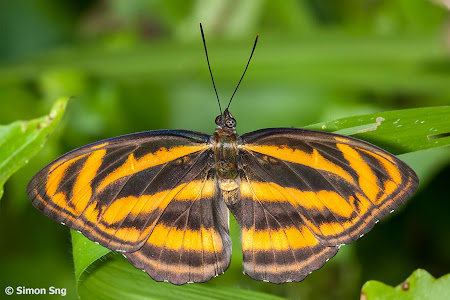 In examining specimens in collections that were purportedly black-and-white females, all of them were actually males of the Malay Staff Sergeant. This paper and discovery is hence of major taxonomic significance. It changes the identification keys and descriptions of Athyma reta and its related species. 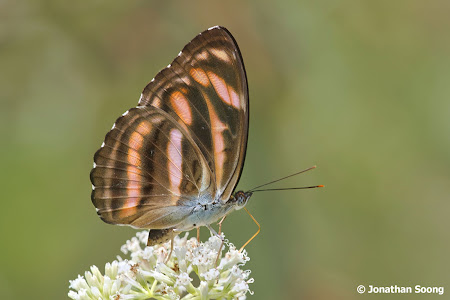 Whilst the paper is prepared with the expected scientific rigour and detailed research commensurate with the standard of a peer-reviewed scientific publication, many layman readers may find the level of information rather daunting to try to understand. Hence, what do the conclusions and outcomes generally mean for the nature enthusiasts, hobbyists, photographers and layman readers on social media and online platforms? 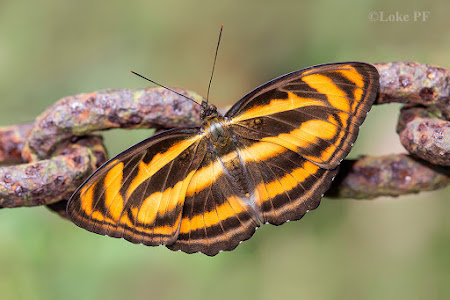 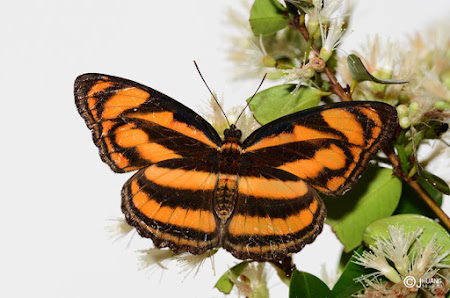 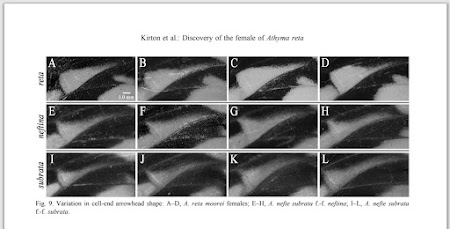 Comparison of the forewing arrowheads in museum specimens

Basically, to many of us who are out in the field, and who are interested in photographing butterflies and trying to put accurate names to what we have shot, the paper tells us that :
a) the species Malay Staff Sergeant is sexually dimorphic - the male is black-and-white and the female is black-and-orange.
b) the female resembles the female of the more commonly seen species, the Colour Sergeant's orange female form-neftina.
c) many of our images that we have labelled as Colour Sergeant female f-neftina may actually be a female of the Malay Staff Sergeant.

So how do we differentiate the two? In the paper, two reliable key diagnostic characteristics that separate the two species are described :
a) the thoracic band on the upperside of the butterfly. It is orange or yellow in the Malay Staff Sergeant, but is white in the Colour Sergeant female f-neftina.
b) In the Malay Staff Sergeant, the upper margin of the basal half of the cell-end arrowhead is convex, whilst in the Colour Sergeant, it is concave. 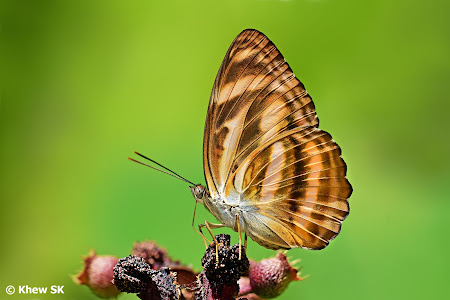 Colour Sergeant female f-neftina - on the underside, the markings and bands are narrower, with a light pinkish tinge 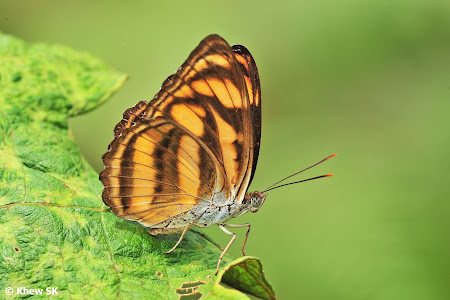 Malay Staff Sergeant female - on the underside, the markings and bands are much wider, and generally pale orange.

Other less reliable (or visually discernible) differences are :
a) wider orange markings in Malay Staff Sergeant.
b) clearer submarginal spot in space 4 of the forewing upperside between the postdiscal and narrow marginal bands
c) a generally stronger orange colour on the underside
d) more orange scaling flanking the underside markings
e) pale orange underside bands and spots, instead of almost white with pink/orange tint in the Colour Sergeant. 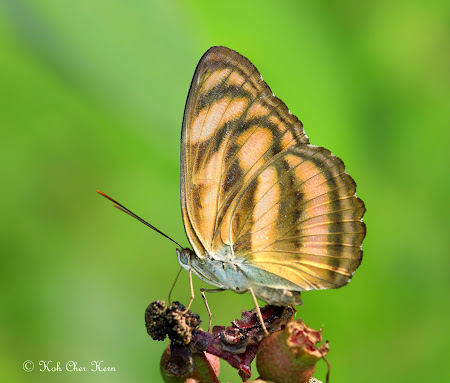 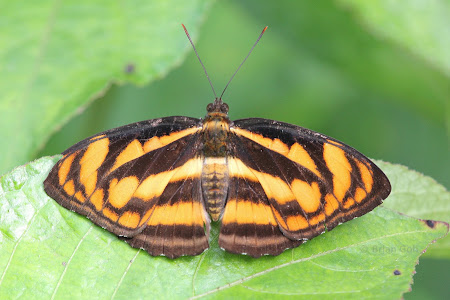 The paper is a good example of cross-border collaboration between Malaysia and Singapore, with Dr Laurence Kirton and Dr Phon Chooi Khim coming in to present the findings in a manner that meets the stringent requirements of a refereed journal like the Raffles Bulletin of Zoology. They used their expertise to analyse the data from various perspectives and putting across the findings and observations with full scientific rigour. 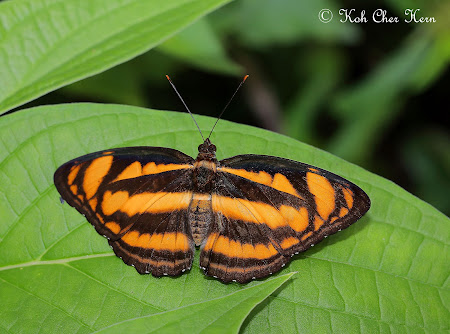 Finally, the elusive female Malay Staff Sergeant has been discovered. It was there all the time, in museum and private collections, and photographic folders on our hard drives. It was indeed "hidden in plain sight" all this time. For those of us with photos that have been filed as Colour Sergeant female f-neftina, it is time to take a re-look at our archives.  You may have a shot of that elusive female Malay Staff Sergeant after all! 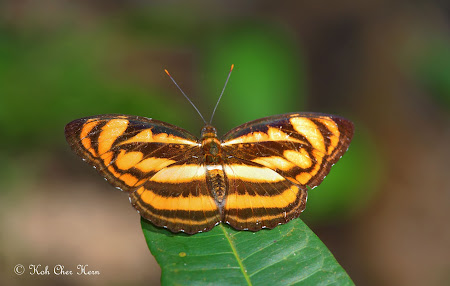 Posted by Commander at 8:04 PM 0 comments