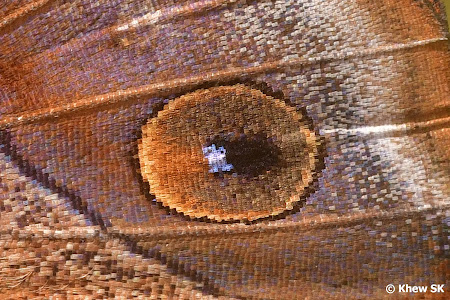 An eyespot on a butterfly's wing, complete with "pupil and iris", and a reflective highlight - all created by the evolutionary adaptation of the scales on the wings


The intricate patterns, markings and colours of a butterfly's wings have long intrigued researchers, many of whom have postulated theories and possible reasons for these markings. Whether these are striations, bands, structural colours, iridescent markings or eyespots, their functional origins or objectives have often been a source of debate amongst scientists. 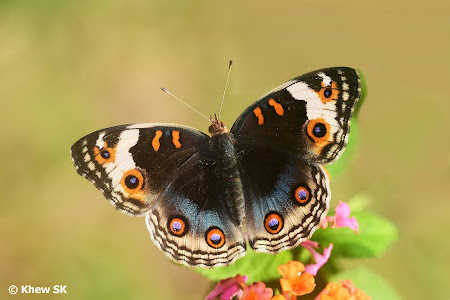 
The amazing array of designs and spectrum of colours on a butterfly's wings have been admired by nature enthusiasts and butterfly watchers. From black-and-white patterns to multi-coloured designs, each species of butterfly is unique in its own right. Combined with the morphological attributes of wingshape, size and so on, these features are often used for the basic identification of the different species of butterflies. 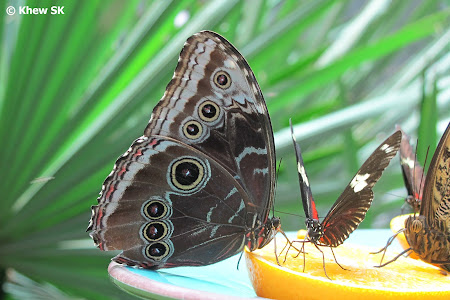 
Other than just for pure aesthetic reasons to look 'pretty', observers and scientists have been searching for answers as to why the patterns and colours on butterflies' wings are presented in such a way and if there are evolutionary functions of these patterns and markings, whether viewed individually or as a group, to resemble or mimic other organisms. 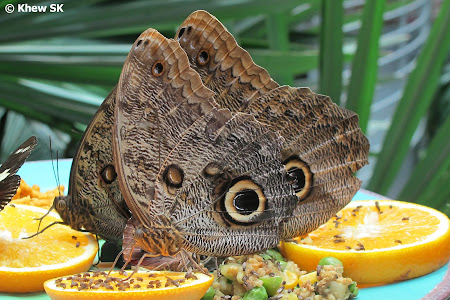 
One of the often-studied features of a butterfly's wing patterns is the presence of ocelli (singular : ocellus) or referred to as "eyespots" on the wings. Eyespots may be a form of mimicry in which a spot on the wings of a butterfly may resemble an eye of a much larger animal to deceive potential predator or prey species. Eyespots may also play a role in intraspecies communication or even in courtship. 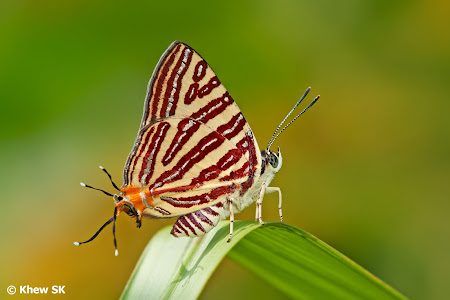 The modified ocelli at the tornal area of the hindwing of the Long Banded Silverline, complete with false antennae moving in the wind, are designed to fool predators into attacking a less critical part of the wings

In some cases, like in Lycaenidae species, the eye spots are a form of self-mimicry, to draw a predator's attention away from the most vulnerable body parts. Coupled with striations which draw attention to the eyespots and the butterfly's wing movements, this form of decoy mimicry has been well studied. 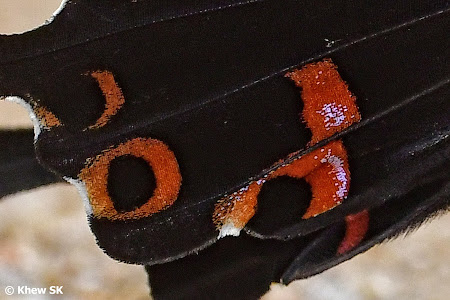 Large tornal "eyes" on a Great Helen's hindwings with its spatulate tails - designed to confuse predators?


Let us take a look at some examples of ocelli-adorned species across the different families of butterflies in Singapore. The Papilionidae do not generally employ ocelli patterns on the majority of the species in the family. A few species like the Helens and Great Mormons feature large tornal ocelli that suggest that these eyespots may be some form of decoy that could either scare predators into thinking that they are dealing with a large animal with red eyes, or perhaps direct a predator to a less fatal spot to attack. 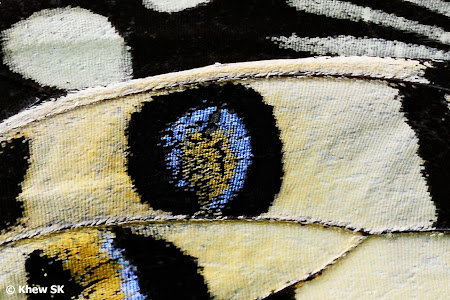 An eyespot on the underside of a Lime Butterfly.  A mere decorative feature, or an eyespot designed to confuse predators?


The Pieridae species of "Whites and Sulphurs" have wings that feature streaks, spots and stripes, but have no particular strong association with the use of ocelli for any form of mimicry or protection. Many of the species of this family display aposematic colouration or simply use their flight speed to avoid predators. 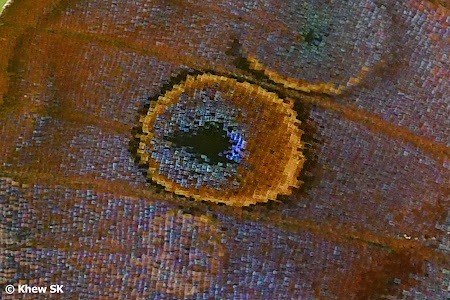 Amongst the subfamilies of the family Nymphalidae, the use of ocelli-like patterns on the wings appear to be mainly limited to the subfamilies Satyrinae and some genera of Nymphalinae. The other subfamilies are generally patterned with stripes and other forms of designs, and usually coloured beautifully. 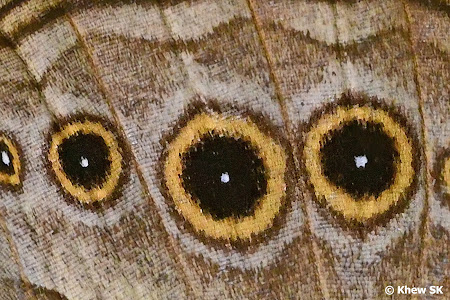 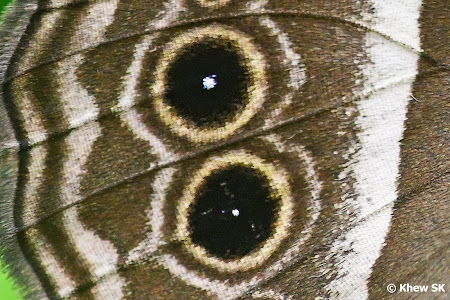 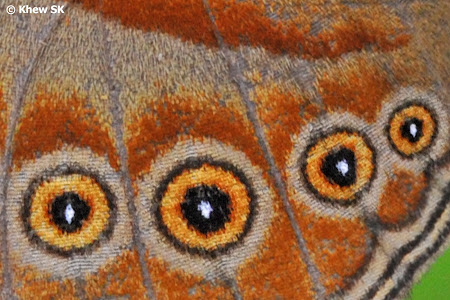 
The Satyrinae in particular, have several genera that have wings adorned with ocelli, e.g. Orsotriaena, Mycalesis, Ypthima, and many others. With the majority of the species in the subfamily that are not known to be distasteful to predators, it is likely that the use of ocelli on their wings give some measure of mimetic decoy as protection from predators. 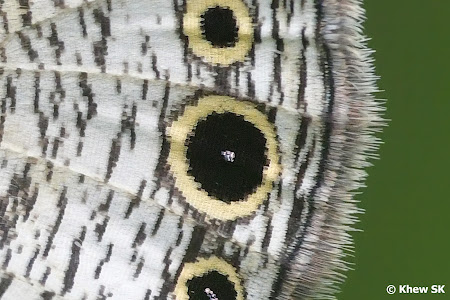 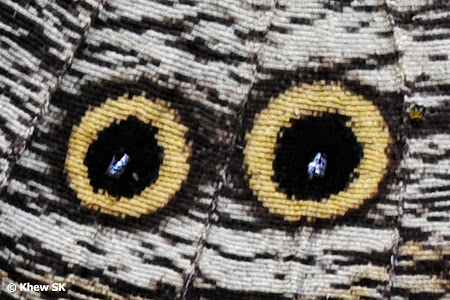 Ocelli on the hindwing of Ypthima species


The Mycalesis or Bush Browns, and the Ypthima or Rings, have many ocelli on their fore-and hindwings as well as on the uppersides and undersides of their wings. Whether these eyespots are meant to intimidate, confuse or misdirect predators would be an interesting subject for researchers to further investigate. 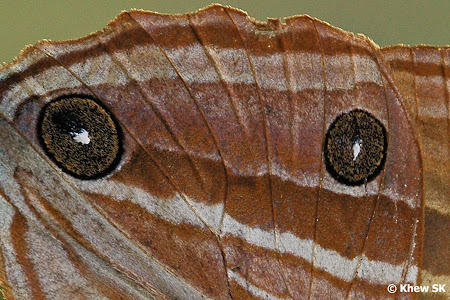 "I'm looking at you!" - Eyespots on the hindwing of a Palm King (Amathusia phidippus)


Amongst the larger species of butterflies, formerly placed in the Morphinae subfamily, are also examples that feature large animal-like eyespots, particularly on the undersides of the wings. These species tend to lurk in the shaded understorey of forested areas and camouflage themselves well. These eyespots may fool predators into thinking that they are dealing with a larger animal. 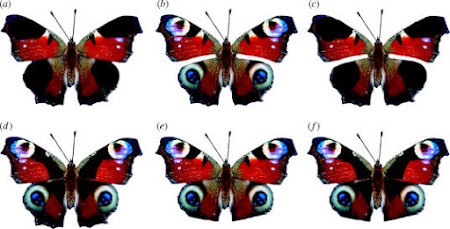 
The studies of ocelli and their effect on predation have been largely done by western researchers and the experiments conducted by the Swedish researchers, particularly on the European Peacock butterfly (Inachis io) have produced evidence that these eyespots do deter predators like birds from attacking the butterflies. Essentially, the researchers painted over the ocelli for some of the butterflies and studied them together with the normal individuals and how predators react to them. 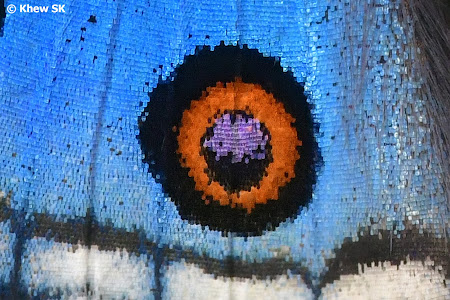 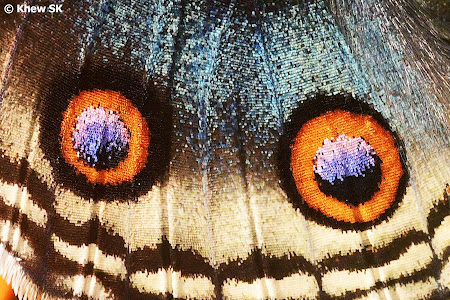 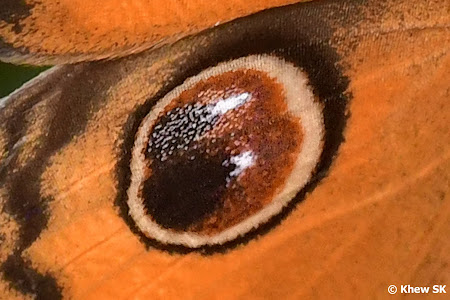 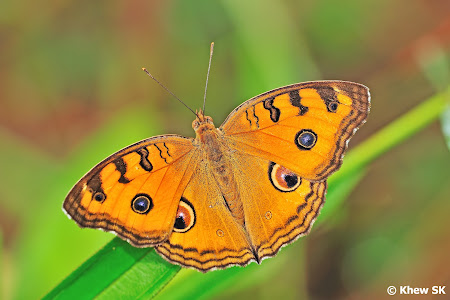 Colourful eyespots on the wings of Junonia spp.

Our local species in the Junonia genus, collectively called the Pansys, offer an almost similar range of ocelli-adorned species as the European Peacock. The Blue, Peacock, Chocolate and Grey Pansy species all have an interesting array of ocelli on their wings that probably function in the same way as their European cousins where the "eyes" are used to intimidate or deter predators. 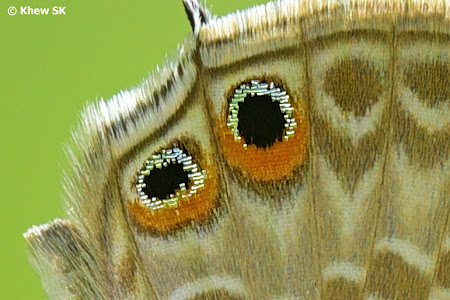 Adapted ocelli on the tornal edge of the hindwings of Lycaenidae


The Lycaenidae have evolved their utilisation of ocelli into what is referred to as auto-mimicry to fool predators into attacking a less important part of their wings. The eyespots are adapted to look like the head of an organism, usually complete with "antennae" and the movement of the butterfly's hindwings, to direct a predator to attack a less critical part of the butterfly. 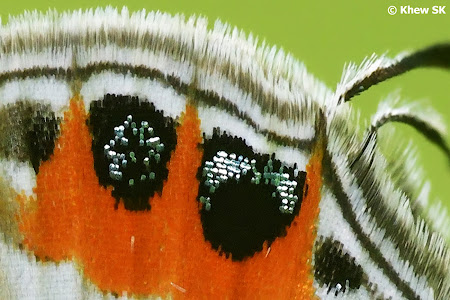 It is always interesting to observe how these Lycaenidae utilise colours, patterns and eyespots as a group of features to form a decoy to escape predatory attacks. Some of these eyespots come complete with silvery "eyebrows", orange and black eyespots and iridescent scales to emphasise an eyespot to attract a predator to "look at the wrong end" of the butterfly if it intends to attack.

Posted by Commander at 5:18 PM 0 comments