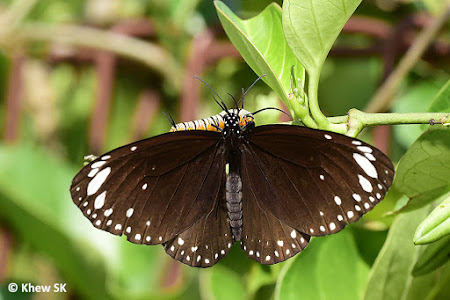 I witnessed a strange butterfly behaviour on Pulau Ubin recently. This male Spotted Black Crow (Euploea crameri bremeri) was seen "attacking" a late instar caterpillar of its own species. I observed that the caterpillar was crawling and munching at a stem of its host plant, when the male butterfly descended on it and repeatedly clawed at the caterpillar. 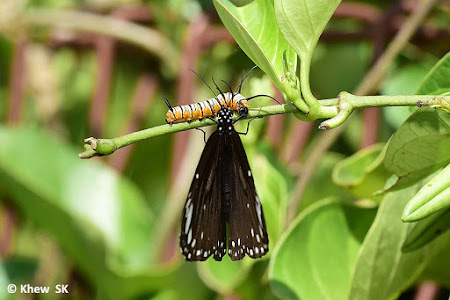 In the photo of the adult butterfly with open wings, the curved dorsum of the forewing confirms it as a male. It is not known whether the caterpillar is a male or female. The Danainae have been observed to use their sharp foreleg claws to scrape the leaves and seed pods of some plants so that the wounded plant oozes fluids that the butterfly feeds on. 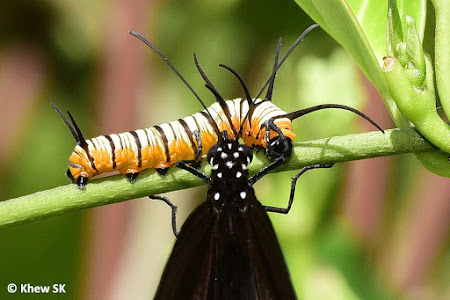 The sharp claws that can do damage to the plants can also inflict some serious damage to the caterpillar's skin. In the picture above, it can be seen that the butterfly is holding on to the caterpillar with its forelegs and the claws dug into it. This is the first time I have seen a butterfly "attack" a caterpillar although I wonder why it is doing so. A phenomenon known as "pupal rape" has been described for Heliconius butterflies where the males are observed to mate with a female even when it is still in the pupa!  But in this case, trying to mate with a caterpillar would be futile!


If anyone has any suggestions as to why this adult Spotted Black Crow is attacking the caterpillar (which is also of the same species) with its claws, please share your observations and opinions.

Text and Photos by Khew SK
Posted by Commander at 8:39 AM 0 comments