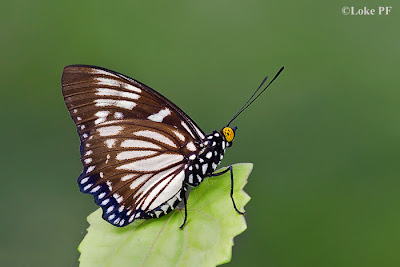 The Courtesan is a rare species in Singapore. There are certain periods in a year when an individual or two makes an appearance, after which the species completely disappears and not been seen for months, only to reappear again unexpectedly! It is not known to be a migratory species. There have been cases where its early stages - caterpillars and pupae, have been observed on its host plant, Trema tomentosa, which is a relatively common plant.
This male Courtesan was recently observed at a Park Connector and photographed by ButterflyCircle member Loke PF. The males have distinctive bright yellow eyes. Its forewings are deep bluish-black with a series of white spots and streaks. The underside is a pale brown with the white spots and streaks as on the upperside. There are two female forms of the Courtesan in Singapore, both of which are even rarer than the males. Both mimic the Magpie Crow a Danainae that is known to be distasteful to predators.

Posted by Commander at 2:43 PM 2 comments