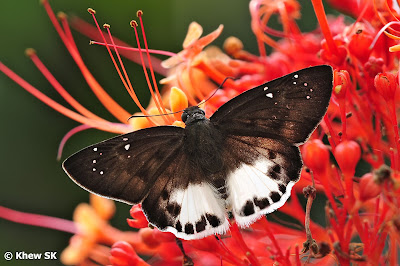 A pristine Ultra Snow Flat feeding at the flowers of the Pagoda Flower (Cleredendron paniculatum)
Someone recently remarked to me : "OMG! Is September around the corner already??". Yup. We had another month of "lockdowns", takeaway meals, WFH and the like. And almost another year that's been stolen from us by this COVID19. No travelling, no overseas work trips and a ton of leave to clear with nowhere to go. That's what life has become, as we try to imagine life after COVID - or rather, what life would be like, living WITH this virus around us. Already, the 3-digit daily infection numbers in Singapore seem to have lost its panic-inducing effect, and the general citizenry is slowly coming to terms with an "endemic" disease that we have to live with. 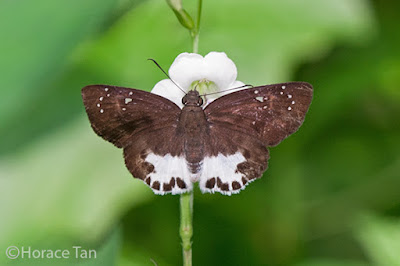 An Ultra Snow Flat feeding on the nectar of the Chinese Violet (Asystasia gangetica)
Somehow, the severe toll on certain businesses is expected, but not often openly publicised. There are hushed whispers of companies going under, salary cuts and retrenchments. But then again, there are still people who are leaving their present jobs. A strange phenomenon, but nonetheless true. Did the pandemic create an environment where workers have more time to reflect on what they really want to do? Or is there actually a manpower shortage out there which has created a demand that outstrips supply of manpower resources? 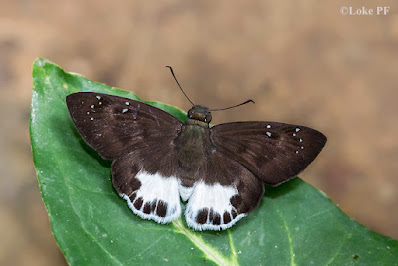 A sunbathing Ultra Snow Flat perching on the upperside of a leaf with its wings spread open flat
In the built environment industry, anecdotal information indicates that there are construction firms that are closing down, creating an even more critical demand for contractors and hence higher costs and long delays. Even the big boys are not spared. Projects are delayed, lives changed as Singaporeans have to forego plans to move into their much-anticipated new homes, costs escalating - resulting in more contractual disputes, and the list goes on. And yes, it's caused by an organism that is invisible to the naked eye! 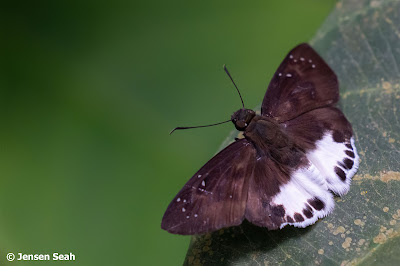 In spite of these negative environment, there are areas of optimism. The Tokyo Olympics "2020" were finally held in 2021. Life for the athletes went on. Gold medals were won, and the display of sportsmanship and camaraderie of fair competition carried into the spirit of the Games. Someone grabbed the bull by the horns and decisively pushed on with the Olympics and in the blink of an eye, it is over. Done. COVID or no COVID, Japan moved on. 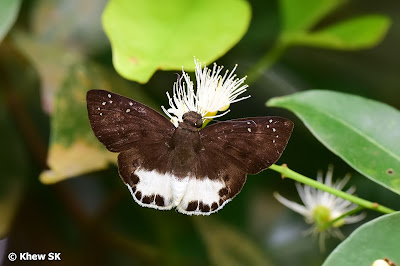 Over in Singapore, we celebrated Singapore's 56th year of independence. For the first time in history, the National Day celebrations were postponed. It was at the height of another surge in infections, as the government tried to move the vaccination programme forward - 60%, 70%, 80% of the population was fully vaccinated - day by day. Statistics also showed that people who were vaccinated but infected with the virus had milder symptoms or are able to recover better than those who were not. But there is a proportion of residents who are not vaccinated - either because they cannot be, or do not want to be. 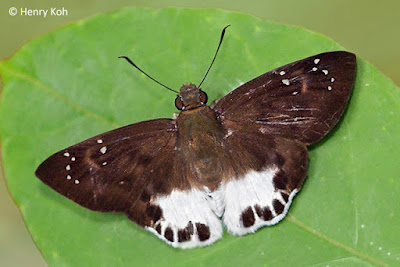 But enough of the virus already. We turn to our Butterfly of the Month for August 2021 - the now moderately rare Ultra Snow Flat (Tagiades ultra). It was re-discovered in the 1990s and reinstated in the Singapore Checklist as extant. Perhaps due to its behaviour and shy nature, this species has often been elusive. But there have been regular sightings by nature enthusiasts and photographers in various areas across the island. It is certainly a resident species, as long as its caterpillar host plant, Dioscorea glabra is available. 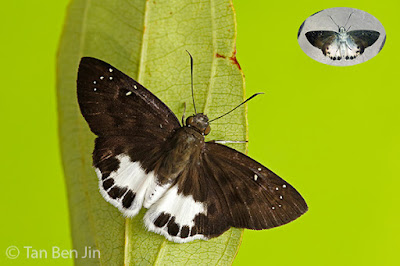 The Ultra Snow Flat is one of four species of the genus Tagiades found in Singapore. Referred to as the "Snow Flats" the common name probably refer to the snowy white hindwings (except for the Common Snow Flat, which has bluish-white undersides) and the typical behaviour of the Pyrginae subfamily of skippers that stop with their wings opened flat. 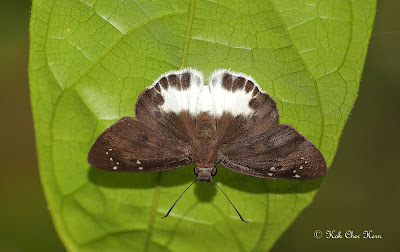 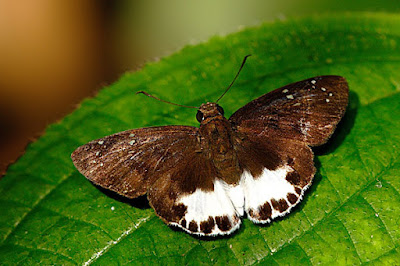 They are often active in the cooler hours of the day, in the morning and evening, and can also be observed feeding at flowering plants for nectar. They can be spotted sunbathing on the tops of leaves in the early morning hours, but when the sun shines and warms up the environment, the Ultra Snow Flat then changes its behaviour and perches on the undersides of leaves with its wings spread open flat. And this is how many photographers encounter this species. 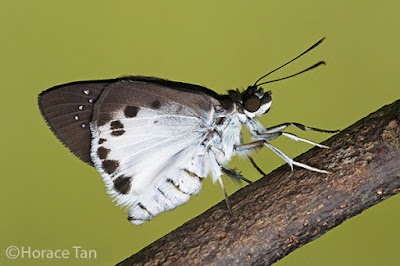 A rare underside shot of the Ultra Snow Flat with its wings folded upright
The Ultra Snow Flat is dark blackish-brown above with a series of hyaline spots on the forewing. The large dark submarginal spots on the hindwing can sometimes be conjoined and there is high variability in the sizes and arrangements of these spots. But there is always a full complement of spots at the whitened tornal area of the hindwing. On the underside, the white area is more extensive. 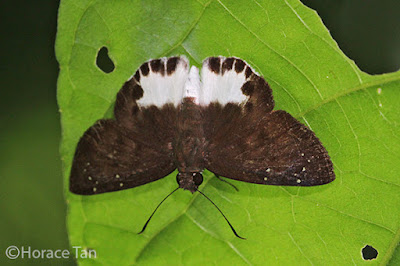 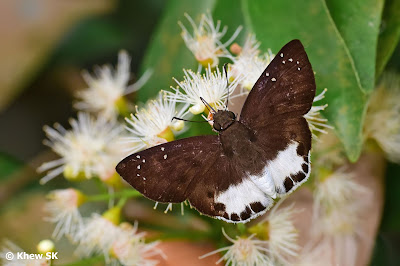 An Ultra Snow Flat feeding at the flowers of Syzygium zeylanicum 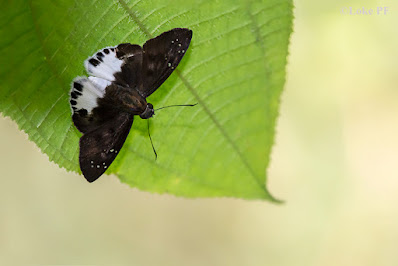 A typical underleaf pose of the Ultra Snow Flat
The species is a fast flyer and can be quite skittish. When alarmed, it zips away and hides on the undersides of leaves, usually closer to the ground. Even when feeding at flowers, the wings are spread open flat, such that there are very few field shots showing the underside of the Ultra Snow Flat, where it closes its wings upright. 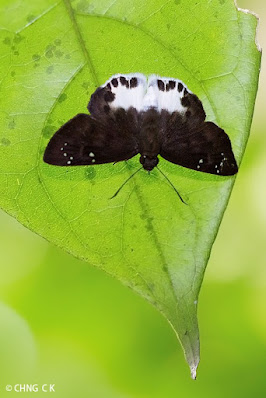 The caterpillars of the Ultra Snow Flat feeds on the vine Dioscorea glabra on which it has been successfully bred in Singapore. The host plant is usually found in the forested nature reserves of Singapore where it creeps low amongst the shrubbery. The full documentation of the life history of this species can be found here.
Text by Khew SK : Photos by ChngCK, Federick Ho, Khew SK, Henry Koh, Koh CH, Loke PF, Jensen Seah, Horace Tan and Tan BJ.
Posted by Commander at 6:29 PM 2 comments