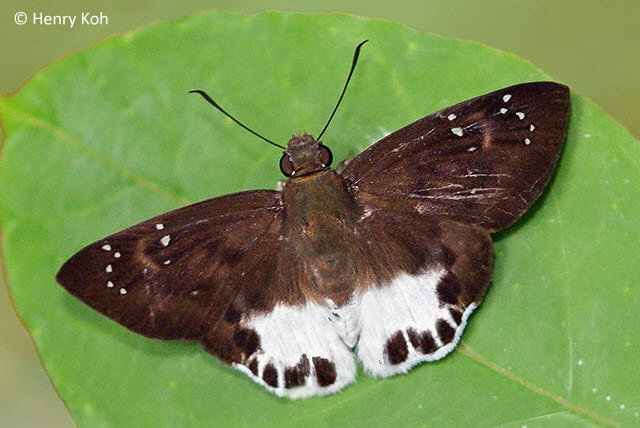 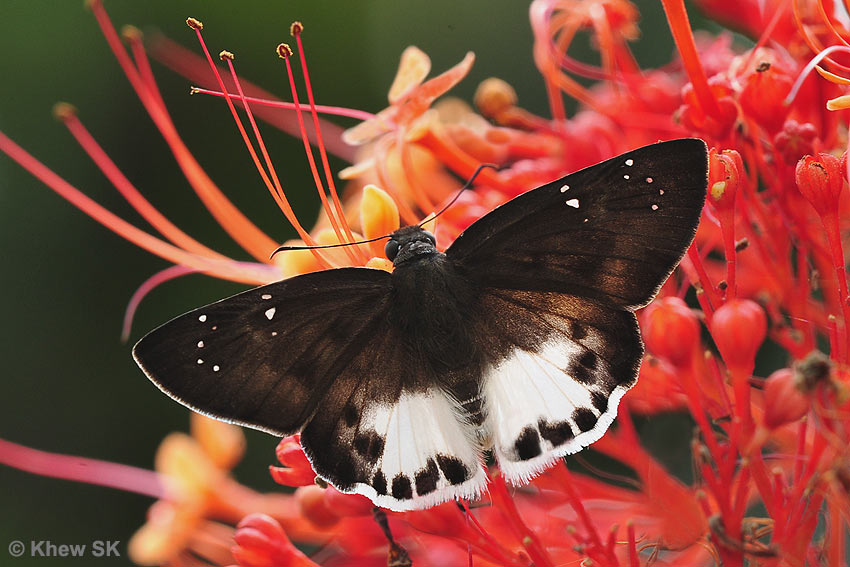 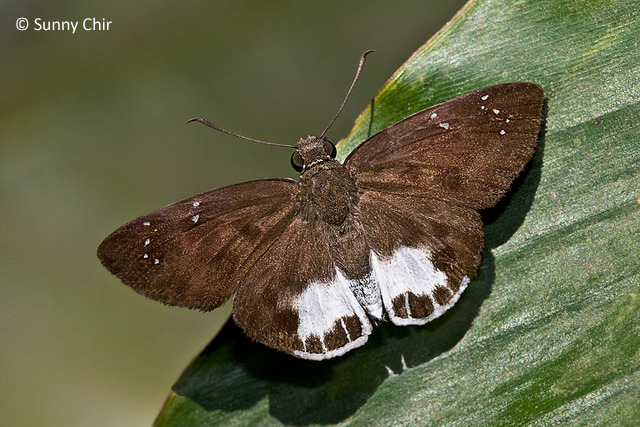 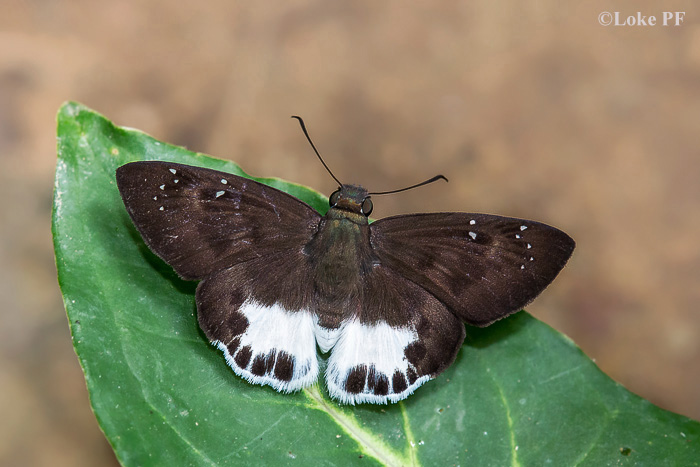 On the upperside, the wings are dark brown. On the forewing, there is a white hyaline spot in each of spaces 4,5,6,7,8 and 11.  The forewing cell features an upper spot, which usually accompanied with a smaller lower spot. On the hindwing, there is a large white tornal area with its inner edge reaching vein 6. In this whitened area,  there are black marginal spots at the end of veins 1b, 2 3 and 4. There are additional black post-discal spots in spaces 5 and 6, lying at the edge of the whitened area. Underneath, the wings are similarly marked as per above but with the whitened area on the hindwing   extended to the basal area. 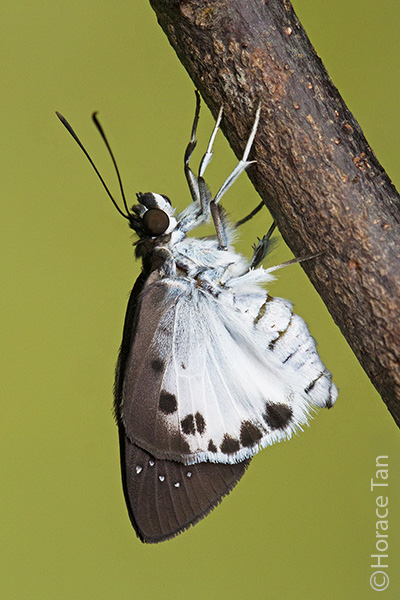 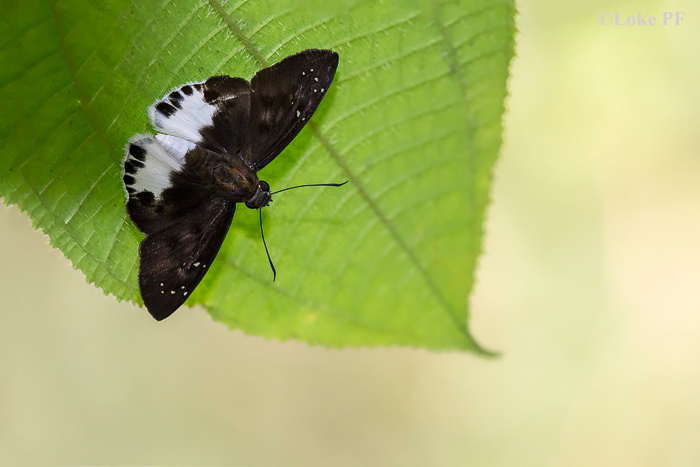 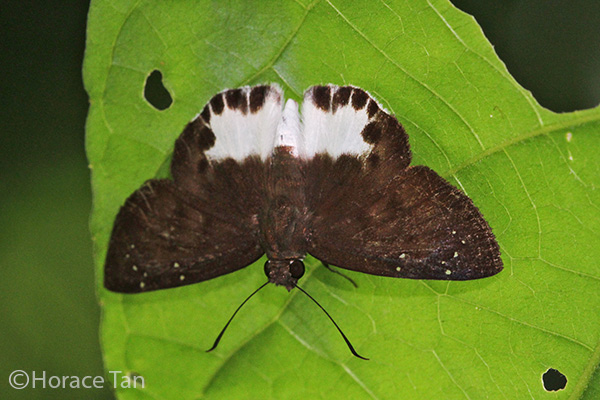 A Ultra Snow Flat perching on the underside of a leaf.

Field Observations of Butterfly Behaviour:
This species is moderately rare in Singapore and its distribution is restricted to forested areas of the catchment reserves and in western wastelands. The adults are strong flyers and are more active in the cooler hours of the day. As is the case for the other Tagiades species, the adults have the habit of perching on the underside of a leaf between flights, and with its wings opened flat. 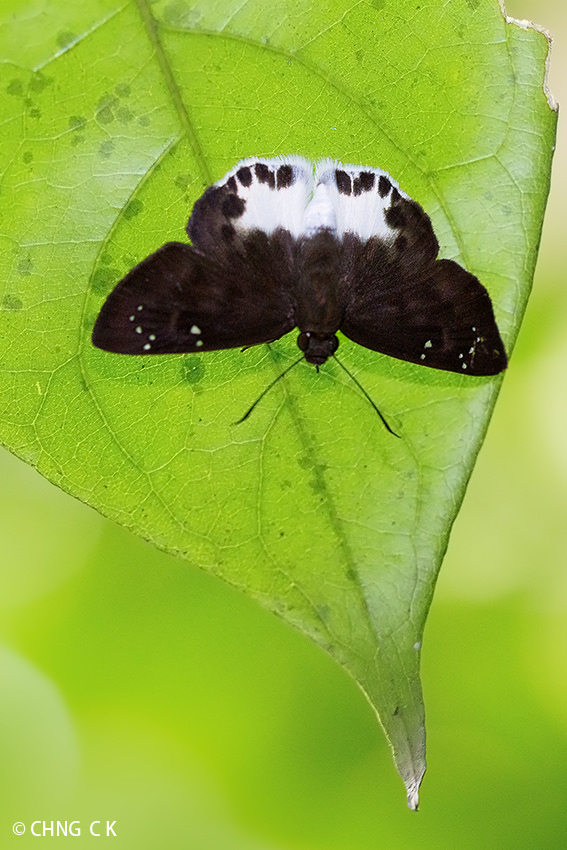 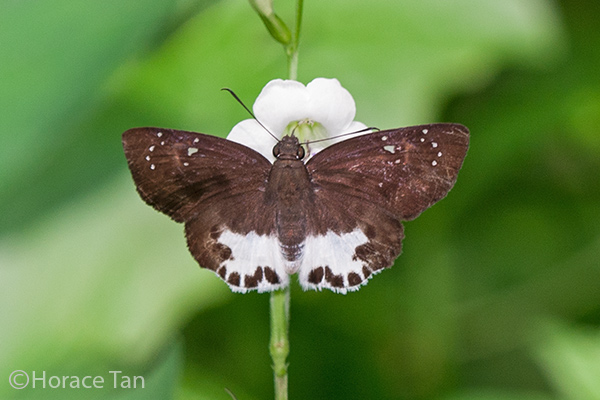 A Ultra Snow Flat visiting a flower of Asystasia gangetica in a western wasteland.

Early Stages:
To date only one local host plant, Dioscorea glabra, has been recorded for the Ultra Snow Flat. This plant can be found growing at a few sites within the local nature reserves. It is possible that some other Dioscorea spp. present in the nature reserves could turn out to be the larval host with further field observations. The caterpillars of the Ultra Snow Flat feed on leaves of the host plant. When not feeding, the caterpillars seek  safety and concealment in a leaf shelter formed  by cutting and folding a leaf fragment along the edge of the leaf. 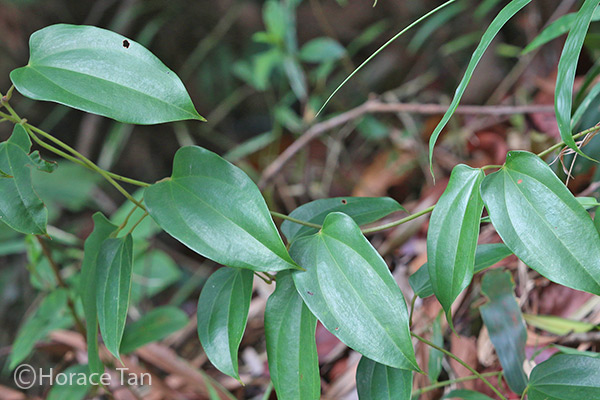 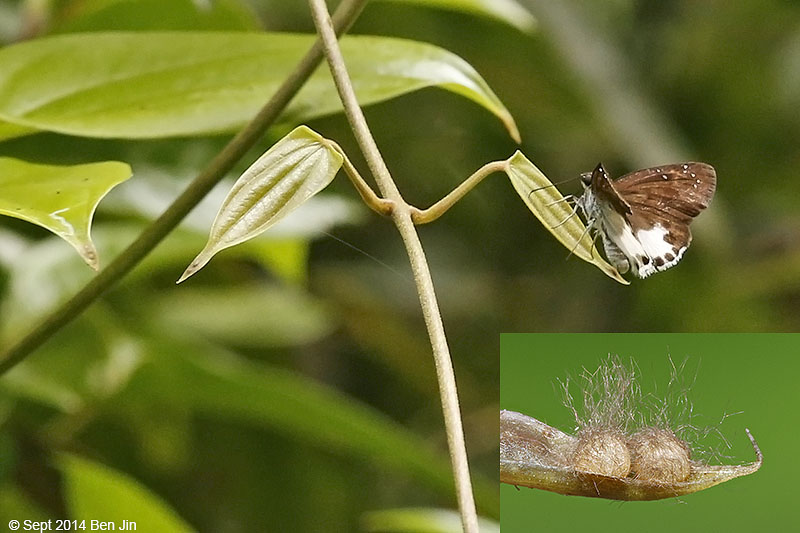 A mother Ultra Snow flat ovipositing on a young leaf of Dioscorea glabra.

The eggs of the Ultra Snow Flat are laid singly or in small groups of 2 to 3 on the leaf surface (typically near the leaf tip) of a young leaf  of the host plant. The pale brownish egg is hemispherical with surface marked with longitudinal ridges running from the pole to the rim of the base. The egg is well concealed in a mass of very fine and pale brownish setae deposited by the mother butterfly. Each egg has a basal diameter of about 0.8mm. 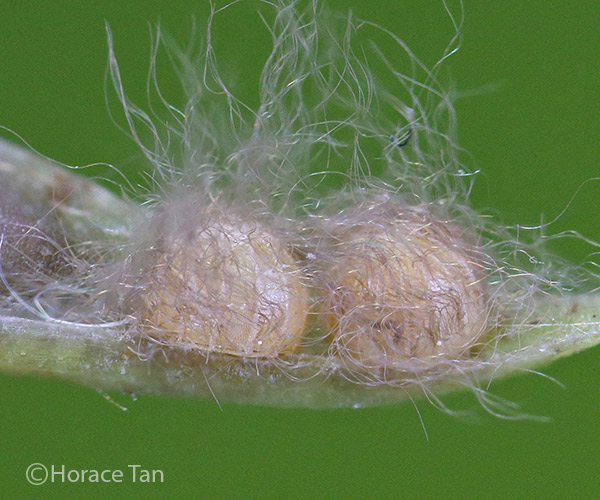 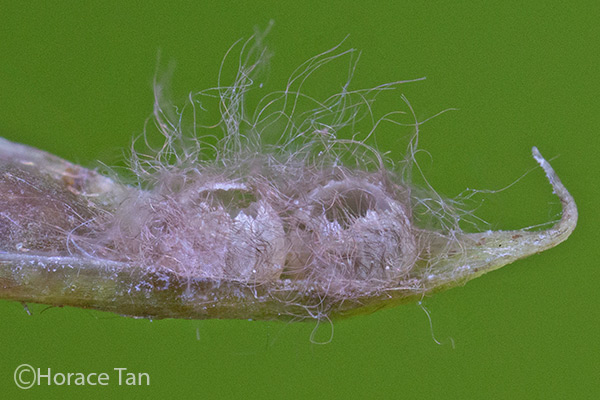 The empty egg shells of the same two eggs after the caterpillars have emerged.

The egg takes about 3-4 days to hatch. The young caterpillar emerges by eating away the polar  part of the egg shell. The rest of the egg shell is not eaten by the newly hatched which is about 2mm in length. The yellowish body is roughly cylindrical in shape and the head capsule is black in color. A prominent, black collar mark is present on the dorsum of the prothorax. 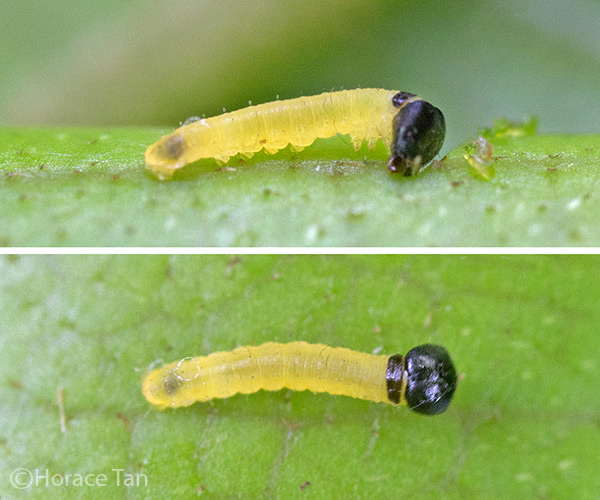 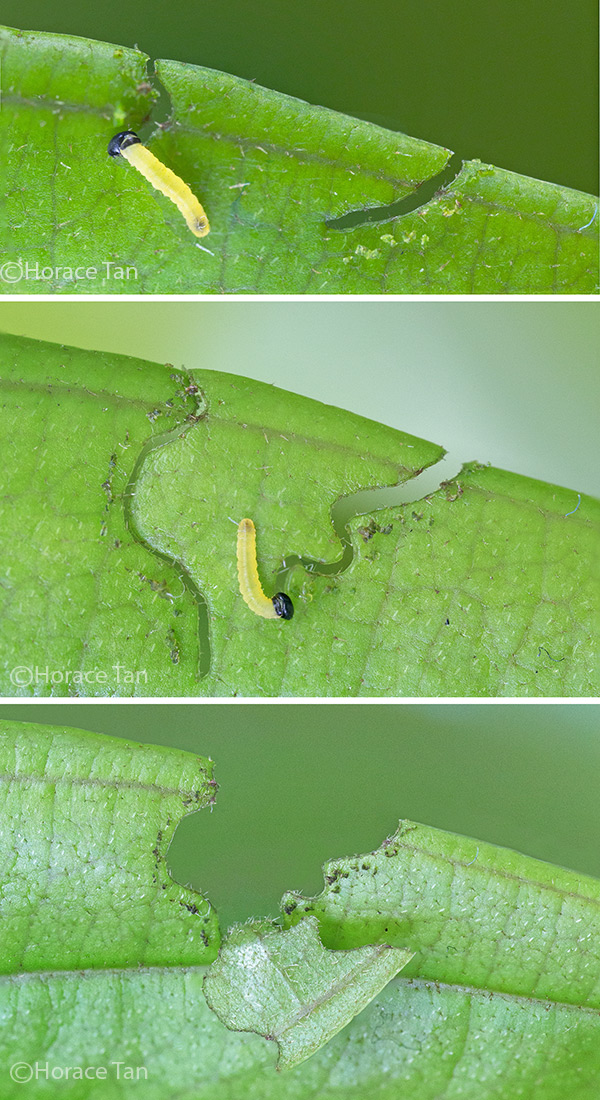 A sequence of three shots showing the construction of the very first leaf shelter by the newly hatched.

The newly hatched makes its way to the leaf edge to  construct its very first  leaf shelter right away.  It ventures out of the shelter from time to time to feed on the leaf lamina in the vicinity. As the caterpillar grows, the body assumes a green undertone. After reaching about 4.5mm in about 2.5-3 days, the caterpillar moults to the 2nd instar. 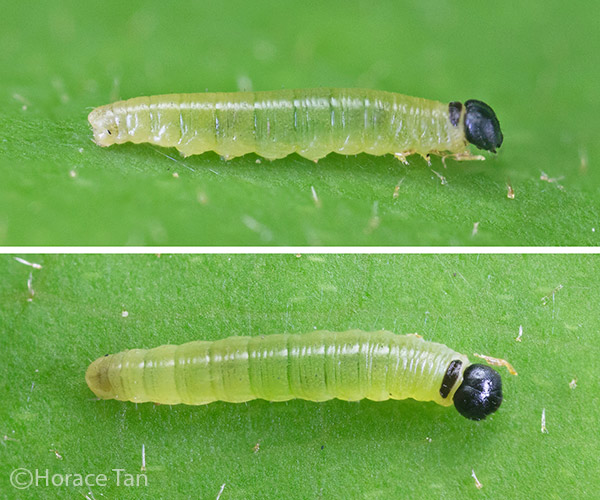 The body of the 2nd instar caterpillar is pale whitish to yellowish with a green undertone. There is no trace of the black collar mark on the prothorax seen in the 1st instar. The head is black and broadened sideways to two short tips at the upper end. The surface of the body is dotted with numerous tiny whitish speckles. This instar lasts about 2.5-3 days with the body length reaching about 7.5mm. 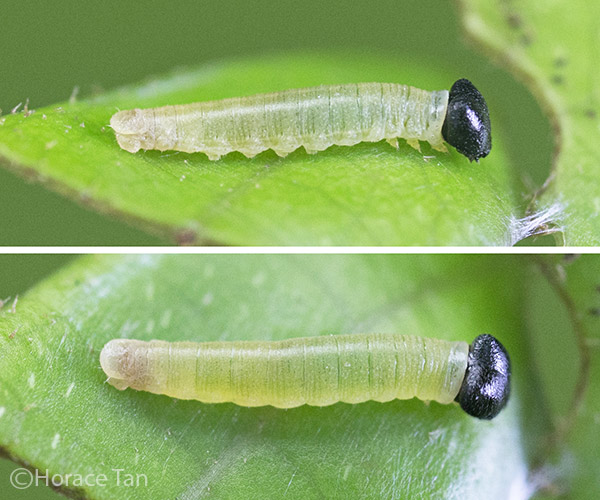 Two views of a 2nd instar caterpillar, early in this stage, length: 4.75mm. 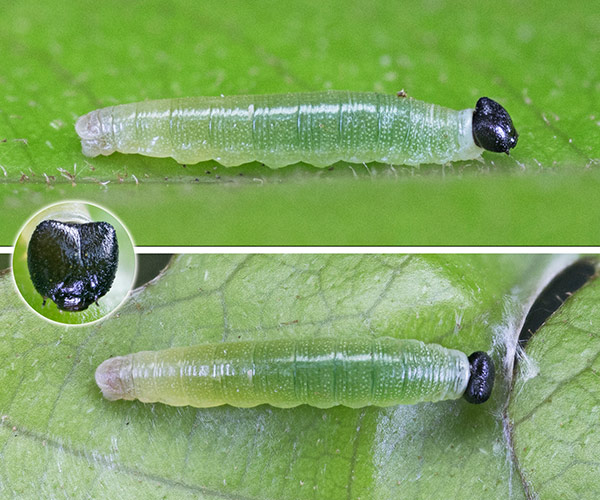 Two views of a 2nd instar caterpillar, late in this stage, length: 7.2mm.

The 3rd instar caterpillar closely resembles the 2nd instar caterpillar. The head capsule is still black but broader sideways and with the two raised tips more prominent. The tiny speckles are now mostly yellowish. This instar takes about 3 days to complete with body length reaching about 12-13mm. 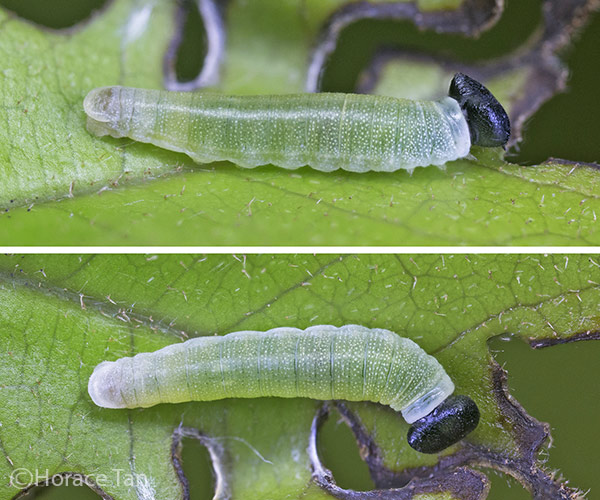 Two views of a 3rd instar caterpillar, early in this stage, length: 7.5mm. 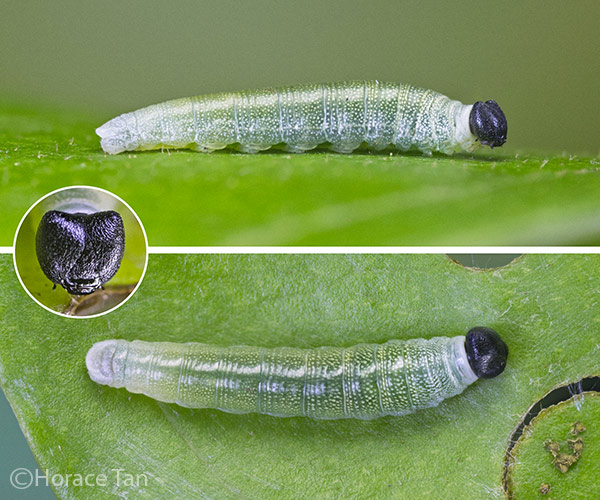 The 4th instar caterpillar is little changed from the 3rd instar in both body markings and coloration. This instar lasts about 4 days with body length reaching about 22-24mm. 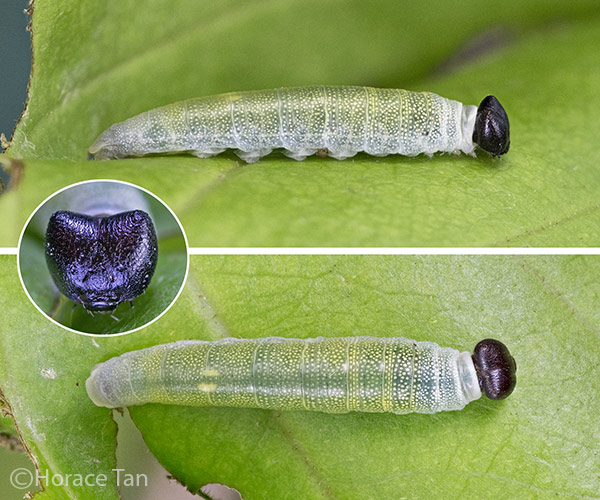 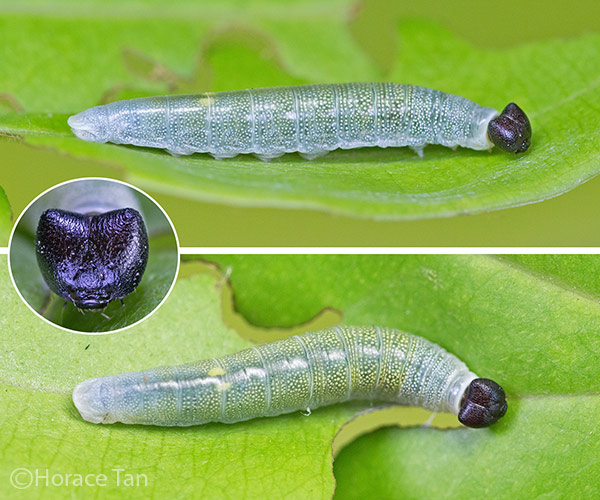 The 5th instar caterpillar has similar body markings as in the 4th instar but the colour of its head has become pale reddish brown. As growth progresses in this instar, the body markings become increasing yellowish. The 5th instar lasts for about 6-7 days, and the body length reaches up to 34-36mm. 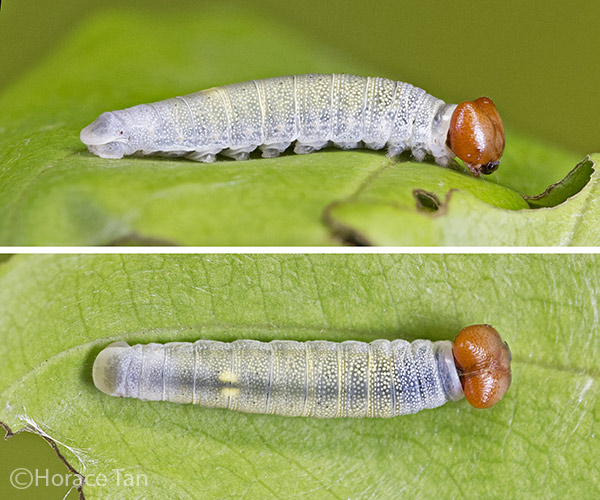 Two views of a 5th instar caterpillar, early in this stage, length: 20.5mm. 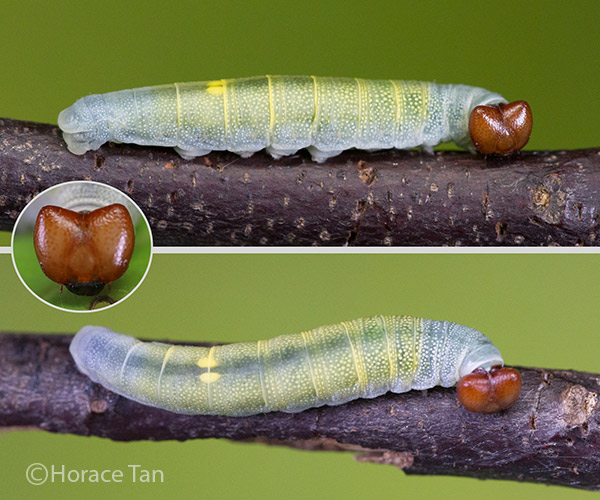 Two views of a 5th instar caterpillar, later in this stage, length:36mm.


On the last day of 5th instar, the body decolorises  to a very pale shade of yellowish green. The caterpillar ceases feeding and confines itself to the leaf shelter. The pre-pupatory larva prepares for the pupal phase with a series of silk construction work with the main pieces being a silk girdle across the dorsum of its early abdominal segments, and a short and thickened transverse silk band on the substrate at its posterior end. Soon the pre-pupatory larva becomes dormant in its leaf shelter. Pupation takes place about 1 day later. 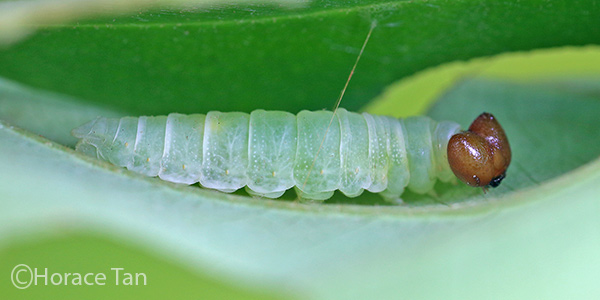 A pre-pupa of the Ultra Snow Flat.


The girdled pupa is secured with its cremaster attached to the short transverse band on the substrate. It has a short thorax, a rather long abdomen, a pointed rostrum and two small ear-like appendages at the leading edge of the mesothorax. The body is pale beige brown with two large triangular white patches at the two ends of the wing pad. Length of pupae: 20.5-21.5mm. 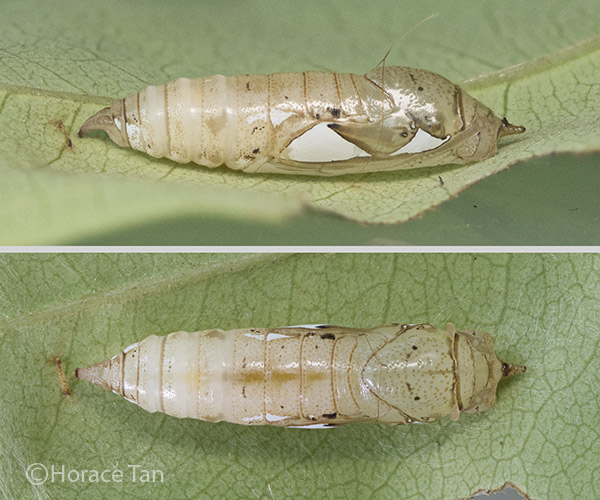 Two views of a pupa of the Ultra Snow Flat.


After about 7 days of pupal development, the pupal turns dark in the wing pad and thorax areas. The following day, the adult butterfly emerges from the pupal case. 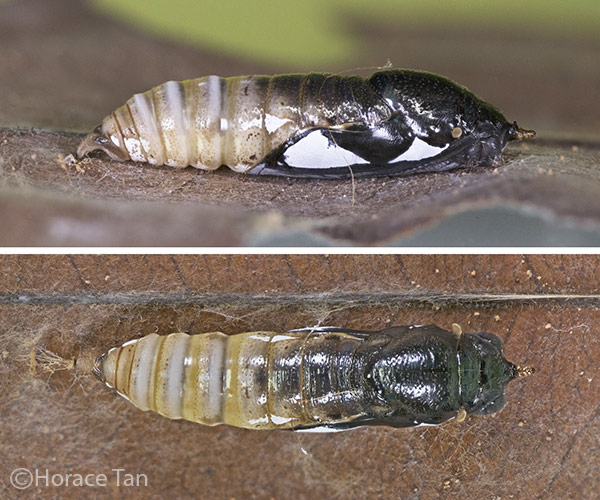 Two views of a mature pupa of the Ultra Snow Flat. 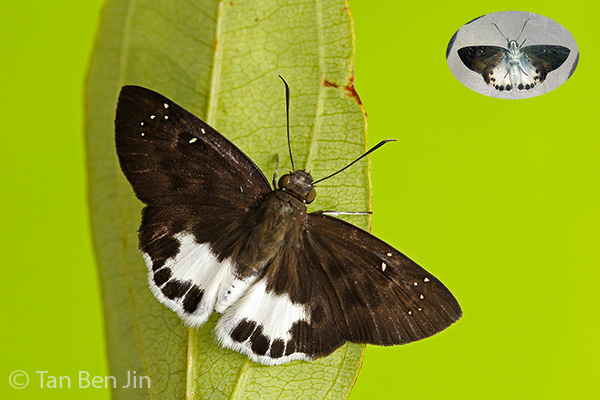 A newly hatched Ultra Snow Flat, with the inset showing its underside.