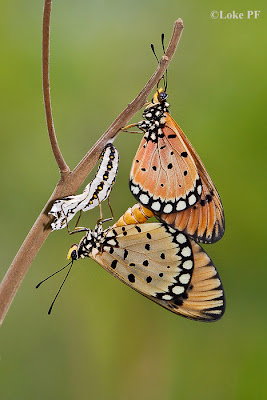 The Tawny Coster is a "foreign talent" that has migrated to Singapore over the past years and has made our little island in the sun its home since 2006.  It is relatively common and widespread in Singapore, being most often observed in urban and secondary forest areas where its caterpillar host plant, Passiflora foetida grows.
In this week's gallery, we feature a shot taken by ButterflyCircle member Loke PF, who chanced upon this mating pair where the female had just eclosed (and still clinging onto her empty pupal shell) In nature this happens fairly often, where the "early bird catches the worm", or in this case, where the male lies in wait to mate with the female just as she ecloses (or even before!). In extreme cases, particularly in the documented observations of species in the Heliconiinae sub-family, "pupal rape" occurs where the male mates with the female of the same species even when she has yet to eclose, by tearing through the pupal shell!
Posted by Commander at 11:01 AM 0 comments