Black and White
Featuring some black and white butterflies 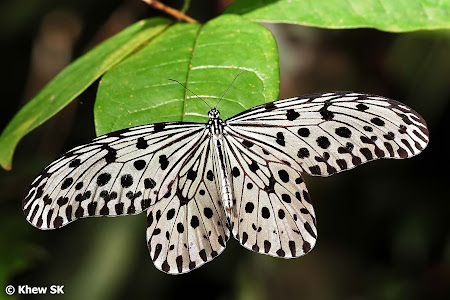 Butterflies are traditionally portrayed as pretty insects adorned in all colours of the spectrum, fluttering gracefully amongst flowers. Moths, on the other hand, are often depicted as drab ugly creatures that only fly at night. In nature, and amongst Lepidoptera, this may be furthest from the truth! 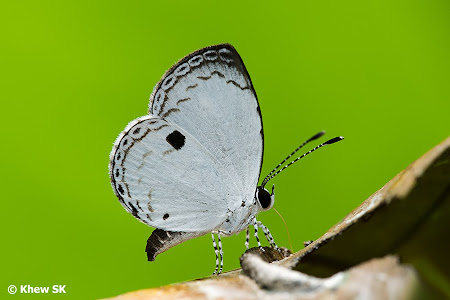 There are numerous colourful moths in our environment - some even more spectacularly coloured than butterflies. On the other hand, there are also many drab-coloured and relatively unattractive butterflies. The colour of a butterfly's wings are often the subject of attention and enthusiasts tend to assess a butterfly's "attractiveness" by the colour and pattern of its wings. 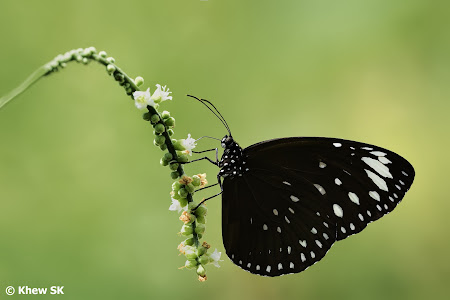 However, like all of Mother Nature's creations, there is always a great diversity in the appearance of our natural world. Butterflies are no exception. This blogpost takes a look at some species of butterflies whose wings do not feature any colour of the visible spectrum, but are predominantly black and white, both on the upperside and underside of their wings. 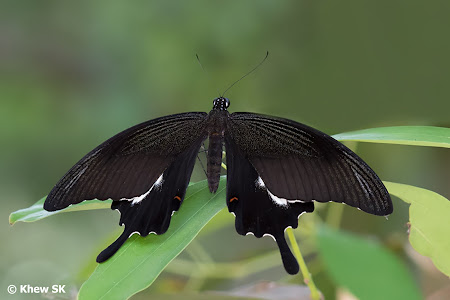 Almost all black and white, the Helens have red or blue ocelli adorning their hindwings


Amongst the Birdwings and Swallowtails in Singapore, there are some species that have primarily black wings with some white patches. However, many of these also feature red, blue and other coloured lunules/eyespots that would make them more 'colourful' than just appearing as black and white butterflies. 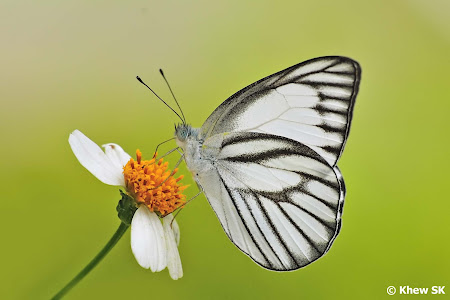 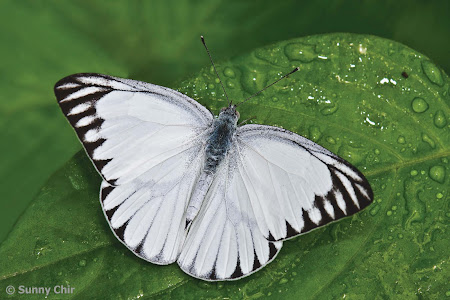 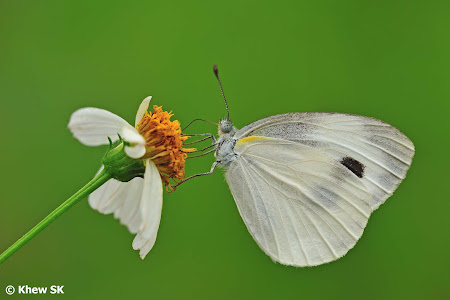 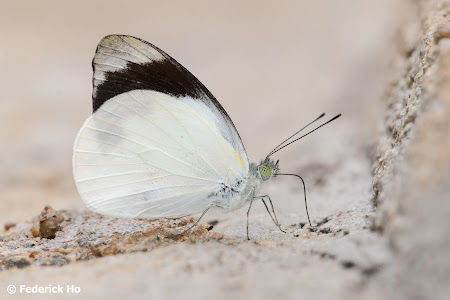 Amongst the Pieridae are some species that are mainly white in appearance, with their veins or wings featuring black borders and margins. Some of these species would qualify as black and white candidates in this article. The male Striped Albatross, the Cabbage White and the seasonal migrant, the Plain Puffin can all be considered black and white species in this family. 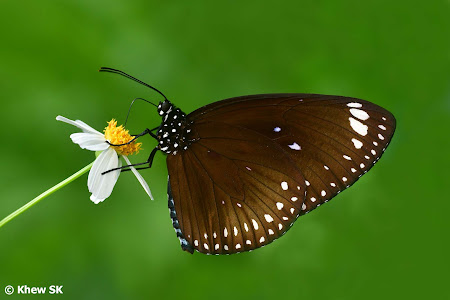 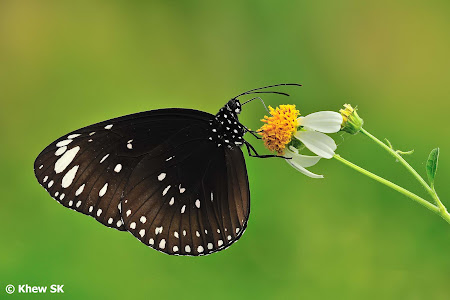 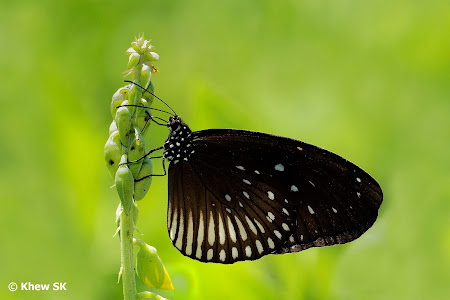 
The next group would be the Danainaes, of which the Crows in particular, feature a few species that are predominantly black, with some white spots and streaks on the wings. The Crows appear black as compared the Albatrosses in the preceding family that appear white. The noteworthy species are the Spotted Black Crow, Malayan Crow, King Crow, Blue Spotted Crow and Striped Black Crow that would qualify as black and white species. 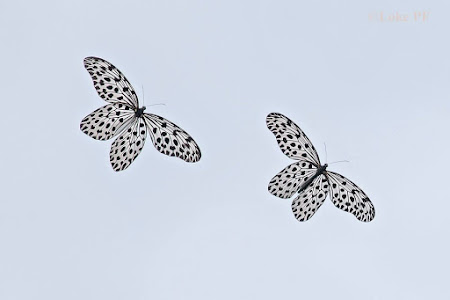 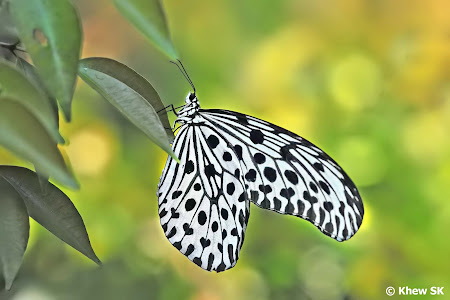 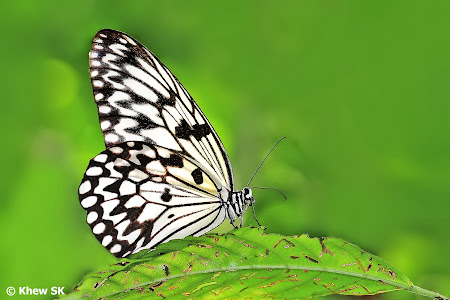 
Also amongst the Danainaes, are the Idea species or more popularly called the Tree Nymphs. These are large and spectacular black and white butterflies that are attractive in their own right, despite not have any other prominent colours on their wings, except for black and white.  The Common Tree Nymph and the Mangrove Tree Nymph are the black and white species that can be found in Singapore. 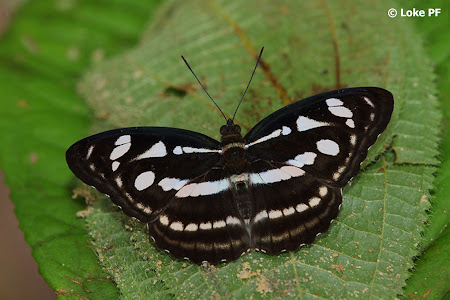 Only the uppersides of the Sailors and Sergeants are typically black and white.  Some of the species have orange, brown or bluish-grey undersides.


Some of the Sergeant and Sailor species of the subfamily Limetidinae are also black and white striped on their upperside of their wings. However, most of them have either orange, brown and bluish gray undersides which would make them black and white candidates only when viewed from their dorsal side. 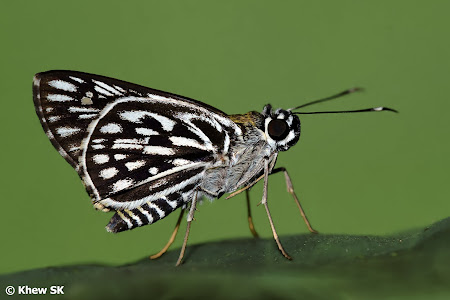 The Chequered Lancer is one of the black and white species amongst the skippers but on the upperside, the wings have orange-brown spots 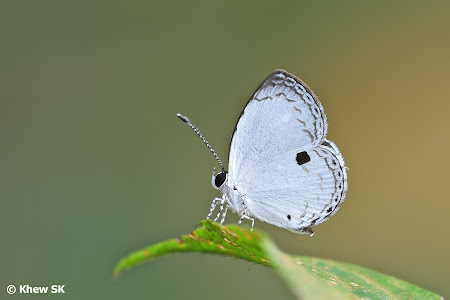 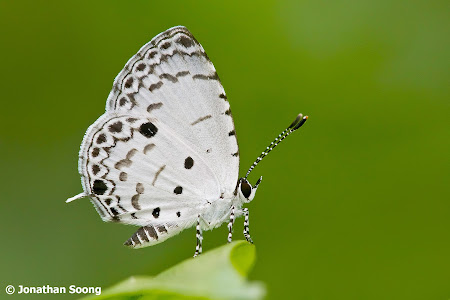 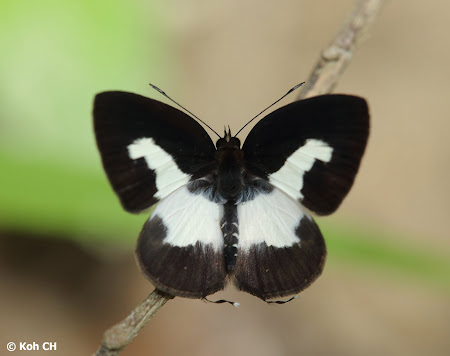 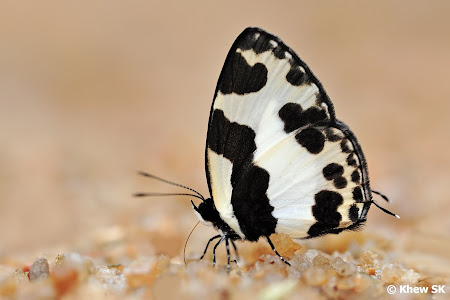 
In the family Lycaenidae, three Singapore-extant species, the Elbowed Pierrot, Malayan and the Quaker can be considered black and white species as both their under and uppersides are predominantly of black and white or grayscale colouration in appearance. 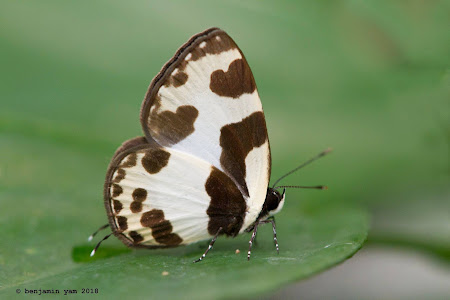 With that short introduction to our black and white species found in Singapore, see if you can spot any more that may come over from neighbouring countries in future. These species are considered the "Zebras" of our butterfly world - just simple black and white like the mammalian namesake from the horse or Equidae family.

Posted by Commander at 8:24 PM 0 comments