Life History of the Malayan Sunbeam 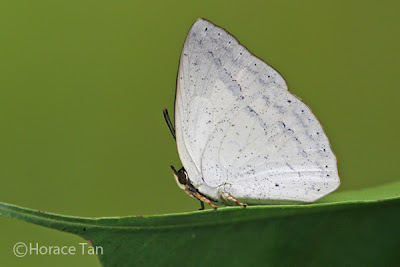 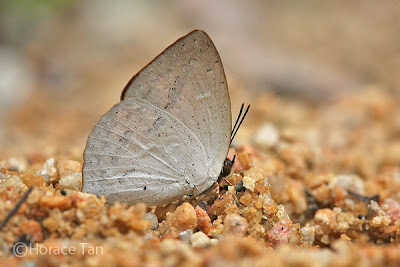 A puddling Malayan Sunbeam found in the nature reserve. 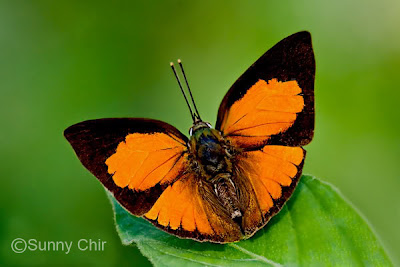 A male Malayan Sunbeam sunbathing with its wings opened.

Physical Description of Adult Butterfly:
Above, the wings are bright orange with black borders. In the male, the black distal border continues to the dorsum in the forewing, and the third of the hindwing near the tornus is darkened. The female is in paler orange than the male and has much broader black borders. On the hindiwng the orange portion in the female only occupies a small crescentic area. Underneath, the wings are silvery white with obscure fasciae. On the forewing, the post-discal band runs from the costa near the apex towards the dorsum in an oblique manner. The post-discal striae are shaded inwardly with grey patches. Legs are banded in reddish orange. 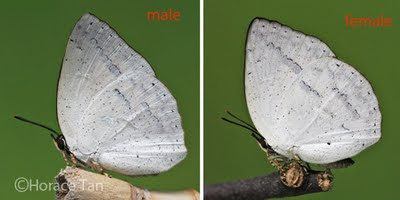 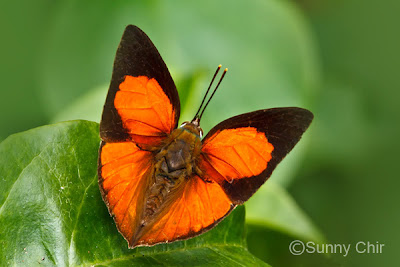 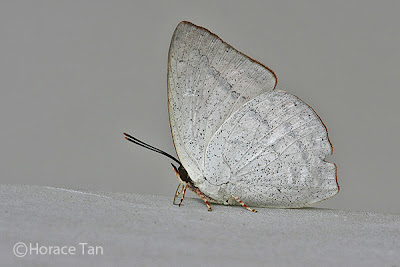 Field Observations of Butterfly Behaviour:
This species is uncommon in Singapore. Individuals are typically encountered in the Central Catchment Area, Bukit Timah nature reserve, Southern Ridges, Singapore Botanical Gardens and on Sentosa Island. Adults can be occasionally sighted in these areas where they have been observed to engage in sunbathing, puddling, and ovipositing activities. 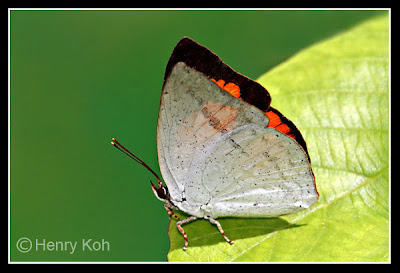 A sunbathing male Malayan Sunbeam giving us a glimpse of its upperside. 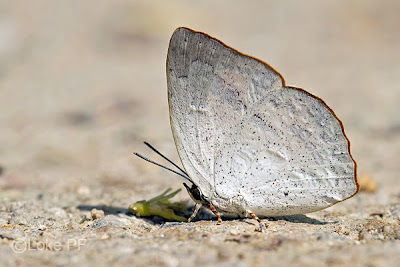 Early Stages:
The two currently known local host plants, Callerya atropurpurea and Pongamia pinnata, belong to the Leguminosae family. The first of the two is a newly recorded host while the second is previously recorded by Col. C.T. Bingham in early 1900s in Mergui (C&P4). In Singapore, both plants can be found growing in the wild as well as being cultivated as wayside trees. The caterpillars of the Malayan Sunbeam feed on the young foliage of these host plants. 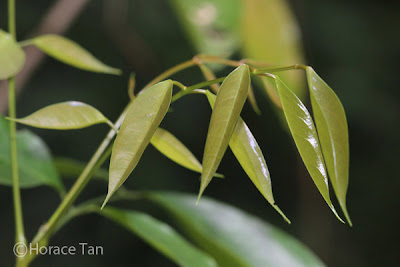 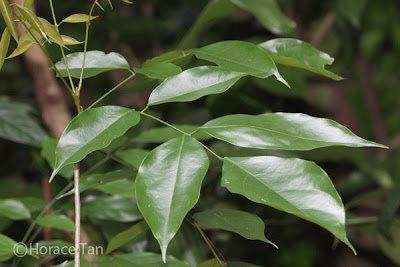 Eggs are laid singly on young shoots of the host plant. At times several eggs can be found on one single young shoot. Each egg resembles a flattened bun with coarse hexagonal reticulations. It is initially pale greenish when newly laid but turns whitish as it matures. Each egg has a basal diameter of about 1mm. 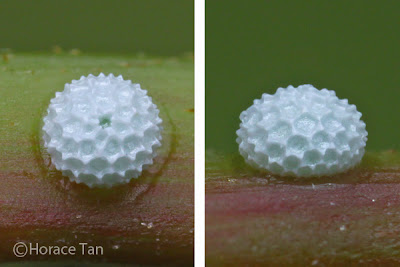 Two views of an egg of the Malayan Sunbeam, diameter: 1mm.

It takes about 2.5 days for the egg to hatch. The young caterpillar consumes the upper portion of the egg shell to emerge. The remaining egg shell is left alone as the newly hatched proceeds to check out the immediate surrounding and nibble on leaf lamina for its first meal. With a length of 1.5mm, it has numerous fine setae on its body surface, with those occurring dorso-laterally and laterally particularly long. 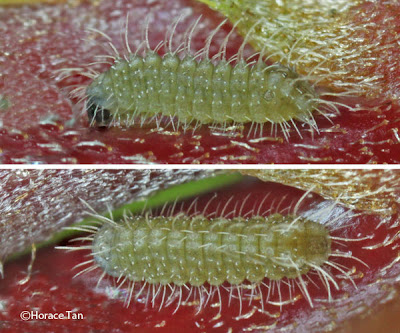 Two views of a newly hatched caterpillar after a few nibbles, length: 1.8mm.

The caterpillar is initially yellowish green but turns dark yellowish or reddish brown as it develops in this instar. The first instar lasts about 2-2.5 days and its body length reaching about 3mm. 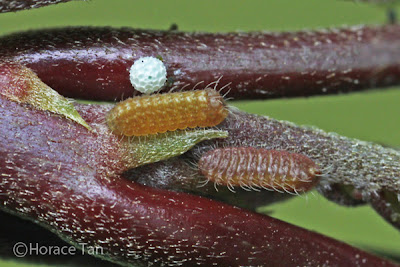 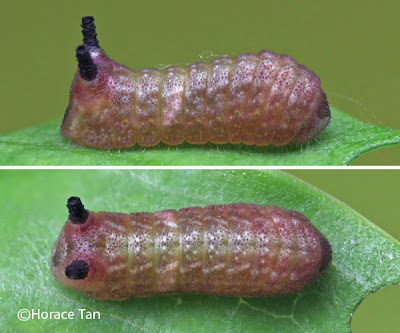 Two views of a 1st instar caterpillar, dormant prior to its moult, length: 3mm.

The body of the 2nd instar caterpillar is covered with many short setae. Its body colour is dark yellowish to reddish brown, with variations existing between individual specimens. On each body segment, there are several oblique pale stripes laterally. A prominent change occurs on the 8th abdominal segment where a pair of long cylindrical and erect processes, black to dark brown in colour, is now present. When the caterpillar is disturbed or stressed, tentacles with tuffs of white and black hairs at their apices, are everted from these procesess and whirled around at great speed. This instar lasts for about 1.5-2 days and reaches a length of about 6.0mm. 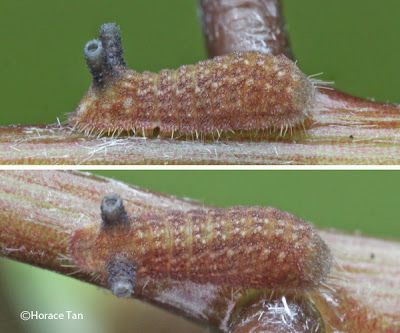 Two views of a 2nd instar caterpillar, early in this stage, length: 3mm. 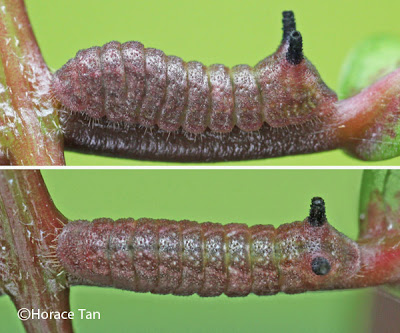 The 3rd instar caterpillar looks similar to the 2nd instar caterpillar but has a pair of white, quadrate lateral patches on the 5th abdominal segment. White lateral stripes, varying in lengths but lesser in prominence than that on the 5th abdominal segment, appear later and becoming more prominent on the body segments. The body color varies from red to reddish brown, yellowish brown and greenish brown in different individuals. The caterpillar grows up to 11mm in this instar which lasts about 2-3.0 days. 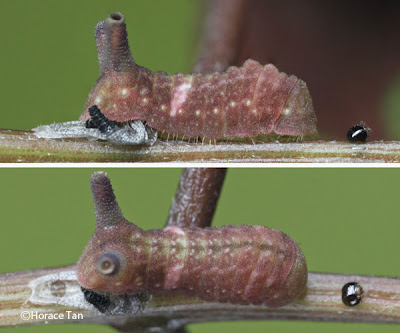 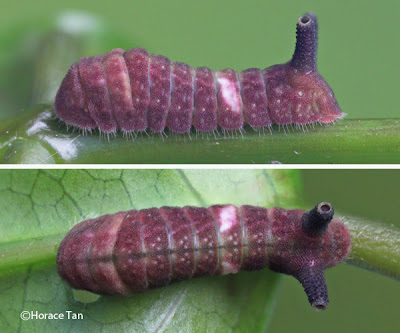 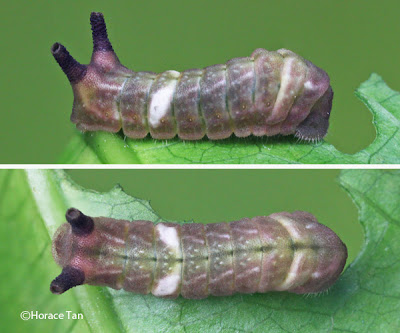 The 4th (and final) instar caterpillar resembles the 3rd instar caterpillar but with a more prominent contrast of white stripes/patches against the base colour of yellowish green to purplish/pinkish green. The dorsum of the body segments of the 2nd and 3rd thoracic segments are pale green/pink to whitish in coloration. The dorso-lateral oblique white stripes on the 1st two abdominal segments are joined or nearly joined while those on other segments are well separated. 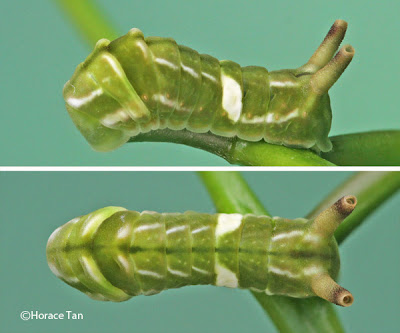 Two views of a 'green-form', 4th instar caterpillar, earlier on in this stage, length: 13.5mm 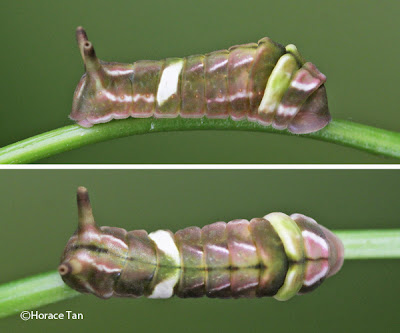 The 4th (and final) instar lasts about 4 days and the body reaches up to a length of about 20mm. In the last day of this stage, the caterpillar ceases feeding, and its body shrinks in length. The entire body decolorises to a dark shade of jade green. 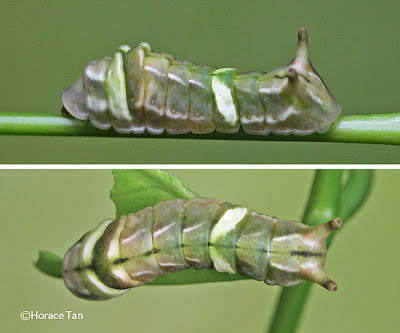 A Malayan Sunbeam caterpillar reacts with the eversion of its tentacular organ when an intruding caterpillar gets too close for comfort.
Eventually, the late 4th instar caterpillar comes to rest on a spot on the surface (typically the upperside) of leaf. Here the caterpillar prepares for pupation by spinning a silk pad and a silk girdle to secure itself. It then becomes immobile in this pre-pupatory state for about 1 day. 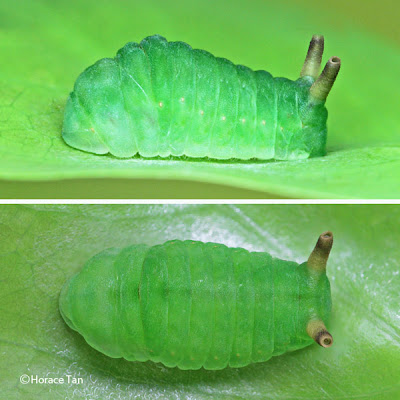 Two views of a pre-pupa of the Malayan Sunbeam

The next day the pupation takes place. The pupa is held via its cremaster and a silk girdle to the silk pad on the substrate. It is almost hemispherical in shape and has a flat under surface. It is entirely jade green but with a fair number of white speckles dotting the pupal surface. There is a rather large spade-shaped whitish marking on the dorsum. In some specimens, this white marking is adorned with several yellowish brown dots. Length: 10-13mm.
The pupation event of a Malayan Sunbeam caterpillar. 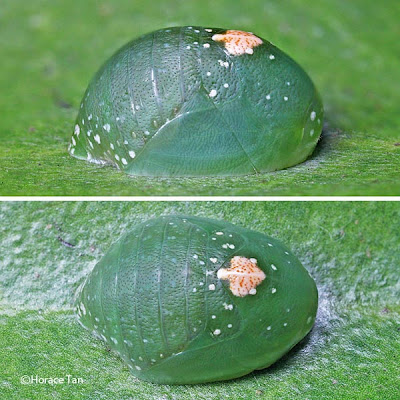 Two views of a pupa of the Malayan Sunbeam. 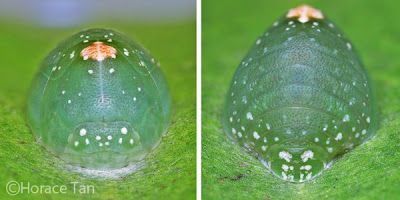 Front view (left) and rear view (right) of a pupa of the Malayan Sunbeam.

Seven days later, the pupa becomes darkened in color signaling the imminent emergence of the adult. The orange patch on the forewing upperside can now be seen through the pupal skin in the wing case. The next day the adult butterfly emerges from the mature pupa. 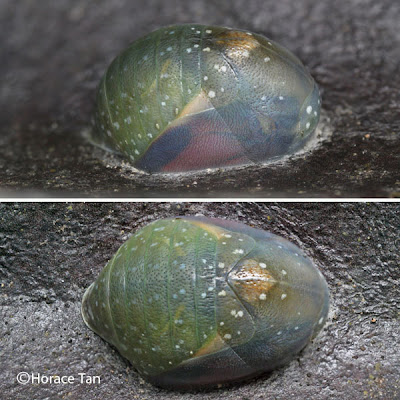 Two views of a mature pupa of the Malayan Sunbeam. 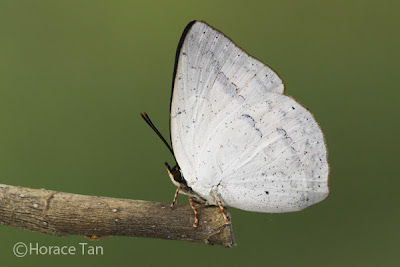