BUTTERFLY OF THE MONTH - AUGUST 2008
The Courtesan (Euripus nyctelius euploeoides) 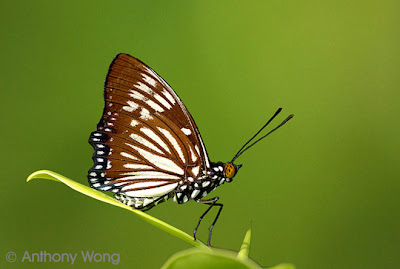 The Courtesan belongs to the family Nymphalidae, subfamily Apaturinae, of which there are only two species found in Singapore - the other one being the Purple Duke (Eulaceura osteria kumana). The Courtesan is relatively rare, and rather local in appearance. Males of the species are often encountered regularly at an urban park in Singapore. It has been occasionally seen even in the Singapore Botanic Gardens, at Upper Peirce Reservoir Park, and at various locations in the forest reserves. My earliest confirmed record of this species was a female at the fringes of Mandai Orchid Gardens in early 1997. 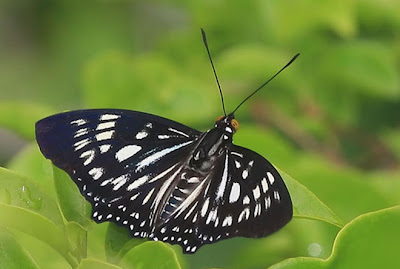 In the male of the Courtesan, the forewing is deep bluish black, with cellular, discal, post-discal and submarginal series of white spots. The hindwing is white, with the veins heavily blackened. In living specimens, the eyes are yellow in both sexes. The males are territorial, and tend to return to the same favourite perch time and again, even after being disturbed. It has a strong powerful flight, but when not disturbed, adopts a leisurely gliding flight as it rides on thermal uplifts. If there are intruders into its territory, it gives chase and tries to scare them away. 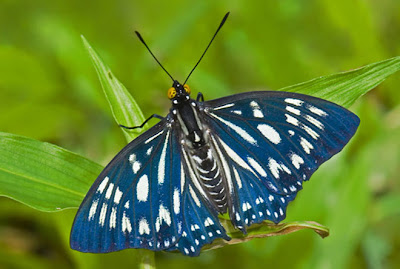 The Courtesan exhibits a striking example of sexual dimorphism. Two female forms are known in Malaysia and Singapore. In the female-form isina the butterfly mimics the male of the Magpie Crow (Euploea radamanthus radamanthus). The wings are a deep bluish black with a white post-cellular patch on the forewing and the inner area of the hindwing broadly whitened. 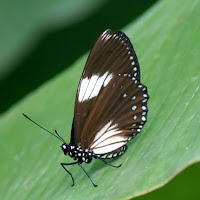 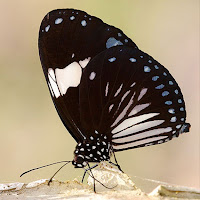 The 2nd female form, euploeoides of the Courtesan mimics the female of the Magpie Crow, where the wings are bluish brown with the hindwing predominantly white. Females, when seen, are often observed flying around bushes and flowering plants in a slow unhurried manner, mimicking the flight of the Magpie Crow, a Danainae species which is distasteful to predators. 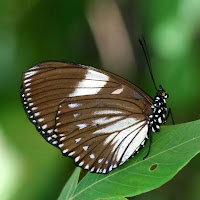 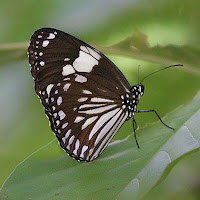 Courtesan female-form euploeoides (left) mimics the female Magpie Crow (right)
The Courtesan is also unique in that it is one of the few species where the sexes differ quite significantly in size, where the males are not more than two-thirds the size of the females. Males are more often observed than females, which are much rarer.
The species' normal distribution has been recorded from Northern India through South East Asia to the Philippines.
The known host plant on which the species has been bred in Singapore is Trema tomentosa.