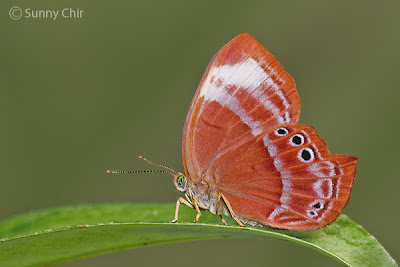 Physical Description of Adult Butterfly:
Above, the male is deep crimson brown and entirely unmarked; the female is much paler and has a diffuse white subapical patch on the forewing, and black submarginal spots in spaces 1b, 4 and 5 on the hindwing. Underneath, for both sexes, the underside is paler, and each wing has a pair of diffuse, pale-purplish, post-discal bands. The outer band on the hindwing has a series of black, white-edged, submarginal spots in spaces 1b, 4, 5 and 6, that in space 1b being double. The female has broader and paler transverse lines than the male. In both sexes the hindwing is prominently angled at vein 4. 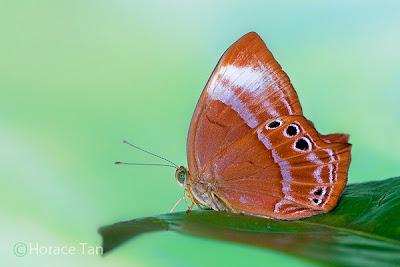 A female Malayan Plum Judy perching on a leaf. 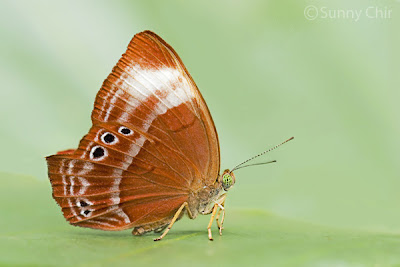 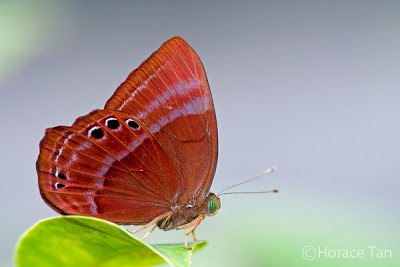 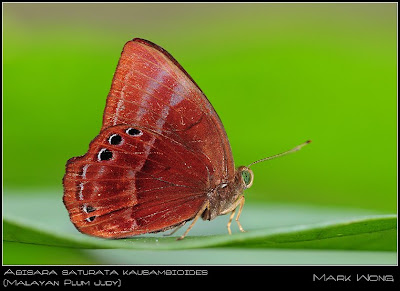 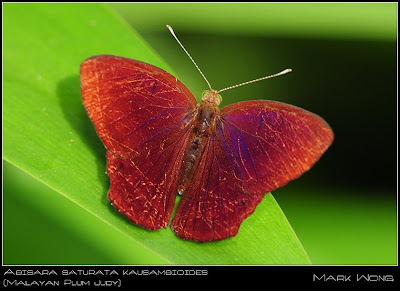 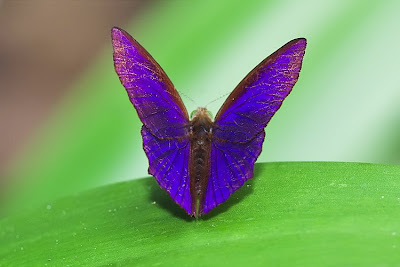 Left: A male Malayan Plum Judy opening its wings to sunbathe.
Right: Another male with half-open wings, the angle at which light reflected gives the
lustrous blue appearance

Field Observations of Butterfly Behaviour:
The adults are often seen perching on leaves with half open wings, turning and hopping from one perch to the next. They only take flights on bright sunny days. This species was only sighted in the Island of Pulau Tekong before the turn of the century. In recent years, it has appeared in numbers on the main Singapore island where its host plant, Ardisia elliptica, are thriving. It is now considered a resident species in the Southern Ridges where both of its recorded local host plants, A. elliptica and E. ribes, can be found.

Early Stages:
The host plant, A. elliptica, is a large shrub or small tree. The leaves are simple, alternate, grandulate, obovate and leathery, 8-12 cm long and have nearly invisible nerves. The pink flowers occur 6 to 8 in an umbel. In the wild, the plant grows in tidal swamps and muddy river banks. In urban settings, this plant has been commonly cultivated as hedges. The other host plant, Embelia dasythyrsa, is a woody climber with simple, alternate and lanceolate leaves. This plant is found along trails in the Central Catchment Nature Reserves and the Southern Ridges. The immature stages of the Malayan Plum Judy feed on the relatively young leaves of the host plant, typically on the underside. The first instar caterpillars graze on the leaf surface, and the later instars nibble along the leaf edges. Between feeds, the caterpillars of all instars rests on the leaf underside. 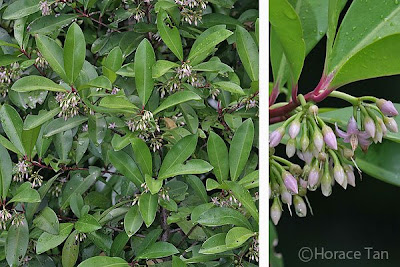 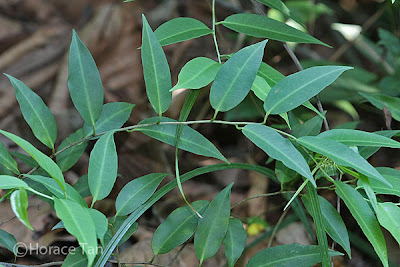 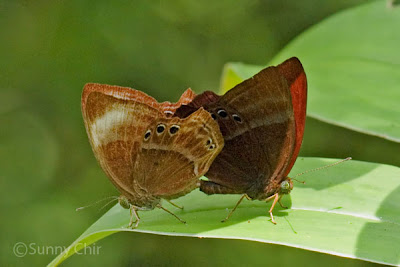 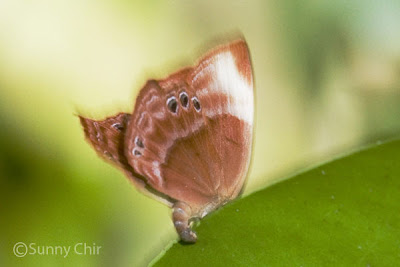 Left: A mating pair of Malayan Plum Judy; Right: a female Malayan Plum Judy ovipositing
Each egg is laid singly on the underside of a leaf on the host plant, typically close to the leaf edge. Each egg is pale translucent green, somewhat conical in shape with a base diameter of about 0.7mm. The surface is smooth and has a mid-level belt of fine hairs encircling the egg. 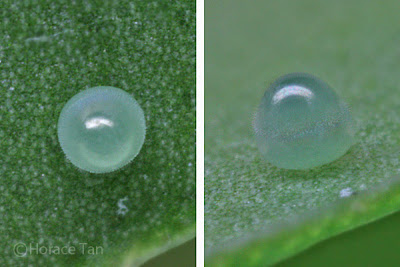 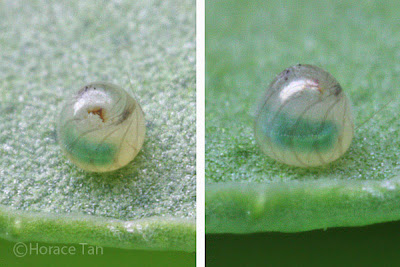 Two views of a mature egg of the Malayan Plum Judy.
Both the mandible and setae are visible through the egg shell.

A time-lapse hatching sequence of a Malayan Plum Judy caterpillar.
The caterpillar nibbles away at the egg shell in clockwise manner
until the hole is large enough for its exit. 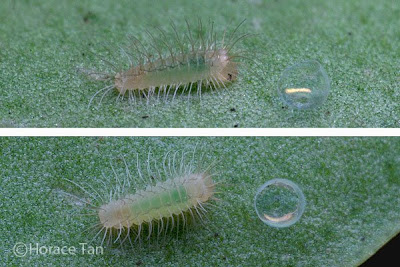 Two views of a newly hatched caterpillar, pausing before it goes on to finish the egg shell.

It takes about 4 days for the egg to hatch. The young caterpillar consumes part of the egg shell to emerge. With a length of about 1.9-2.0mm, it has a pale greenish and cylindrical body with long setae dorso-laterally (dark) and sub-spiracularly (white). The body color changes to a brighter shade of yellow with a green undertone as it feeds and grows. 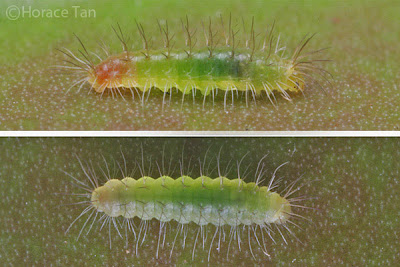 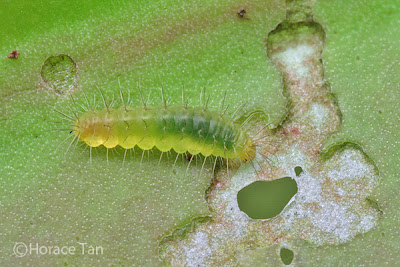 An 1st instar caterpillar showing us the result of its grazing work.

The first instar lasts for 2 days and the body length reaches about 3mm. Prior to the moult to 2nd instar, the body shortens and takes on a pumped up appearance. This shortening routine also occurs prior to each of the subsequent moults. 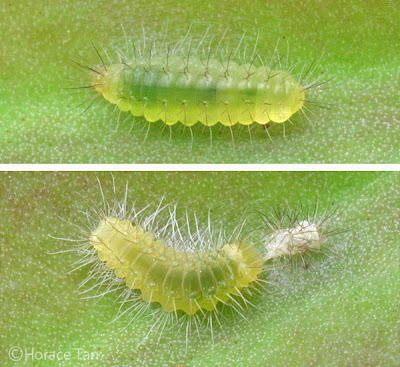 The body color of the 2nd instar caterpillar is yellow with a greenish undertone. Overall, the appearance is little changed from the 1st instar. This instar lasts for 3 days and the caterpillar grows to a length of about 6mm before the moult to the 3rd instar. 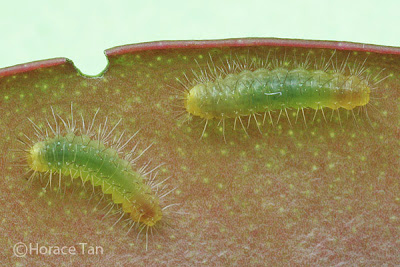 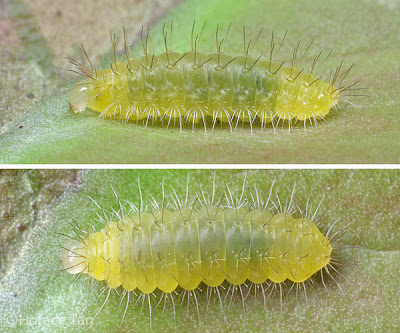 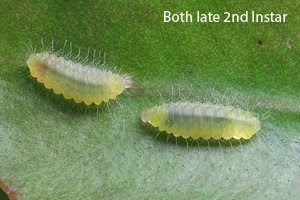 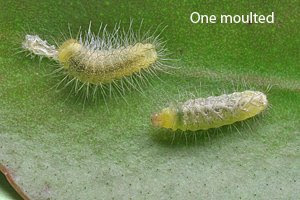 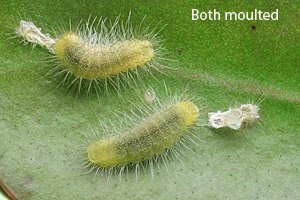 A sequence showing the moult to the 3rd instar for two Malayan Plum Judy caterpillars.
The third picture gives the time-lapse sequence for one of them.
The 3rd instar caterpillar is yellowish green with a much greater emphasis in green. The body surface is marked with numerous tiny whitish/pale-greenish markings. As the caterpillar grows rapidly in this instar, small dark spots appear dorsally between body segments. Laterally, similar spots also appear, one to each segment. After 3 days in this stage with the body length reaching a maximum of about 12mm, the next moult brings the caterpillar to its 4th and final instar. 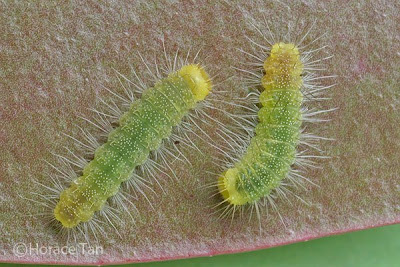 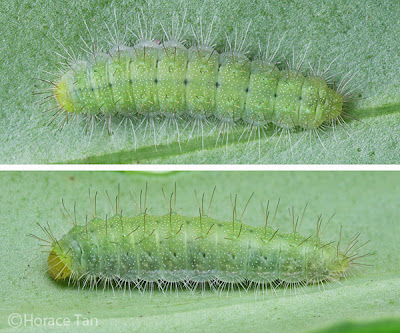 Two views of a 3rd instar caterpillar, late in this stage, length: 12mm

A 3rd instar caterpillar, very late in this stage, prior to its moult, length: 10.5mm

The 4th instar caterpillar resembles the 3rd instar caterpillar but with a much denser set of sub-spiracular setae. The body is mainly green in color. The head, which is colored yellow in the first three instars, is now green/yellowish-green. 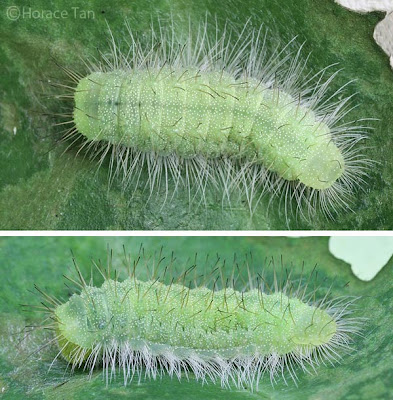 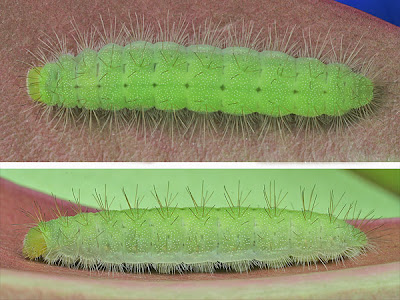 Two views of a a 4th instar caterpillar, length: 20mm.

The 4th instar lasts for 4 days and the body grows up to a length of about 23-24mm. On the last day of this instar, the caterpillar ceases food intake and its body shrinks in length. It then finds a spot on the leaf underside where it spins a silk pad and a silk girdle to secure itself for the upcoming pupation event. 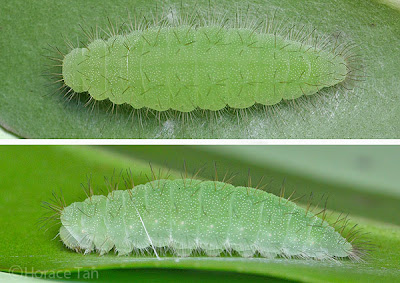 After one day of the pre-pupal phase, pupation takes place. The light-green pupa has a diamond-shaped outline, being broad at mid-body and pointed at two ends. The body has two prominent black dorsal spots on the leading abdominal segment and a number of pale green spots, four to each segment, on the remaining segments. Laterally, there are some hairs running along the fringe of the body. Each pupa is 13-14mm in length. 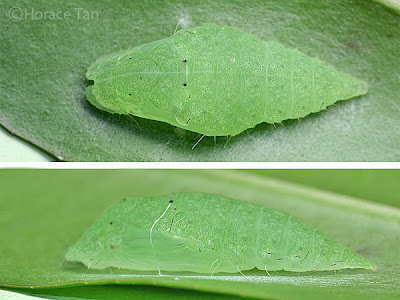 Two views of a fresh pupa of the Malayan Plum Judy

Six days later, the pupa becomes darkened in color signaling the imminent emergence of the adult. The next day the adult butterfly emerges from the mature pupa. 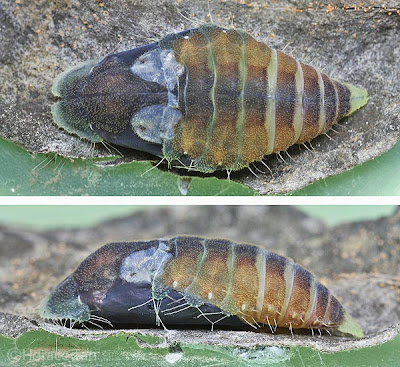 Two views of the mature pupa of a male Malayan Plum Judy. 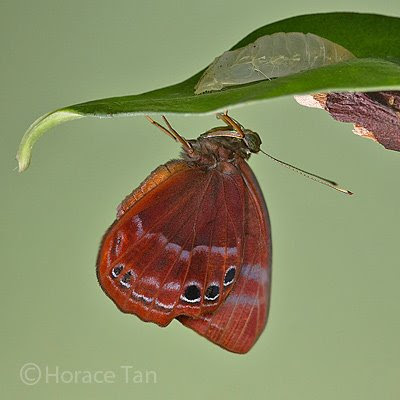