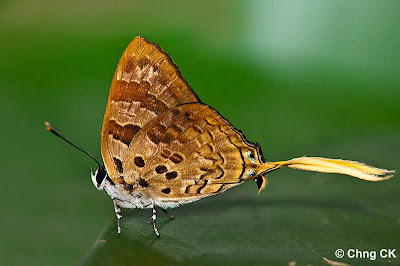 It was a cloudy Sunday morning when Anthony, Mark and I arrived at our favourite hunting ground within the Central Catchment Area. Today, I had only one objective on my mind - to shoot The Plane. I settled immediately around the area the Plane had been spotted in recent weeks. After a while, I received several SMSes from Mark, reporting that he had seen some rare species along another nearby trail. I was quite tempted to join him but told Anthony to proceed first. This turned out to be the right decision.
Left alone, I went slightly off-trail into an area that was heavily shaded by the thick forest canopy. Scanning around like a predator hunting for its prey, it was when I looked through the gaps of some leaves that I saw a brown butterfly perched at eye level about 2 feet away. I took a second look to check out its wing pattern and the long tail. To my delight, The Plane had landed right in front of me !
The first thing that went through my mind was to take a record shot. A few branches and leaves in front were blocking the lens, so I used the lens hood to carefully find an opening for an unblocked view. With the record shots safely in the bag, I decided to take my chances by moving the obstructing branches and leaves away carefully, knowing from experience that the they might be “connected” to the leaf on which the Plane was resting. Carefully, I managed to move the obstructions away without frightening the butterfly off. This allowed me to go a step forward for a near full frame shot.
My initial shots looked fine, except that the background was messy and dark. I switched to manual mode, pumped up the ISO and opened up the aperture. I lowered myself a little to be more parallel to the wings this time, steadied my feet again while tightening my grip firmly on the 5D MkII before squeezing off another 4 more shots.
Although this shot wasn’t up to the usual ButterflyCircle photography standards, it was an unforgettable one for me. After all, I have finally shot my avatar.
ButterflyCircle Photographer : Chng CK in his 40's who works in the aviation industry.
Posted by Commander at 10:05 PM 3 comments