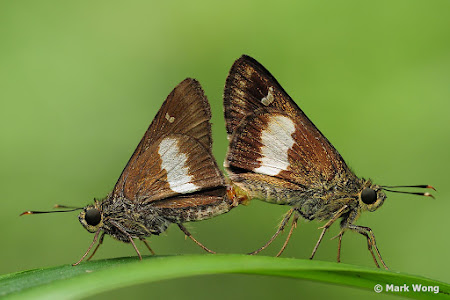 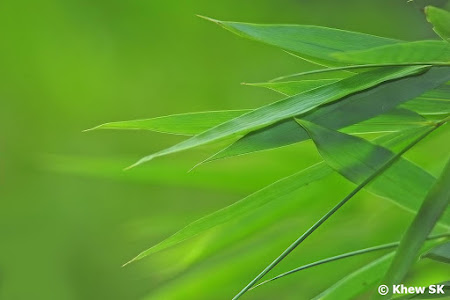 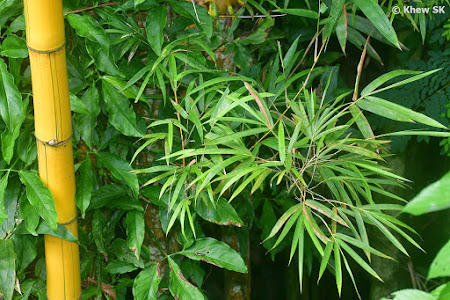 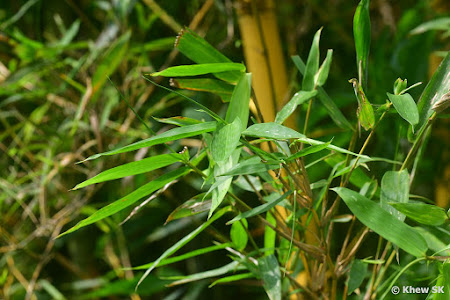 
There are many species of bamboos in southeast-asian forests, and some have been cultivated as feature plants in the landscaping of parks and gardens. Hence bamboos also contribute to the biodiversity of butterflies as these butterfly species' sustainable populations are dependent on the presence of these bamboos. 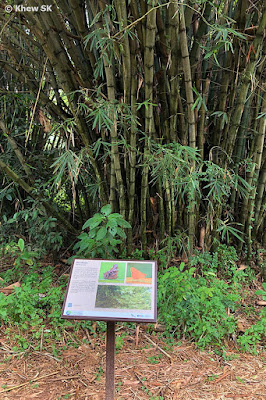 
We now take a look at another series of examples of butterflies whose caterpillars feed on bamboos as their host plants. These species are from the Hesperiinae (Skippers) subfamily.
5) Linna Palm Dart (Telicota linna) 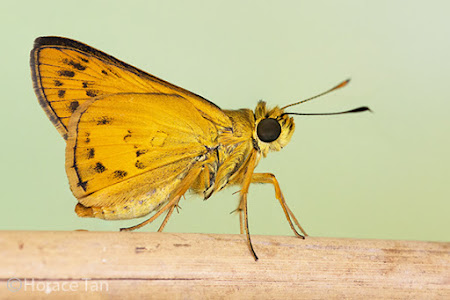 Amongst the 'Palm Darts' found in Singapore, the Linna Palm Dart is the only species of the six Palm Darts whose caterpillar feeds on bamboo. Bred successfully on Bambusa multiplex (Hedge Bamboo), the Linna Palm Dart can be found in urban parks and gardens, and sometimes at the fringes of the forests in Singapore. It is considered moderately rare, but is widespread in distribution across the island. 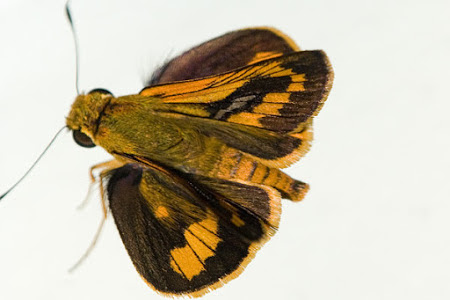 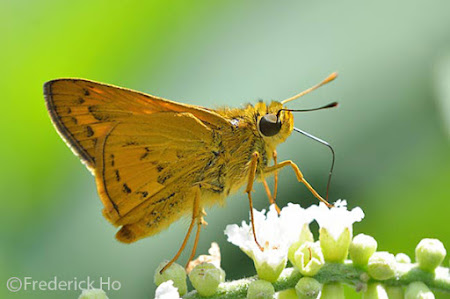 The Linna Palm Dart is one of several cryptic species that resembles its close cousins with black and orange markings in the Telicota and Cephrenes genera. The diagnostic features that separate the Linna Palm Dart from the others are that the base in space 3 of the forewing is black, and the veins across the orange post-discal patch on the underside of the hindwing are not dark dusted. 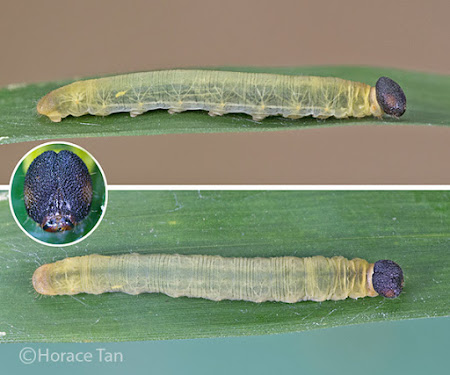 A black-headed morph of the Linna Palm Dart's caterpillar 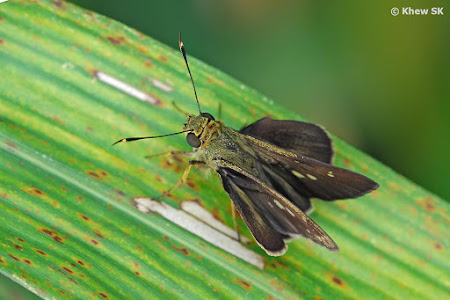 The Dark Banded Ace is a forest-dependent species that is considered rare in Singapore. Its occurrence is rather local, where the butterfly is often observed in the vicinity of its caterpillar host plant, Bambusa vulgaris. It is a skittish butterfly but is often seen feeding on bird droppings and other animal excretions. 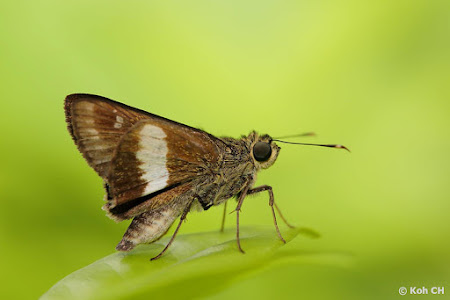 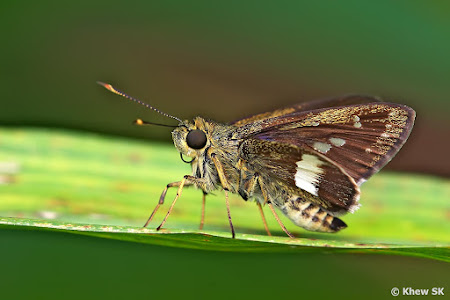 The Dark Banded Ace is dark brown above, with a series of discal and post-discal yellow spots on the forewing. The basal area of the forewing is speckled with golden yellow. The underside is similarly dark brown, with golden speckles on the forewing margins and bases of both wings. There is a distinct white band on the underside of the hindwing which is outwardly jagged. The antennae are yellow-tipped just below the apiculus. 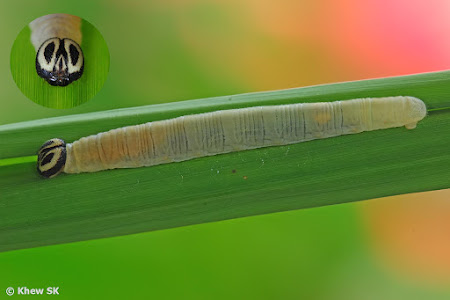 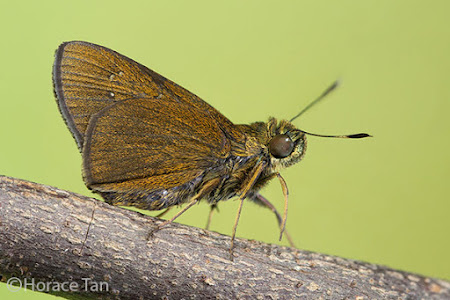 The Malayan Swift was a recent addition to the Singapore Checklist after its life history was recorded and validated that the species identification was correct. The species frequents the same habitats as its closely related cousins like the Full Stop Swift and the Philippines Swift. Being a cryptic species with many lookalikes, it is difficult to identify the species in the field. 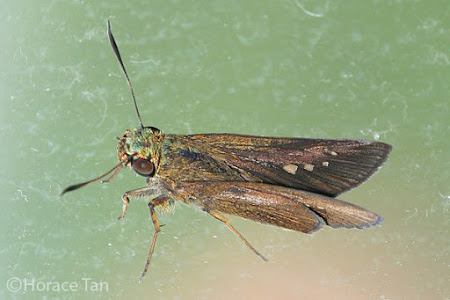 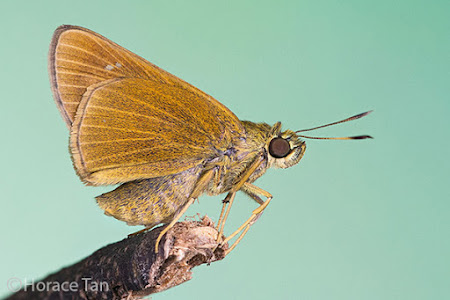 The Malayan Swift can be separated from its other lookalike cousins in the genus Caltoris in that it has no cell spots on the upperside of the forewing. On the upperside, the wings are dark brown with hyaline spots in spaces 2,3 and 4, subapical spots in spaces 6 and 7 and no cell spots in the forewing. Compared to the other Caltoris sp., the male is almost always missing a spot in space 1b. On the underside, the wings are dark ferruginous in the male, and ochreous in the female. 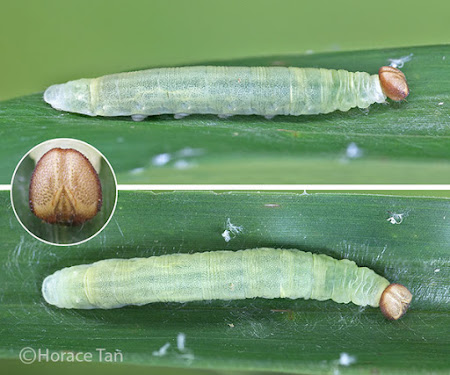 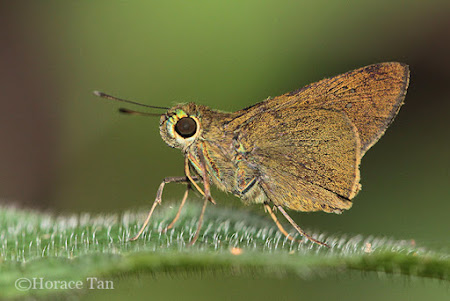 Another species of the Caltoris genus, the Philippine Swift is rare and frequents shaded forested areas in the nature reserves. Due to the very similar markings with other species in the genus, it is extremely challenging to distinguish one species from the other in the field, without the ability to see the upperside of the butterfly. 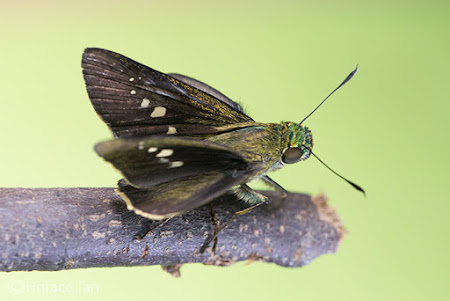 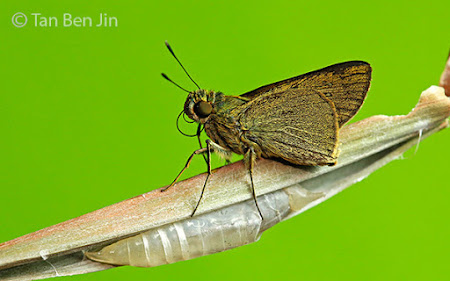 The Philippine Swift is dark brown above and lacks any forewing cell spots but features the usual post-discal spots. The male has a pale yellow spot in the lower half of space 1b on the upperside of the forewing. The underside is ferruginous but appears to have a more greenish sheen that the allied species in the group. The forewing is distinctly excavate at vein 2. 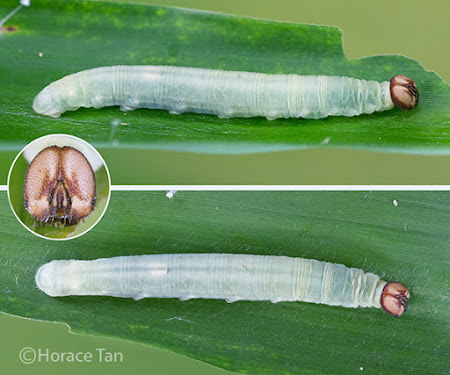 The late instar caterpillar looks very similar to the caterpillar of the Malayan Swift, but the head capsule has darker and more distinct markings. It has been successfully bred on two bamboo species - Common Bamboo (Bambusa vulgaris) and Malay Dwarf Bamboo (Bambusa heterostachya). 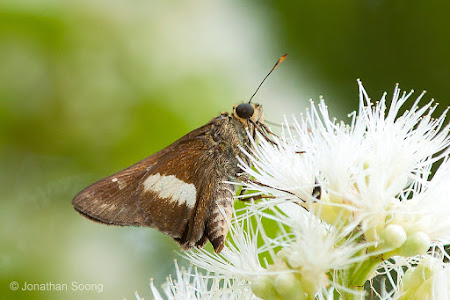 It is highly likely that there are other species that have yet to be discovered whose caterpillars feed on bamboos. It is a matter of time that one or two surprising cryptic species may turn up if the life histories are discovered and recorded. Already, there is likely to be another species of Caltoris that is new to the Singapore checklist and had eluded discovery until recently when its caterpillar was discovered on bamboo. That will be another post for another time.