Butterfly of the Month - February 2019 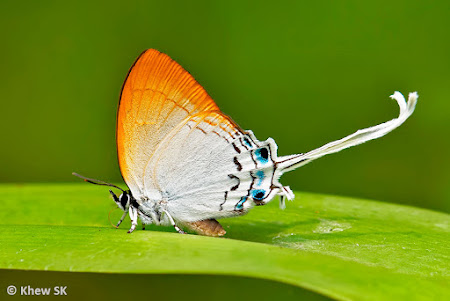 Chinese communities all over the world welcomed the Year of the Pig on 5 Feb 2019. The pig is the the twelfth animal in the 12-year cycle of Chinese zodiac sign and 2019 completes the cycle that started in 2006. This year's pig is the "Earth" pig according to the Chinese almanacs. 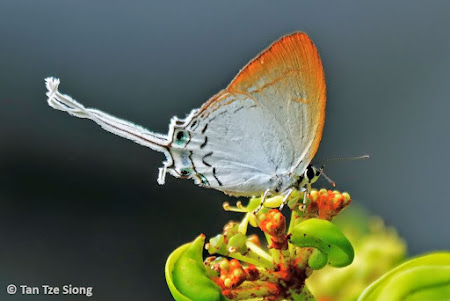 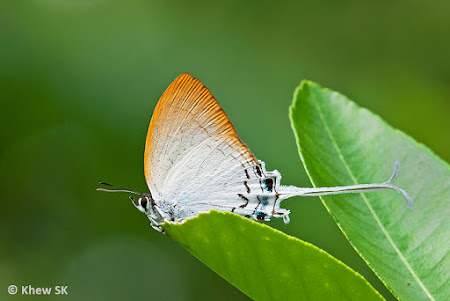 According to the Chinese astrology , 2019 is a great year to make money, and a good year to invest! 2019 is going to be full of joy, a year of friendship and love for all the zodiac signs; an auspicious year because the Pig attracts success in all the spheres of life. Sounds generally good enough for me! :) 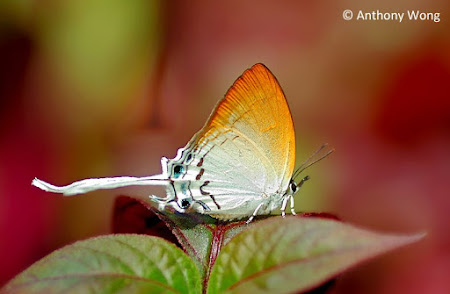 It is always a nice feeling to shed the old and bring in the new, especially when 2018 wasn't a particularly good year on many fronts. It was heartbreaking when my mom left us at the age of 87 in early January. That month was just a total blur of sadness, grief and pain - combined with a flurry of activities. 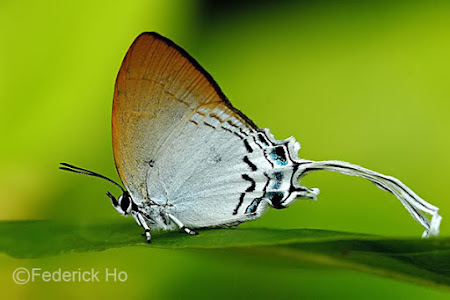 But thankfully, our family support and well-wishes of friends helped us tide over that period. Mom would have wanted us to carry on and be happy that she no longer had to endure the suffering that she had to go through in the last 4 months of her life. To all the relatives and friends who were there for us, I thank you from the bottom of my heart. My apologies if I could not thank each of you individually, but you know who you are, and you have my humble gratitude that you reached out in my family's moments of darkness. 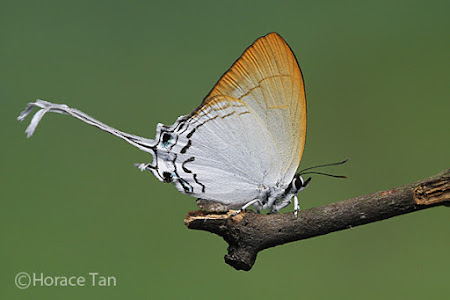 So life goes on for those of us, as we ponder our own mortality, and what we plan to leave behind us in the time that we have left in this world. Whatever little good that we can contribute to the world around us, we should. And we move on to do our little bit to make the world a better place in our own ways. 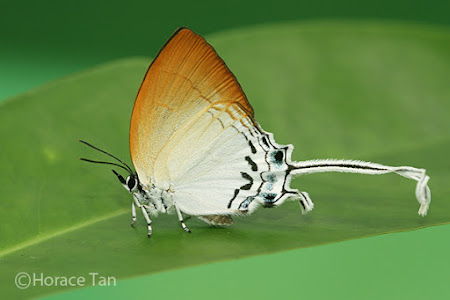 And we continue to bring cheer during this Chinese New Year period and look forward to better times that we have to work hard for. Our world is changing rapidly in many tangible and intangible ways. Disruptions of all sorts and sizes abound, and we have to face new challenges all the time. But that's what makes life 'colourful' and less mundane, even though we struggle to maintain order and stability around us. 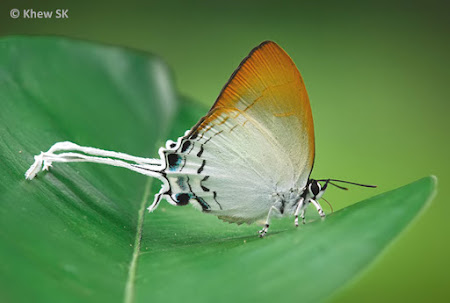 Let us come back to our colourful friends, the butterflies. This month, we feature the Common Imperial (Cheritra freja frigga), a delicate long-tailed beauty of the Lycaenidae family. It is always a breath-taking experience to see this butterfly flutter amongst the shrubbery with its elegant white tails trailing behind. 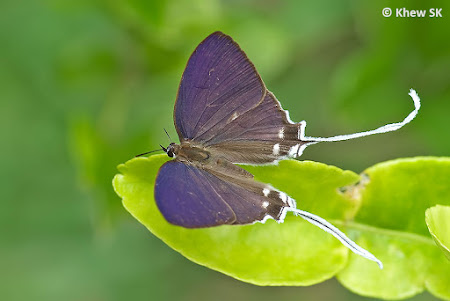 Upperside of a male Common Imperial

The Common Imperial is more often seen in urban parks and gardens than within the forested nature reserves in Singapore. This may be because the species' caterpillars depend on a variety of host plants that are more commonly found in urban areas. The caterpillars of the Common Imperial have been successfully bred on Callerya atropurpurea, Duabanga grandiflora, Adenanthera pavonina (Red Saga) and Cinnamomum iners (Wild Cinnamon). The last two host plants are common roadside trees. 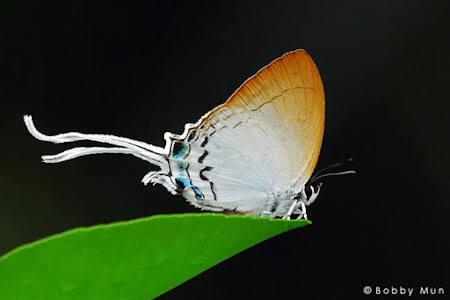 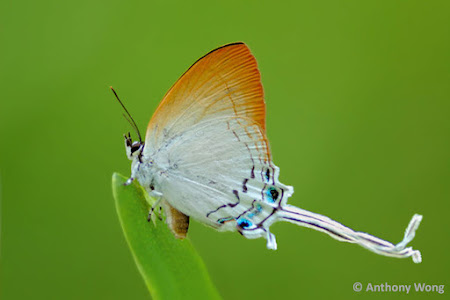 The upper wing surfaces of the butterfly is a deep purple-blue in the male, and dark brown in the female. The tornal area on the upperside features large black quadrate spots. The underside is mainly white on the hindwing with the forewing a shade of orange. The tornal spots on the hindwing is overlaid with iridescent greenish-blue scaling. The Common Imperial has white tails along veins 1a, 2 and 3 of which the one at vein 2 is the longest. 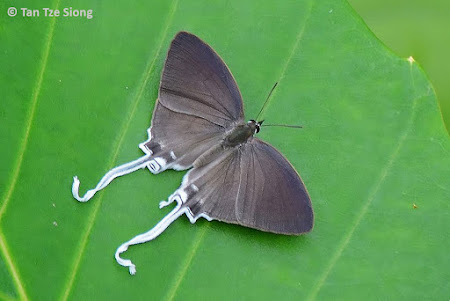 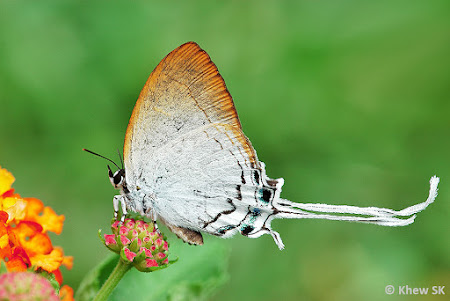 The Common Imperial has a rapid flight and is often skittish, preferring to stay high in the treetops. Where it is found amongst low shrubbery, males have a tendency to perch on a few favourite spots and 'attacks' any intruders into its space. Females descend to the lower levels to oviposit in the mid- to late afternoon hours of the day. 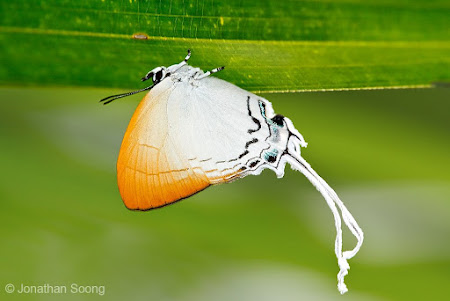 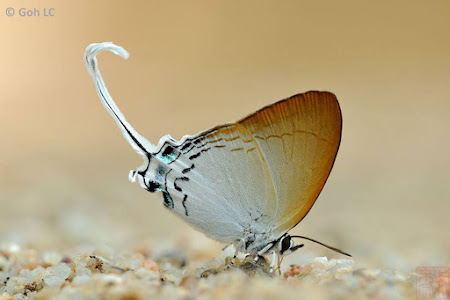 At certain hours on hot humid days, males may be seen opening their wings flat to sunbathe. At other times, it displays a behaviour where it hides under a leaf with its wings folded upright. It is not often seen puddling at damp streambanks or muddy trails, but there have been occasions where males are observed puddling. 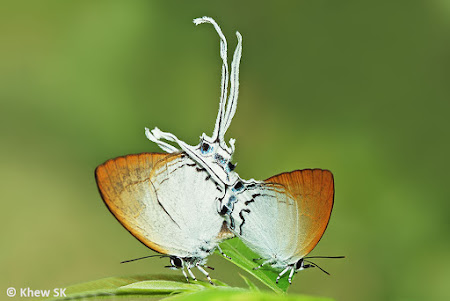 A mating pair of the Common Imperial

Sightings of this species have been more regular and often in the past decade. However, it appears to have become rarer in the recent few years, having been spotted mainly in the parks of Singapore's Southern Ridges. As with many of the English names of butterflies, those that carry the "common" prefix are often not as common as one is led to believe. The Common Imperial is a species that is considered moderately rare to rare, and is usually observed singly.

Posted by Commander at 6:11 PM 0 comments