Butterfly of the Month - November 2017 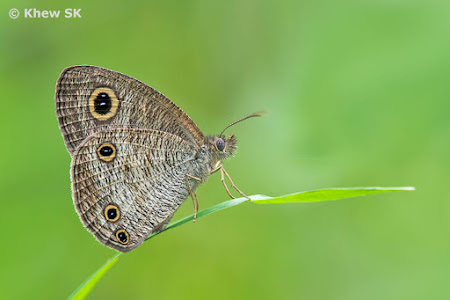 
2017 is chugging steadily into its remaining two months as the end-of-year monsoons hit the region. These days, the volume of rainfall coming down in a short time appears to challenge conventional design in drainage and hydraulic engineering. Coupled with high tides, the statistical probability of flooding in our urban environment is often much higher than predicted. 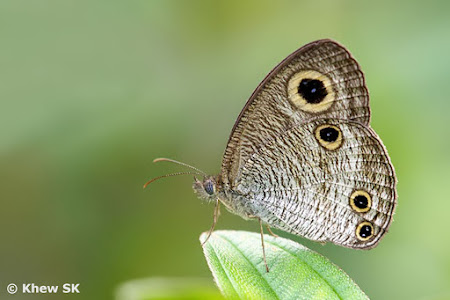 Recently, up north on the island of Penang in Malaysia, an unprecedented flood hit the city of Georgetown after being inundated with heavy rains for several hours. Photos and videos of the floods circulated widely on social media, as the state authorities struggled with evacuation plans and moving residents of low-lying areas to safety. The early Nov flood had a rainfall of 315mm and the highest on record for Penang. Sadly, seven people, mostly senior citizens, fell victim to the floods and the majority of these drowned in the rising waters. 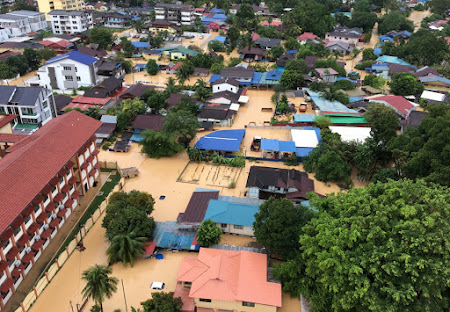 
With the rapid urban development of Penang island, its existing drainage system, both natural and engineered, was unable to cope with the unexpected deluge of rainfall. As residents struggled to get back to their normal life, aerial photos of the Pearl of the Orient showed many areas covered with brown muddy waters and rubbish carried by the floods. Many basement carparks in buildings were completely submerged, extensively damaging any vehicle unfortunate enough to be parked there. The consequences of climate change are here, despite some global leaders' refusal to believe that there are no problems with our environment. 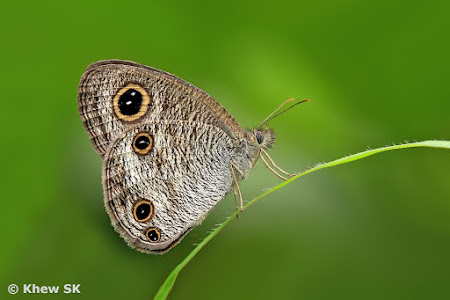 Back in Singapore, the weather has also been unforgiving. Daily rains, whether welcomed or otherwise, was a fact of life over the past month. On one such rainy day, the Mass Rapid Transit (MRT) tunnels flooded for the first time in its history, causing the train network on the N-S line to be shut down for about 20 hours. Social media erupted with criticism at the company responsible for running and maintaining the MRT system. The problem was traced to a failed pump system which was not automatically activated as designed to do. 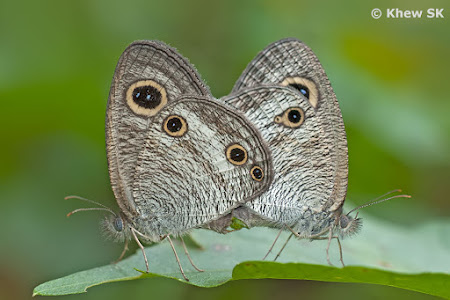 The MRT woes continued with more interruptions by recurring signalling faults and other unforeseen causes that created inconveniences and caused much public ire. Just last week, another of such software faults caused injury to over 30 passengers when a train collided into a stationary train ahead of it. Even though the train was travelling at 16 km/h as reported, several passengers' injuries were severe enough to require hospitalisation. 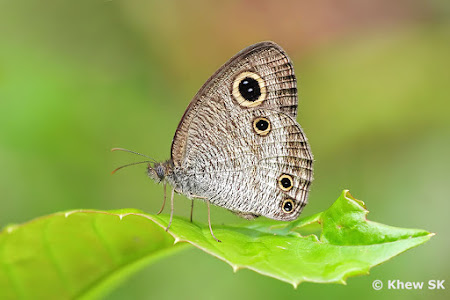 Back to our butterfly world, the rainy season has seen the usual drop in numbers of butterflies. The inclement weather has also reduced the number of outings amongst butterfly watchers, and it's often a gamble (which we sometimes lose!) against the rain gods if we choose to head out to the forests for any butterfly watching activity. 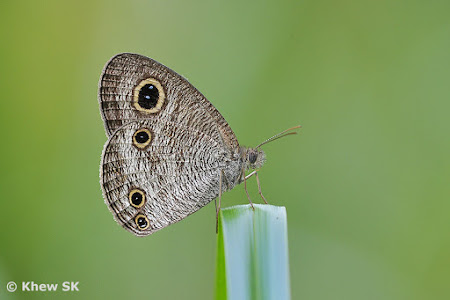 This month, we feature a rather drab and under-appreciated butterfly, the Common Three Ring (Ypthima pandocus corticaria). This species, from the sub-family Satyrinae or often collectively referred to as Browns and Arguses, was once a very common species in Singapore. However, in recent years, the species has become very localised, and not very widespread. This may be due to the fact that its caterpillar host plant, Ischaemum muticum (Poaceae), a 'wild grass' is not as common as in the past.  Or could it be due to habitat changes that are no longer conducive for this species to survive? 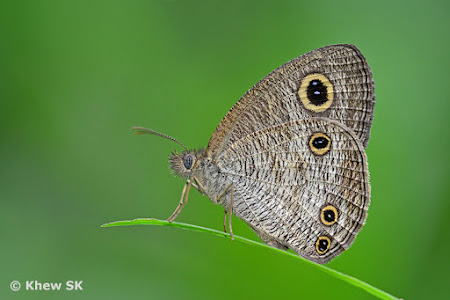 The Common Three Ring is found mainly along the fringes of our nature reserves, where the species' host plant can still be found. Perhaps, as a strategy to support the remaining population of this once-common butterfly could be to allow some areas near the nature reserves to be left wild with Ischaemum muticum, and these areas managed so that this caterpillar host plant is not wiped out by other invasive plant species. There could possibly be alternative host plants that the species' caterpillars may feed on, and such grasses should also be allowed to survive in the wild. 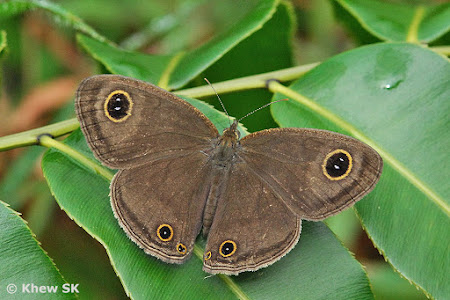 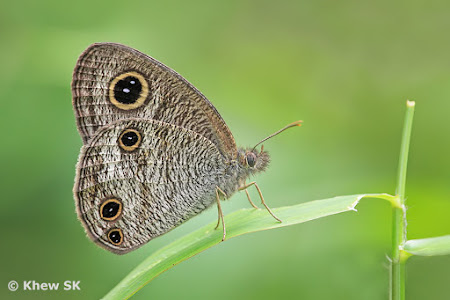 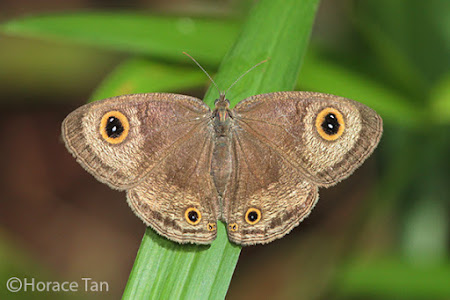 The species of the Ypthima genus have their English common names after the number of ocelli (or eyespots) on the hindwing. The Common Three Ring is the largest of the species found in Singapore. The species has a rather feeble flight and stays close to the ground, amongst low shrubbery and grasses. Where it occurs, it is not unusual to find more than one individual flying in the area. A Common Three Ring puddling at a sandy spot

In the early morning hours when the sun begins to warm up the environment, the Common Three Ring can often be seen with its wings opened almost flat to sunbathe in the warm rays of the sun. At other times of the day, it usually flutters around the low grasses and perch with its wings folded upright. The butterfly is also seen feeding at the ripened fruits of the Straits Rhododendron and wild flowers like the Mile-a-Minute weed. Occasionally, it can be observed puddling at damp sandy ground. 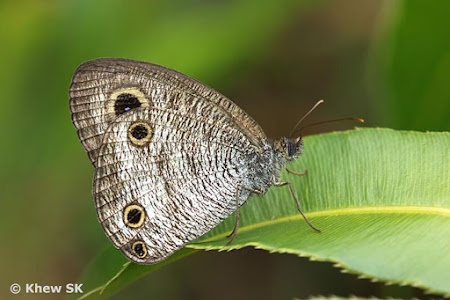 Once known to be as common and widespread as the ubiquitous Common Grass Yellow, the Common Three Ring is fast losing its title as the commonest butterfly species in Singapore. In fact, its other cousins in the genus have taken over the title of being the commonest Ypthima in Singapore. Careful observations should record the remaining colonies in the nature reserves and then some management plan carried out to ensure the survival of this once-common species. 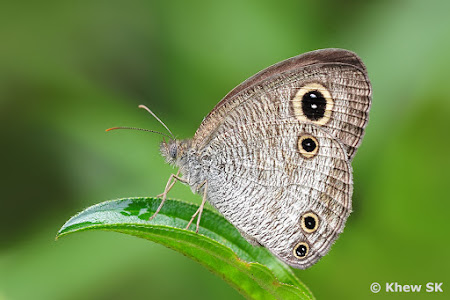 A Common Three Ring perched on the leaf of Melastoma malabathricum

Despite not being an iconic or attractive butterfly species, the Common Three Ring is still very much a part of Singapore's extant biodiversity and should continue to be a species that can be found here. For a 'low profile' species, its caterpillar life history of over a month from egg to adult is considered long. Any disruption to its process of reaching adulthood may render this species into the 'rare' status in future.

Posted by Commander at 1:21 PM 0 comments