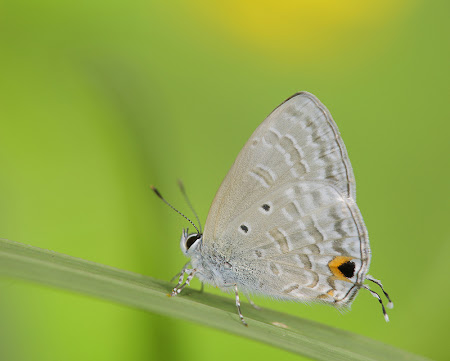 This Lycaenid was considered "extinct" in Singapore by the early authors, classifying it as 'not seen since the late 19th century. However, it was re-discovered in the late 90's during the NParks biodiversity surveys, and small colonies of the Silver Forget-Me-Not turned up in various locations, more regularly near mangrove and back-mangrove areas. The physical appearance of the butterfly is unremarkable, and quite typical of a small Lycaenid of which there are many lookalikes. The underside is greyish white featuring streaks and spots. There is an orange crowned black tornal spot and a pair of white-tipped filamentous tails.
The upperside is a pale silvery blue, mostly unmarked except for a black tornal spot on the hindwing in the male. Females are more heavily marked above with a broad dark grey apical borders and dull-blue wing bases. This shot, taken by ButterflyCircle member Koh Cher Hern at Pulau Ubin last weekend, shows a resting Silver Forget-Me-Not on a blade of grass.
Posted by Commander at 12:19 PM 0 comments