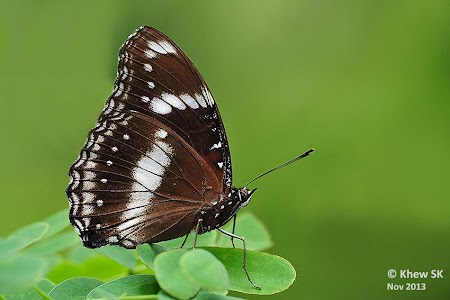 This "Eggfly" occurs as two different subspecies in Singapore - Hypolimnas bolina bolina (known as the Great Eggfly), and Hypolimnas bolina jacintha (known as the Jacintha Eggfly). Whilst the females of the two subspecies are relatively easier to distinguish, the males are almost indistinguishable and look very similar in appearance. It would be quite interesting to ascertain if the two subspecies can interbreed, and whether they are evolving into a single species or otherwise.
The submarginal white chevron markings on the underside of the hindwing were used to distinguish between ssp bolina and ssp jacintha. However, intermediates are beginning to show, and rendering this physical diagnostic attribute unreliable to separate the two. These two Eggfly subspecies should be observed closely to see whether they eventually separate more distinctly or merge into a single subspecies.
Posted by Commander at 12:30 PM 0 comments