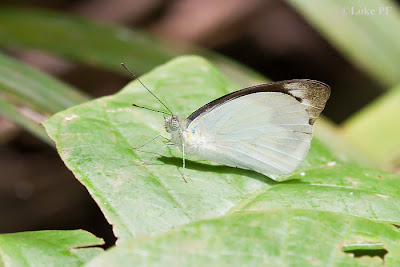 
On a routine Saturday morning outing, our group of ButterflyCircle members were out at our usual beat location within the nature reserves on 5 May 2012.  There were the usual species up and about on this sunny morning and we hadn't expected anything unusual. 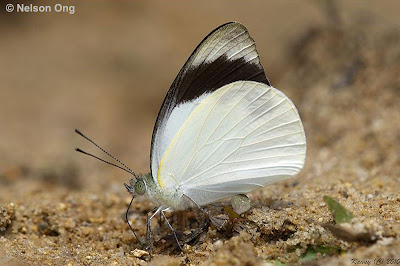 However, at the reservoir edge, we spotted a fast-flying white butterfly fluttering around the low bushes just at the entrance of the path leading to the reservoir.  It looked like one of our usual white Pieridae in Singapore, but had a more powerful flight.  It landed at a low bush next to ButterflyCircle member Loke PF.  He managed to get a shot of it before it took off up the trees and disappeared from sight. 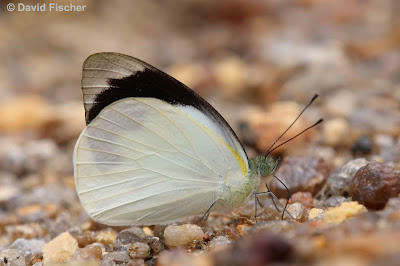 Upon close examination of the shot, we were surprised that this strange butterfly was something that had not been spotted in Singapore before!  Bearing in mind that during the months of the "butterfly season" in Malaysia, we have often spotted migratory species, particularly of the Pieridae, in Singapore.  In the past, there have been reliable sightings and photos taken of Pierids like the Wanderer, Great Orange Tip and more frequently, the Chocolate Albatross. 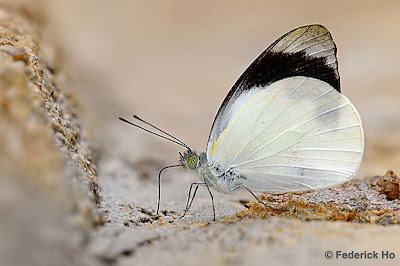 We were quite surprised that a single male of the Plain Puffin (Appias indra plana) actually made it this far south into the nature reserves area of Singapore.  Whilst it is not likely that the species will establish a longer-term colony in Singapore after the migratory season is over, we will nevertheless record it as a valid species in the Singapore Checklist. 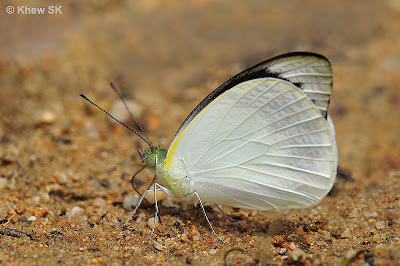 The Plain Puffin is described to range from Sri Lanka and India to south China and Sundaland.  In Malaysia, it occurs in well-wooded country at moderate elevations and is not rare.  The wings are white, with a broad irregular black margin on the forewing extending from mid costa to the tornus.  Females have their hindwings margined with black.  Neither sex is likely to be confused with any other local species. (Butterflies of the Malay Peninsula : Corbet & Pendlebury, 1992) 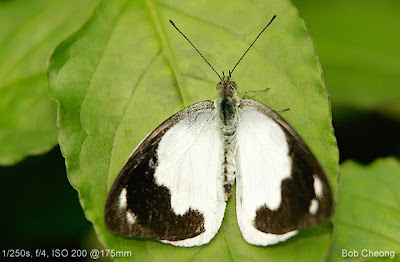 The species has been photograph quite regularly on ButterflyCircle members' trips to Malaysia, and has been recorded from Langkawi, Endau Rompin Nature Reserve and Fraser's Hill.  Invariably, males are encountered, usually puddling at damp sandy riverbanks with other butterflies from various families like the Papilionidae, Pieridae, Lycaenidae, Nymphalidae and Hesperiidae.
Checklists in reference books indicate that this species was not encountered in Singapore before.  We record this new migrant as species #303 in the Singapore Butterfly Checklist as a  "very rare" (seasonal migrant).  It is hoped that we will see more of this species in the future in Singapore!
Text by Khew SK  : Photos by Loke PF (in Singapore), Bob Cheong, David Fischer, Federick Ho, Khew SK & Nelson Ong (in various locations in Malaysia)
References:
Posted by Commander at 7:54 PM 0 comments