Life History of the Baron 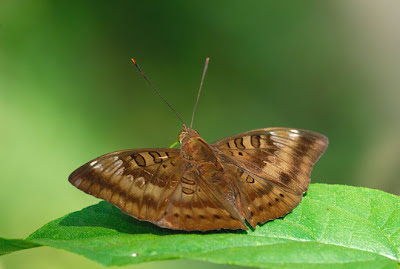 A male Baron basks in the early morning sunshine 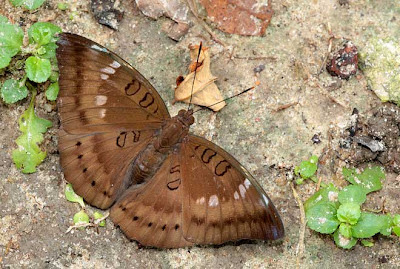 A female Baron foraging on damp ground on rotting fruit
Butterfly Biodata :
Genus : Euthalia Hubner, 1819
Species : aconthea Fruhstorfer, 1906
Subspecies : gurda Fruhstorfer, 1906
Wingspan of Adult Butterfly : 70mm
Caterpillar Host Plant : Mangifera indica
Physical Description of Adult Butterfly : The wings are dark brown above with a broad but obscure post-discal band on both wings. A few small white spots define the inner edge of this band. The spots are larger and most distinct in the female than the male. The underside is a paler brown than the upperside. The proboscis of this species is a bright yellow-green.
Field Observations of Butterfly Behaviour : The Baron is relatively common and is often seen in urban parks and gardens. The species is also observed in residential estates where its preferred host plant, the Mango, is cultivated. As the Mango tree is a favourite fruit tree found in many gardens, the Baron is often attracted to these urban areas. It is a flighty butterfly, and a strong flyer, alert and difficult to photograph. Both males and females can sometimes be found feeding on overripe fruits. 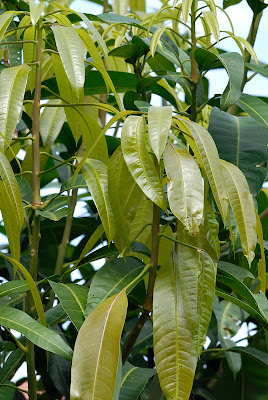 Early Stages : The eggs are laid singly, usually on the undersides of the broad leaves of the host plant. The appearance of the egg is very similar to its related species in the genera of Tanaecia and Lexias, being dome-like in shape, about 2mm in diameter, and covered with hexagonal segments from which whitish hair-like protuberances emerge. 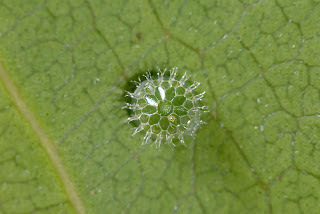 "Spiky" green egg of the Baron

After about 3-4 days, the 1st instar caterpillar emerges, eating the eggshell as its first meal. The caterpillar is yellow in colour, and sports white-edged black spines from its body. It grows to about 4mm long, before moulting into its 2nd instar. 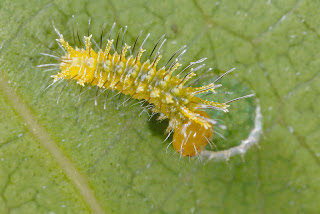 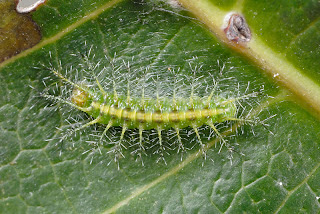 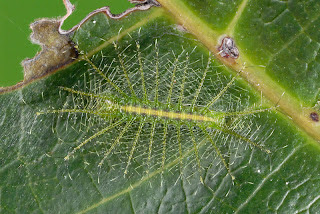 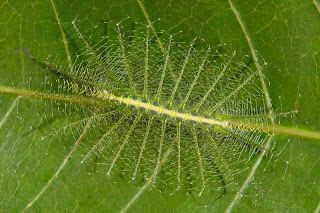 4th instar caterpillar reaching a length of 22 mm
The 5th instar caterpillar is medium green, and the yellowish-white dorsal stripe loses the earlier purple-brown spots along the edge of the stripe. The branched spines appear almost like a bird's feather, with the secondary spines arranged neatly perpendicular to the main spine. It reaches a mature length of about 45mm before shortening and adopting its pre-pupation pose. 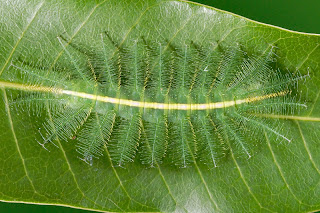 Final instar caterpillar with its prominent yellowish-white dorsal stripe
Pupation takes place on the underside of a leaf of the host plant, with the cremaster firmly attached to the mid-rib of the leaf. The light green pupa has a series of brownish spots arranged symmetrically. The pupa of the Baron appears very similar to the related species in the genus, and also the related Tanaecia and Lexias species. 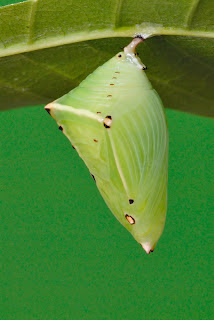 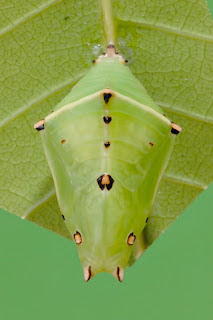 Two views of the Baron's pupa
The adult butterfly ecloses in the early morning hours and stays for about an hour as it dries its wings, before taking off to feed, find a mate and continue the circle of life and propagation of the next generation. 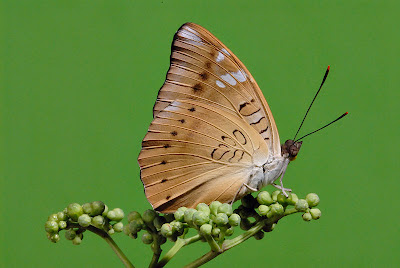 Newly eclosed female Baron showing the undersides of its wings 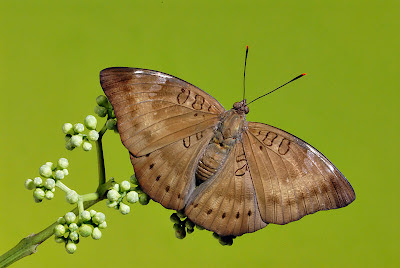