Re-Discovery of the Detached Dart 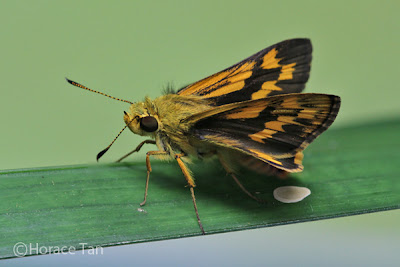 Happy New Year to all ButterflyCircle members and blog readers. It is the 1st of January of the year 2011, and we start off the year with some good news with the addition of one more species to the Singapore Checklist. The checklist is now at 296 species and counting, and we hope that the year 2011 will bring more good cheer. 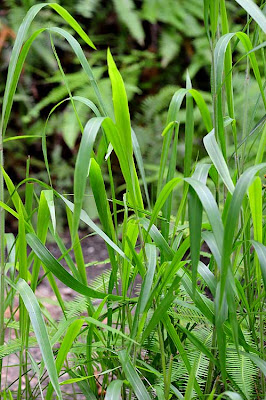 A clump of the host plant of at least 4 different species of skippers - all on the same plant!

A shot of the inflorescence of the host plant and a close up of the florets
On a late Sunday afternoon, whilst out on a short butterfly photography outing at a urban park when I came across a number of leaf shelters on a clump of long grass (possibly Panicum maximum - to be confirmed). Knowing that there would likely be caterpillars of the Hesperiidae, I checked the leaf shelters and discovered at least 5-6 caterpillars of various instars on the grass blades. 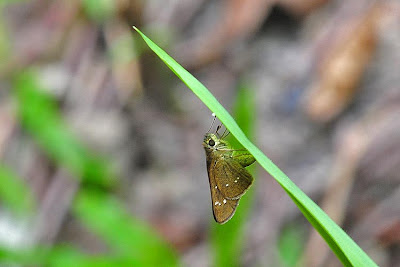 A female Formosan Swift (Borbo cinnara) ovipositing on the host plant that three other species of caterpillars were found, including that of the Detached Dart

Interestingly, the caterpillars appeared different and were likely to be of different species. As this was an opportune moment to record the life histories of some of these skipper species, I passed the caterpillars to Horace Tan, our avid cat farmer, in whose good hands I would be certain would see the caterpillars bred successfully and documented in Horace's usual meticulous recording. 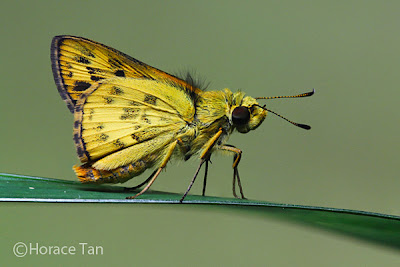 Amongst the species that were successfully bred were the Palm Dart (Telicota augias augias), Full Stop Swift (Caltoris cormasa) and a Potanthus sp. which we could not identify with certainty. Horace later obtained a few more eggs to complete the life history of this Potanthus from the same clump of host plant. 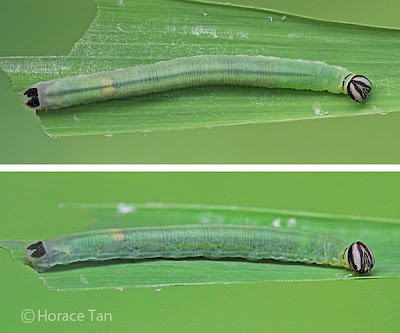 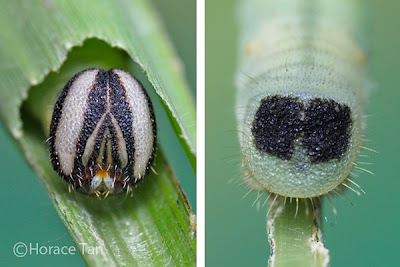 Upon eclosion, the male and female specimens were examined and matched against the various references and ID keys. After consulting two experts - one from Hong Kong and one from Malaysia, it was confirmed that the species thus bred from the eggs and caterpillar found at this urban park was indeed Potanthus trachala tytleri.
It is curious though, that the same species is given different common English names in different regions. In the Hong Kong references, this species is called the Lesser Band Dart. In Indian website references, this species is called Detached Dart. In our main Thai reference, Butterflies of Thailand, also calls it the Detached Dart. However, another Thai website calls it the Broad Bident Dart. 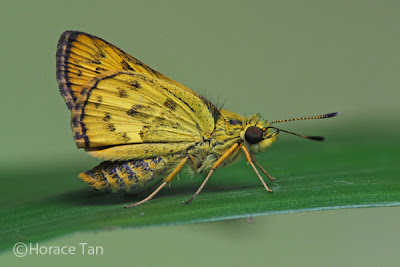 For consistency of the common names given to the species in the South East Asian region covering Thailand, Malaysian and Singapore, we will give preference to the name Detached Dart, taking reference from the name given in the Butterflies of Thailand book by Pisuth Ek-Amnuay. 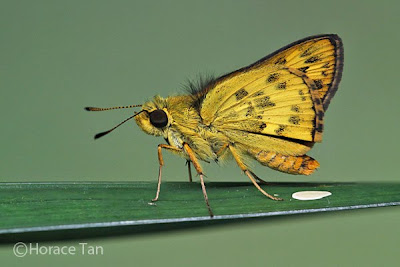 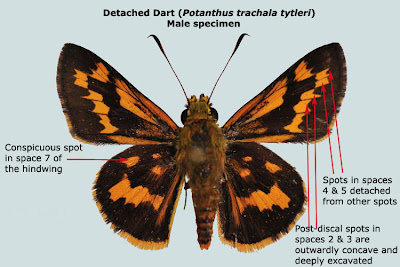 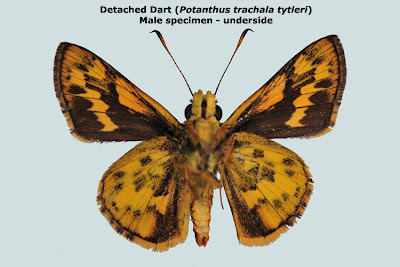 The species can usually be separated from the other species in the genus in that the spots in spaces 4 and 5 of the forewing above are detached and out of line from the spots below. The post-discal spots in spaces 2 and 3 are outwardly concave and deeply excavated. On the upperside of the hindwing, there is usually a conspicuous spot in space 7 and none in space 6. The underside is dark brown with yellow dusting. 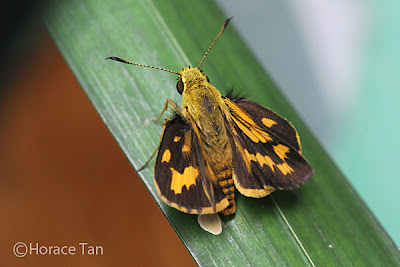 In the field, it is not easy to spot the differences amongst the lookalike Potanthus species, and it was only with this chance discovery of the early stages of this species that we now re-instate the Detached Dart to the Singapore Checklist. Given this find, there is always the possibility that more of the Potanthus species occur in Singapore as well. It will only be matter of time and luck that will yield more of these lookalike species to be added to the checklist in due course. Special thanks to Horace Tan for re-discovering this species through his recording of the early stages of the Detached Dart.

Posted by Commander at 7:00 PM 5 comments