Butterfly of the Month - February 2013 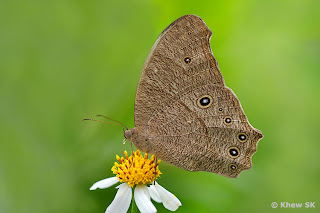 This is the last weekend of the short month of February and it's time to feature another butterfly species for the month again.  Indeed it felt like a very short month, especially with the Chinese Lunar New Year holidays and the break from work made it feel rather short. I celebrated my birthday quietly; which came and went without much fuss. Beyond a certain age, birthdays do come and go without much fuss actually! 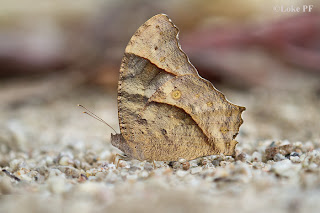 It was also a time of soul searching for Singaporeans, as the catch-word of the month, xenophobia was being tossed around like the season's yusheng (raw fish) by all and sundry, and in particular politicians and aggrieved citizens who debated passionately about the government's White Paper on Population. For the first time for as long as anyone can recall, Singaporeans staged a peaceful protest against the prospects of this little island's future population growth. Whether the number of protesters and supporters was 1,000 or 7,000, depending on who reported it, it didn't quite matter. It was still a watershed event that could portend of many heated debates in the near future. 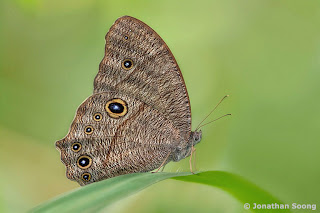 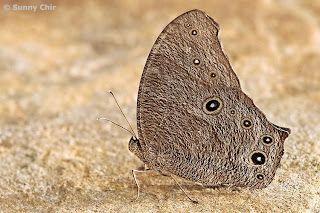 We may be on the threshold of a new era of politics in Singapore, where the citizens' voice grow louder and there has to be even more transparency, open debates, consultations and dialogues between the government and Singaporeans on policies that affect the lives of the citizens of this Little Red Dot. The social media chatter and the cacophony of voices over cyberspace are no longer merely 'noise' that can be ignored by any country's politicians, much less in IT-savvy and well-connected Singapore.  "Whither Singapore?" was a question that a prominent ex-Minister apparently asked.  Whither indeed! 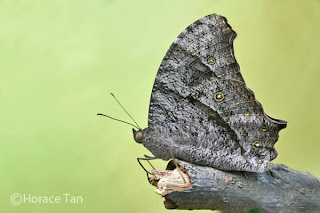 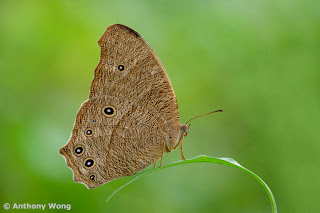 
February 2013 was certainly a very wet month for Singapore with exceptionally rainy days. For the first time since I can remember, this was the wettest Chinese New Year that I've ever encountered in my life. It rained practically every day since the first day of the Year of the (Water) Snake, and for the next few consecutive days, putting paid to my plans of enjoying the holidays out with our beloved butterflies. Most of our regular butterfly shooters spent their time cooped up at home moping away, if they didn't have to perform the customary visits to family and relatives during the Chinese New Year. 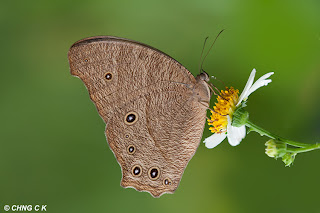 This month's butterfly is the Common Evening Brown (Melanitis leda leda) a rather large and drably coloured butterfly sporting a wingspan of between 60-70mm. The English common name gives a hint about the time of activity of this Satyrinae. Indeed, the Common Evening Brown usually flies in the early hours of dawn and is most active shortly before the hours of dusk. It is not often seen during the day, except if disturbed. The flight of the butterfly is rapid and erratic, but it keeps at low level and after short hops, it settles down in thickets and dense vegetation where its undersides' cryptic patterns camouflage it very well. 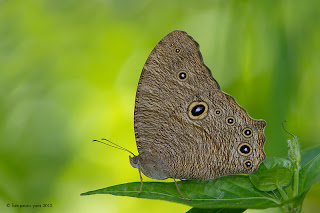 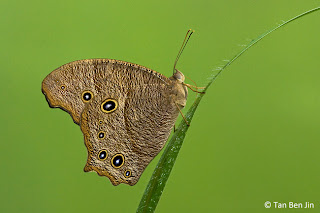 The Common Evening Brown's upperside is dark brown with black sub-apical white-centred spots and inwardly shaded with orange brown. The very varlable underside it usually buff or grey, with fine dark brown striations. A submarginal row of yellow-ringed ocelli is usually found in the more common form of this species. The variations on the underside patterns seem to be related to the wet and dry seasons in the region. 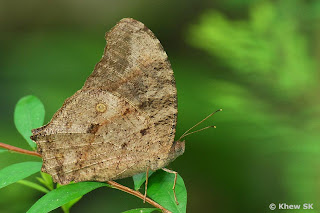 A heavily variegated form of the Common Evening Brown


The Common Evening Brown is crepuscular and attracted to the lights of homes in the evening hours and the butterfly is quite regularly seen perched on the walls and ceilings of residences in the vicinity of wooded areas where the species occurs. It was reported in a research paper that during the monsoon or rainy months of the year, species such as the Common Evening Brown tend to be attracted to artificial light from human habitats after they are disturbed from their usual resting places by the heavy downpours. 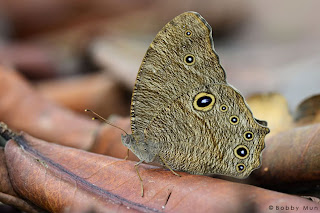 
This disturbance induces them to move to another safe location, and in the absence of natural light, a source of artificial light may be sufficient to attract them to search for a safe place to roost. Unfortunately, in homes and residences, any insect that is attracted to the artificial lights become fair game for the resident house lizard (or chichak) lying in wait for dinner! 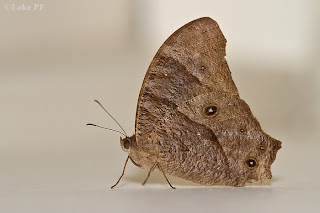 This Common Evening Brown was photographed, perched on a wall at the common corridor of a Housing & Development Board flat on the 16th storey!


In urban Singapore, where the residential apartments are high rise, the appearance of the Common Evening Brown along the common corridor of an apartment block at the 16th storey comes as a surprise! For a butterfly that tends to lurk close to the ground and typically flies at no more than 3m from the ground, flying high up in our urban jungle and perching on the wall of a building at more than 45m from the ground would be something of a remarkable occurrence! 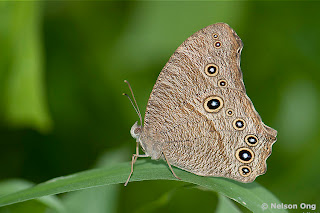 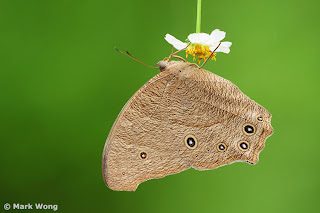 The caterpillars of the Common Evening Brown has been bred on Guinea Grass (Panicum maximum) and certain species of bamboo. The species is widespread and occurs in open wastelands and back mangroves, as well as in parks and gardens where its host plant can be found. But it is by no means considered a common species. At times, the butterfly can be observed feeding on rotting fruits, which it shares with other Satyrinae and Nymphalidae species. 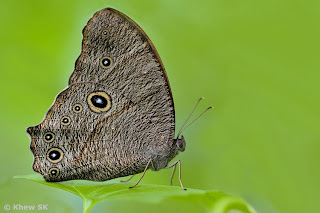