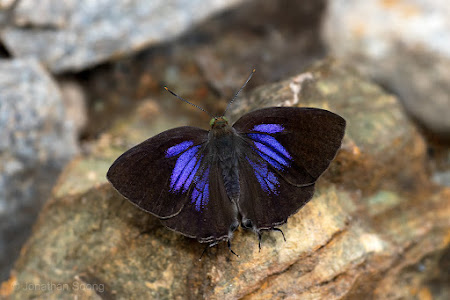 
This weekend's blogpost takes a look at the various butterfly species found in Singapore that bear the English common name "Royal". The word royal is often defined as "used to indicate that something is connected with a king, queen, or emperor, or their family." In describing something as royal gives it a complimentary stature of being beautiful, majestic or an object of exceedingly high recognition. 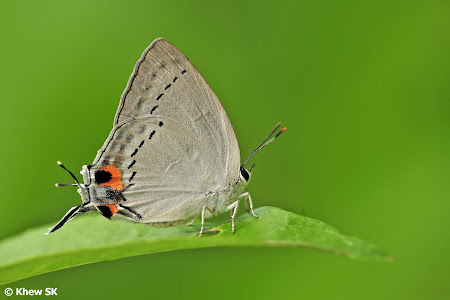 In our butterfly world, quite a few species have been christened with the "royal" title. In most of them, the name is certainly befitting of their beauty and awe-inspiring colours. The Singapore species that bear the name "Royal" are largely from the sub-family Theclinae of the family Lycaenidae. Part 1 of this blogpost introduces four of the more frequently encountered species in Singapore. 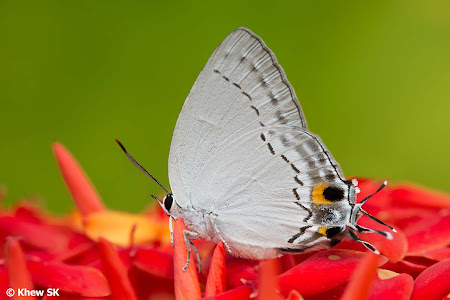 A Peacock Royal perches on a bed of red Ixora flowers

The Peacock Royal is the commonest of the "Royals" and is widely distributed in Singapore. It can regularly be found in urban parks and gardens but is sometimes seen in the forest edges of the nature reserves of Singapore. Both males and females are observed with regularity, especially when feeding on the red flowers of the Javanese Ixora. 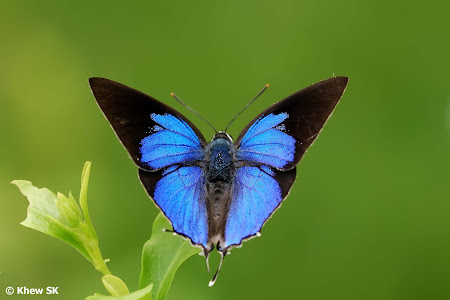 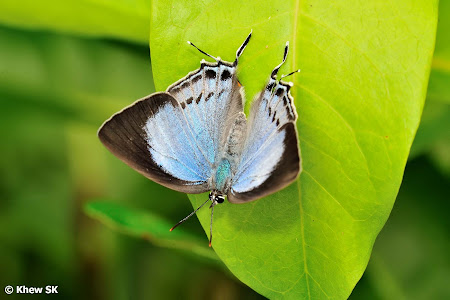 Upperside of a male (top) and female (bottom) Peacock Royal

The upperside of the male Peacock Royal is a beautiful royal blue with a broad black apical border on the forewing. The female is pale blue with broad black apical borders on the forewing and a series of black squiggly post-discal striae on the hindwing. The underside of both sexes is greyish-white with post discal striae and series of marginal and sub-marginal spots. The large black tornal spots on the hindwing are orange-crowned. The hindwing features a pair of white-tipped tails at veins 1a and 2. 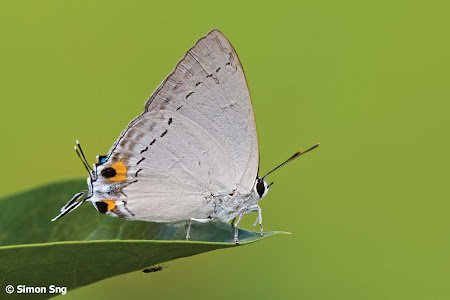 The Peacock Royal is skittish and a fast flyer. It has jet-black eyes which can immediately distinguish it from its other related cousins in the genus. The caterpillar of this species feeds on parasitic plants like Dendropththoe pentandra and Macrosolen cochinchinensis,both of which are common in urban gardens. 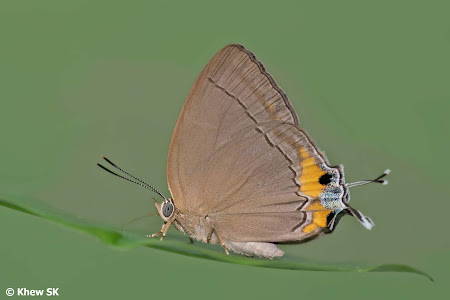 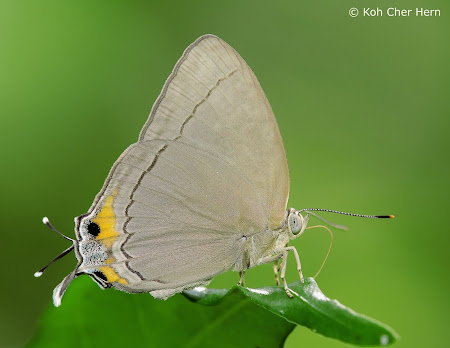 The upperside of the male is a shining greenish blue whilst the female is a pale purplish blue. Both sexes have a broad black apical border on the upperside of the forewing. The underside is a drab greyish brown and are whitened at the dorsum. Each hindwing has a pair of white-tipped tails at veins 1b and 2. The tornal area has iridescent blue scales flanked by two orange-crowned black spots. 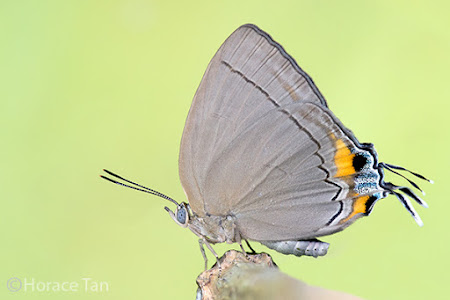 Also a skittish flyer, the Felder's Royal has a habit of perching on the underside of a leaf to rest or hide itself. The compound eyes are transparent and silvery grey. It has been successfully bred in Singapore on the parasitic plant Macrosolen cochinchinensis. 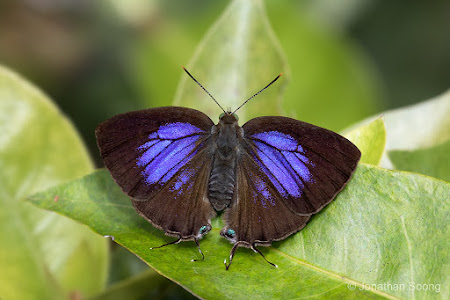 The Chocolate Royal is another moderately rare species in Singapore. It makes an appearance during certain months of the year, but then may be absent for many months of the year. Its host plants are Eurya acuminata and the common Ixora javanensis. Hence it is curious that it is not as common as it should be, given the abundance of its host plants. 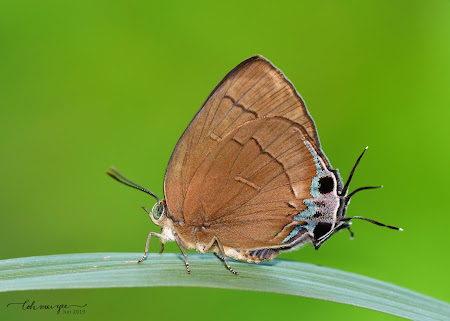 The upperside of the male Chocolate Royal is a majestic deep purple, with broad black borders on both wings. The female is paler with the basal portions of the forewing entirely purple. The underside is a dark chocolate brown with darker narrow post-discal lines on both wings. The black tornal spots on the hindwing are crowned with metallic green scaling without any orange crowning as in the preceding two species. There are two white-tipped tails at veins 1b and 2 on the hindwing. 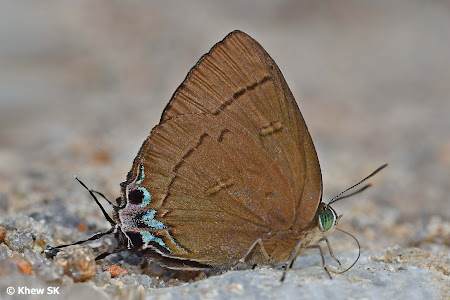 A Chocolate Royal puddling at a damp footpath

The Chocolate Royal is often seen flying rapidly amongst low shrubbery and feeding on the flowers of various Ixora hybrids. Occasionally, males are seen to sunbathe with its wings opened flat. The species has also been encountered puddling at muddy streambanks and damp footpaths in the forested areas. 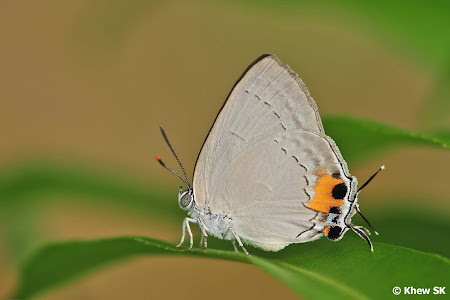 The White Royal was a recent re-discovery in 2007 when it was spotted at an urban park in Singapore. The species was subsequently observed at various locations across the island, particularly in the vicinity of its caterpillar host plant, the parasitic Scurrula ferruginea. 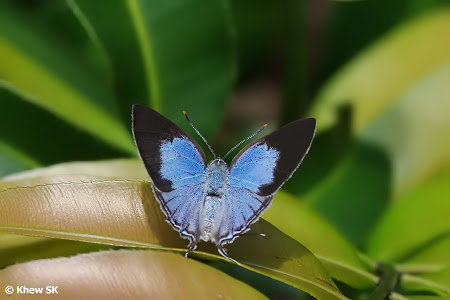 The upperside of a female White Royal

The upperside of the male White Royal is a deep lustrous blue whilst the female is a paler sky blue. Both sexes have a broad black apical border on the upperside of the forewing. The underside is greyish white with post-discal black streaks. The hindwing tornal area has the usual orange-crowned black spots. There is a pair of white-tipped tails at veins 1b and 2 of the hindwing. 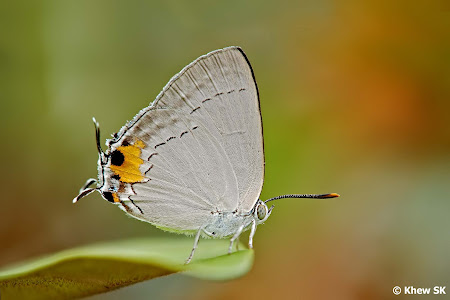 A female White Royal perches on the edge of its caterpillar host plant.  Note transparent eyes

The White Royal is skittish and fast flying, and often stays in the vicinity of its caterpillar host plant. It is considered moderately rare but when a colony is located, there are usually several individuals flying around. However, in recent years, the species has been absent and sightings have been few and far in between.


And there you have it, the more regularly seen Royals in Singapore, although none of them can be considered common. In the next part of this article, we take a look at the rarer species of Royals that have been recorded in Singapore over the past two decades.