Life History of the Dark Posy

Life History of the Dark Posy (Drupadia theda thesmia)
Following the earlier blog article on the Three Posies, Horace Tan shares his latest discovery on the life history of one of the Posies - the Dark Posy.

Physical Description of Adult Butterfly:
The typical form of the male is dull purple above, whereas the -f minara form has an orange discal patch on the forewing. The female is brown, with a bluish grey tornal patch on the hindwing which has a few black submarginal spots. On the underside, the forewing is orange brown in the male and orange in the female, and the hindwing is mainly white; the forewing is marked with darker transverse stripes, and the hindwing markings consist of black spots and lines, with metallic green scalings and black spots at the tornus. There are three pairs of tails at the end of veins 1b, 2 and 3 on the hindwing. The species can be distinguished from the rather similar D. ravindra (Common Posy) in that the space between the two black stripes forming the cell-end bar on the underside hindwing is white, and not filled in with black as with D. ravindra.

Field Observations of Butterfly Behaviour:
This species is relatively rare in Singapore and it is mainly found at localised areas within the Central Catchment Area where the host plant Combretum sundaicum is common. In the early afternoon, the adult butterflies can be spotted flying from one perch to another perch in quick zig-zag flights. In sunny weather, they have the habit of fully opening their wings to sunbathe. 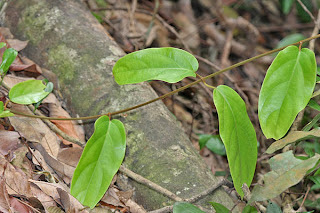 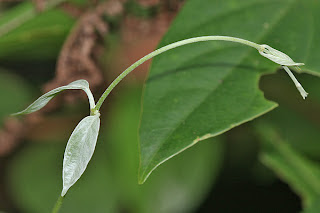 Eggs are laid singly on the young stem or the petiole of the liana (woody climber) Combretum sundaicum. Each egg is white with a beige tinge; circular with a depressed micropylar area and has many tiny pits dotting the surface. With a diameter of 0.9mm, the egg is rather large for a lycaenid species. 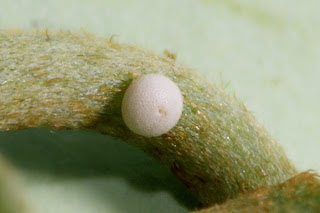 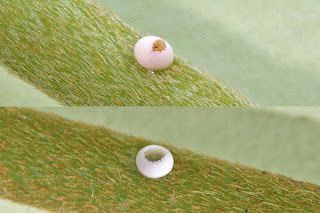 It takes 2 days for the collected egg to hatch. The young caterpillar eats away the upper portion of the egg shell to emerge. With a length of about 2mm, it is cylindrical with long setae (hairs) and pale green in color. As it grows, it will assume the more typical onisciform (woodlouse) shape. 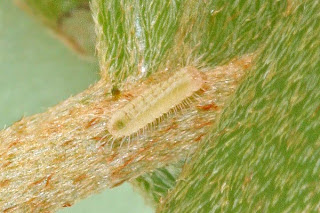 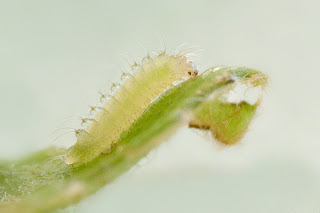 The 1st instar caterpillar feeds by skimming the surface of a young leaf. After 2 days of growth, and reaching a length of about 4mm, its moults to the next instar. The second instar caterpillar has short fine hairs covering its body and two stripes of faint white markings flanking the green dorsal ridge. The prothoracic shield is diamond in shape but rather inconspicuous. The feeding is still done via eating away the upper layer of the leaf surface. 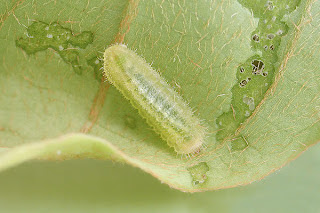 The 2nd instar caterpillar reaches a length of about 7mm, and after 2 days in this stage, it moults again. In the 3rd instar, the dorsal markings are more prominent and the anal plate also features a fine red line. The caterpillar now feeds by eating along the leaf edge and devours the whole leaf. The typical lycaenid nectary organs (both dorsal organ and lateral tentacular organ) are now discernible. Even in the absence of ants, the dorsal organ excretes plentiful amount of clear fluid, suggesting a strong caterpillar-ant association in the wild. The 3rd instar takes 3 days to complete with the body length reaching about 10-11mm. 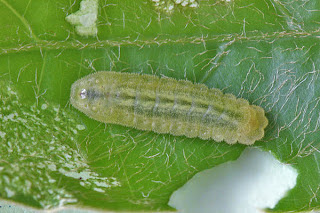 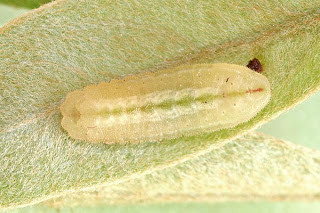 3rd instar caterpillar, length: 9mm, resting for the moult to next instar 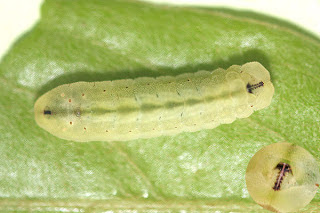 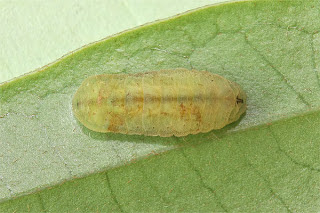 The pre-pupa caterpillar prepares for pupation by spinning a silk girdle and a silk pad to which it attaches itself via cremastral hooks. Finally after 12 days of larval growth, pupation takes place. The pupa has a shape typical of any lycaenid species, and a length of about 14mm. It is light yellowish brown and dotted with small black specks. 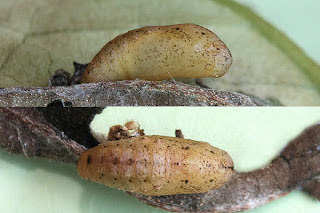 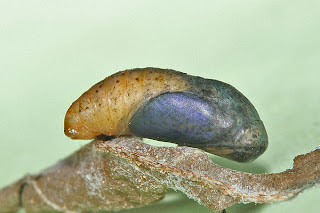 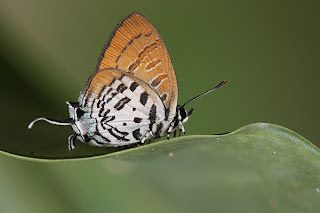 Another Dark Posy in the field