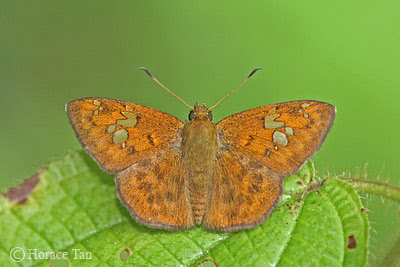 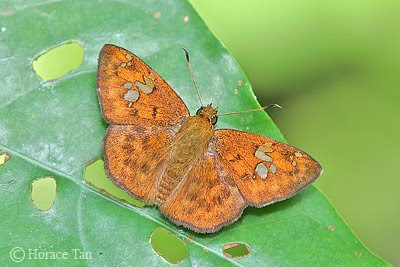 A male Fulvous Pied Flat sunbathing in the late afternoon.. 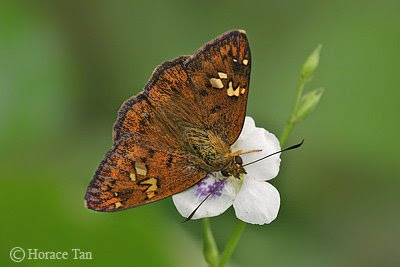 A male Fulvous Pied Flat visiting a flower of Asystasia gangetica in a forest clearing. 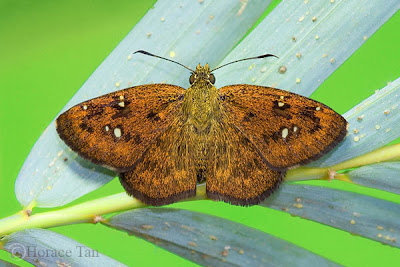 Physical Description of Adult Butterfly:
Both sexes have reddish brown wings on both under- and uppersides. The forewing has a dark submarginal fascia, and the hindwing is traversed by irregular lines composed of dark, diffuse spots. The male has two large, yellow, hyaline spots at the end of the forewing cell, which are conjoined to form a single, outwardly deeply indented spot, and there is a small spot above it in space 11; in addition there are rather large spots in spaces 2 and 3, and small subapical spots in spaces 6, 7 and 8. The female has the same set of spots but most of these are smaller than those present in the male, and the lower cell spot may be absent.

A sequence of three shots of a male Fulvous Pied Flat with the main light source shifted from front to back to show the hyalinity of the forewing spots.

Field Observations of Butterfly Behaviour:
This species is rarely encountered in Singapore. Sightings are restricted to sites in the Central Catchment Nature Reserves where the host plant can be found. The adults are fast-fliers and can only be observed when they stop to feed on flowers and bird dropping, or when the females are carrying out oviposition routines of leaf hopping. When resting, as with other "flat" skippers, adults have the habit of perching on leaf undersides.

Early Stages:
The host plant, Cyathula prostrata (common names: Hookweed, Nyarang, 倒扣草 ， 杯苋), is a creeping and straggling to more or less erect herb. It has opposite, hairy leaves which are oblong or rhomboid in shape. Flowers occur in clusters of 1-3 on spikes. This plant has a wide distribution and can be found in Asia, Australia, Africa and tropical America. Parts of the plant are used as food and medicines for diarrhoea, dysentery, pain-relief etc. Locally, this plant can be found in waste places, forest margins and alongside trails in the northern and western catchment reserves. All early stages of the Fulvous Pied Flat feed on the leaf lamina of the host plant and retreat to their leaf shelters between feeds. Typically, they rest in a curled-up posture within the shelter. 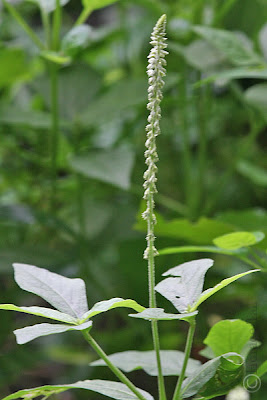 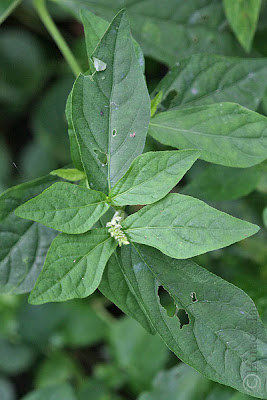 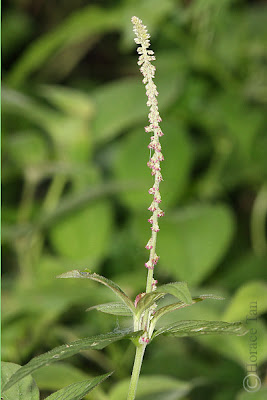 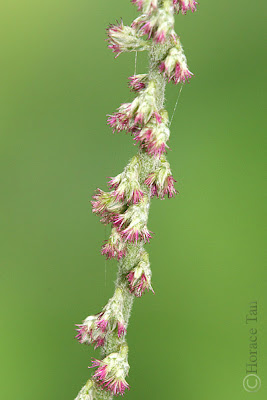 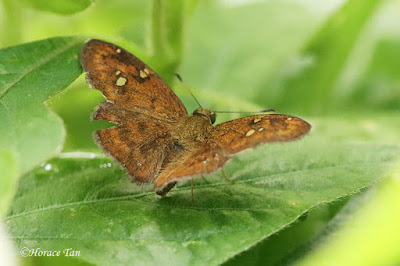 A mother Fulvious Pied Flat laying an egg on the leaf of the host plant.


The eggs are laid singly on the upperside of a leaf. Each egg is whitish when freshly laid, but turn pinkish about 1 day later. As it develops further in the next two days, the egg decolorize to white. The egg is dome-shaped with vertical ridges, and has a diameter of 0.7mm. Eggs of the Fulvous Pied Flat are not concealed in a mess of fine hairs as is typical for a number of "flat" skippers such as the Chestnut Angle. 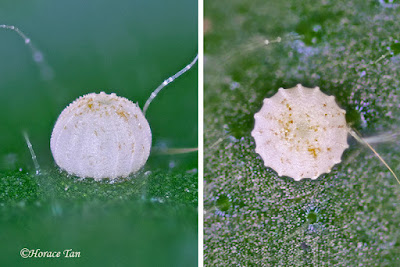 Two views of an egg of the Fluvous Pied Flat. Diameter: about 0.7mm. 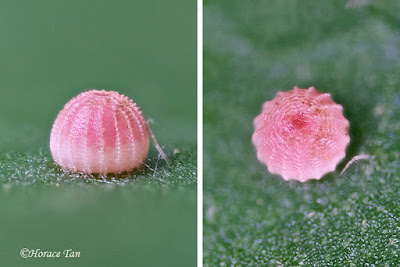 Two views of a 1-day old egg of the Fluvous Pied Flat. 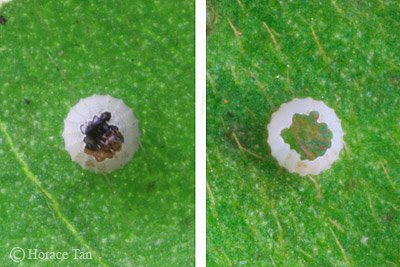 
It takes 4 days for the egg to hatch. The young caterpillar eats just enough of the shell to emerge, and has a length of about 1.8mm. Its cylindrical-shaped body is reddish orange, one red dorso-lateral line along each side of the body, and has a transverse black line right behind a black bilobed head.
After leaving the egg shell, the 1st instar caterpillar makes its way to the leaf edge to construct its first leaf shelter. It rests within the shelter and ventures out to eat the leaf surface nearby. The intake of this diet gives the caterpillar a greenish undertone. 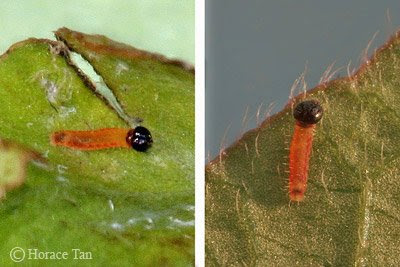 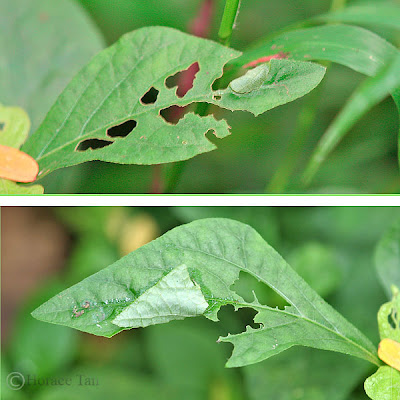 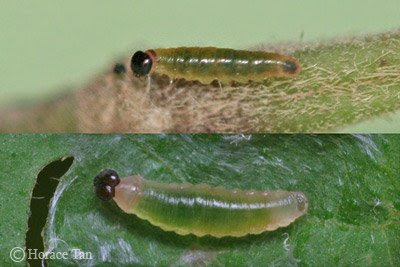 
The 3rd instar caterpillar has a similar appearance as in the previous instar except for a faint dorsal line, and two thin white dorso-lateral lines running the sides of the body. The 3rd instar lasts about 5-6 days with the body length reaches 8mm. 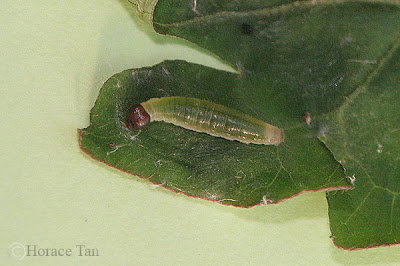 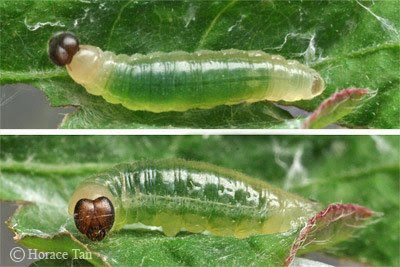 
The 4th instar caterpillar looks similar to the earlier instars with the only visible difference being the distinctive white speckles on its body and more distinctive dorso-lateral lines. The 4th instar takes about 6-7 days to complete with the body length reaching 12-14mm. 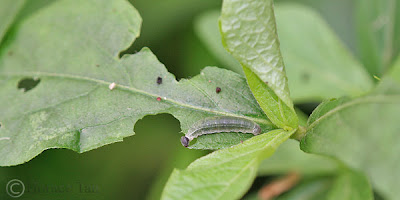 An early 4th instar caterpillar found feeding on the host plant in the nature reserves. 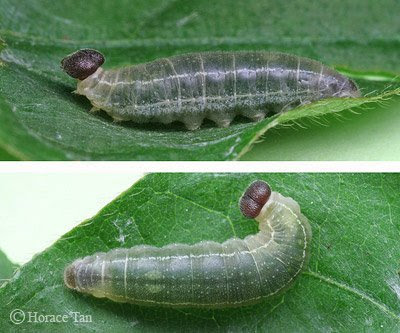 
The final and 5th instar caterpillar is similar to the 4th instar caterpillar. The head capsule is dark reddish brown, and its surface is rough and covered with a layer of short fine hairs. This final instar takes about 7 days to complete with the body length reaching about 18-20mm. 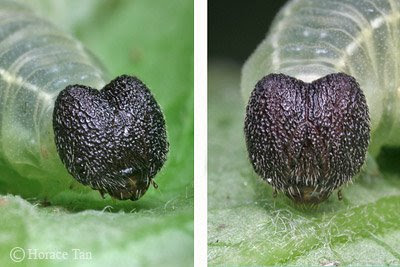 Two views of the head capsule of a 5th instar caterpillar. 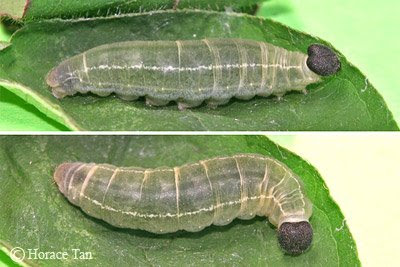 
Towards the end of 5th instar, the body of the caterpillar gradually shrinks in length and decolorizes to a milky yellow color. Soon it becomes dormant in its leaf shelter and enters the prepupatory phase which lasts for one day. Two views of a pre-pupatory larva of the Fluvous Pied Flat.


Pupation takes place within the leaf shelter. The pupa secures itself with its cremaster attached to a short transverse band on the leaf surface, and has a silk girdle. The lightly hairy pupa is mostly green in base colour but with abdominal segments mostly in white. It has a short thorax and a rather long abdomen.
There is also a pair of small dark brown projections on the anterior part of the mesothorax. Length of pupae: 14.5-16.5mm. 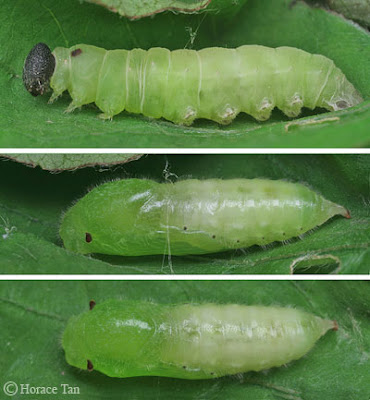 Top: a pre-pupa very close to the pupation event. Middle and bottom: Two views of a fresh pupa of the Fluvous Pied Flat.


After 6-6.5 days, the pupa becomes mostly dark brown in color with the spots on the forewing somewhat distinguishable through the now transparent pupal skin. Eclosion takes place the next morning. 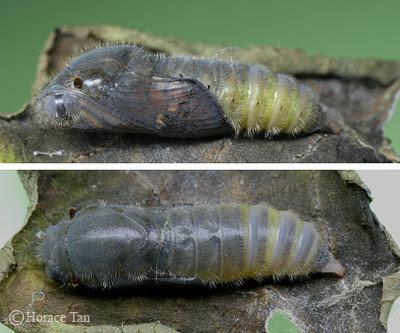 Two views of a mature pupa of a male Fluvous Pied Flat. 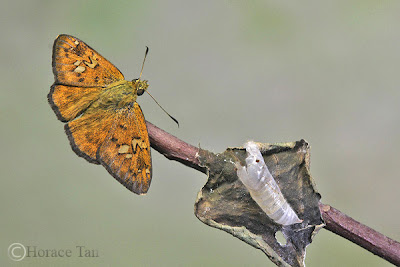 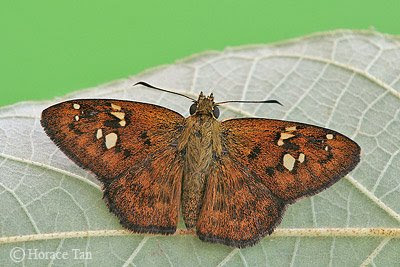 
References:
Text and Photos by Horace Tan.
Posted by Horace at 9:00 PM 0 comments