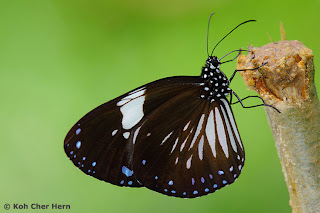 Our butterfly of the month for March is very impatient to be featured, so this blog article is coming out earlier than usual on this third month of 2013. As far as the wet weather is concerned, it's been warming up from the rainy days that we experienced in February. Though there have been really hot days, there are afternoon passing showers that can strike unexpectedly and then leave the rest of the day hot and extremely humid again. 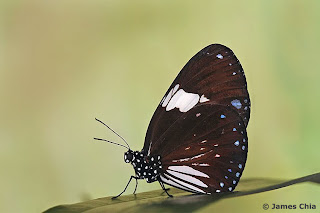 Over here in Singapore, the government presented the budget for the fiscal year 2013 that spurred lots of debates from the residents - from coffee shops to corporate board rooms. Touted to be a progressive budget, the various packages affected practically everyone in Singapore, from individuals to businesses; Singaporeans and foreigners; singles and families. But like all things, not everyone will be pleased, and there will always be some disgruntled quarters. 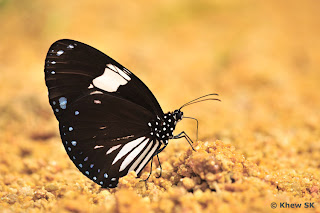 The hotly-debated issues of congestion and crowdedness that grew worse in Singapore over the years continue to dominate social media websites, print media and formal and informal discussions all over the island. There have, however, been debates that border on racism, and coming from purportedly Singaporean netizens, this cannot be good for anyone in the longer term at all. 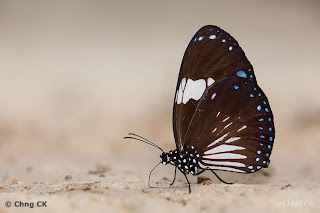 On the issue of the high cost of living, one sought-after commodity stands out prominently - car ownership. In Singapore, we have the unique Certificate of Entitlement (COE) system where one has to first procure a certificate to entitle one to own a car. It would appear like a logical solution to alleviate congested roads in Singapore, until one realises that to procure a piece of paper that is the COE may cost in excess of SGD90,000! In some neighbouring countries, that amount could land you a decently-sized house! 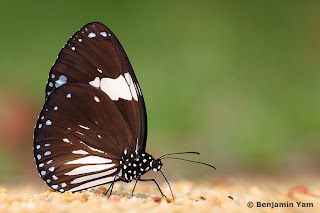 Speaking of neighbouring countries, the recent month-long incursion by armed Filipino Islamic militants is something that is virtually unheard of in recent years. The normally peaceful SouthEast Asian region was rocked with news of the clashes between the insurgents and the Malaysian police and military forces that left over 60 dead. Scores of followers of a self-proclaimed Philippine sultan landed in the state of Sabah on Borneo island last month to assert a long-dormant territorial claim in what has become Malaysia's worst security crisis in years. In military parlance, this could be well considered an invasion of sorts that would provoke retaliation of the highest order. 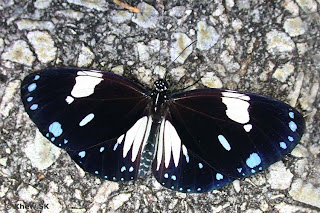 Let us leave the woes of the human world aside and come back to our butterfly of the month. For March 2013, we feature a Danainae species that is fairly common in Singapore and Malaysia, the Magpie Crow (Euploea radamanthus radamanthus) Although the butterfly cannot be described to be abundant, it is widespread in distribution and on some occasions, several individuals (usually males) were encountered in the same location. They are usually attracted to flowering trees e.g. Syzygium spp., damp wooden structures and decomposing organic matter. 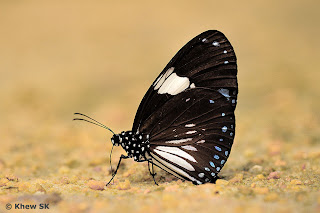 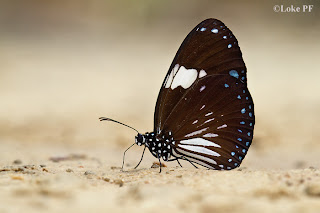 
The Magpie Crow is so named, probably because of its black-and-white appearance, reminescent of the typical Magpie, a group of birds of the family Corvidae. The upperside of the wings of the Magpie Crow is bluish-black, with submarginal pale blue spots and white patches on the discal area of the forewings and long white streaks on the dorsal area of the hindwings. Males feature a pale blue brand on the forewings above. 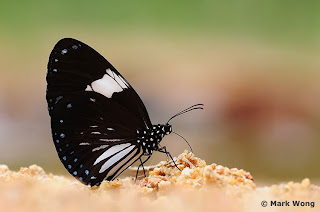 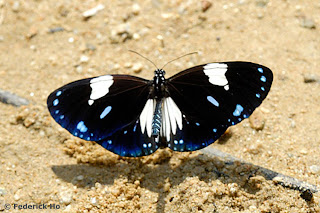 The male Magpie Crow is by far the commoner of the two sexes, and appears in urban parks and gardens as well as in forested areas of the nature reserves. When attracted to either flowers or the pungent odours of decomposing organic material that it likes, the butterfly will often stay for a some time, circling around its target and repeatedly returning for a taste of its preferred 'cuisine'. Even when disturbed, it will stubbornly stay in the vicinity and return to the food source when the threat passes. 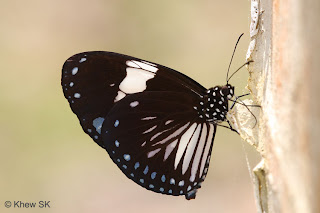 
We have encountered the male Magpie Crow puddling on sandy streambanks which have been tainted by decomposing organic material, as well as damp timber structures. On one occasion, a male Magpie Crow was found feeding on the efflorescent salts from a plastered building. It was probably looking for the chlorides that were oozing out from the efflorecence. The butterfly also appears regularly when there are flowering trees where it feeds greedily on the flowers in the company of many other species of butterflies. The Magpie Crow is sometimes also partial to human sweat, and can be brazen enough to alight on an observer and stay to feed off the salts from a sweaty finger! 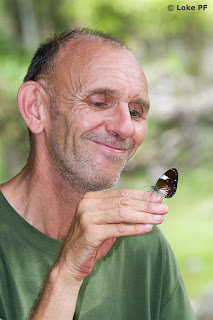 A male Magpie Crow feeds on the sweaty finger of ButterflyCircle member Les Day, quite brazenly confident that it will not be caught, killed and pinned in a collection.


The female Magpie Crow is rare, and appears almost brownish compared to the male's deep bluish-black colouration. However, the female sports larger areas of white, making it much whiter in appearance when it flies around. The submarginal spots on the female's wings are white, instead of pale blue as in the male. Females are more often encountered at flowering plants, or just flying around treetops and shrubbery. We have thus far not observed any female Magpie Crows puddling like the males. 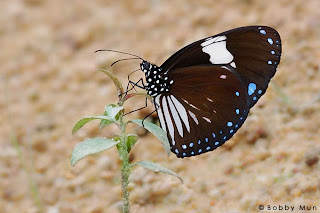 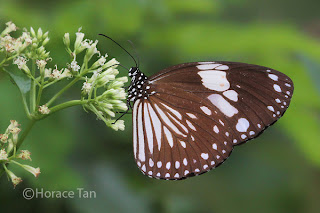 
The Magpie Crow flies slowly in an unhurried manner, but is often very skittish and alert to any intrusion into its space. Like many of its other related species in the genus Euploea (or commonly referred to as "Crows"), the Magpie Crow is believed to be distasteful to birds and displays aposematic colouration that warns would-be predators of its distastefulness. The early stages have not been recorded in Singapore yet, but the caterpillars are believed to feed on a lactiferous host plant. 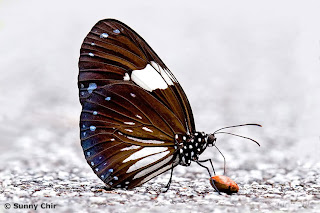 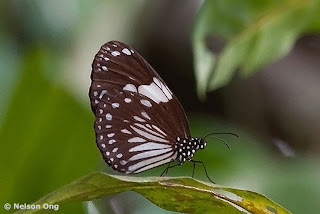 
It is noteworthy to mention that the two female forms of the rare Courtesan (Euripus nyctelius euploeoides) both mimic the male and female of the Magpie Crow for protection against predators. The female form-isina is a good mimic of a male Magpie Crow, with its bluer colour and smaller patches of white, whilst female form-euploeoides that has more extensive white patches on the wings and is pale brown, mimics the female Magpie Crow. 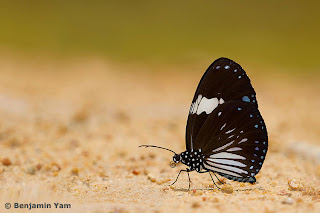 Posted by Commander at 7:18 PM 0 comments