Butterfly of the Month - October 2017 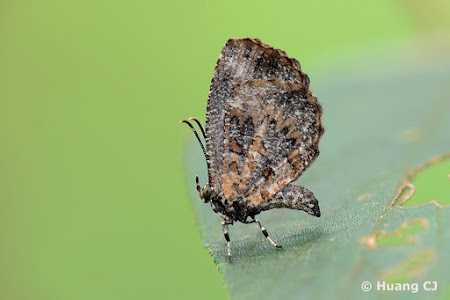 
We are into the 10th month of 2017 now, and the cooler temperatures and wetter weather of the year end monsoons are upon us. Those countries in the northern hemisphere prepare for autumn and the coming of winter. A recent trip to Shanghai and Suzhou was met with heavy rain and I had experienced for the first time, what a 5-hour delay on an SIA flight was like. Probably nothing as far as flight delays are concerned, but a most unproductive day sitting on the plane and watching movies with glazed eyes. 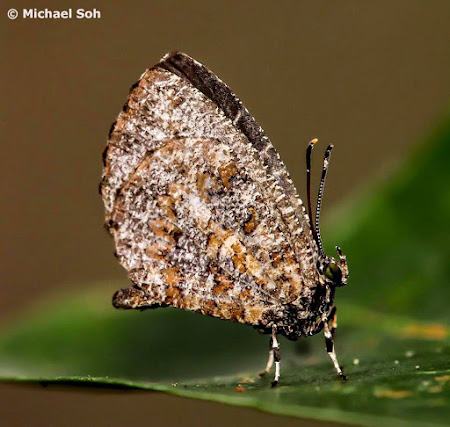 In Singapore, the wetter weather saw a drop in butterfly activity in the majority of our favourite hunting grounds. Butterfly photography outings over the past couple of weeks were largely unproductive (besides the high chance of getting soaked in one of our tropical thunderstorms). But cooler days (and nights) were a welcome relief from the hot humid days in the earlier months of the year. 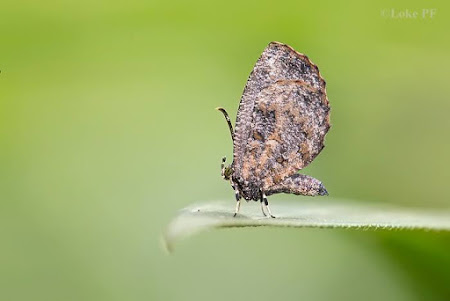 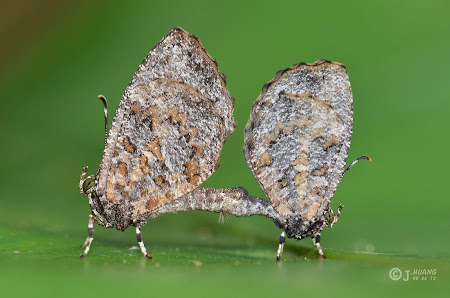 Just in the first week of October, another senseless shooting occurred in Las Vegas in the US. Despite calls for gun control, very little has been done, and how many more innocent lives must be lost before someone will say enough is enough? A gunman opened fire from a hotel overlooking a country music concert in Las Vegas, killing at least 58 people and wounding more than 489 others in the deadliest shooting in modern U.S. history. 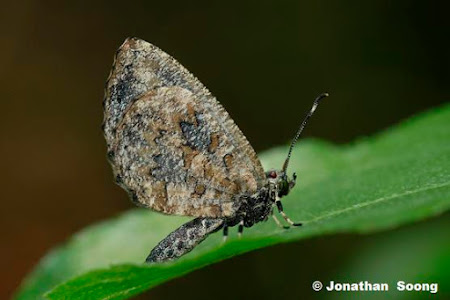 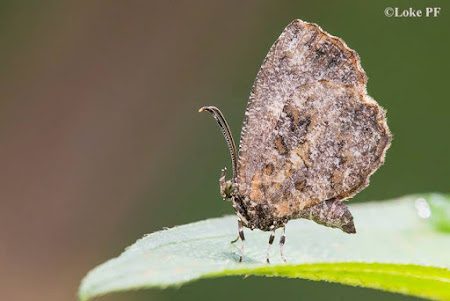 It is quite surreal as one views the many videos that are on the internet. It is a random shooting and you wonder who a bullet finds in that crowd, and who a bullet misses. Life is fragile indeed. Singapore is fortunate to have strict gun control laws and it is highly unlikely that a mass shooting like this can happen, even though there are no guarantees that there are determined madmen around who try to beat the system and laws. 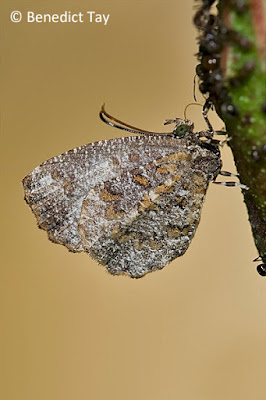 Around the region, another natural disaster in the making is the potential eruption of the Indonesian active volcano, Mount Agung in Bali. Mount Agung has reached a "critical" stage with 500 tremors shaking the area a day, according to Indonesia's National Disaster Management Agency. According to news reports, more than 134,000 people have fled the area surrounding the Mount Agung, fearing an imminent eruption. Despite the local tourism authorities assuring tourists heading for Bali that it is still "safe", it is inevitable that the tourism numbers will drop significantly as people will avoid the area. 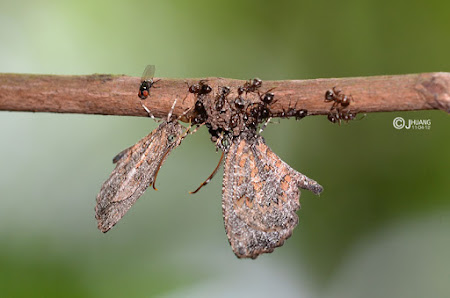 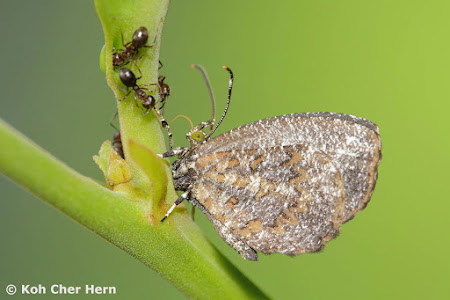 Again, our little island of Singapore is blessed in that we are free of typhoons, earthquakes, erupting volcanoes and other natural disasters that we often see around the world. There have been tremors felt in parts of Singapore whenever an earthquake occurs in neighbouring Indonesia, but nothing serious has affected the island in recent history. 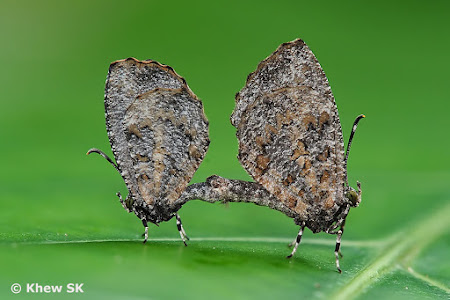 A mating pair of Pale Mottles

Moving away from disasters, both natural and man-made, we turn our attention to our Butterfly of the Month for October 2017 - the Pale Mottle (Logania marmorata damis). This tiny butterfly belongs to the interesting sub-family of butterflies called Miletinae or collectively called the Harvesters. The caterpillars of this subfamily are considered "carnivorous", as their caterpillars feed on coccids, mealy bugs, aphids and other insects. 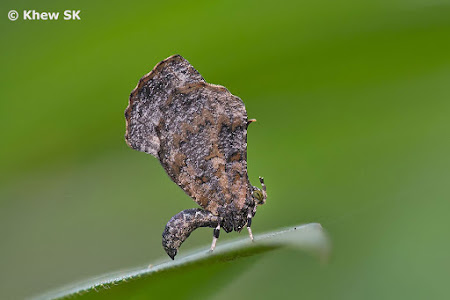 The Pale Mottle is not considered a rare species in Singapore, as they are widespread and can occur anywhere where their caterpillar food source is available on a wide variety of plants. The adult butterfly flies with a restless erratic flight, often remaining in flight for long periods of time without stopping to rest. 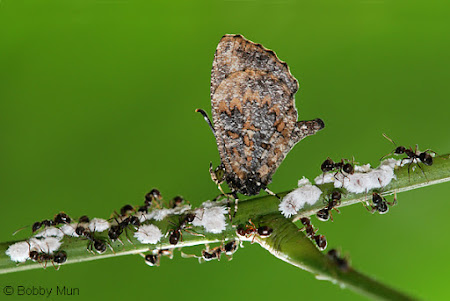 With a wingspan of only about 20mm, the Pale Mottle frequents shaded areas in forested localities over a wide variety of habitats. It can even be found in urban gardens and parks. As it flutters around the shrubbery, one can often expect it to land on a congregation of ants tending to aphids or other similar 'pests' that exude sweet secretions. 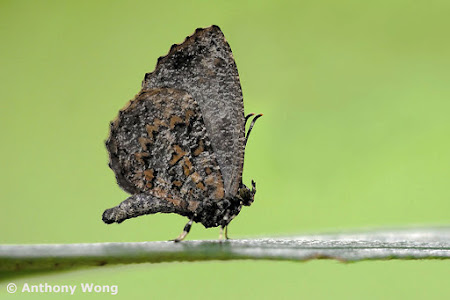 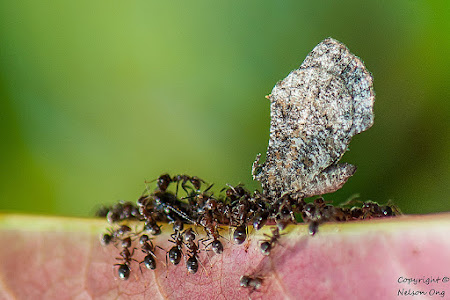 A Pale Mottle amongst ants - what makes the butterfly 'invisible' to these predators?

The Pale Mottle is often observed to feed on the secretions of these insects where the attending ants curiously leave the butterfly alone. Are there any natural 'cloaking devices' that the butterfly possesses that make it invisible to the ants? Or the ants instinctively know that the butterfly is not a threat and leave it alone? A good subject for a research topic! 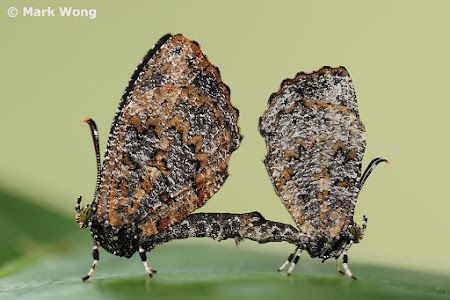 The upperside of the Pale Mottle is a bluish grey with a broad black apical border. The hindwing is brown in the male, but features streaks of grey in the female.  The underside is cryptically marked and mottled with dark brown, buff and light orange striations, giving the butterfly a marbled appearance. 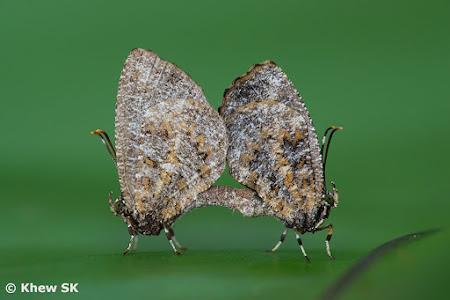 Although most encounters of this butterfly are of individuals fluttering around trees and shrubs, mating pairs of the Pale Mottle are regularly seen - as can be observed by the frequent number of photographs of a pair of the butterfly 'doing their thing'. Mating pairs are usually more docile and perch stationary, making it much easier for a photographer to shoot them. 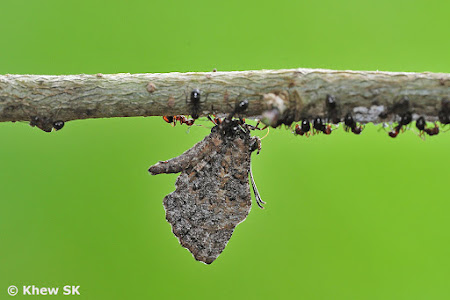 When they locate a colony of ants tending to aphids, mealy bugs or coccids, the Pale Mottle tends to flutter around the plant stem where the ants can be found, often landing right in the midst of the ants and aphids/mealy bugs and then joining the ants that are feeding on the secretions of these insects. At times, a female may lay her eggs beside the aphids/mealy bugs, where, upon hatching, proceed to feed on the other insects! 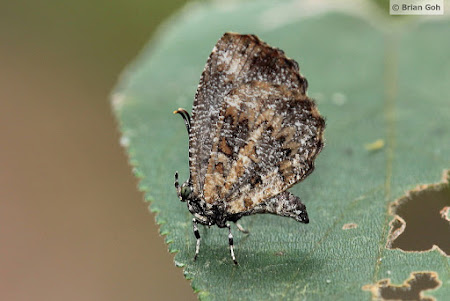 At other times, an individual stops to rest on a leaf tip, making it an easy subject to hunt down and photograph. However, its diminutive size makes it a challenging macro subject to shoot when trying to deal with the shallow depth of field to ensure all parts of the butterfly are in sharp focus. Its preference to rest in deep shade also makes photography in low light conditions necessary. 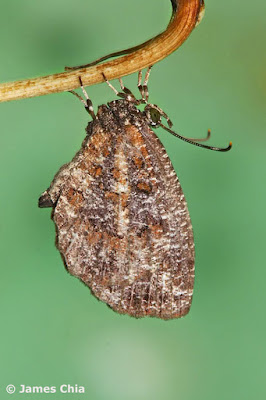 The Pale Mottle features banded legs, black at the joints. antennae are long and curved at the tips. Species in the subfamily are also characterised by prominent palpi, projecting way beyond the head and eyes of the butterfly. Even though the species has six fully-developed legs, individuals usually perch on four legs, and hold their forelegs close to the thorax. Only on rare occasions where an individual is seen perching with all six legs fully extended. 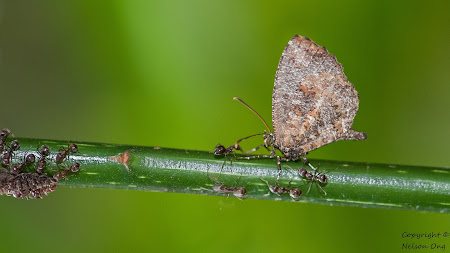 As mentioned earlier, the caterpillars of the Pale Mottle feed on other living creatures like coccids, mealy bugs and aphids, making them carnivores, unlike most caterpillars of Lepidoptera, which largely feed only on plant material.

Posted by Commander at 9:18 PM 0 comments