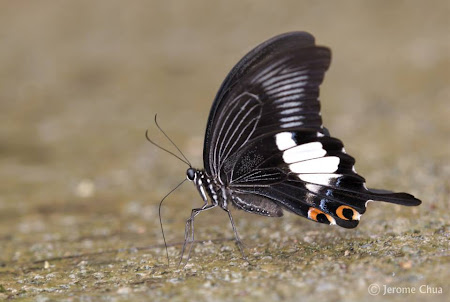 This large swallowtail is one of Singapore's forest-dependent species that is rarely, if ever, found in urban parks and gardens. They are often seen flying erratically amongst the treetops and stopping to feed when Saraca and Syzygium trees are flowering. A large species with a wingspan reaching 140mm in females, the Great Helen is considered moderately rare. Seasonally, sightings of several individuals flying in the same locality have been reported.
This photo is interesting, in that the Great Helen has rarely been photographed puddling in Singapore. Both males and females have always been observed flying amongst the treetops in the forests. Although this species has been seen puddling in Malaysia, this is the first time that anyone has captured evidence that it does puddle locally if conditions are right. This shot was taken by ButterflyCircle member Jerome Chua.
Posted by Commander at 9:40 AM 0 comments