Life History of the Dot-Dash Sergeant 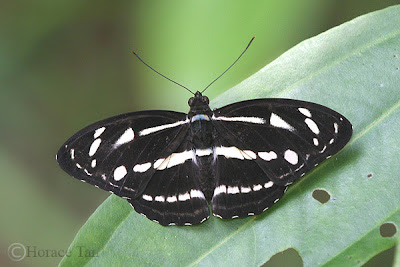 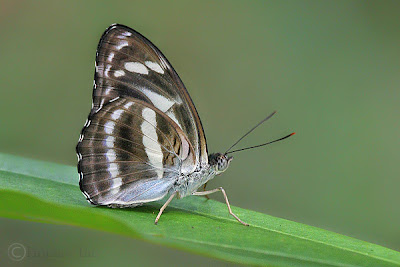 A Dot-Dash Sergeant resting on a perch in the nature reserve, showing us its undersides 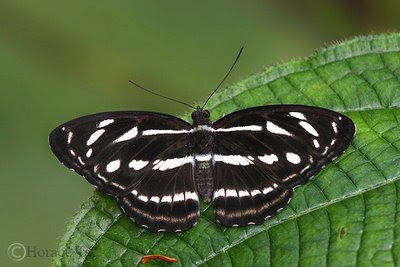 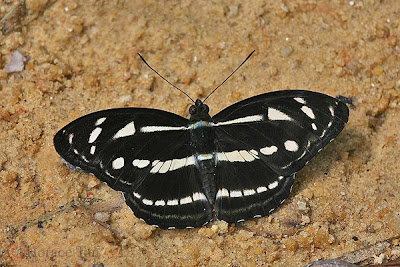 Physical Description of Adult Butterfly:
Above, the Dot-Dash Sergeant is dark brown to black with an interrupted, white, macular and curved fascia running from mid-costa on the forewing to near the base of the dorsum on the hindwing. On the forewing, the white post-discal spot in space 2 is roughly oval and well separated from the spot in space 1b. Usually there is no post-discal spot in space 3. The forewing cell-streak is entire and separated from the triangular spot beyond. There are submarginal lines of white markings irrorated with dark scales on both wings, that on the hindwing taking the form of a broad band running from the apex to dorsum. The underside is greyish brown with markings as on the upperside.

Field Observations of Butterfly Behaviour:
Locally the Dot-Dash Sergeant is uncommon. Sightings of adults have been confined to a few locations in the northern and western part of the Central Catchment Nature Reserves where its host plants, Uncaria spp. are growing. The adults fly with a strong swift flight. Individuals have been seen around flowering trees and puddling on trails within the nature reserves.

Early Stages:
Four species of Uncaria (see attached picture) growing in the nature reserves have been found to be host plants for Dot-Dash Sergeant. Species #3 is suspected to be U. lanosa. Species #4 was previously recorded as the host plant for Lance Sergeant and Commander. Dot-Dash Sergeant shares the same feeding routine and utilization of frass chain/bundles as described therein for these two species. 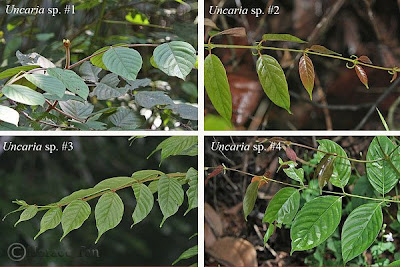 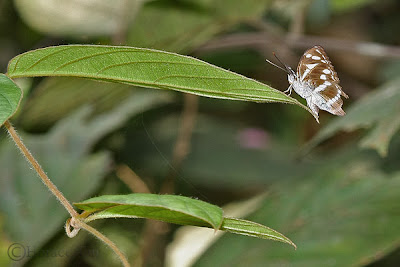 The eggs of the Dot-Dash Sergeant are laid singly at the tip of a leaf on the host plant. In a behavior typical of members of its genus (and some other genera), the mother butterfly first lands on the surface of the leaf, and with its head pointing towards the petiole, it reverses until its abdomen tip reaches the drip tip of the leaf, and there it lays an ovum. The eggs are somewhat globular in shape, with surface marked with hexagonal pits and bearing short spines at pit corners, giving them the appearance of minute sea-urchins. Each egg has a diameter of about 1mm. 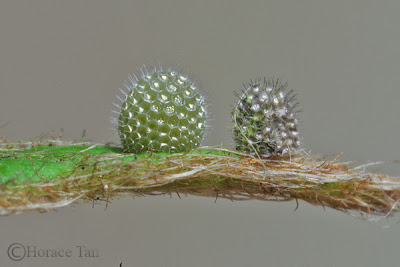 A freshly laid egg of Dot-Dash Sergeant at the leaf tip of Uncaria #1. Diameter: 1mm.
In this case, the mother butterfly laid it next to a failed egg. 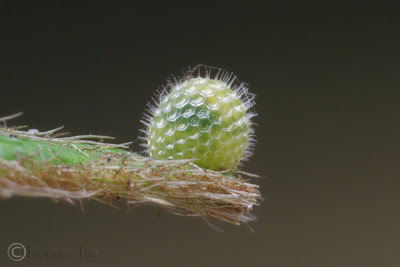 A mature egg with few hours to hatching

The egg takes about 3.5 days to hatch. The young caterpillar emerges by eating away part of the egg shell. After its emergence, it turns around and proceeds to finish up the every bit of the remainng egg shell. The newly hatched has a cylindrical pale greenish body covered with many small tubercles. The head capsule is orange in base color and speckled with dark brown patches. 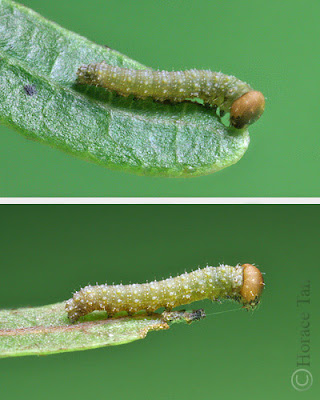 The 1st instar caterpillar feeds from the leaf tip and works its way towards the base on each side of the midrib, which is left protruding. At the tip of this exposed midrib, the young caterpillar also laboriously builds a frass chain which is made up of frass pellets strung together with silk thread. Between feeds, the caterpillar rests on either the exposed midrib or the frass chain. In later instars, the caterpillar tends to rest near where the protruding midrib joins the remaining lamina. At this site, it also attempts to disguise itself with a collection of frass pellets secured with silk on the lamina. After reaching about 5.5mm in about 3 days, the caterpillar moults to the 2nd instar. 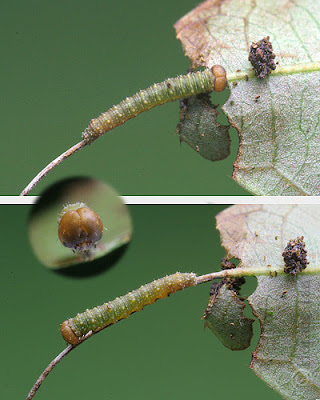 One 1st instar caterpillar resting on the exposed mid-rib near its frass barrier, length: 5mm

The body color of the 2nd instart caterpillar is mainly dark brown decorated with small black patches. Besides tiny tubercles covering most of its body surface, the 2nd instar caterpillar also features short and branched spines dorso-laterally and spiracularly. The head capsule is now mostly dark brown and dotted with a few conical tubercles. This instar lasts about 3 days with the body length reaching 8-8.5mm. 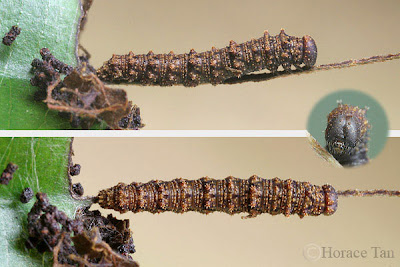 The 3rd instar caterpillar has slightly longer dorsolateral spines, with the pairs on thoracic segments longer than the rest. Its head capsule is dark brown to black irorated with pale brown tubercles. This instar takes 4-5 days to complete with body length reaching about 12mm. 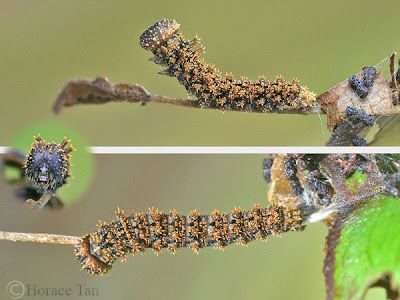 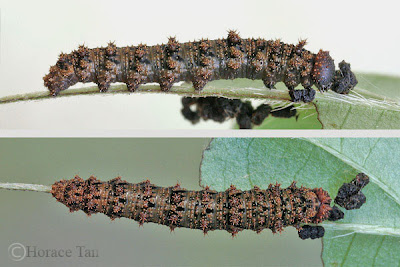 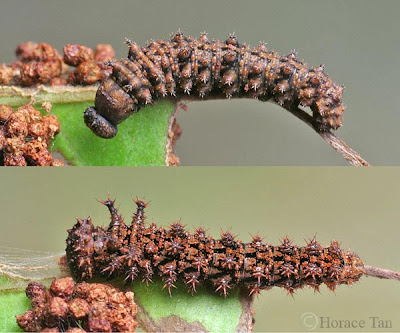 The 4th instar caterpillar has much longer dorsolateral spines which are heavily branched. The body is still brown to dark brown in base color but dotted with rather regular and prominent small black patches on each body segment. Besides conical tubercles, the head capsule also carries some short spines. This instar lasts 4 days with body length reaching about 19mm-20mm. 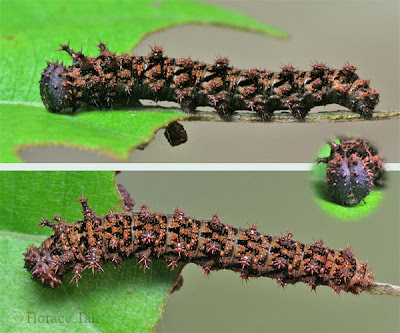 The 5th and final instar brings about a drastic change in appearance. The body surface still has the same regular dark patches set against a light brown base color, but now the branched dorso-lateral spines are very well developed on all body segments with those on the meso- and metathorax being the longest. Newly moulted caterpillar has biege to light brown translucent spines, but these will change to light green and then green as the caterpillar grows. Parts of the body surface will also change from brown to green in tandem. 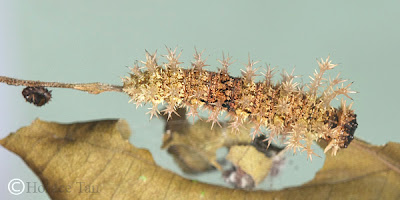 5th instar caterpillar, early in this stage, length: 20mm.
The old 4th instar head capsule can be seen a short distance behind the caterpillar. 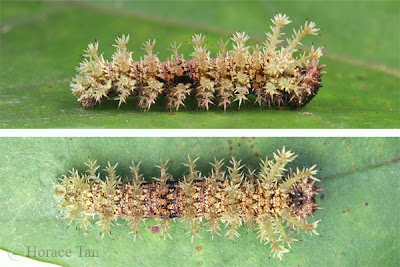 Two views of 5th instar caterpillar, early in this stage, length: 20mm.
There is no prominent saddle mark on the 5th abdominal segment as typical in many Athyma spp. Instead, the dark patches which occur on all body segments are enlarged and more prominent on the 5th abdominal segment. The black to dark brown head capsule has much longer and pointed spines. As with other members of the Limenities subgroup, when disturbed, the caterpillar adopts a characteristic posture with the anterior body arched and the head tucked beneath the thorax. 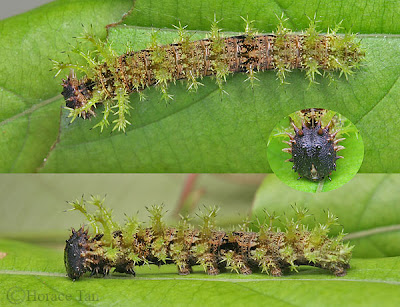 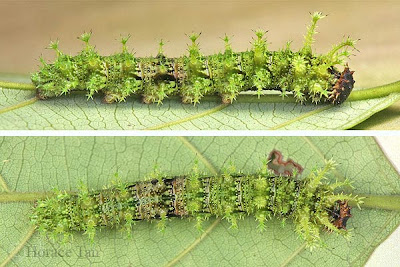 A sequence of a few bites taken by a Dot-Dash Sergeant
The 5th instar lasts for 7-9 days, and the body length reaches up to 35-40mm. On the last day, the color of the body and the spines changes with a gradual change to white with yellowish tinge. The caterpillar ceases feeding and wanders around for almost half a day for a pupating site which is typically a branch or a stem. Once a suitable spot is found, the caterpillar spins a silk pad, and from which it hangs vertically to take on the pre-pupatory pose. For the most part of this immobile pre-pupal phase, the caterpillar adopts a curled-up posture (see pic). When it is within a few hours to pupation, the caterpillar gradually relaxes to a more upright posture, and at this time, waves of contraction starts to ripple from the posterior to the anterior end, until the pupation event kicks in. 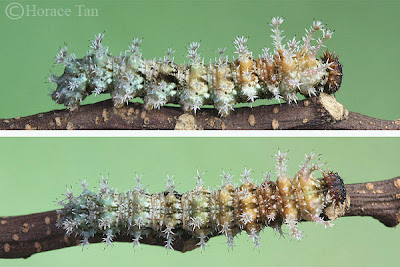 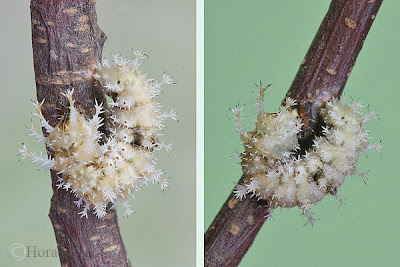 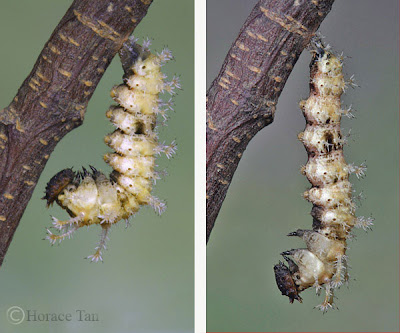 Two vlews of a pre-pupatory larva as it gradually adopts an straightened posture as a
prelude to the pupation event.
Pupation takes place a day later. The pupa suspends itself from the silk pad with no supporting silk girdle. When disturbed, the abdominal segments flex laterally. Fresh from the pupation, it is almost silky white. Within the first one or two hours, certain segments and parts are darkened while the remaining parts will gradually take on a beige-silvery shine in hours ahead. The pupa has a pair of long and slight curved cephalic horns, about 4-5mm. Dorsally, there are two processes curved towards each other, with one larger and dark in color. Length of pupae: 25-30mm (counting the cephalic horns).

A pupation sequence of a Dot-Dash Sergeant 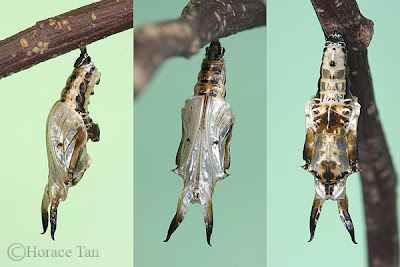 Three views of a pupa of the Dot-Dash Sergeant.
After about 6.5 days of development, the pupa turns black in the wing pad area as the development within the pupal case comes to an end. The spots and streak on the forewing upperside are also discernible. The following day, soon after day break, the adult butterfly emerges from the pupal case.

An eclosion sequence of a Dot-Dash Sergeant 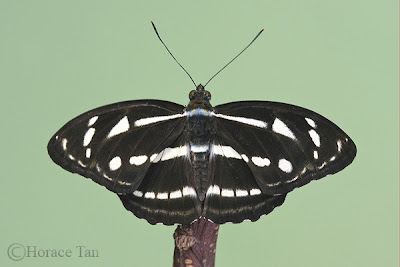 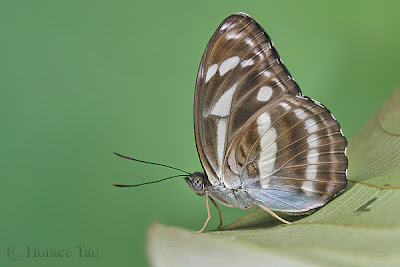 Another newly eclosed Dot-Dash Sergeant, showing us the undersides.

Text and Photos by Horace Tan
Posted by Horace at 9:00 PM 2 comments