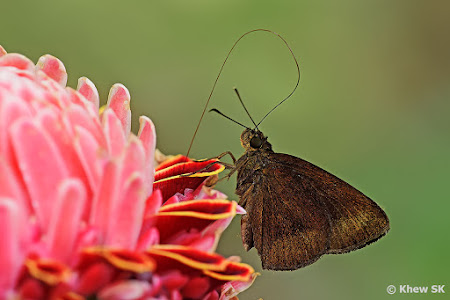 Just into the ninth month of 2018, Chinese communities prepare for the Mid-Autumn or Mooncake Festival towards the end of September. Many Chinese/Asians all over the world - crazy, rich or otherwise, look forward to the sweet treats in the form of mooncakes. Even in early September, I have already had my first taste of mooncakes sold by ever-enterprising retailers who start selling these diabetes-inducing desserts way ahead of the Mooncake Festival. 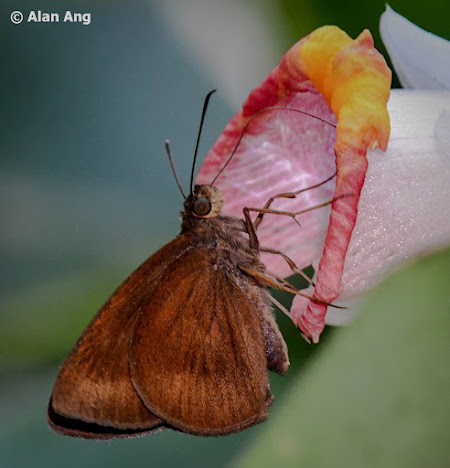 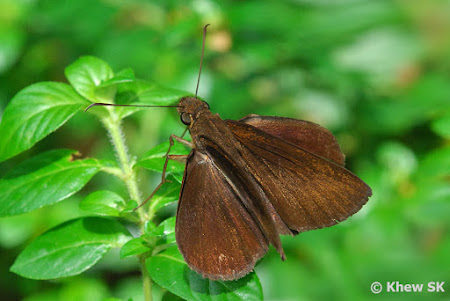 Over in Jakarta and Palembang, the 18th Asian Games drew to a close on 2 Sep, with just over two weeks of competitions amongst the best athletes in Asia. The Games closed without any major hitches or security issues, as Indonesia showed its proficiency and confidence to host a major sports event and could be a contender for the Summer Olympics some time in the future. Little Singapore ended the games in 14th spot (out of 46 participating asian countries) securing 22 medals with 4 golds coming from swimming, sailing and contract bridge. 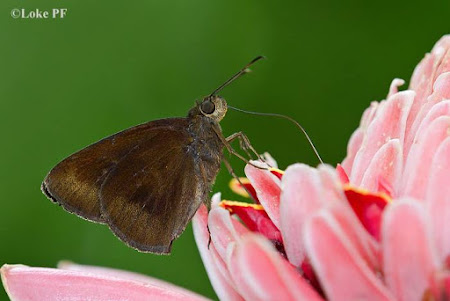 Over in Japan, Mother Nature's wrath came in the form of typhoon Jebi, the strongest winds to hit Japan in 25 years. Before it made landfall, the storm had sustained winds of 140 kilometers per hour and gusts of 165 kmh, the equivalent of a Category 1 Atlantic hurricane. And as the Japanese were recovering from Jebi, a 6.7 magnitude earthquake struck the island of Hokkaido. It is just the latest of a number of natural disasters to hit the country, continuing a summer of chaos that has seen deadly floods, typhoons, earthquakes and heatwaves. Not a good year for Japan. 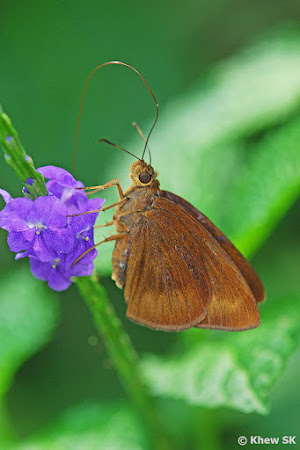 A Chocolate Demon feeding on the flower of the Snakeweed

Back home in quiet, 'boring' but safe Singapore, the government had to settle for a deferment of the High Speed Rail (HSR) project that was originally touted to start operations in 2026. However, the deferment would mean that if the project will eventually happen, it would only start running in 2031. The new Malaysian government has also thrown a number of controversial bilateral proposals our way, one of which stirred the environmentalists' hornet's nest. The proposal of a 3rd terrestrial link via Pulau Ubin irked the nature community. Let us hope that this is just another 'distraction' thrown our way to mask the 'real' agenda that is yet to come. 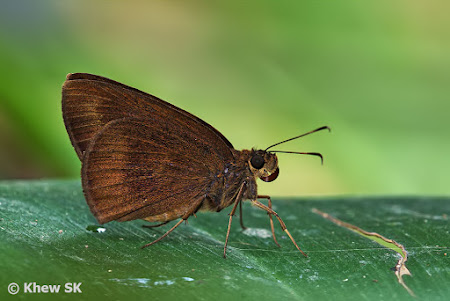 Let us turn to our Butterfly of the Month for September 2018. In our butterfly world, not every species is endowed with awe-inspiring beauty, colour, size or shape. Some butterfly species can appear drab and uninteresting to many observers. Our feature butterfly this month is one of them - the Chocolate Demon (Ancistroides nigrita maura). 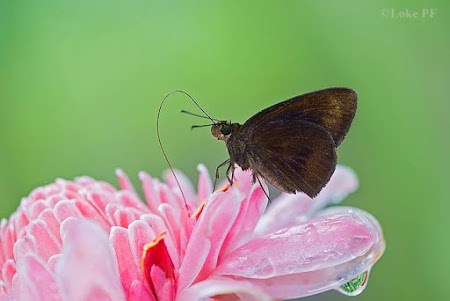 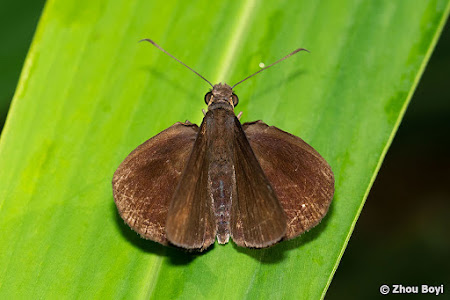 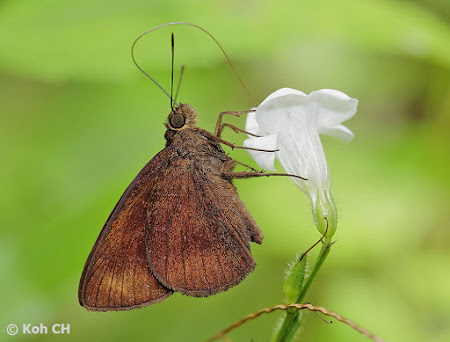 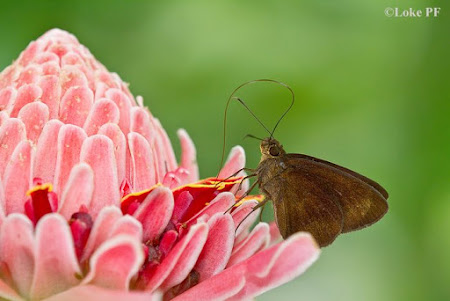 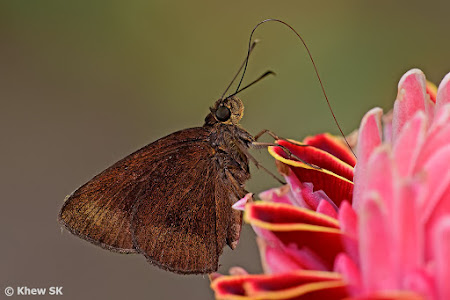 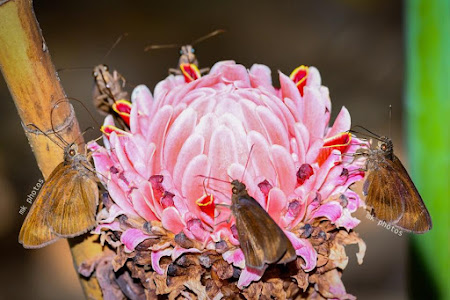 The Chocolate Demon butterflies are often found in the vicinity of its host plant, the Torch Ginger.  They feed on the flower of this ginger, and sometimes many individuals are seen feeding together  How many Chocolate Demons can you count in the last photo?

It is a large skipper of the Hesperiidae family, and flies with an erratic and hopping flight amongst low shrubbery. It can often be observed to be feeding on various nectaring plants, and stops with its wings half-opened in a typical Hesperiidae fashion. Adults are also regularly seen in the vicinity of Torch Ginger groves, feeding on the large pink flowers of the plant. Sometimes up to half a dozen individuals can be seen together. 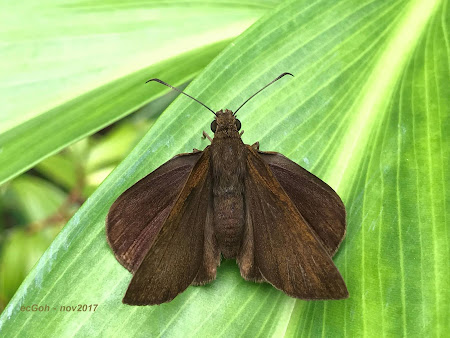 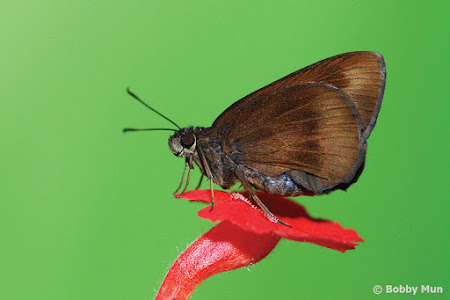 The Chocolate Demon is dark chocolate brown on the upperside and unmarked. On the underside, the marginal areas of both wings appear paler than the ground colour. A remarkable feature of this species is the extreme length of its proboscis, with which it uses to probe deep into flowers for nectar. The proboscis is more than twice as long as the butterfly's body. 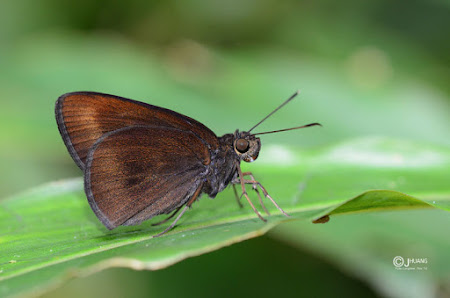 Besides feeding on flowers for nectar, the Chocolate Demon can sometimes be seen to feed on bird droppings and other animal excretions, although it is rarely seen to puddle at damp forest paths. It can be skittish at times and sometimes 'jump' at the flash when photographed. 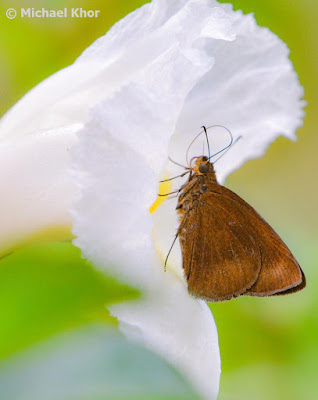 Posted by Commander at 9:33 PM 0 comments