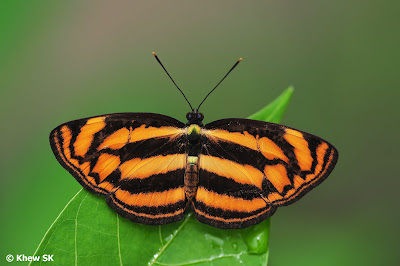 A Malayan Lascar perches on a leaf after a shower
The Lascar butterflies belong to a group of species under the sub-family Limetidinae of the family Nymphalidae. These Lascars were probably so named after an Indian sailor, army servant, or artilleryman. An excerpt from Wikipedia reads "The British East India Company recruited seamen from areas around its factories in Bengal, Assam and Gujarat, as well as from Yemen, British Somaliland and Portuguese Goa. They were known by the British as lascars. These seamen included Indian sailors, who would go on to serve on British until the 1960s." 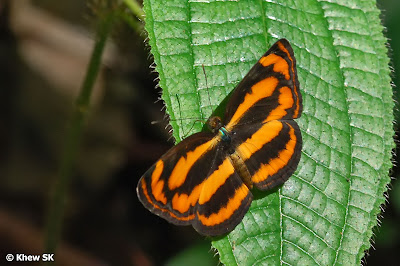 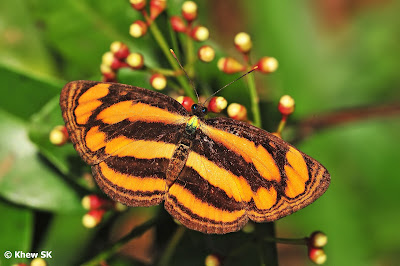 A Perak Lascar feeding on the flowers of a Syzygium tree
In our butterfly world, the Lascars are butterflies that are orange-and-black banded. They are generally small butterflies with wingspans usually not exceeding 50mm. They have a weak flap-glide-flap flight, usually flying amongst low shrubbery, but can quickly take off to the treetops when alarmed. There are currently four different species of Lascars in Singapore, although there is a strong likelihood of a fifth species due to the difficulty of separating them from field shots. 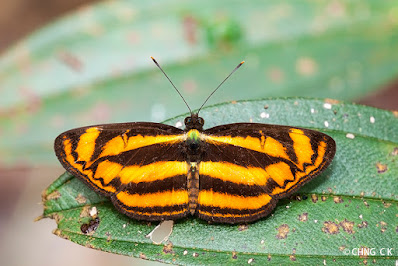 A Burmese Lascar perched on the leaf of a Singapore Rhododendron
The typical Lascar is alert and skittish, and when in flight, not easy to distinguish amongst the different species. They are usually found in forested habitats, although they are widely distributed across Singapore. One of the species is often associated with back-mangrove habitats due to its host plant being found in such areas.
1. The Malayan Lascar (Lasippa tiga siaka) 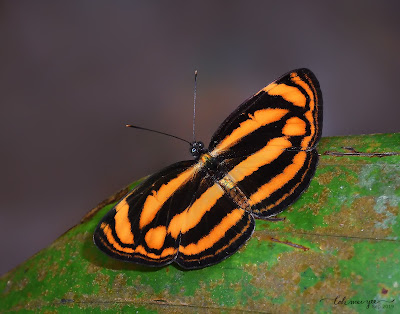 The Malayan Lascar is probably the most common and widely distributed of the four species in Singapore. It can be observed at parks and gardens like the Southern Ridges, Botanic Gardens although it is mainly spotted in forested areas around the fringes of, and within the nature reserves. 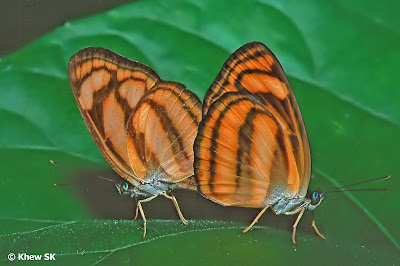 A mating pair of Malayan Lascars 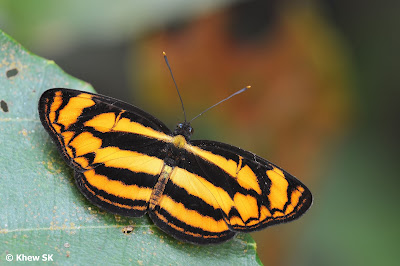 The wings are typically banded with black and orange, with the underside a paler colour. The species can be distinguished from the similar-looking Burmese Lascar by the submarginal spot in space 3, which is wider than the adjacent spots in spaces 2 and 4. It has been bred on the caterpillar host plants Erycibe tomentosa and Bauhinia semibifida.
2. The Burmese Lascar (Lasippa heliodore dorelia) 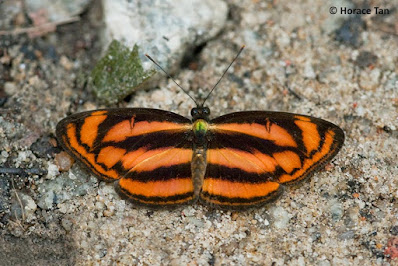 A Burmese Lascar puddling at a damp footpath
The Burmese Lascar is rarer than its lookalike cousin, the Malayan Lascar. It is a forest-dependent species that does not fly far from the nature reserves of Singapore. It is sometimes observed seen puddling at damp sandy footpaths in the nature reserves. It has been successfully bred on its caterpillar host plants of Rourea minor, Rourea asplenifolia and Cnestis palala. 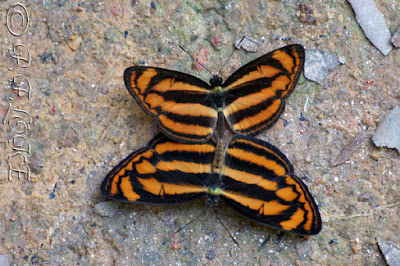 A mating pair of Burmese Lascars 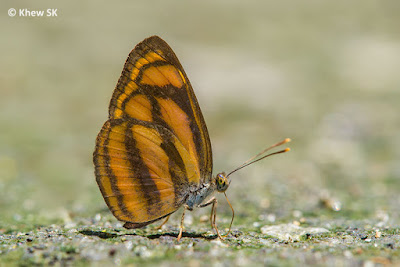 The Burmese Lascar features the typical orange/black banded appearance of the Lascars, with the underside a paler orange-yellow with dark grey bands. The primary distinguishing characteristic of this species that separates it from the very similar-looking Malayan Lascar is the submarginal spot in space 3, which is barely wider than the adjacent spots in spaces 2 and 4.
3. The Perak Lascar (Pantoporia paraka paraka) 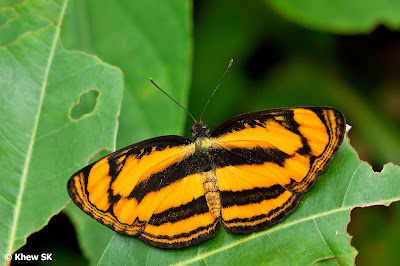 A Perak Lascar perched on a leaf to sunbathe
The Perak Lascar is more frequently encountered in back-mangrove and mangrove habitats where its preferred host plants, Dalbergia rostrata and Dalbergia candenatensis are found. Its third caterpillar host plant, Cnestis palala which it shares with the Burmese Lascar, grows mainly in the forested nature reserves, where the Perak Lascar is sometimes also found. In Singapore, it is often observed in the vicinity of mangrove habitats in Pulau Ubin, Kranji, Sg Buloh Wetlands and Pasir Ris Park. 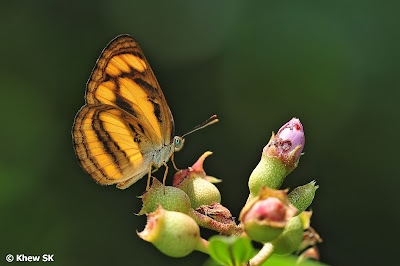 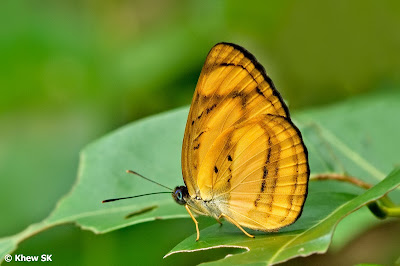 The Perak Lascar has the typical orange/black banded appearance, with the underside a paler colour. The diagnostic identification characteristic of this species are two orange submarginal lines on the forewing above, with one or both bent at space 3. Together with the marginal orange spots that appear like a third thin line, giving the appearance of three orange lines, the Perak Lascar is easy to identify and when it stops to rest, cannot be mistaken for any of the other Lascar species in Singapore.
4. The Common Lascar (Pantoporia hordonia hordonia) 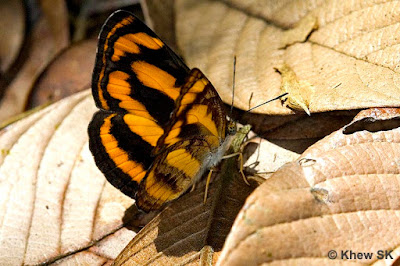 A Common Lascar forages amongst leaf litter
The fourth Lascar found in Singapore is the Common Lascar, which frequents the forested nature reserves in Singapore. Both its caterpillar host plants are forest plants - Archidendron clypearia and Parkia speciosa. The last-named host plant is also called "Petai" and is a bean that is consumed in traditional Malay cuisine. 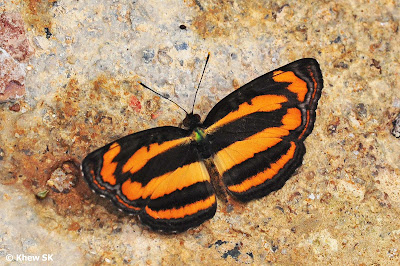 A Common Lascar puddling at a damp footpath 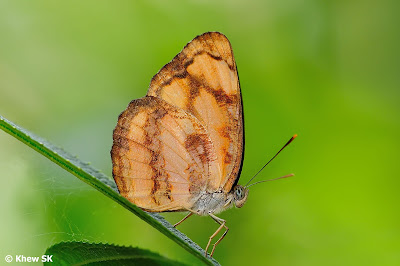 A Common Lascar showing its marbled undersides
The Common Lascar also has the orange/black banded appearance, but if the underside of this species can be seen, the marbled underside will set it apart from the other three species described above. On the upperside, there is a single thick orange sub-marginal line, with a inner pale grey line. 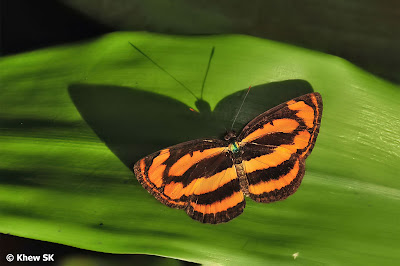 A possible Broad-Striped Lascar, a species that is very similar to the Common Lascar
However, it is this species that can be easily confused with the Broad-Striped Lascar (Pantoporia sandaka sandaka), which has a very similar appearance except in that the orange sub-marginal line is thicker than the inner pale grey line. In the Common Lascar, the pale grey line is thicker than the orange submarginal line. However, in view of the difficulty of separating them definitively, the existence of Pantoporia sandaka is tentatively held in abeyance until physical specimens or DNA analysis can be made available for validation. 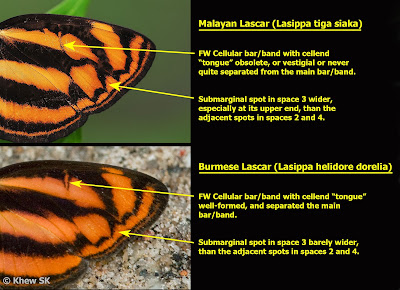 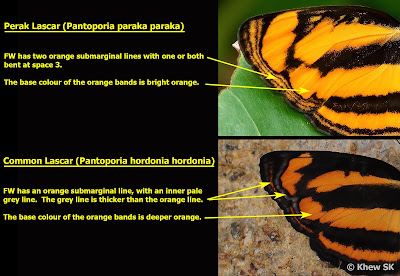 ID Keys to the 4 Lascars
There are two other similar-looking species that were recorded in Singapore by the early authors - The Grey Lined Lascar (Pantoporia dindinga) and the Baby Lascar (Pantoporia aurelia) but these have not been seen in recent years or could have been missed. Hence if any observers and butterfly watchers out there who spot these Lascars, do try to take a good photo of these species, as they may still be extant in Singapore after all!
Text by Khew SK : Photos by Chng CK, Khew SK, Loh MY, Loke PF and Horace Tan