Life History of the Centaur Oakblue 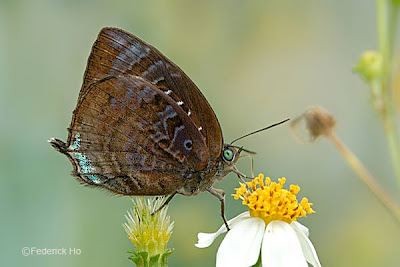 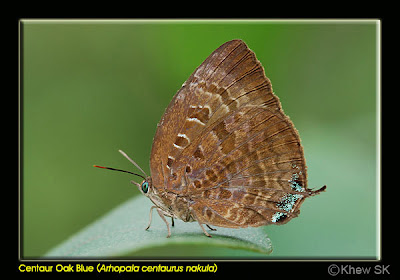 A Centaur Oakblue on a leaf perch 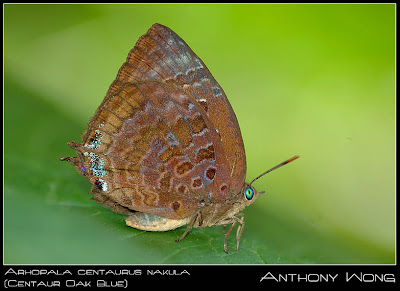 Another Centaur Oakblue on a leaf perch

Physical Description of Adult Butterfly:
This species is one of the largest within the Arhopala genus. Both sexes have more pointed forewing apex than usual. Hindwing cell is short, being less than half the wing length. A stout white-tipped tail is present at the end of vein 2 on the hindwing. Above, the male is purplish blue with a very narrow, thread-like dark border on the forewing while the female is paler purplish blue with broader black borders. Underneath, both sexes are brown with markings in darker brown and outlined with lines in paler brown. A purplish sheen can be observed on fresh specimens. A feature which immediately distinguishes this species from other Arhopala spp. locally is the presence of green silvery lines outlining spots in the forewing cell (refer to the area highlighted by a flashing red border in the picture below). The post-discal band on the forewing is continuous and a spot is present in space 10.

Another Centaur Oakblue to take off from a cement surface of a park bench. 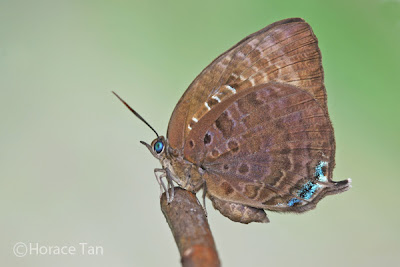 A Centaur Oakblue perching on a branch.

Field Observations of Butterfly Behaviour:
This species is not uncommon in Singapore. Adults have been sighted in multiple habitats both in and out of the nature reserves, at places such as neighborhood gardens, hill parks, mangrove areas and off-shore islands. Usually they are sighted perching on leaves in the vicinity of their host plants, but the adults have also been observed to visit flowers (see the blog article at this link for related information on this behavior). 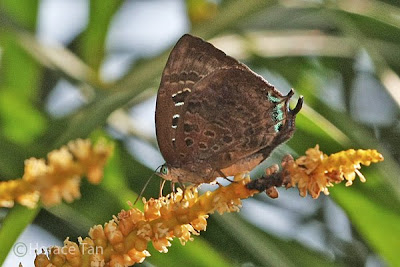 A Centaur Oakblue taking nectar from a palm inflorescence. 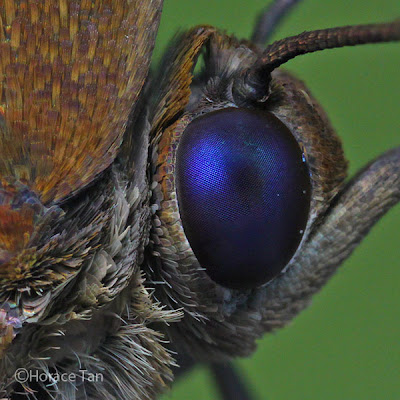 A close-up view of the eye of a Centaur Oakblue.

Early Stages:
The Centaur Oakblue is polyphagous as its early stages feed on a number of host plants from different families, including one parasitic plant, Macrosolen cochinchinensis. The caterpillars feed on the young to middle-aged leaves of the hosts, and typically build shallow shelters on the leaf. Between feeds, and when threatened, the caterpillars retreat to these shelters. The caterpillars also have a symbiotic relationship with ants, in particular the 'Weaver Ant' or Kerengga (Oecophylla smaragdina). 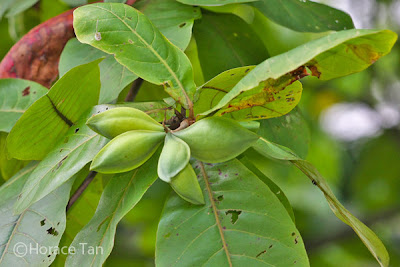 The eggs are laid singly and sometimes in small groups on young shoots of the host plant. Each egg is about 1.0-1.1mm in diameter, white in color with a greenish tinge when freshly laid. It is circular with a depressed micropylar at the pole, a finely reticulated pattern of intersecting ridges on the surface, and pointed spines at intersections of these ridges. 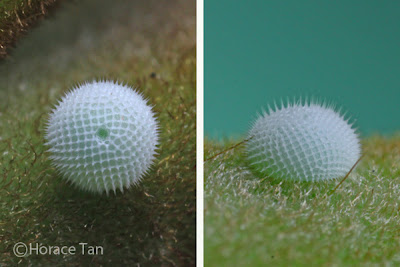 Two views of an egg of the Centaur Oakblue
It takes 2.5-3 days for the egg to hatch. The newly hatched has a length of about 1.8-1.9mm and has a yellowish green coloration. It has a rather flattened woodlouse appearance with a large semicircular pro-thorax and a pale orangy head. This appearance remains in later instars. The body also carries long dorso-lateral and lateral setae (hair). A dark reddish marking can be seen on the dorsum of the 7th abdominal segment. As it grows, the body color becomes more yellowish and a dorsal band reddish in color appears on the last few abdominal segments.

A time-lapse sequence of the hatching event of a Centaur Oakblue caterpillar. 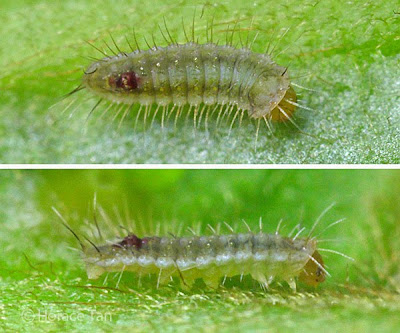 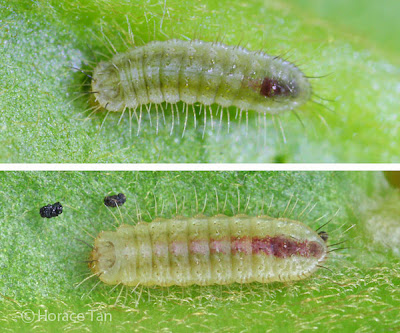 After 1.5-2 days of growth in the first instar, and reaching a length of about 3mm, the caterpillar moults to the next instar. The 2nd instar caterpillar has long fine lateral setae and numerous very short and fine hairs all over the body surface. It is mostly yellowish green except for the reddish band on the dorsum on the last half of the abdominal segments. Even at this early stage, the dorsal nectary organ and tentacular organs are discernible on the 7th and 8th abdominal segments respectively. 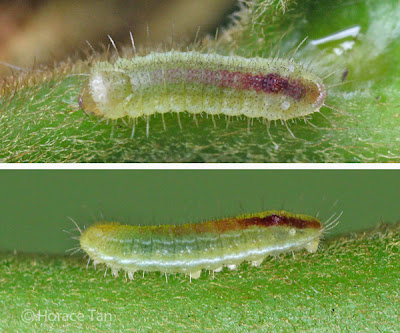 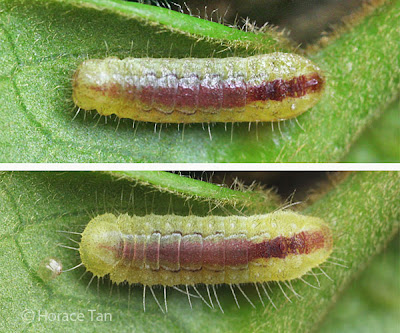 The 2nd instar caterpillar reaches a length of about 5.5mm, and after about 2 days in this stage, it moults again. The 3rd instar caterpillar is prominently marked with a rather broad dorsal band, reddish brown at the posterior segments but becoming more greenish and diffused as it extends and tapering toward the prothorax. From the 2nd thoracic segment to the 6th abdominal segment, the dorsal band is highlighted by a series of convex and dark line segments. The 3rd instar takes about 2-2.5 days to complete with the body length reaching about 9.5mm. 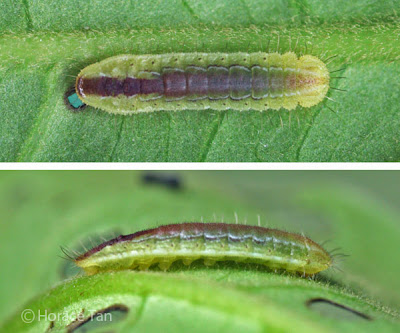 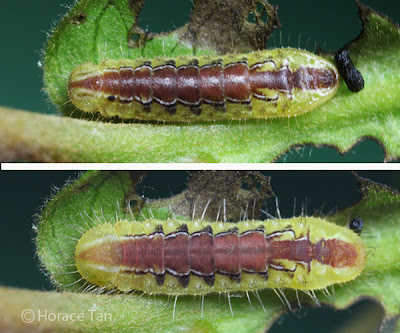 Top: a late 3rd instar caterpillar moments before its moult, length:9mm
Bottom: the same caterpillar soon after its moult to the 4 instar, length: 10mm.

The 4th instar ushers in further "enhancements" to the dorsal band. Now the band is made more prominent by narrow white areas appearing on the inner side of the dark outlines. From the 1st to the 6th abdominal segment, these convex dark lines also have a large lateral brown patch on each side. The patches become larger as the caterpillars grows in this instar. The dorsal band on the 6th abdominal segment is much narrower, allowing for a greater extent of body base colour between the band and the dark outlines. The dorsal nectary organ on the 7th abdominal segment is clearly marked and is flanked by narrow protruding brown markings. On the prothorax, a U-shaped brown marking nearly encircles the tapering end of the dorsal band. The spiracles are dark brown in color, standing out against the yellowish green base color of the body. Towards the end of this instar, the spiracles become encircled in orangy brown rings.The 4th instar takes about 2.5-3 days to complete with the body length reaching 20mm. 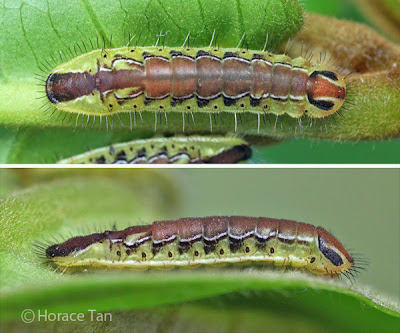 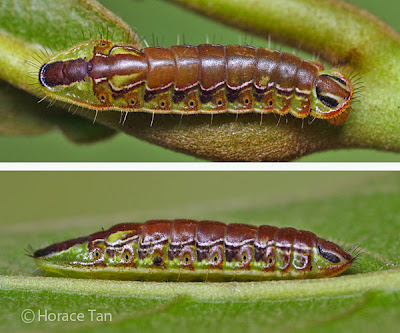 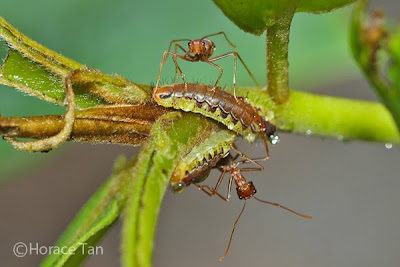 Two 4th instar caterpillars being attended by weaver ants in the field.

The 5th instar caterpillar has similar but more striking markings. Visible changes are 1) dark patches appear within the dark outlines of the dorsal band, thus leading to the appearance of an inner dorsal band; 2) each tentacular organ is highlighted in a black ring which is also connected to the main dorsal band; 3) lateral dark patches reaches all the way to the spiracles and nearly fill up the space between spiracles. 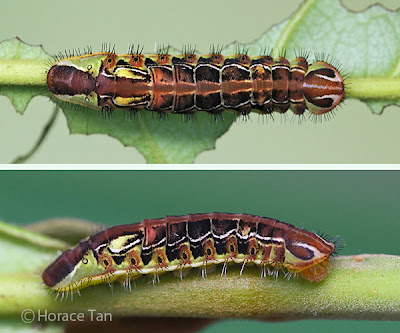 Two views of a 5th instar caterpillar, early in this stage, length:: 20.5mm 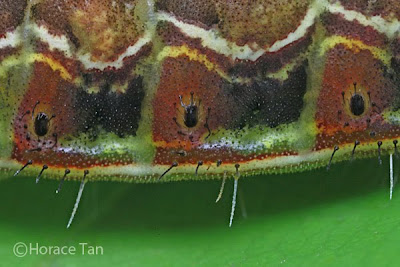 Close-up view of the body markings near the spiracles. 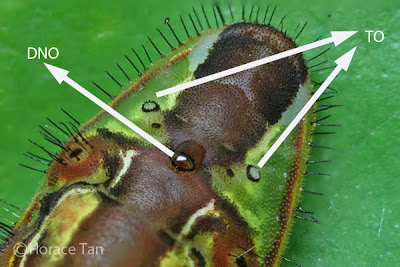 Close-up views of the posterior end of a 5th instar caterpillar, showing the location of the dorsal nectary organ (DNO) and tentacular organs (TO).After 5-6 days of feeding and reaching a length of about 31-32mm, the caterpillar slows down and actually stops food intake for about 1 day. During this time, its body length gradually shortened. Soon it becomes an immobile pre-pupa in its shallow leaf shelter. 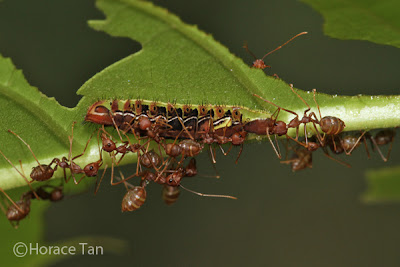 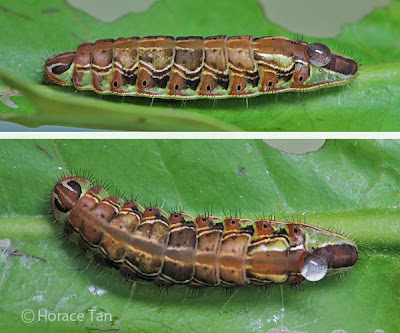 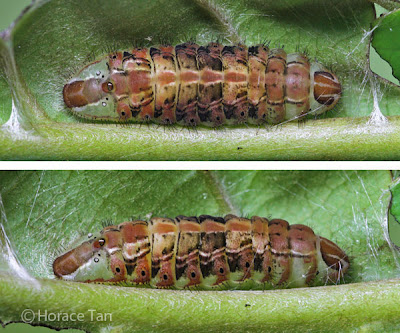 Two views of a pre-pupa of the Centaur Oakblue lying (immobile) within its pupation shelter. 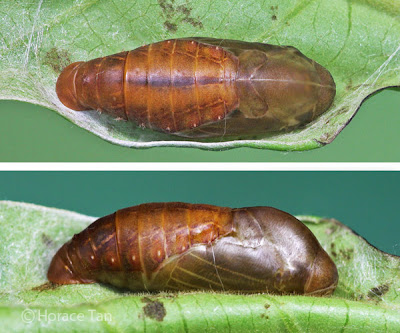 Two views of a pupa of the Centaur Oakblue.Even at the pupal stage, at least for the initial few days of this stage, a little slit on the dorsum of the 7th abdominal segment has been found to exude fluid droplets. This is likely the remnant or continuation of the dorsal nectary organ of the larval stage. It is no surprise that ants have been seen actively attending to the pupa during field observations. Thus the symbiotic relationship between the two species continues into the larval stage of the Centaur Oakblue. 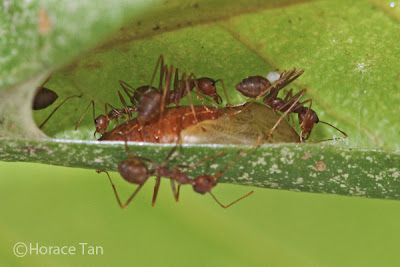 A pupa of the Centaur Oakblue being attended by weaver ants. 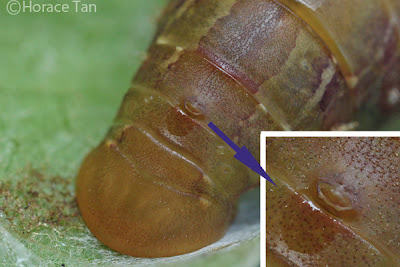 Close-up views of the posterior end of a pupa, showing the remnant of the dorsal nectary organ still exuding fluid.

Nine to ten days later, the pupa turns rather dark, first in the wing pad and thorax, then progressively in the abdomen. The extent of the blue patches in the wing pads gives an early indication of the gender of the soon-to-emerge adult. The next day, the pupal stage comes to an end with the emergence of the adult butterfly. 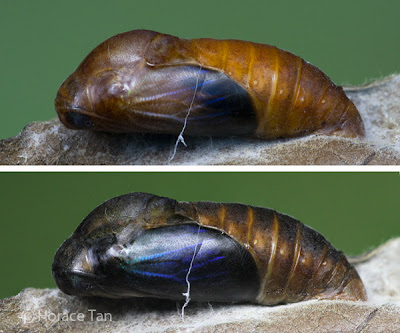 Two views of a mature pupa of the Centaur Oakblue. 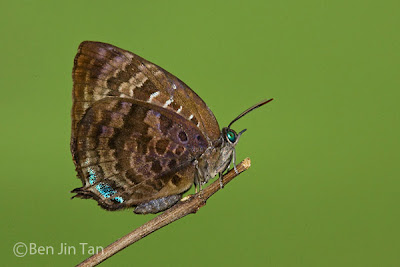