On a bloodthirsty hunt for almost mythic dragons* and Rajahs*, I piggy-backed onto the Chirs’ family horse (Toyota sedan) and galloped at full speed for Gopeng, all decked out in shiny Canon gear.

Gopeng is a town located in Mukim Teja, District of Kampar, Perak, Malaysia. The old town once famous for gold and tin mining is located on the west side of the North-South Expressway stretch of Tapah-Simpang Pulai. Gentle giants of limestone hills and the Titiwangsa Mountains shrouded in mist are visible from the expressway, making the view of the Tapah-Gopeng stretch one of the most picturesque areas on the west side of Peninsular Malaysia. 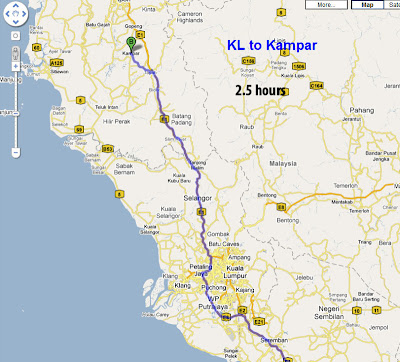 The River Of Kings (Kuala Woh)

After 5 hours of Sunny-style speed, we arrived at Kuala Woh (pronounced colloquially: Koala Whoa!) where shortly after tripping down the stone steps, Canon shaking with anticipation, we came in contact with not one, not two but a full battalion of Rajah Brooke Birdwings. 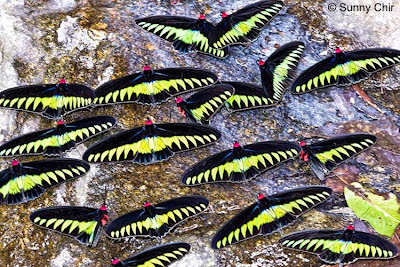 Rajah Brooke's Birdwings are distasteful to predators and are brazenly coloured in magnificent green, black and red. They fly with a majestic, nonchalant rhythm across the sparkling river in full view of birds and puddle in numbers on the bare exposed ground like a hungry skink’s wet dream. 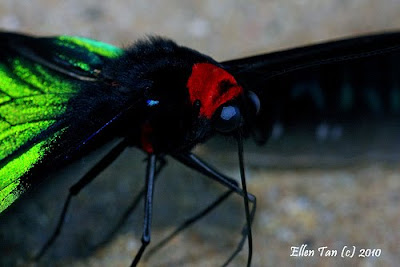 The young of these regal Kings of butterflies feed on Aristolochia foveolata which contain the toxic aristolochic acid. The poison is retained in the young of these princes into adulthood. It was observed that this sub-species albescens is not the same as the subspecies trogon encountered in Endau Rompin. 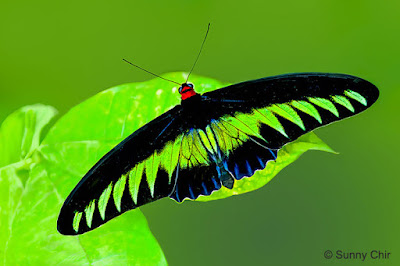 Kuala Woh is a recreation area which hugs the Batang Padang River. Amongst the huge rocks that encrust the sides of the river, wafting steam wavers over the gentle water in the sunlight from seeping hot springs on the river banks. 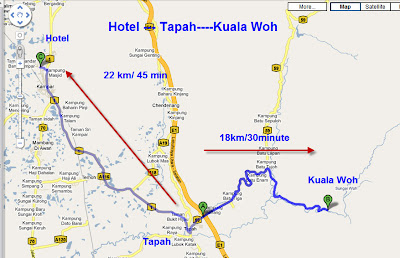 Attracted to the minerals in the hot springs and little feet impervious to the heat, other butterflies gather in a mysteriously exclusive group (away from the large Rajahs) like the lesser peasants in a kingdom of sand and stone.

This motley crowd consisted of a variety of species shown below, of which a particular butterfly stood out in a remarkable spatter of green jewels. Like ladies-in-waiting, the Lemon emigrants hem the Spotted Jay from view and all attempts on capturing and isolating the Jay’s beauty in the hot bare sand were in vain. 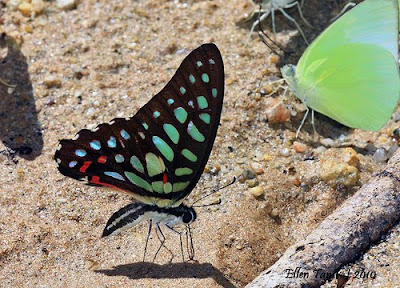 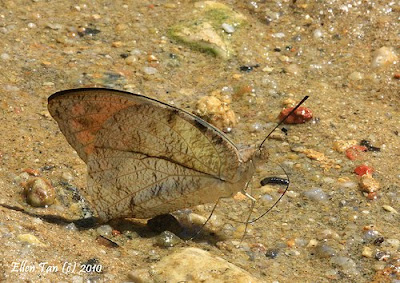 Early the next morning, I rode on the open back of a 4WD through a peaceful little Orang Asli village to the Rafflesia trek near Adeline rumah rehat, a hideaway in Kampung Geruntum near Sungai ltek, just 7 Km from the Perak town of Gopeng. 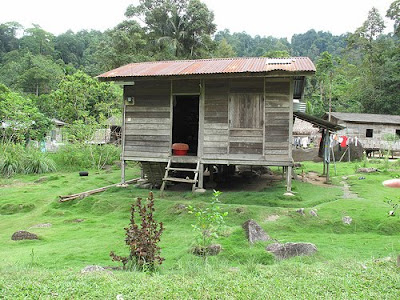 In the midst of worrying about the camera falling into the streams while navigating slippery rocks and attempting to climb up faster than the leeches can slinky themselves onto my shoes, the Orang Asli guide spotted a rare Malayan Jungle Glory and Sunny’s sharp eyes caught the glimpse of a Dark evening brown lurking in the leech-infested shadows. I didn’t spot anything, except for about 30 leeches of different shapes, lengths and sizes. 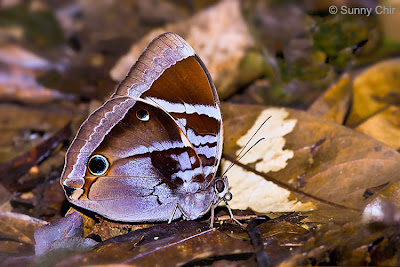 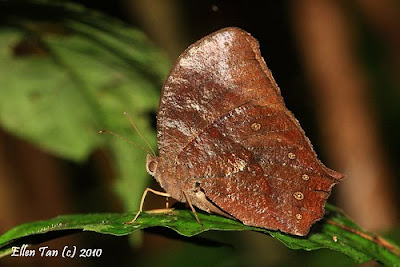 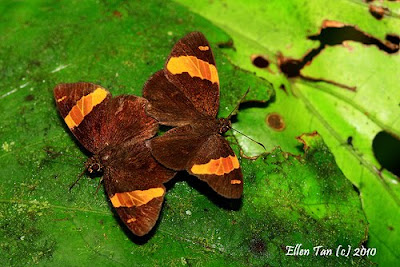 Andrew, a UK-educated Iban from Sarawak with trunks for legs and a handshake that breaks wrists, explained while hopping uncharacteristically (of most stocky heavily muscled men) across rocks and streams that the Rafflesia flower which grew in these parts did not have the pungent smell of those found in other parts of Malaysia. 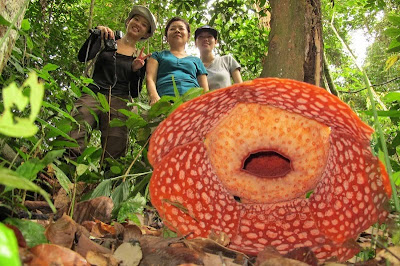 The Rafflesia, known locally as Bungka Pakma, literally translated as Flower Lotus, is used by women to shrink the womb and regain their figure after childbirth. The flower feeds on flies and other insects and is carnivorous. The thick petals of the flower are smooth and waxy to the touch. 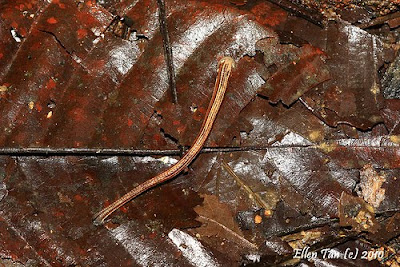 For all the knowledge that certain leeches have great medicinal value, Tiger leeches cause considerable pain and itching when bitten. Compassionate? *sppprraaayyy*

We were visibly disappointed when we finally hurled ourselves up the 70 degree incline to see the sole Rafflesia flower at the foot of a tree looking despondently in a 70 degree incline towards the ground. Andrew’s muscles hopped overtime over the top of the hill to find a more cooperative impressive flower but found none. 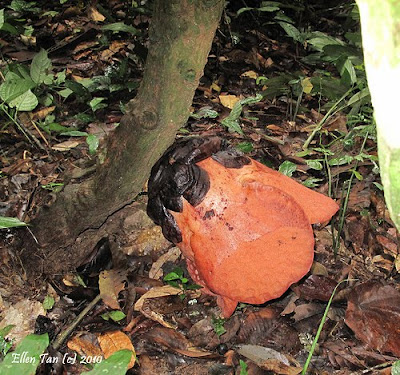 The Rafflesia flower is parasitic and takes 9 months to bloom, beginning from a marble sized bud on the ground or host tree and lives for only a few days. Chances of seeing a blooming Rafflesia is almost like Russian roulette. You never know what you are going to get after a long hopeful hike up so every bloom is precious.

Not to be undone (and not waiting for the leeches to slinky hither), I stuck my G10 in front of the despondent flower and came out with a result that was much better than I had anticipated. 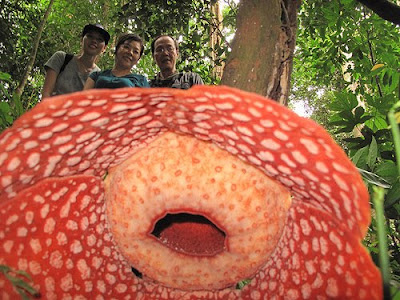 Our fun posing behind the Rafflesia didn’t last long as the rubber slinkies soon found us and before I knew it, I was almost abseiling downwards screaming at the desperate slinkies trailing after.

As a parting shot on behalf of his rubber slinky friends of Nature, Andrew said: “For all that screaming, it doesn’t look like you got bitten much at all.” And ironically, it was the quiet princess of the Chir family that was bitten by two leeches instead.

The second last leg of our adventure consisted of the trails around and along the Sungai Gua Tempurong, a underground river which runs through one of Gopeng’s most popular limestone caves.

Gua Tempurong is one of the longest caves in Peninsula Malaysia and runs 1.6km in the heart of a large limestone hill. 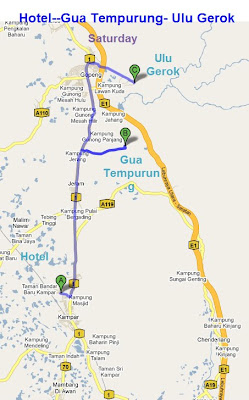 For all the activities which are listed as attractions in Gua Tempurong, the area along the river which flows out from the mountainside and along the foot of the mountain like a moat is an urban family park, complete with facilities, amenities and potted plants.

Around this unexpected setting, many species of butterflies were found fluttering around potted flowers, and urban flora: 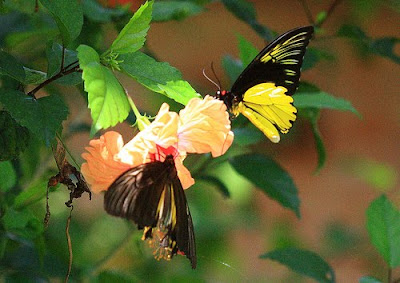 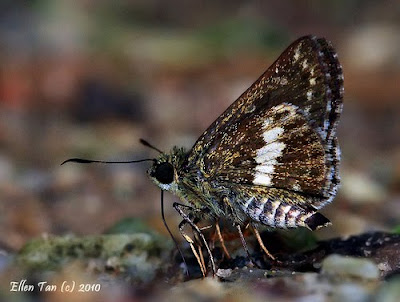 The wide expanse of road leading to Gua Tempurong is pocked with many tempting trails going into the bush. Short explorations here revealed breathtaking scenery and a number of grass species like the Lemon Pansy (Junonia lemonias lemonias) 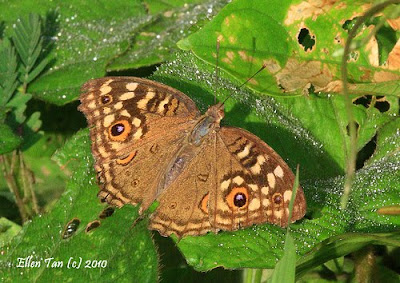 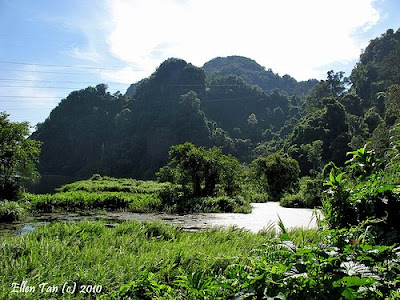 The main attraction at Gua Tempurong (for butterfly enthusiasts) lies just at the mouth of the cave where the underground river meets the daylight and flows into a moat around the foot of the hill.

Just as the sun peeks over the top of the hill, Great Marquis began to float from the treetops onto the sand banks, chasing each other and watching passersby curiously like children at play. 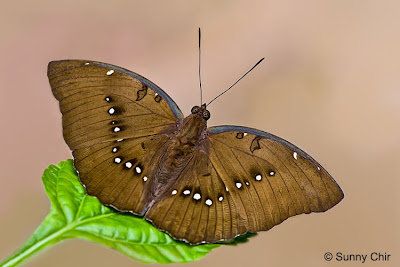 And then the dragons began to descend upon us. Tiny, ribbon-like, frail little white dragontails hovering like bees over the banks. At first one, then two, and then many more, quivering their short little wings and very long tails rapidly like the flirtatious eyelash.

White Dragontails at Gua Tempurong, Gopeng
The timing for sighting this species is uncannily impeccable. They are like tiny fluttering timepieces. Any earlier or later and you would not get to see these dragons at all. 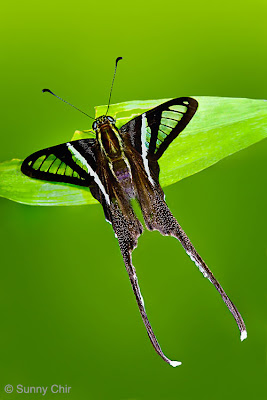 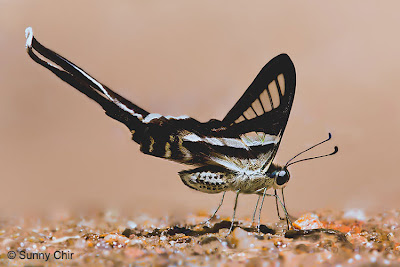 Our last adventure ended in Lata Kinjang ( literally translated: “cascading falls”), a large waterfall near Chenderiang which can be visibly seen from the expressway. The area is a popular family hangout on weekends and it was thronged with people. 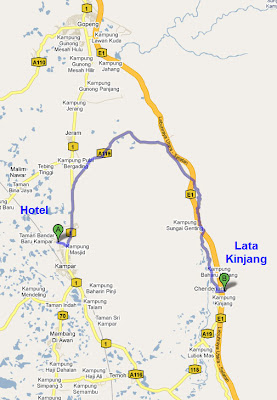 Trailing secretly away from the waterfall, obscured by vegetation and eroded bridges and mudbanks, we found footpaths leading to neighbouring Orang Asli villages and up to abandoned houses and huts further up the waterfall.

Here we sighted two different subspecies of the Autumn Leaf, Flats and a variety of damselflies. 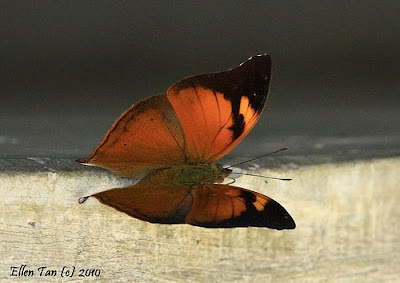 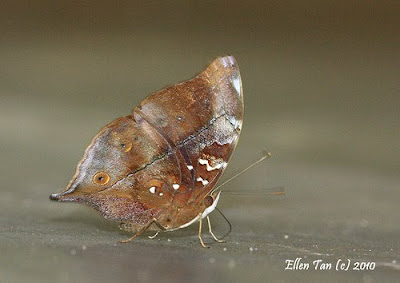 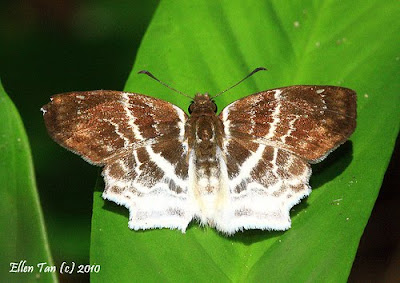 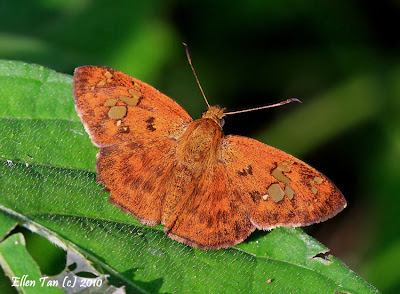 With the spirit for adventure temporarily satiated, batteries running on empty and a pair of 2 year old shoes which had worn themselves away, we stopped by Kuala Woh again, where, we watched the river gently flow under the hypnotic wingbeat of the large Kings flying overhead, before returning back to our individual urban realities.
Text by Ellen Tan : Photos and Videos by Ellen Tan ; Photos by Sunny Chir
Posted by Commander at 11:48 PM 1 comments