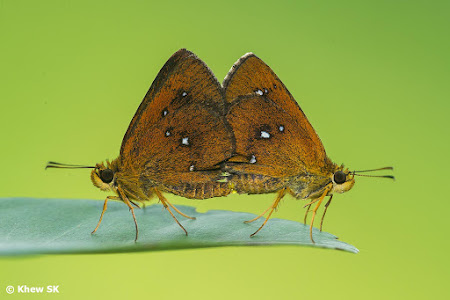 This weekend's blogpost looks at a number of butterflies from the Hesperiidae family that have been given the English common name of "Bob". Common names of butterflies have always been intriguing in that it is hard to say for sure what were the thoughts of the early authors who coined these names for the butterflies. 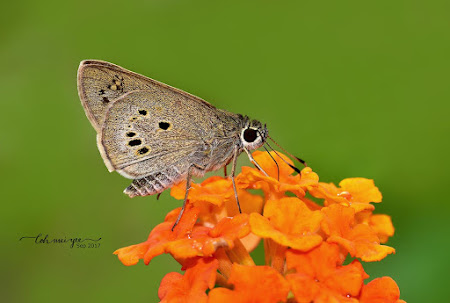 Think of the name "Bob" and probably the first thing that comes to mind would be the name of a person. However, a quick search on the internet would give "Bob" a series of different meanings that can range from a hairstyle to a coin used in the UK to a short abrupt motion, amongst many other definitions. The English language is rather complex in this instance, where a single word carries many different meanings. 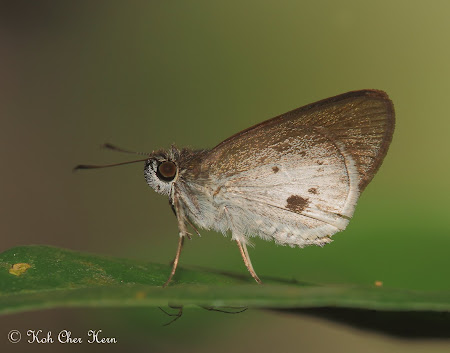 But the subject of this article focuses on our butterflies, and the several species that carry the name "Bob". Interestingly, the majority of species that I have come across that are called "Bob" are in the family Hesperiidae (or Skippers). It would be interesting to find out what the intent of the origins of the name "Bob" for these skippers. Was it because of the way they fly? Or perhaps their size? We will never know for sure. Nevertheless, in Singapore, we have 4 species of skippers with the name Bob.
1) Chestnut Bob (Iambrix salsala salsala) 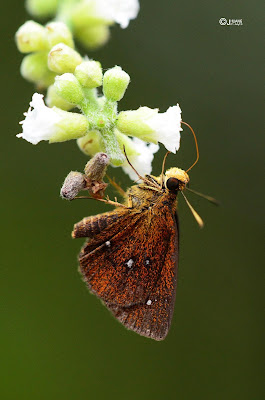 The Chestnut Bob is a common butterfly that is quite widespread in distribution across Singapore. It is more often found in urban parks and gardens flying low but rapidly around open grassy patches, but can also be found at the fringes of nature parks amongst the low shrubbery. It often stops to sunbathe in the typical skipper pose with the hindwings opened flat whilst the forewings are held open at an angle. 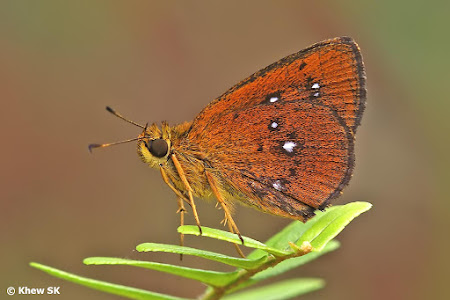 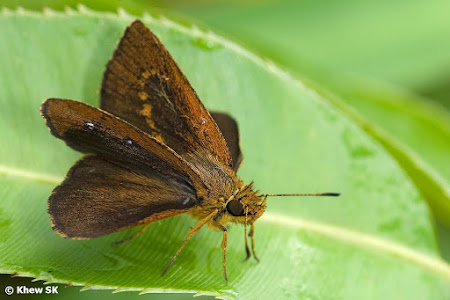 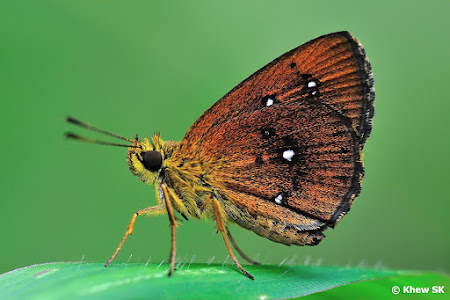 The species is dark brown on its uppersides with a paler post-discal band in the male, and white spots in the female on the forewing. The underside is a reddish brown with a series of silvery-white spots on both wings. The butterfly is small, with a wingspan of about 25-30mm and flies rapidly. The caterpillar of this species feeds on the Common Cow Grass (Axonopus compressus) amongst other varieties of grasses.
2) Starry Bob (Iambrix stellifer) 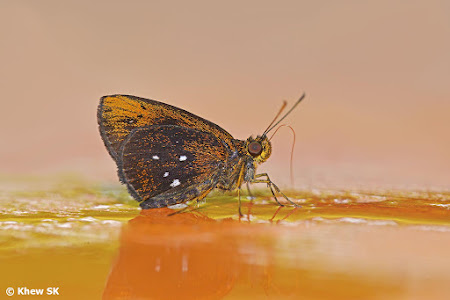 The Starry Bob (or Malayan Chestnut Bob) superficially resembles the Chestnut Bob. It is, however, a forest-dependent species and is rarely found outside the forested nature reserves in Singapore. It flight and habits also mirrors its more common cousin. Within the nature reserves, it is regularly found feeding on the flowers of the Bandicoot Berry (Leea indica). 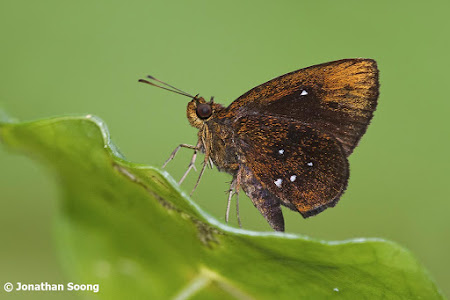 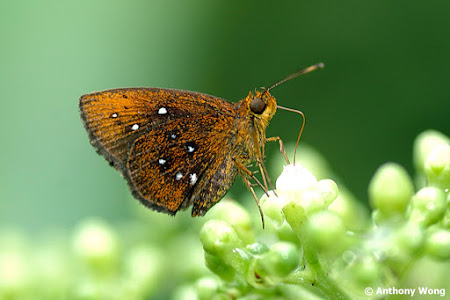 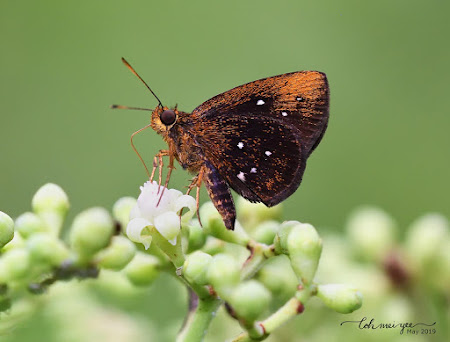 The upperside of the Starry Bob is dark brown and unmarked. On the underside, it appears reddish brown but has an orange-speckled appearance, particularly on the forewing apical area and the basal area of the hindwing. Like the Chestnut Bob, both wings feature a series of silvery-white spots except for the diagnostic white spot in space 5 of the hindwing, which is placed between the cell end and termen.
3) Palm Bob (Suastus gremius gremius) 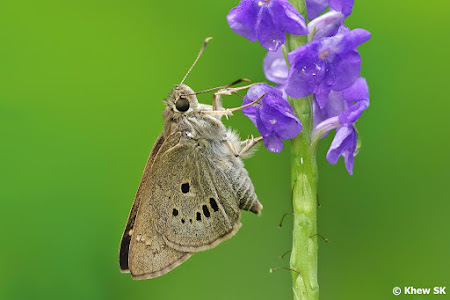 The Palm Bob (or Indian Palm Bob) was recorded as a new discovery for Singapore when it was added to the checklist of butterflies in Singapore in the 1990's. Back then, reference books described the species as "very rare" and confined to only mangrove areas in northern Malaysia. Perhaps in those years, the species had just made its appearance from India through Thailand and was uncommon. 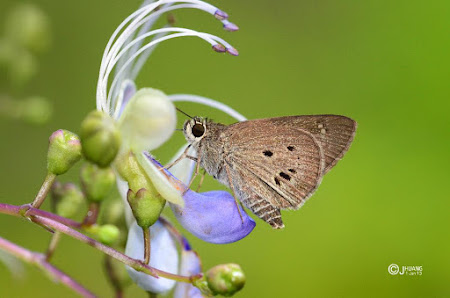 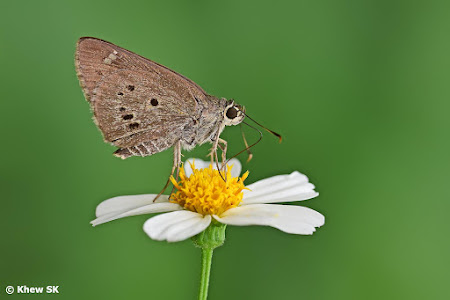 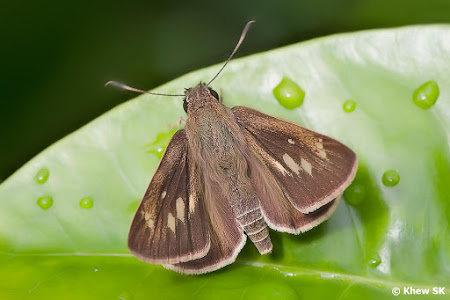 Today, the species is widespread and common in parks and gardens. A medium brown butterfly, there are a few large yellowish-white spots on the wings on the forewing above. The underside is a paler brown, and overlaid with buff scaling with a number of sharply defined discal black spots. The caterpillars of this species feeds on a variety of palms, a few of which are ornamental palms that are commonly used in urban landscaping.
4) White Palm Bob (Suastus everyx everyx) 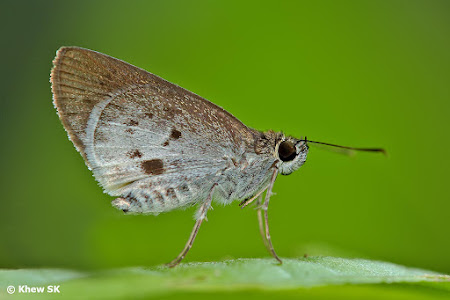 Again another new discovery to Singapore when it was recorded, the White Palm Bob is rare and confined to the forested areas of our nature reserves. Being a small and insignificant species, usually spotted hiding amongst undergrowth in heavily shaded forests, the White Palm Bob may have been missed by the early authors. It is skittish and a fast-flyer, but often stops to rest with its wings folded upright. It has been observed to puddle at damp muddy areas and also on bird droppings. 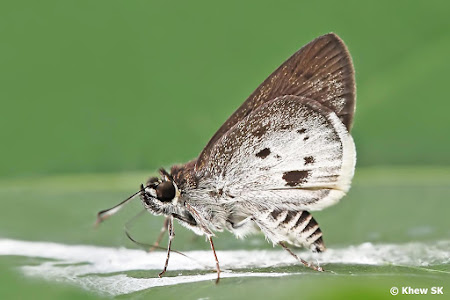 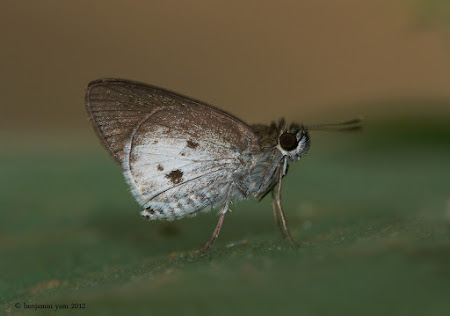 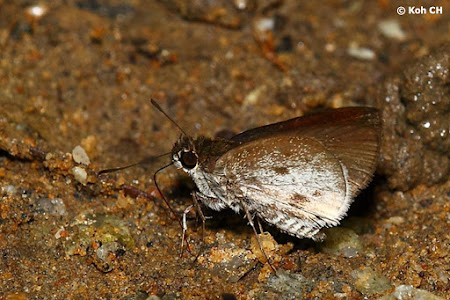 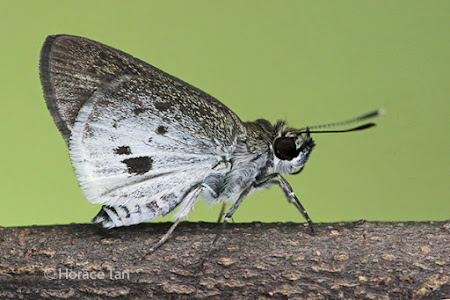 The species is dark brown above and unmarked, except for a narrow whitened area at the tornus of the hindwing. The underside is a lighter brown and the hindwing is largely whitened. There are a few black spots on the hindwing of which there is one large submarginal spot at space 2 of the hindwing. The caterpillars of this species feeds on a type of thorny palm that is normally found in forested areas.
Text by Khew SK : Photos by Huang CJ, Khew SK, Koh CH, Loh MY, Jonathan Soong, Horace Tan, Anthony Wong and Benjamin Yam


This article is dedicated to one of ButterflyCircle's veteran member, "Uncle" Bob Cheong, who is taking a break from butterfly photography due to a personal domestic issue. We hope that Bob will return soon to our beloved butterflies and share his awesome photos that have been a source of enjoyment for many of his fans.