Butterfly of the Month - October 2020 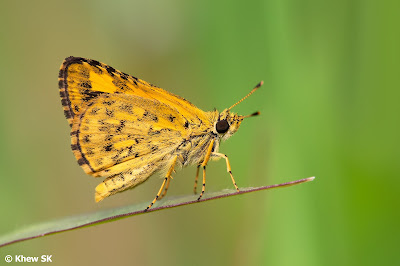 A Bush Hopper perched on a grass blade
We trudge cautiously towards the end of 2020, not knowing what is around the corner in a year that has thrown so many unpleasant surprises at us. For once, there is a universal acceptance of each country's unique misfortunes whenever the word "pandemic" is mentioned. Everyone will nod with complete understanding of the situation, as the whole world probably knows the word COVID-19 by now and the havoc it has wreaked on everyones' lives. 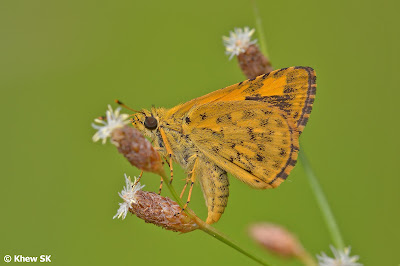 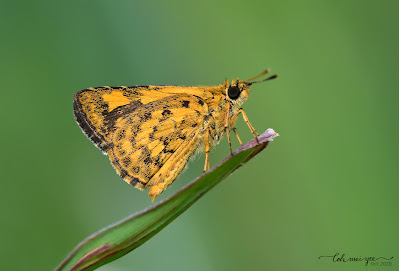 The situation in Singapore appears to have turned the corner, as the number of infections in the community has fallen to single digits for a few days now. But that is because our little island is still very much "locked" down, with minimal travel into Singapore, and strict measures in place for community interactions. Life has take a very different outlook now, as wearing a face mask has become the default for everyone, whenever we step outside our homes. 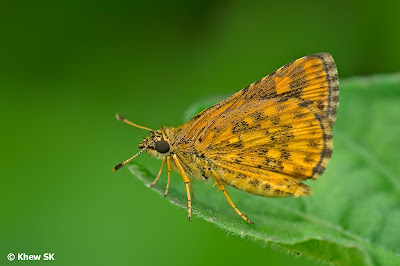 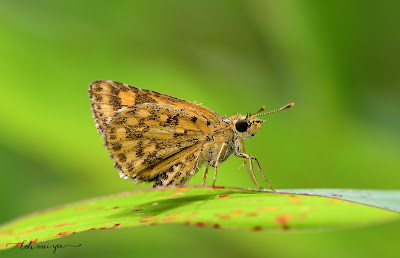 But nothing can be taken for granted on a very compact island where residents are "crammed" into a 720 sq km island, and where the population density per sq m is one of the highest in the world. Like many countries that have somewhat managed to contain the pandemic to low numbers of infections, the prospects of borders re-opening and inter-country travels start again will be something to watch out for, and be concerned about. 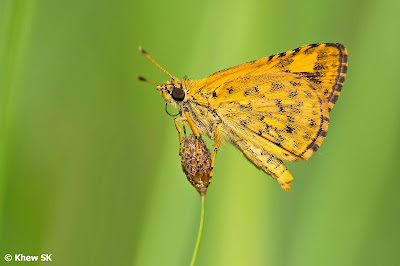 A Bush Hopper perched on a grass flower
Our outdoor spaces like parks and nature areas in Singapore are more heavily used than I can ever remember in recent times. Even the outlying parks that are usually peaceful and quiet are seeing unprecedented visitorship with local residents thronging these public amenities as travel is curtailed and most residents are looking for new places to go to get their fair dose of fresh air and sunshine. 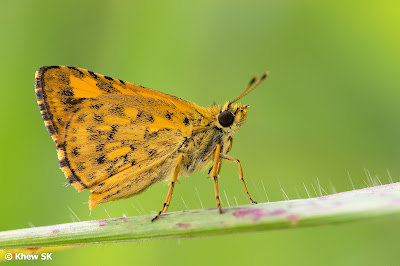 As we move into a much-anticipated "Phase 3" of the progressive easing of the safety measures, residents are looking forward to a new norm of social interaction, with lots of controls in place to minimise cross-infections in the community. But with every policy, every procedure is a learning journey, and things will continue to evolve and residents will have to adjust to the life with COVID-19 in our midst. 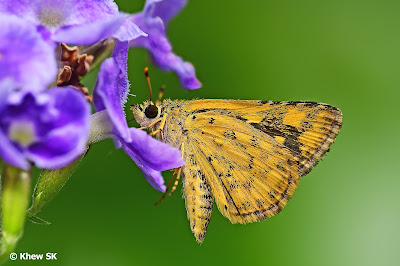 A Bush Hopper feeding at the purple flower of Duranta sp
Our Butterfly of the Month for October 2020 is a tiny inconspicuous skipper from the sub-family Hesperiinae. The Bush Hopper (Ampittia dioscorides camertes) is a predominantly orange-and-black skipper that has a wingspan that rarely exceeds 20mm across from wingtip to wingtip. Whilst it is considered only moderately common, it can be found quite regularly in its preferred habitats of grassy open areas in urban parks and gardens. 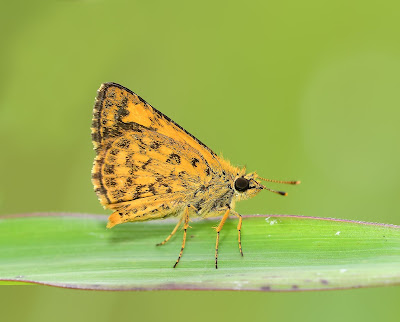 The Bush Hopper is a small butterfly, and may often be missed by observers due to its diminutive size. It flies rapidly, and is usually seen in the company of other skippers like the Lesser Dart and Small Branded Swift in urban parks. Whilst it stops with its wings in the usual skipper pose, it has an interesting behaviour of keeping its wings in motion, opening and closing its wings when it perches to rest, unlike the similar looking Darts (or Potanthus spp). 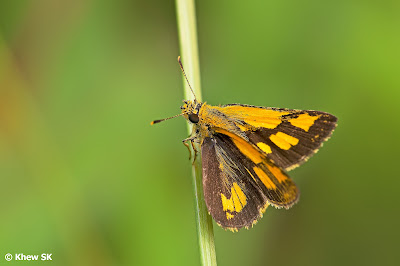 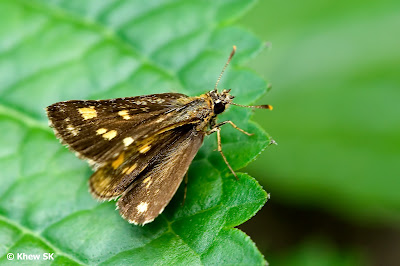 The male Bush Hopper (top) has more extensive orange markings on the uppersides whilst the female (bottom) is more brown in appearance with reduced orange-beige spots
The male Bush Hopper is dark brown with generous orange-yellow markings above. The orange markings are arranged with a broad stripe in the cell and large conjoined subapical and postdiscal spots. The paler brown female has smaller and much reduced spots on her wings, and the spots are generally lighter orange in colour. 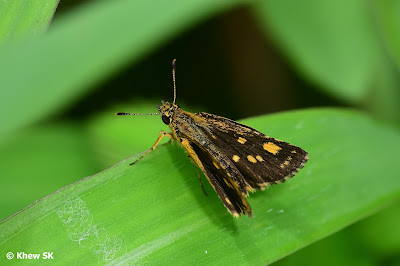 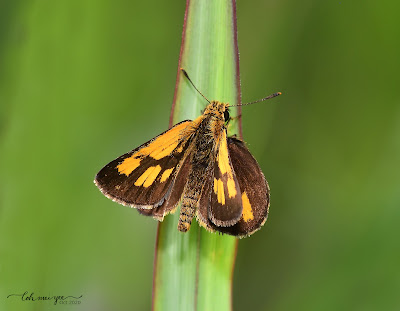 The underside is light orange-brown with the markings giving a more chequered appearance, especially on the hindwings. In pristine individuals, the cilia on the margins of both wings are chequered. The antennae lacks the typical prominent apiculus (or hook at the clubbed tip of the antennae) such that the Bush Hopper almost resembles the Taractrocera genus of skippers. 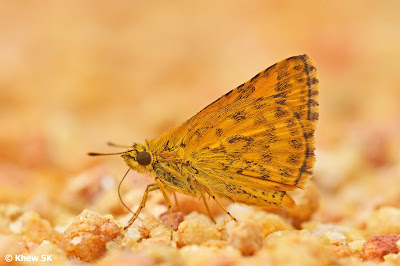 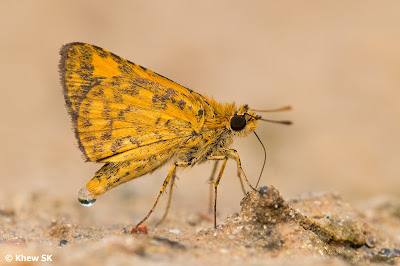 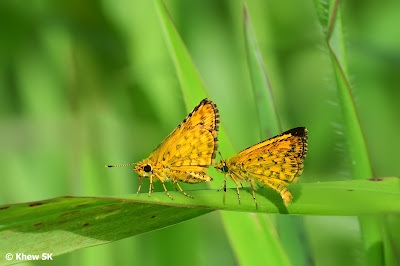 A courting pair of Bush Hoppers. Female (Left) and Male (Right)
Although its life history has not yet been successfully documented yet, its caterpillars are highly likely to feed on common species of grasses (Poaceae) found in areas where the butterfly is often seen - sometimes in numbers. Both the males and females are equally common in localised areas where they are observed.
Text by Khew SK : Photos by Khew SK and Loh MY
Posted by Commander at 4:52 PM 0 comments