The Junonia species are very susceptible to seasonal variation and often occur in both wet- and dry- season 'forms' In the latter, the underside has a cryptic pattern resembling a dead leaf and reduced ocelli.

The caterpillars of the Pansies tend to feed on species of Acanthaceae.

In Singapore, the four species can be considered common, perhaps with the exception of the Grey Pansy, which tends to be seasonally seen. Of the four, the Chocolate Pansy is by far the commonest species, occuring in the most varied habitats from urban grassland to forested areas of the nature reserves.

All four species tend to prefer open grassy areas and are most active in full sunshine. They also tend to be territorial, often returning to their favourite perches and chasing any other butterfly that comes within its 'circle of control'. They have a habit of frolicking with another individual of the same species, or engaging in aerial 'dog-fights' with each other. 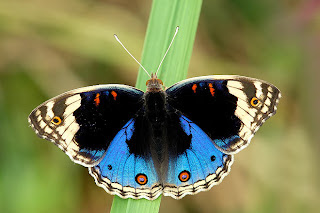 The male of the Blue Pansy is considered the prettiest and most colourful of all the four Pansies. The forewing is black, with a whitish subapical band, post-discal ocelli. The hindwing is a bright blue with an orange-red subtornal ocellus. The female is more sombre, usually featuring only brown uppersides, and occasionaly sporting a reduced patch of blue on its hindwings as compared with the males. The females' hindwing ocelli are generally much larger than those of the males. The undersides are a pale greyish brown, with cryptic markings and ocelli.


The butterfly is common in parks, gardens and open grassy wasteland and flies in an able gliding fashion. It often stops with its wings open flat to sunbathe in the sunshine. 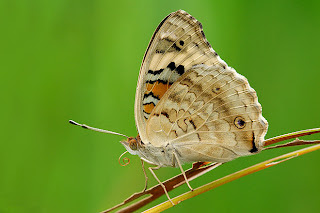 It has been bred on the very common and abundant secondary vegetation species of Acanthaceae, the Common Asystasia (Asystasia gangetica). It is highly likely that it has alternative host plants.
The Chocolate Pansy (Junonia hedonia ida) 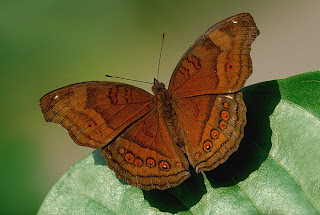 The Chocolate Pansy is the most common species amongst the four Pansies. It is a reddish brown above and features a prominent row of post-discal spots on both wings. The undersides are a lighter brown, with pale purplish bands on both wings. The post-discal ocelli on the undersides are much lighter, more orange than reddish-brown ocelli on the uppersides. The median stripe on the underside of both wings gives it the butterfly a leaf-like appearance when it stops to rest amongst leaf litter, rendering it some measure of camouflage from predators. 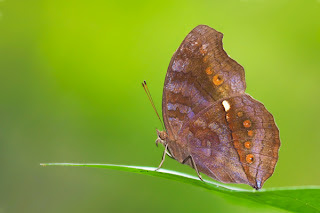 The caterpillars have been bred on a dimunitive weed, Ruellia repens which is common in open fields and cultivated areas. It is also likely that the species has other alternative host plants.

Posted by Commander at 9:17 PM 0 comments