Two Additions to the Singapore Checklist 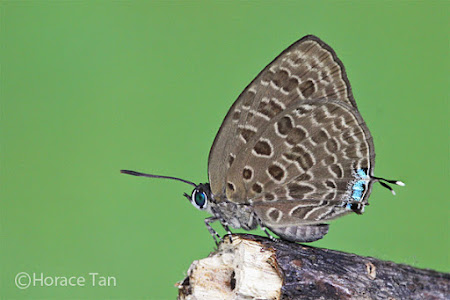 Over the years, there have been several additions to the Singapore Checklist of species that have either been seasonal visitors or some that have established viable colonies to be considered permanent residents in Singapore. In the families Lycaenidae and Hesperiidae, there are many lookalike species where just field shots of butterflies may prove challenging to identify. 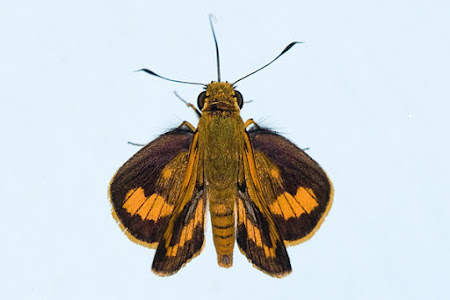 This is where voucher specimens are required, or where opportunities arise, the documentation of the early stages of the butterfly can help to confidently identify the species. In this series of updates to the Singapore checklist, we feature a total of six new species that have taken time to reliably identify these butterflies. In this article, we feature two species that will now be added to the Singapore Checklist. 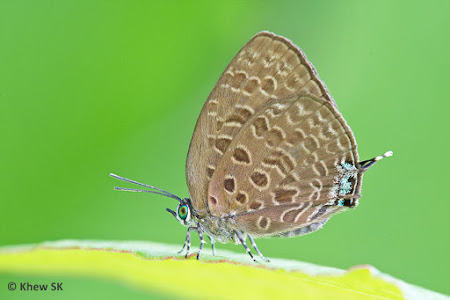 The first is a species from the genus Arhopala, a group of butterflies that are extremely challenging to identify from field shots alone. In several cases, the variability of the species in terms of its physical diagnostic features makes it even more difficult to ID the species accurately. At times, both the upper and under side of the butterfly's wings need to be examined for a higher level of certainty of the ID. 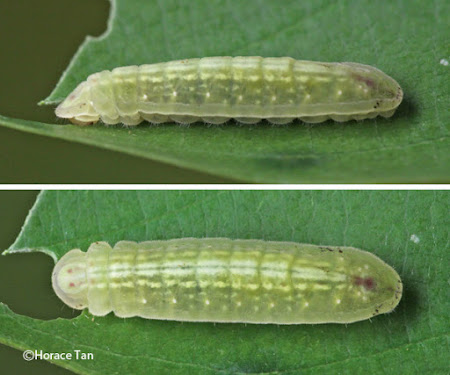 In the case of the Purple Broken-Band Oakblue (Arhopala alitaeus pardenas) the life history was documented and several voucher specimens examined before we recorded this as an extant species in Singapore. This species belongs to the alitaeus group of which there are at least nine species in Malaysia and Singapore. The diagnostic features to separate them require close scrutiny of specimens. 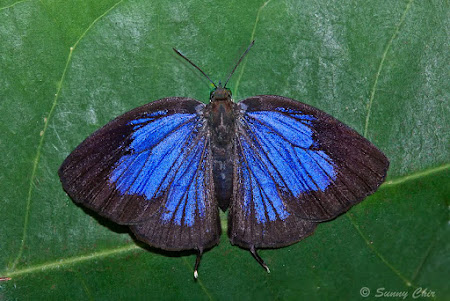 Based on the literature and records in C&P4*, two species of the alitaeus group, A. pseudomuta and A. alitaeus are extant in Singapore. All the others are found in Malaysia and a few subspecies are isolated to the island of Langkawi. With the voucher specimens and scrutiny of the diagnosic features, we now have a higher confidence to record A. alitaeus pardenas as a re-discovery in Singapore.

The Purple Broken-Band Oakblue (this name was taken from Pisuth's Butterflies of Thailand Book) is described as having a weak purplish glaze on the underside of its wings. On the upperside, the male has a consistent 1.0 mm wide border and having more annular (curved or somewhat round in shape rather than jagged) markings on the underside. The female has a broad black border on both the fore- and hindwings.

On the forewing underside, there is a spot at the base of space 10. The post-discal spot in space 6 of the hindwing is rounded and overlaps the cell-end bar. The submarginal spots on the hindwing are individual spots versus band-like in the Raffles' Oakblue (A. pseudomuta). 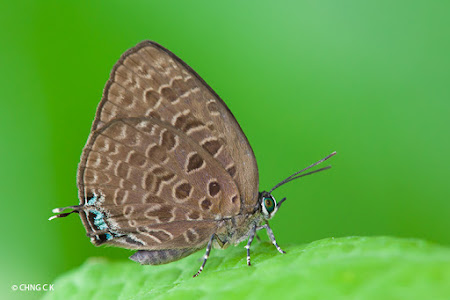 With voucher specimens and early stages record, we now document this as a re-discovery and add the Purple Broken-Band Oakblue (Arhopala alitaeus pardenas) as species #319 in the Singapore Checklist. 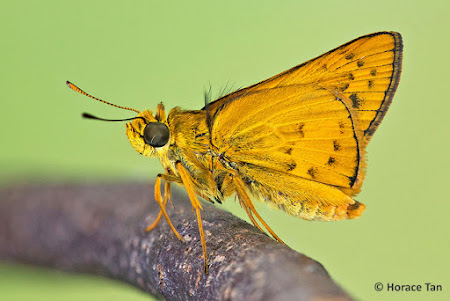 The second species to be recorded as a new discovery is the Linna Palm Dart (Telicota linna). This species was not included in the early authors' checklists. Even as early as back in 2007, Horace Tan, our early stages expert, had bred this species on Bambusae, but identification at that point was lumped together with the extant species, T. augias. Dr TL Seow, our resident expert, had then tentatively identified it as T. ohara, another allied species due to the lack of a proper set specimen to refer to. 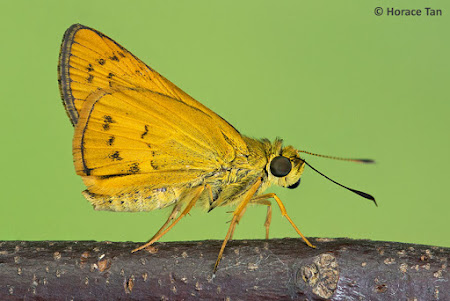 There was another amateur who claims to have recorded this species three years later in 2010, but was not a trustworthy source as he had shown a propensity for posting untruths and slanderous accusations under fake accounts. It is also curious as to whether this character possessed the proper permits from NParks to take material out of areas under the legal jurisdiction of the Singapore authorities. It is regrettable that this unfortunate individual set up a so-called blog (obviously not credible nor widely read) to resort to his mud-slinging activities. 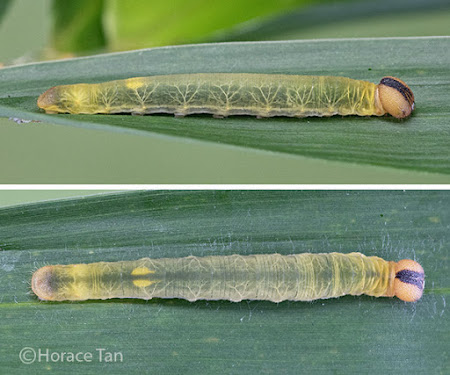 In recent years, Horace Tan had further opportunities to breed this species and several more voucher specimens were obtained for closer scrutiny. Based on the observations done by Dr Seow, the clues to identifying this species and to distinguish it from the other 3 Singapore-extant lookalikes - T, besta, T. augias and T. colon, are the following features :


It should be noted that for many of these lookalike species, the ID keys need to be combined with other diagnostic features and should not be used in isolation. For example for the characteristic in the male where the base of space 2 is black, this feature is also present in the Malaysian species of T. ohara, T. bambusae and T. hilda. All of these species have yet to be observed in Singapore, although there is no particular reason why they will not appear here in future. 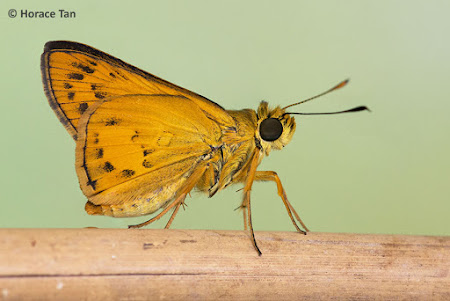 With the voucher specimens available, we now record the Linna Palm Dart (Telicota linna) as species #320 in the Singapore Checklist. From 2015, ButterflyCircle has been working with the Lee Kong Chian Natural History Museum by supplying DNA material to set up a DNA barcode database for Singapore butterfly specimens. This is to ensure that the DNA data will be available for future reference when the technology is more conducive for the use of DNA to reliably identify butterflies. 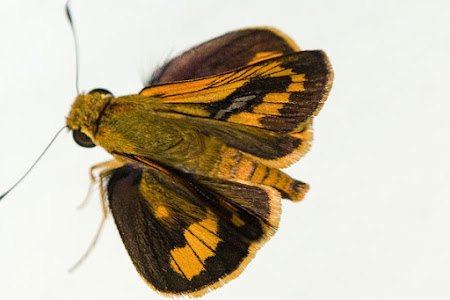 There are currently no fewer than 10 species that are still under investigation and for which voucher specimens are being sought to validate the identity of these butterflies. These are mainly lookalike species in the Lycaenidae and Hesperiidae families. In a forthcoming blog article, we will feature two more Lycaenidae species that will be added to the Singapore Checklist.
Text by Khew SK : Photos by Sunny Chir, Chng CK, Huang CJ, Khew SK and Horace Tan

Special thanks to Horace Tan for his patience and effort in documenting the early stages of these species and to Dr TL Seow for his persistence in scrutinising the voucher specimens to identify the species with a high level of confidence.
References :

Posted by Commander at 2:00 PM 1 comments